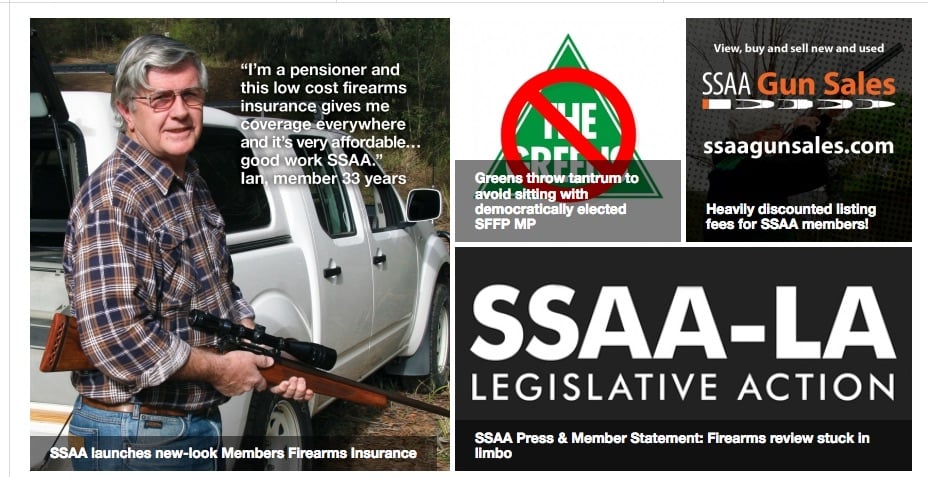 The Sporting Shooters’ Association of Australia has become one of the country’s wealthiest hobby clubs, as a result of Australia’s widely acclaimed gun control laws, according to an investigation by a leading gun control researcher, Associate Professor Philip Alpers.

His findings raise worrying questions about the implications for future public policy of these multi-million dollar “war chests”.

Of all Australia’s public health initiatives, our gun control laws are perhaps the most widely recognised and cited with pride. Yet they also contain the seed of their own destruction.

Since 1996, each applicant for a firearm licence must prove a ‘genuine reason‘ for gun ownership. That’s no problem for some: primary production, for example, is listed as sufficient reason. But for many thousands of urban and other firearm owners, the only ‘genuine reason’ which fits is to join an approved shooting club.

Gun owners who fail to turn up for the mandated minimum number of club attendances each year risk losing their firearm licence, and shooting clubs have both a legal obligation and a financial incentive to dob in non-attenders.

This has obvious benefits for public health. Gun clubs can mentor their members in firearm safety and the law, while keeping an eye on careless, troubled or suspicious firearm owners. Pistol clubs have an added responsibility to approve, or to block a new member’s application for a licence to possess a handgun. Such arrangements effectively outsource official responsibilities in the public interest.

Meanwhile, the hazards to governance and to this country’s limits on the proliferation of firearms are more ideological and political. Gun clubs enshrine in our society a core pledge of shooters, which is to introduce children to firearms as early as possible. Most shooters’ appeals for political, financial or public support come cloaked in the name of youth safety education.

But perhaps more importantly, the majority of Australia’s hundreds of shooting clubs are run by a single special interest group. (Note from Croakey, this sentence was amended on 9 December to add the phrase, “the majority of”). In the 20 years since John Howard’s gun laws took effect, that group has cornered a multi-million-dollar levy on citizens who lack any other ‘genuine reason’ to own a gun.

The SSAA is now one of the country’s wealthiest hobby clubs, guaranteed an uncapped income in perpetuity from a government tax on shooters.

Annual financial returns gathered from the Registrar of Incorporated Associations in seven states and territories (WA does not require financial disclosure) document the long-term accumulation of wealth funnelled by state and territory regulations to the SSAA.

From 50,000 members in 1996, the 400 SSAA shooting clubs have shot to a national membership of 180,000 gun owners, many compelled by law to pay an annual fee, then to shoot with politically committed enthusiasts several times each year.

As the SSAA remains overtly determined to wind back John Howard’s gun laws – and in concert with the Shooter’s Party has already succeeded to some degree in every state and territory – it’s easy to see hundreds of gun clubs acting as ideological training camps. Some members of the fraternity have been shown shooting at targets of gun control advocates and politicians.

Today, just seven top SSAA branches declare income of $20 million and net assets of $34 million, while the national branch alone collects $10 million in annual fees. That’s more than double the assets of Swimming Australia, and nine-tenths the income of Athletics Australia. In its most recent publicly available financial return, SSAA National in Adelaide reported an accumulated war chest of $6 million in cash.

The largest SSAA state branches have done even better. For 2015, SSAA (VIC) reported $4.4 million in revenue and assets of $5 million. Adjusted for inflation, branch assets have increased 559% in value since the 1996 gun laws.

SSAA (NSW) reported income of $2.4 million with assets of $7.2 million (up 717%), while SSAA (QLD) collected income of $5 million and holds assets of $15.7 million, of which $8.3 million are in cash. Adjusted for inflation, Queensland branch assets have increased by 2,675% since compulsory gun club membership was written into legislation.

As the law sets no limit on shooting club fees, the SSAA can charge whatever it likes. Annual membership currently costs $87 for an individual, although family discounts and life memberships reduce the national total. Many clubs impose additional levies for the use of facilities.

Politicians who, for example, dismantled compulsory student union membership on ideological grounds might be asked how this system is not a government-mandated tax on shooters, with no upper limit.

They could also consider the future implications of several swelling war chests worth many millions of dollars, amassed to overturn gun laws agreed 20 years ago by all major parties.

• Associate Professor Philip Alpers is founding director of GunPolicy.org, a global project of the Sydney School of Public Health which compares armed violence, firearm injury prevention and gun law across 350 jurisdictions world-wide. Accredited to the United Nations small arms Programme of Action since 2001, he participates in the UN process as a member of the Australian government delegation. Philip Alpers is recognised among the ‘Top 100: The most influential people in armed violence reduction’ compiled by the peak international NGO in this field. Some of his recent research is available here.