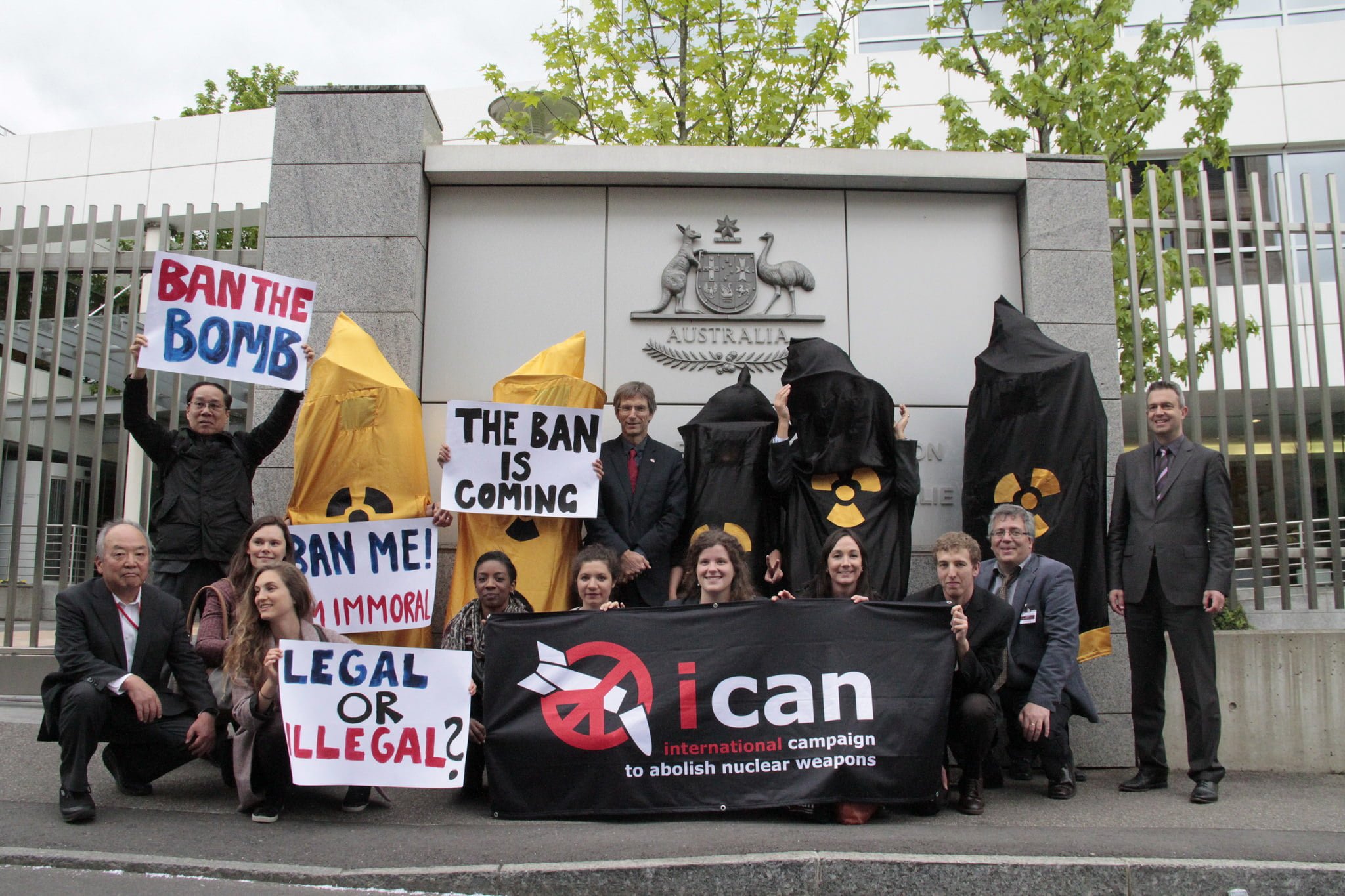 **WARNING: Aboriginal and Torres Strait Islander readers are warned that this article contains the name and image of a deceased person **

Last week’s announcement that the 2017 Nobel Peace Prize had been awarded to the International Campaign to Abolish Nuclear Weapons was a huge homegrown honour, with the global alliance founded by a group of physicians and activists in Melbourne just a decade ago.

Thus there’s been disappointment that Prime Minister Malcolm Turnbull has failed to offer his congratulations to ICAN and its early founders here, even while the Australian Government actively boycotted negotiations spurred by ICAN for the UN to adopt an historic nuclear weapons ban treaty in July. 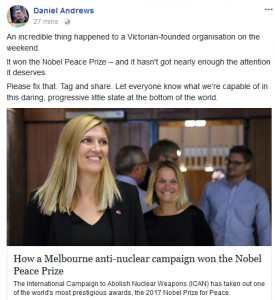 The article below by ICAN co-founders Associate Professor Tilman Ruff and Dimity Hawkins, originally published at The Conversation, traces the development of ICAN following a call by Malaysian obstetrician and former co-president of International Physicians for the Prevention of Nuclear War (IPPNW) Ron McCoy that “struck a deep chord in Melbourne among colleagues active in the medical, peace and nuclear-free movements”.

Croakey readers might also be interested to read this earlier tribute by Ruff to fellow ICAN founder Dr Bill Williams, a Victorian GP and leading figure in the Medical Association for Prevention of War (MAPW) and the International Physicians for the Prevention of Nuclear War who died suddenly last year, and this tribute by Dave Sweeney to Yankunytjatjara Elder, activist and leader Yami Lester who became a reluctant public figure after being blinded by the British nuclear tests in the 1950s, when he was just a child.

Disclaimer: Marie McInerney is a former ICAN Australia board member and has provided freelance media/communications services for the organisation.

On Friday, the International Campaign to Abolish Nuclear Weapons (ICAN) was awarded the 2017 Nobel Peace Prize, “for its work to draw attention to the catastrophic humanitarian consequences of any use of nuclear weapons and for its ground-breaking efforts to achieve a treaty-based prohibition of such weapons”.

The prize comes after ICAN played a pivotal role in an historic UN treaty prohibiting nuclear weapons. The treaty was adopted in July by an overwhelming vote of 122 to one. ICAN was the driving force behind it, working closely with governments to get it over the line.

The treaty’s significance lies in its power to influence governments: those that actually support nuclear disarmament will sign it; those that don’t will be shown to be insincere in their disarmament rhetoric.

Malaysian obstetrician and former co-president of International Physicians for the Prevention of Nuclear War (IPPNW) Ron McCoy first proposed the idea of ICAN in 2005.

McCoy put out a call to colleagues through IPPNW advocating “lateral thinking and a new approach to nuclear disarmament”. He wrote:

We can call it an International Campaign to Abolish Nuclear Weapons, with the acronym ICAN. Let’s start working on this right now.

The idea struck a deep chord in Melbourne among colleagues active in the medical, peace and nuclear-free movements.

We hatched a plan to build a broad campaign coalition of diverse partner organisations around the world with a clear compelling goal – one that is working for biological and chemical weapons, cluster munitions and landmines: a comprehensive, binding treaty to prohibit nuclear weapons and provide for their elimination.

We knew that it needed to be global, to engage young people, and to be rooted in the unacceptability of nuclear weapons – the catastrophic indiscriminate consequences that would inevitably follow any use.

We needed to include and provide a platform for the courageous voices of survivors of nuclear weapons use and testing. They tell the human story of lived transgenerational suffering of people under the mushroom cloud, and they are the most compelling advocates that what happened to them must never again happen to anyone, anywhere.

And we needed money. At the first meeting with the Poola Foundation in early 2006 in Leicester Street, Carlton, they could see merit in an idea that seemed wildly optimistic to many, and their confidence in us was empowering.

Our co-founder, Bill Williams, sadly passed away before he could celebrate the wonderful developments of this year with us. But it was Williams who so eloquently summed up our brief, saying:

We need a determined worldwide movement to outlaw and abolish nukes. To get there in this generation, we need to build the wave of public opinion into a mighty crescendo: a massive, surging, irresistible force which carries us all the way to absolutely zero nukes. Without it, even the most inspirational of leaders will falter on the way.

Building a movement from the ground up

From the outset we were up against the harsh reality that none of the nuclear-armed countries were serious about fulfilling their binding obligation to disarm. In fact, they were doing the opposite.

Many of these countries were arguing that conditions were not right to disarm, and they were investing more than US$100 billion per year in modernising their nuclear arsenals, making them more accurate, deadly and “usable”.

So, a game-changing breakthrough needed to come from the countries without the weapons. Most of them were despairing and frustrated about being indefinitely held under a nuclear threat by governments that refused to fulfil a legally binding disarmament commitment they made under the Nuclear Nonproliferation Treaty, which had been in force since 1970.

Governments that don’t possess nuclear weapons can’t eliminate them. So what’s the most feasible significant step they could take? Fill the legal gap that sees the worst of all weapons, the only ones that pose an existential threat to all humanity, the only weapons of mass destruction not yet outlawed.

Read more: Australia must sign the prohibition on nuclear weapons: here’s why

With or without nuclear-armed and dependent countries, they could ban nuclear weapons under international law. Thus, by 2010, ICAN strategy had sharpened around a nuclear weapons ban treaty as the next best step that could be taken.

Taking it to Europe and beyond

Towards the end of 2010, an office was established in Oslo. In the same year ICAN secured an initial grant from the Norwegian government to establish an international campaign office in Geneva, reaching out to the Middle East and Africa.

Through ICAN and partners across the globe, survivors’ voices were joined by the many voices of those who would not have their suffering happen again – medicos, scientists, legal experts, artists, witnesses, thinkers, campaigners, spiritual leaders and defence experts.

When a majority of the world’s governments came together earlier this year to negotiate the Treaty on the Prohibition of Nuclear Weapons, ICAN campaigners across the globe stood strong alongside the International Red Cross and the Red Crescent movement and other partners to ensure the formation of the strongest treaty possible.

When that treaty opened for signature on September 20, 2017, many of us here in Australia sat up late into the night watching the ceremony live-streamed from the UN. And now, just weeks later, the announcement of the Nobel Peace Prize has swept the work into high profile and sharp focus.

The work of ICAN isn’t over

ICAN was always intended to be a coalescing, not a reinvention. From the first use of nuclear weapons in 1945 to today, millions of people have worked to eliminate them.

The hard work of pushing for the elimination of nuclear weapons must not only continue but ramp up. The new treaty provides a powerful tool in this work, and the opposition of the nuclear-armed and dependent countries to the treaty is the strongest evidence that the treaty matters and cannot be ignored.

The Nobel Peace Prize shines a bright light on the urgent unfinished business of getting nuclear weapons off the table. It is a huge shot in the arm, and encouragement for governments to sign and ratify the treaty and then implement it, and for people around the world to press their governments to do so.

It could not have come at a better or more urgent time.