Home The Croakey Archives Croakey Conference News Service 2013 – 2019 2019 Conferences #ACEM19 How to save the world from climate catastrophe? Listen to this doctor from Tuvalu… 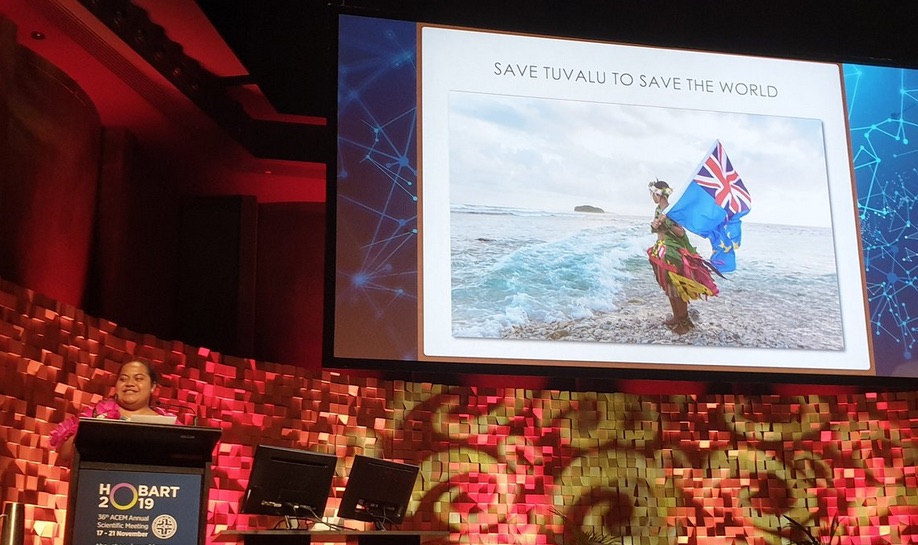 How to save the world from climate catastrophe? Listen to this doctor from Tuvalu…

Introduction by Croakey: A concerted focus on the climate crisis at the recent Australasian College for Emergency Medicine conference was timely, with two new reports subsequently highlighting the urgency of concerns raised.

The United Nations Environment Programme has documented a continuing increase in greenhouse gas emissions (as per the graph below), and issued a stark warning that radical transformation is required to produce deep and urgent cuts to emissions.

Even if all Nationally Determined Contributions under the Paris Agreement are implemented, the UNEP Emissions Gap Report 2019 finds that we are still on course for a 3.2°C temperature rise by the end of the century.

The report, which includes Australia among the countries that need to do much more, says:

Our collective failure to act strongly and early means that we must now implement deep and urgent cuts. 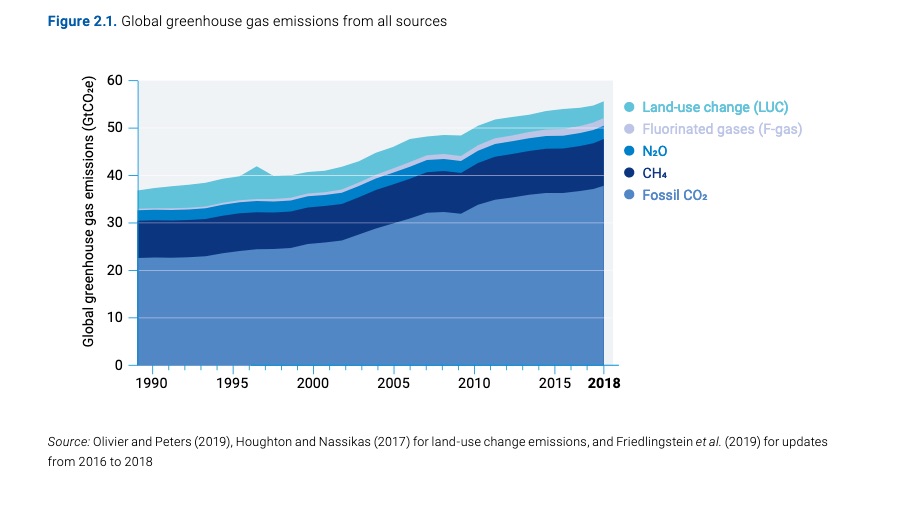 Meanwhile, scientists from the UK, Germany, Sweden, Denmark, and Australia have warned we face a “dangerous” cascade of interconnected tipping points in Earth systems, including reduction in ice in the Arctic and other regions, and permafrost thawing.

Writing in the Nature journal, in an article titled ‘Climate tipping points — too risky to bet against’, they say:

If damaging tipping cascades can occur and a global tipping point cannot be ruled out, then this is an existential threat to civilization. No amount of economic cost–benefit analysis is going to help us. We need to change our approach to the climate problem.

In our view, the evidence from tipping points alone suggests that we are in a state of planetary emergency: both the risk and urgency of the situation are acute

We argue that the intervention time left to prevent tipping could already have shrunk towards zero, whereas the reaction time to achieve net zero emissions is 30 years at best.

Hence we might already have lost control of whether tipping happens. A saving grace is that the rate at which damage accumulates from tipping — and hence the risk posed — could still be under our control to some extent.

The stability and resilience of our planet is in peril. International action — not just words — must reflect this.”

At the ACEM conference, Dr Aloima Taufilo from Tuvalu presented a powerful call for action from her lived experience, in a talk titled ‘Save Tuvalu to Save the World’, as Amy Coopes reports below for the Croakey Conference News Service.

These were the stirring sentiments shared by Dr Aloima Taufilo, Tuvalu’s first emergency medicine trainee, about living on the front-lines of climate change, in a presentation to the recent annual scientific meeting of ACEM, the Australasian College for Emergency Medicine.

Taufilo, who plans to return home to the far-flung South Pacific archipelago to work after completing her training in Fiji, told colleagues climate change was not an academic concept in Tuvalu, but a real and present danger to their homes, livelihoods and culture.

“Our traditions, our way of living, our very existence is under threat,” Taufilo told the meeting, which was themed ‘The Changing Climate of Emegency Medicine’.

“This is why we make noise. We want to survive, we need to survive, and we are helpless. Where can we run for shelter?

Taufilo’s talk, titled ‘Save Tuvalu to Save the World’, was a call to arms for colleagues following an unprecedented protest march demanding climate action on the final day of the summit in Hobart.

Immediately following her presentation, ACEM President John Bonning took to the stage to declare a climate emergency on behalf of the College, later joined by the Royal Australasian College of Physicians and the Australian College of Rural and Remote Medicine.

The emergency was unfolding in real-time in Tuvalu, Taufilo said, with rising seas engulfing the shoreline, acidification of the oceans eroding the atolls on which the tiny nation was perched, and severe tropical cyclones increasing in intensity and frequency.

“Basically, we are struggling to survive,” she said. ”This is something we live with every day, the constant fear for our survival is always there.”

The fourth-smallest and most remote nation on Earth, Tuvalu’s population of 11,000 was spread across nine coral atolls occupying a mere 26 square kilometres, with a mean elevation of just two metres above sea level, Taufilo said.

For context, she said the city of Hobart, where the meeting was being held, was some 65 times bigger than her entire country.

Historically, Taufilo said Tuvalu had experienced an average of about eight cyclones a decade, with some 35 recorded between 1969 and 2010.

In less than a year between 2015 and 2016, Taufilo said the islands were battered by two severe tropical cyclones – Pam and Ula – with significant consequences for health. Clinics were gutted, graves were unearthed and the remains of newly-buried people scattered, and food security and clean drinking water were both compromised.

Skin infections, gastrointestinal illnesses, direct injury and mental illness all spiked in the aftermath, she said.

Patients had to be evacuated – sometimes carried – from the hospital to the main government building, which at three storeys offers the highest point of refuge in Tuvalu.

When this happened, she said: “All we can do is wait and hope for the best.”

According to the United Nations Development Programme, Tuvalu is extremely vulnerable to the impacts of climate change, variability, and extreme weather events. Its wet season is characterised by tropical cyclones, while the dry season brings ever-worsening droughts.

Rising seas have made groundwater unsuitable for drinking, leaving the country dependent on rainwater, and have decreased crop yields through increased soil salinity. Inundation of low-lying areas and coastal erosion are major issues, as is the loss of marine life due to coral bleaching – both a food security and an economic issue due to the importance of the local tuna fishing industry for national revenues.

A number of mitigation projects are underway, including construction of a sea wall, community water tanks and the planting of mangroves to protect coastal areas.

But the only option that offers stability in the longer term is permanent migration, either to Kioa island in Fiji (purchased by Tuvaluan settlers at the end of Wold War Two) or New Zealand, where 75 citizens of Tuvalu are resettled annually under a lottery known as the Pacific Access Category scheme.

Way of life under threat

For most Tuvaluans, Taufilo says migration is viewed as a last resort, and a threat to traditions dating back millennia.

“Tuvalu is the place that we grew up in, why do we have to leave this place?”

Just because Tuvalu was a small country, she said there shouldn’t be an expectation that it would just yield to the wishes of larger, more developed nations.

“Even though we are small, we’re also human, we need to keep our traditions,” she said. “… a lot of us think that migration would pose a danger to our traditions and our way life.”

Though she feared for the future of her country, Taufilo said marching through the streets of Hobart with hundreds of her emergency colleagues, and seeing the College declare a climate emergency gave her hope.

The entire auditorium joined her in a traditional dance at the conclusion of her talk.

“Seeing the looks in my colleagues’ eyes and the passion they have for this, it reassures me that I am not alone in this fight for climate action,” she said.

“I will remain in my belief that we can do it. We are all human beings having the same interest in life, and I am hopeful, hopeful for the future that we can do this.” 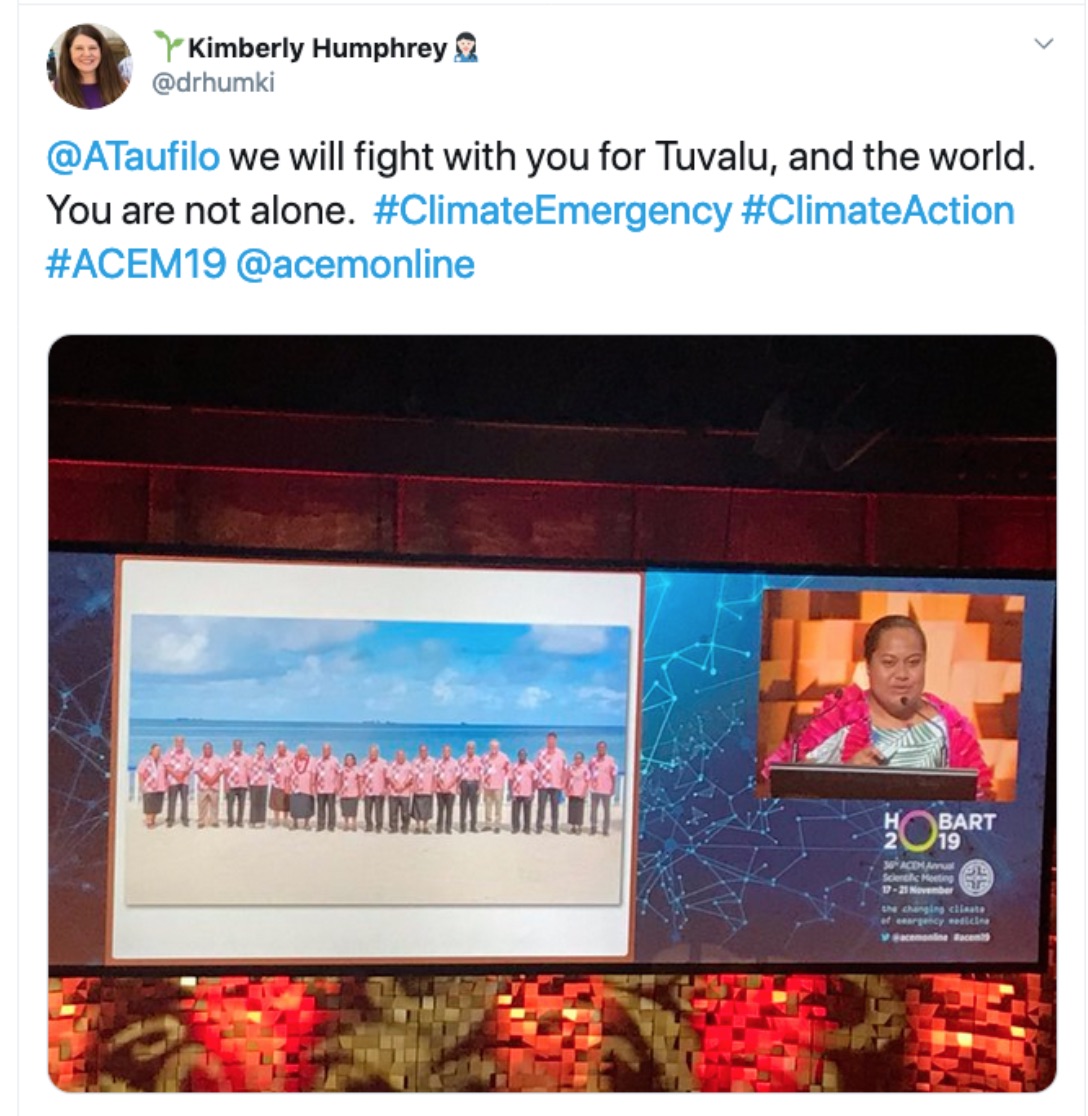 • Read this Twitter summary of Taufilo’s presentations to #ACEM19.

• Read this profile of Taufilo published by ACEM.

Watch our interview with Taufilo

Watch the auditorium in a traditional Polynesian dance

The 2019 ACEM ASM was held in Hobart from November 17-21. Amy Coopes is covering it for the Croakey Conference News Service. Read our previous ACEM ASM coverage here and here.