Home Healthcare and health reform conflicts of interest If you support stronger regulation of pharma/doctor interactions, now is the time to speak up

If you support stronger regulation of pharma/doctor interactions, now is the time to speak up

A bill has been introduced into the Senate that would restrict interactions between the pharmaceutical industry and the medical profession.

Most of the submissions to a Senate committee inquiry into the proposals have come from industry.

In the article below, Dr Ken Harvey, adjunct associate professor at La Trobe University, urges concerned members of the public and health professionals to attend a public hearing on the bill in Melbourne on Monday.

The Therapeutic Goods Amendment  (Pharmaceutical Transparency)Bill 2013 has been introduced by the health spokesperson for the Greens, Senator Richard Di Natale.

Industry views are dominating the debate

On Monday April 29, 2013 the Senate Standing Committee on Finance and Public Administration is holding a public hearing on this bill, in Melbourne, from 9:00 am to 12:45 am, at the Mantra Hotel, Conference Room 1, 222 Russell St, Melbourne.

The bill proposes to replace Medicines Australia self-regulatory code with legislation that sets more stringent restrictions on the interactions between pharmaceutical companies and physicians that minimises the opportunity to provide inducements and thereby unduly influence prescribing behaviours.

The bill forbids payment for doctors to travel or attend education seminars and scientific conferences domestically and overseas, bans the sponsorship of educational meetings intended for Australian doctors outside Australia, limits gifts and overly lavish hospitality, and requires full reporting of any fees paid to prescribers outside the company.

The terms of reference for the inquiry are ‘to receive evidence on the need for regulation of pharmaceutical industry conduct with regards to interactions with the medical profession, and the appropriateness of the provisions in the bill that place restrictions on these interactions’.

A late submission from the Department of Health and Ageing reiterates the government’s preference for self-regulation but fails to address its limitations. 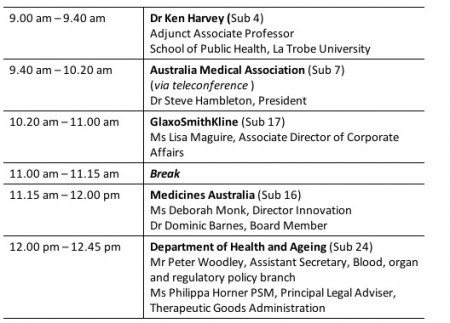 Observers attending, are asked to advise their names and designations to Christine McDonald, Secretary, FPA Committee (SEN):  FPA.SEN AT aph.gov.au.