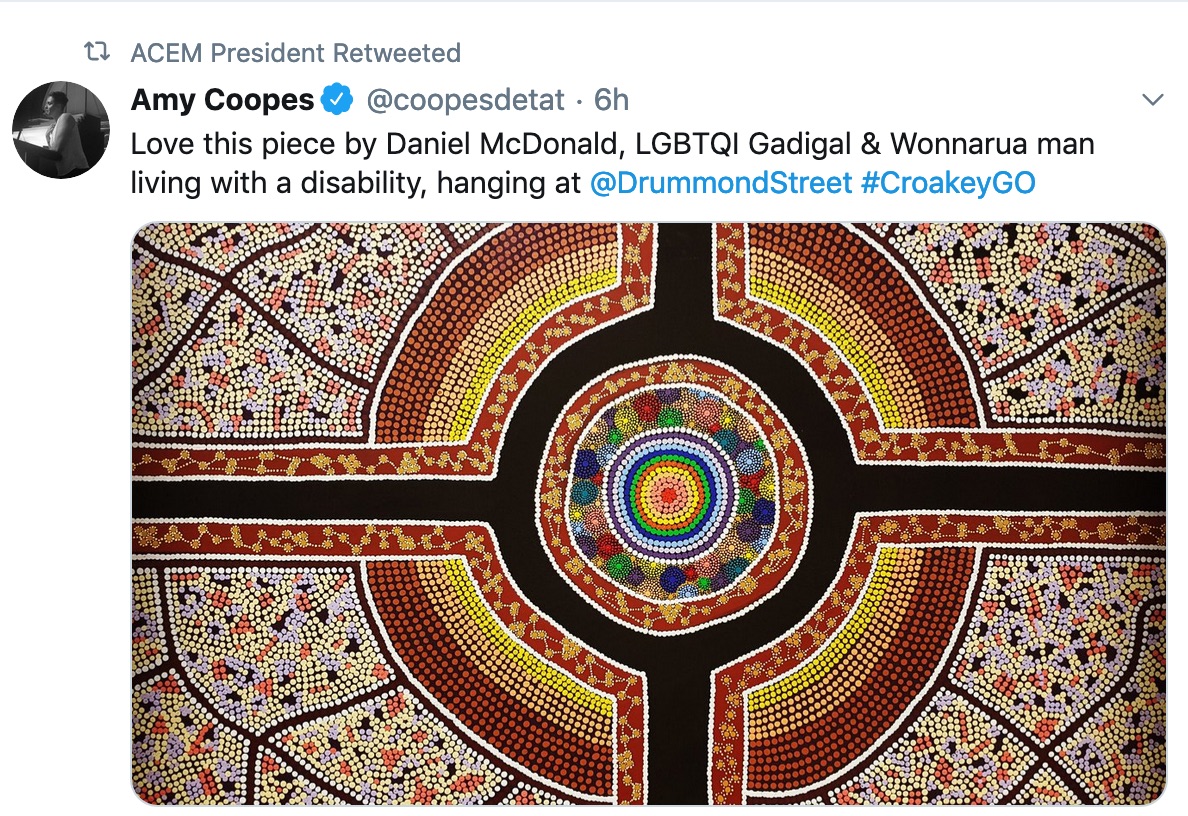 Image of an artwork by Daniel McDonald, photographed by Amy Coopes at the recent CroakeyGO in Melbourne

While this goal was welcomed by consumers and other stakeholders, many groups and experts also expressed some doubts that the government would be prepared to take the actions required to deliver on this commitment.

Issues raised by stakeholders included the need to focus not just on new services and programs but on integrating existing services to provide a coordinated and seamless pathway for consumers, regardless of their location, mental health condition or entry point into the system.

Another important issue that does not appear to be on the Minister’s agenda is the role of social determinants in mental health.

At the recent CroakeyGo, sponsored by the North Western Melbourne Primary Health Network and focussed on mental health, social determinants were central to the discussions among participants.

The failure of the Morrison Government to raise the rate of Newstart was mentioned as a clear indication of a lack of a commitment to addressing key risk factors for mental illness, such as poverty and inequality.

For example, speaking at the event, Ryan Sheales from the Victorian Council of Social Service (VCOSS) stated that this failure would work against the Federal Government’s declared commitments on mental health and suicide prevention.

“When we discuss mental health, we need to also discuss poverty and disadvantage and vice versa. We can’t look at either of them in isolation,” he said.

In the post below, Dr Sebastian Rosenberg from the Centre for Mental Health Research, Australian National University and the Brain and Mind Centre, University of Sydney, discusses the future of mental health reform in the light of Minister Hunt’s recent announcement and the draft report from the Productivity Commission’s current inquiry into mental health, expected in October.

He identifies some of the fundamental unresolved issues raised by previous inquiries and poses the questions that will need to be answered if the current agenda is to have any hope of achieving the Minister’s ambitious goal.

It’s a strange ‘calm before the storm’ kind of moment in mental health.  Minister Greg Hunt’s mental health focused presentation to the Press Club on 14 August became diluted, into a much broader 10 year vision for health in general.

Nevertheless, he committed to the development of some new partnership arrangements with the states and territories in relation to mental health, over a two year period.

And he committed to building some community mental health hubs.  It is not yet clear what service model these hubs are working to, where they will find their staff, who their clients would be and how they fit with either primary or stepped care.

The ‘storm’ I refer to is the looming draft report to be provided by the Productivity Commission. Groups such as Mental Health Australia are placing considerable stock in the Commission’s authority to trigger new and real reform in mental health.

This is not unreasonable. The Commission has had dedicated resources and some time to consider current issues in mental health, both in relation to health services and the broader social and economic context of mental illness.

This is key. Solutions to Australia’s mental health crisis won’t be found by adding some more beds to relieve emergency department blockages.

They will be found in finally generating the clinical and psychosocial support services necessary to keep people well, living and working in the community. Minister Hunt had an opportunity to commit the Commonwealth to greater action here but unfortunately left the fate of people discharged from hospital in the hands of the states and territories.

This part of the missing middle it seems will remain missing.

The challenge of implementation

John Mendoza has now collated the range of reports and inquiries into mental health going back some years and it seems as if no other area of public policy has been quite so scrutinised.  He reckons there has been an inquiry of some kind into mental health, state or federal, every 85 days for the past few decades.

While I can’t verify this, I wouldn’t argue and there are already dozens of recommendations about mental health reform made by these inquiries, lying around like rice after a wedding.

The Not For Service Report issued by the Mental Health Council of Australia and the Human Rights and Equal Opportunity Commission in 2005 made 29 recommendations.  The Australian Senate’s From Crisis to Community Report in 2006 made 13 and the National Mental Health Commission made 25 in its 2014 review.

It would be great to know what happened to these. But no such audit has ever taken place.

So, while the mental health sector and the Australian community more broadly await the next iteration from the smart people at the Productivity Commission, my concern is a bit different.

Because the perennial issue facing genuine reform of mental health in Australia is not the articulation of solutions – it is their implementation at scale.

It doesn’t matter how many recommendations the Commission makes, or how brilliant they are, if they are never implemented.

The key questions are:

Based on Australian experience to date, these questions are FAR MORE important than identifying what is to be done.

In fact, if I was the Productivity Commission, I would be concentrating far more on the mechanisms, processes and tools of change than recommending new programs and services.

It is true that some fundamental issues in mental health are yet to be resolved in my view.

For example, is everybody really working to try, wherever possible, to give people with a mental illness every opportunity to receive the care they need in the community.

How committed are the states and territories to hospital avoidance? Where are the systemic and national measures to ensure the presence of correct rather than perverse incentives? How willing or obligated are governments to provide the funds needed to establish alternatives to hospitalisation?

Even more generally, it seems to me that agreed pathways of mental healthcare have failed to emerge.

The real impact of this is that families don’t know where to go, what to expect, who to see or what to do next in trying to find care for their loved ones.

At a service level, it permits Australia to experiment with a hub here, a website there, a nurse in this practice but not that one, and other Band-Aids.

It would be terrific if the Productivity Commission lent its consideration to these matters.

However, the main task is about change. This would be difficult enough if the focus of change rested solely within the health domain. But it does not – engaging multiple agencies and governments across the whole complex social context of mental health care.

Change must also reflect Australia’s decision to place greater emphasis on regionality. Do our regional decision-makers in mental health have the tools and skills necessary to respond to the three key questions posed above? If not, how can they be supported?

Without wishing to put undue pressure or more burdensome expectation on the Productivity Commission process, the production of yet another spell-checked, handsome bound report with very sensible recommendations will not make much of a difference to the future of mental health reform.

The vast majority of sensible changes we should make to the way we provide mental health care in Australia are already known.

What is missing is the secret of supporting sustained, effective local change.