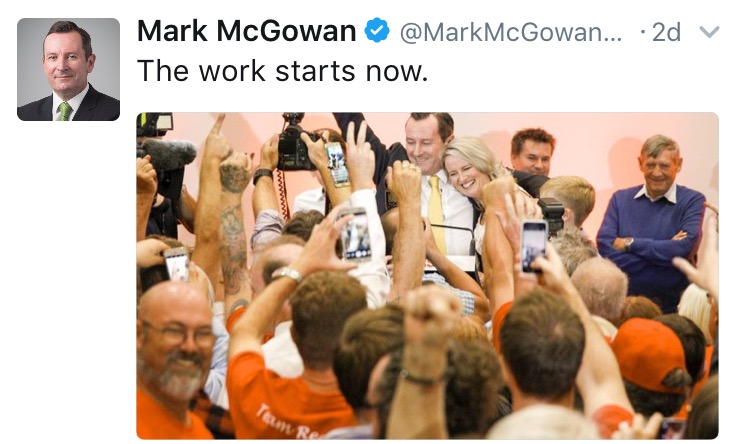 Implications for public health from the WA State Election

Aside from its state-based implications, the recent Western Australian election was seen by some as a barometer for the rest of Australia in terms of economic issues, the viability of the One Nation party, federal government leadership and traditional political alliances.

More pertinently for those living in WA, leadership, priorities and investment from state government have important implications for health. With this in mind, Croakey asked regular contributor and WA-based Public Health advocate, Dr Melissa Stoneham to provide a run-down, on what the new premier and his colleagues might be expected to serve up, to a voting public who have expressed their hunger for change.

It was a sunny day in Perth as the ordinary person lined up patiently, waiting to cast their vote in the Western Australian State election.  Some purchased a democracy sausage as the polling booth barbecues started to heat up, while others sipped on a hot chocolate purchased from the local P&C stall. Yet the voters did not have to wait long for a result. In a devastating blow to WA’s fifth longest serving Premier, Colin Barnett and the Liberal Party, Mark McGowan and Labor were declared the winners of the WA election inside the first two hours of counting.

The end of a road

It’s time for a fresh approach were some of the first words Mark McGowan said after accepting the job as WA’s 30th Premier. And true to his word, on his second day in Office, McGowan asked contractors on the controversial Roe 8 (also known as the Perth Freight Link) to mitigate any losses, as his government was not going to proceed with the road.

Now you might not automatically think this is a health issue…but it is. The 5 kilometre road was destroying the environmentally and culturally sensitive wetland environment known as the Beeliar Wetlands. Preserving the variety of life on earth is essential to human health. Most of us realise that the many ways we harm our environment, eventually come back to haunt us in the form of sickness and ill-health. Given the link between environmental problems and human health, the halting of the destruction of this unique wetland is a win for not only the environment, but also for the community’s health.

Overall, public health didn’t really have a large profile in the lead up to the 2017 State election. Even the public health pre-election forum, hosted by the Public Health Advocacy Institute of WA and partners, was a little lack lustre. Some promises were made and policies released but on the whole, public health failed to compete with the big issues such as the State’s economy, the privatisation of Western Power, housing affordability and preference deals. 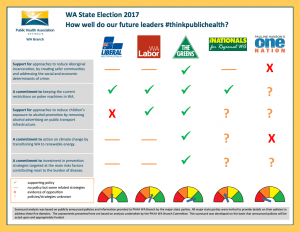 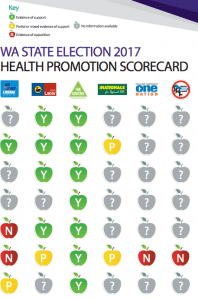 A promising future for WA’s health?

With Labor now at the helm, it is looking more promising for public health in WA. During the lead up to the 2013 State Election, Labor Health spokesman Roger Cook did suggest the creation of a Public Health and Wellbeing Minister, but as he told me later, he was expecting a rowdy and enthusiastic response from the public health sector. This was not forthcoming. Maybe we were simply shy, maybe we didn’t believe him, or maybe we just didn’t care enough….which is a shame because if health and public health are to be seen as two distinct areas, with one focusing on clinical care and the other on population and preventive health, these are the types of initiatives we need.

Delivering on political promises once in Office can be challenging and there’s no need for me to detail the many broken campaign promises that have accumulated throughout Australia’s political history. Although, I don’t think I can give up the opportunity to remind people that in 2013, Colin Barnett did say on Perth radio that he did not think people studied the promises. This was a cop out. I think most people took this state election quite seriously and did in fact read and analyse the political promises made before casting their precious vote. The people around me in the lead up to, and on, voting day certainly appeared to be eternal optimists, who wanted to believe that our politicians would improve our lives and our health.

So as we near the end of the first week in Office, and with the WA Cabinet yet to be named, I am ready to trust our politicians and believe that this time, it might just be different.