Home Global health and climate change 2019-20 climate bushfire emergency In the wake of devastation and disaster, a letter to the Prime Minister 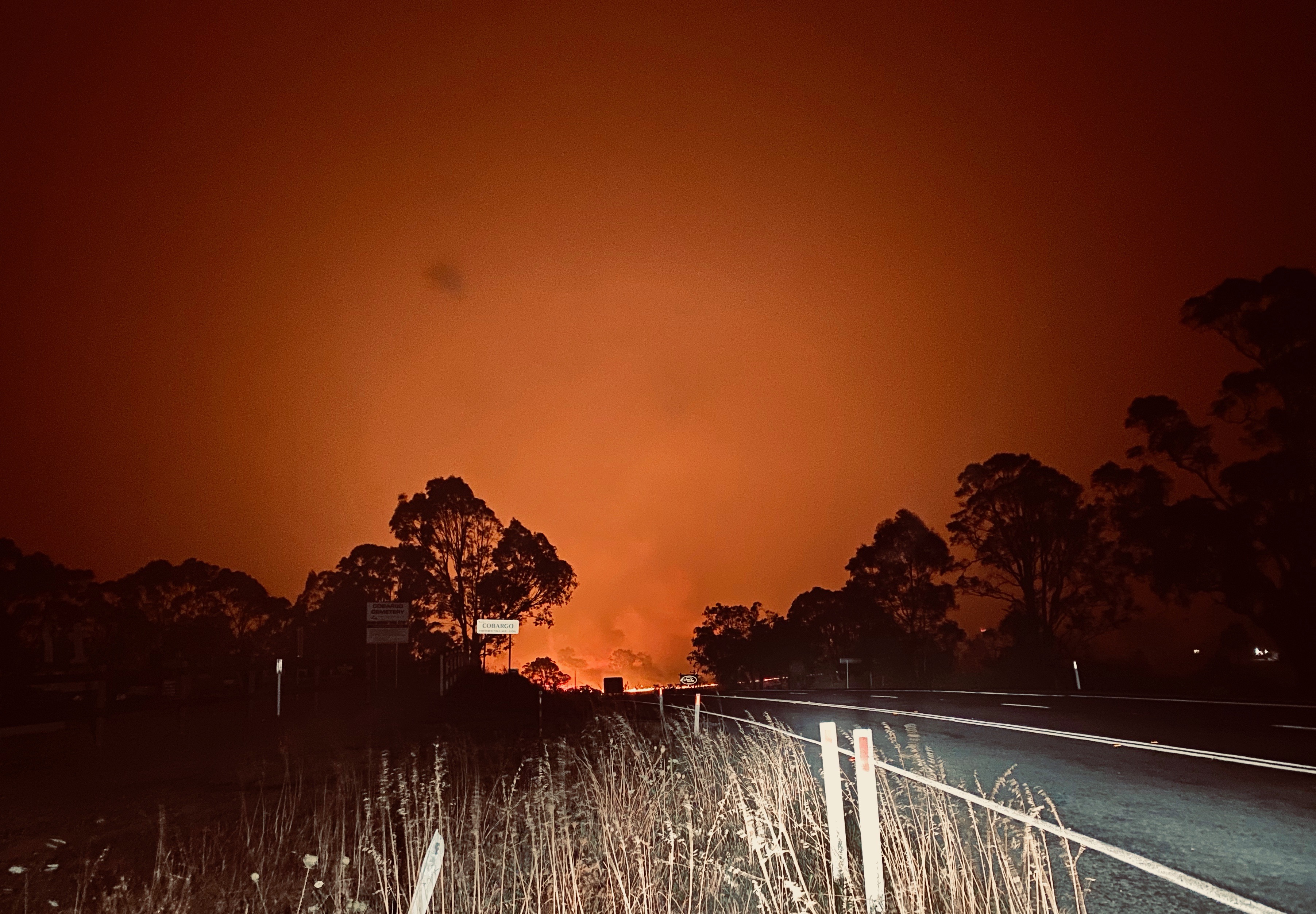 In the wake of devastation and disaster, a letter to the Prime Minister

Prominent rural health academic Professor John Wakerman and his family were among those evacuated from the devastating fires on the south coast of NSW earlier this month.

Wakerman writes below about the angry and frustrated letter he has since sent to the Prime Minister, as well as some key lessons from the current disaster, including the importance of telecommunications security for rural and remote residents.

I have experienced first-hand the catastrophic impact of the bushfires in south-eastern NSW on the local population. Commencing in the morning of 30 December, my partner Nettie and I relocated three times over four days in order to maintain our safety: from our shack in bushland near Yowrie, to Cobargo, thence to Malua Bay and finally to Canberra.

Sabina and Gary, my sister and brother-in-law, who are also Alice Springs residents, travelled from Canberra to visit us on 30 December, but got no further than Cobargo, where we met them.

The five of us – including Poppy our dog – evacuated from Cobargo with minutes to spare, flames licking the perimeter of the town. There were three deaths in surrounding areas.

In Malua Bay, where Sabina and Gary had rented a beach house, electricity and mobile phone signal were both down. There was darkness at noon as flames appeared on the other side of the highway and the far headland was alight. We had already filled all available water receptacles in the beach house, hosed down the walls and roof, and planned our route down to the beach if it came to that.

We visited evacuation centres in Malua Bay and Batemans Bay to get information about fire and road status, and a third when we returned to Cobargo, to check if any more volunteers were required.

On 9 January, ten days after the firestorm raged through Wadbilliga National Park, Illawambra Valley and on to Cobargo, Nettie and I hiked into our property. For 15 years, this has been our retreat from the central Australian summer. The annual valley dinner hosted by our generous and welcoming neighbours didn’t take place this year.

We clambered over numerous tall eucalypts that had fallen, blocking the unsealed road. What was once a lush green valley fed by the clear water of Wandella Creek, was now black, ashen; no birdsong.

The usual mobs of trusting wallabies were gone. The intermittent smell of putrefying carcasses reminded us of the completeness of the scourging blaze that swept up the valley.

Our ‘shack’ was really a substantial, eccentric artisanal work built by Daniel, the original owner, out of recycled material and timber milled on the property.

Our summer home had been transformed into a pile of rubble and memories: haphazard lengths of tin, molten glass and some barely recognisable sturdy metal objects – such as the bathtub. Everything that could burn had disappeared in the conflagration.

Daniel’s wattle and daub wall had collapsed in one piece – a testament to an old building method. One stubborn fig tree clung to life.

Four of our neighbours’ houses had met a similar fate.

Remarkably, the fickle firestorm had taken Glen and Faye’s house, but left intact their sheds and a caravan. It had also selected Naomi’s art studio for destruction, but her house was intact and untouched.

Though numbed by the destruction, Nettie and I are lucky. We still have a home in Alice Springs to which to return. Many in the region were made homeless, businesses lost.

A letter to the Prime Minister

On 3 January, three days after the fire had raged up our valley on New Year’s Eve, angry and frustrated I wrote to the Prime Minister. I asked a number of questions of him.

Firstly, why weren’t we better prepared? We have a justified expectation that the national government will keep its citizens safe. That has not been the case. Over the past 12 months there have been multiple warnings from academic and fire-fighting experts about the extended duration and ferocity of bushfires expected over 2019/2020. I have witnessed how short-handed our courageous RFS volunteers are, and the lack of sufficient equipment such as water-bombing aircraft. Many thousands of people sheltered on or near beaches, whilst local volunteers struggled to meet their food and shelter needs. Petrol was scarce; people queued to buy food at the local supermarket; many ATMs were not working and the cash required to purchase petrol and food was difficult to attain for many people. Generators were trucked into affected communities after the event. Traffic jams impeded the evacuation of tourists and residents from the region, with not a policeman in sight to manage traffic problems.

This begs the question of why this ‘too little, too late’ scenario was allowed to develop. Why weren’t we better prepared in terms of fire-fighting equipment and emergency relief for stranded residents and holidaymakers? Fires don’t recognise state borders. This is a national, multi-jurisdictional disaster, the response to which should be led by our national government. As these unprecedented fires continue to rage through the summer, do we have a nationally co-ordinated plan to effectively deal with them?

Second, where is the national leadership in addressing the underlying causes of this national disaster? I have read this week excerpts from Angela Merkel’s speech concerning her ongoing strong commitment to addressing climate change. Chancellor Merkel is arguably the most respected elected national leader in the developed world. At the age of 65, with formal retirement from politics imminent, she has steadfastly committed herself to ensuring a better future for her children and grand-children. She has committed ‘all my strength to ensure that Germany makes its contribution – ecologically, economically, socially – to get climate change under control.’

In Australia, in the period since both major parties went to the 2007 national election with carbon reduction schemes, we have squandered a decade of opportunity to seriously address this existential threat. The politicisation of this issue and resultant lack of action have not only contributed to creating the extraordinary environmental conditions that have facilitated this unprecedented conflagration, but have also lost Australia its moral authority globally. Your government’s accounting tricks and tortured semantic gymnastics stand in sharp contrast, for example, to Germany’s clear policies which include carbon pricing and tax incentives for long-distance rail tickets. I have copied this email to my local member in the NT and the local representative in NSW because I believe that the current circumstance demands a united national policy response, free of the intra- and inter-party politics that have impeded credible, more substantive action addressing an existential threat.

Where is the national and international leadership that is the minimum we should expect of our elected leaders? We deserve better.

Finally, during this crisis, in the absence of electricity and internet, and with no alternative authoritative source of up-to-date information about the fires, we sat in our car periodically to listen to local ABC radio for news about the current situation – progress of fires, road closures etc. Without the ABC, we’d have been completely in the dark.”

As I write this some 10 days later, I’ve had no response.

The personal is political

These ferocious and widespread bushfires have been a game-changer. They have provided the country and the world with a sober, shocking lesson about the calamitous impact of ongoing global warming.

Despite numerous warnings since the prescient Garnaut review in 2008, these fires have highlighted the deficiencies of our current system of dealing with this disaster.

In the context of an existential threat, we can’t wait another two to three years for a Royal Commission’s recommendations to be considered by government.

We need to act now to:

(1) ensure there are adequate human and physical resources to prevent and mitigate future bushfires. This should include expansion of the Indigenous Rangers’ program or similar to do all we can to use existing traditional knowledge to prevent these massive fires;

(2) improve the co-ordination of emergency responses and recovery across jurisdictions and between national and state governments. We don’t have time to pass the buck;

(3) ensure evacuation centres and recovery activities re-inforce local capacity and not usurp it. This includes involvement of local health providers, councils and businesses;

(5) guarantee telecommunications security to rural and remote residents. In our district, we previously had reliable mobile coverage, which deteriorated two years ago for no clear reason. Local residents have been advocating with Telstra and MPs for the past 12 months. Despite our documented concerns about just this sort of bushfire situation, there has been no amelioration in service. In my most recent correspondence with the Telstra CEO, he responded that “the Yowrie mobile coverage is patchy due to terrain and unfortunately areas of patchy coverage can change over time due to external factors such as tree growth.” I can confirm that with the loss of most of the vegetation in the valley after the fire, the signal is no better. This is an unsatisfactory and dangerous situation;

(6) ensure the ABC is funded at a level that ensures its ongoing ability to provide up-to-date information in country areas.

It’s easy telling others what they should do. What am I going to do to address these issues myself?

(2) do all I can to advocate for sensible policies to mitigate the impact of global warming;

(3) minimise my own impact on the environment through sensible and frugal consumption – food, fossil fuels and the many oil derivatives on our lives; and

(4) continue to acknowledge and reciprocate the kindness and generosity of my family, neighbours, friends and complete strangers at a time of need.