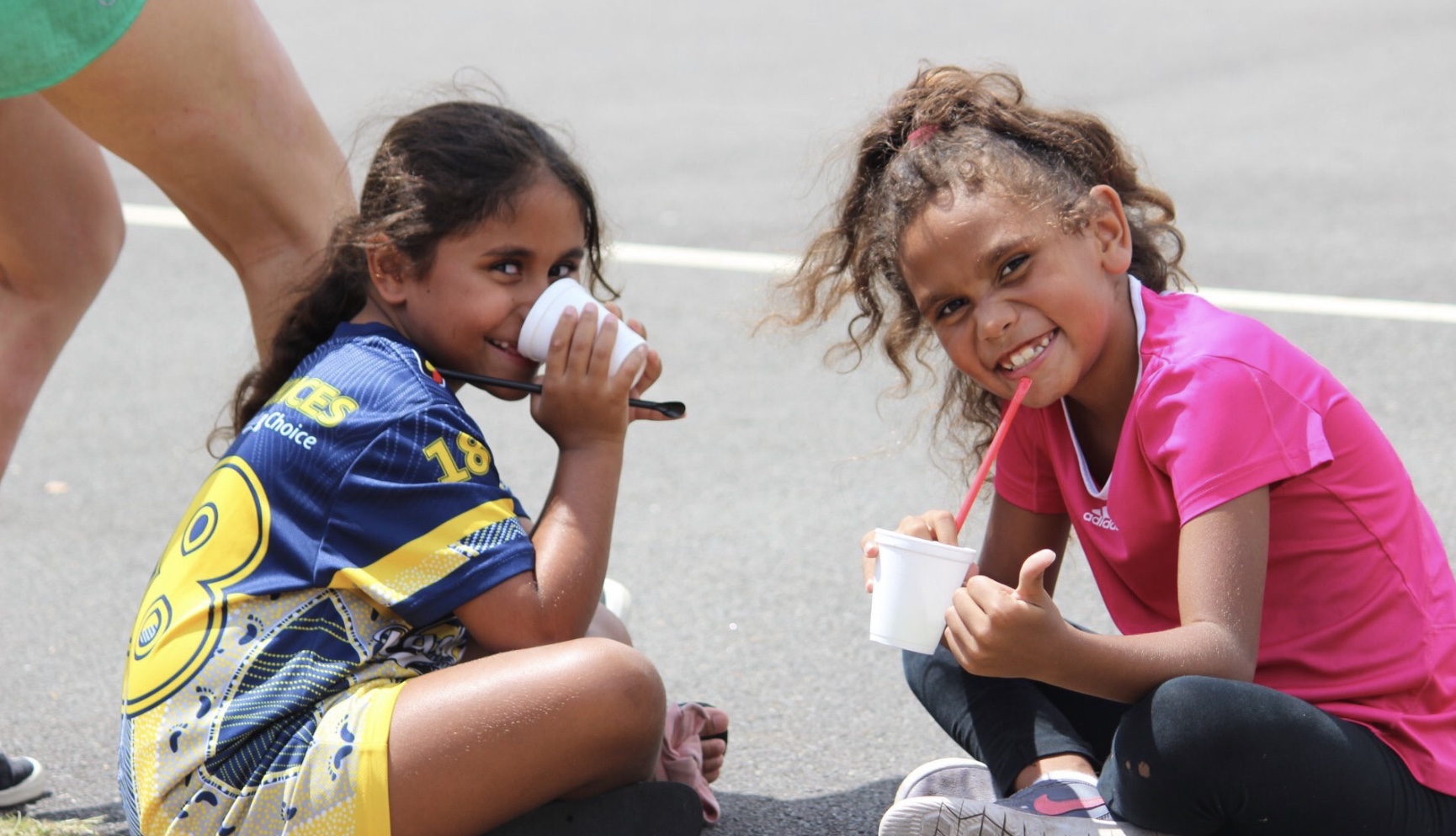 Introduction by Croakey: In their recent submission to the Productivity Commission Inquiry into an Indigenous Evaluation Strategy, Dr Chelsea Bond and co-authors from the University of Queensland and Inala Wangarra, wrote from experience, about working in and for the Indigenous policy sector.

Their list of problematic trends – “mainstreaming, paternalism, rapid-cycling policy change, defunding of the Indigenous community-controlled sector (ICCS) and hierarchical decision-making”— speaks to the unenviable task that Aboriginal and Torres Strait Islander organisations have long had, in playing catch-up with the wheels of government.

A Twitter thread from Dr Bond which seemed to exemplify this situation caught Croakey’s eye earlier this week.

Officers from the Department of Housing and Public Works have advised Inala Wangarra, an Indigenous community development organisation, that the funding for their Indigenous Community Sport and Recreation Officer (ICSRO) will be discontinued from 30 June 2020.

This follows a change in direction for state government sport and recreation policy in Queensland.

The ICSRO funding has been provided to Inala Wangarra since 2006 and has been instrumental to improving Indigenous participation in community-led sports and recreational activities in the region.

The changes may also impact other Indigenous communities across the state who are resourced under the ICSRO program.

Inala, a south-western suburb of Brisbane, was featured in the second series of the television program “Struggle Street” where it was depicted as an area with significant economic, health and social challenges.

While this characterisation lacked nuance, it is difficult see to why a successful and highly valued program with demonstrated health and social benefits in an area of need has not been prioritised for guaranteed and extended support from the state government.

With Dr Bond’s permission, we publish the test of the thread below. 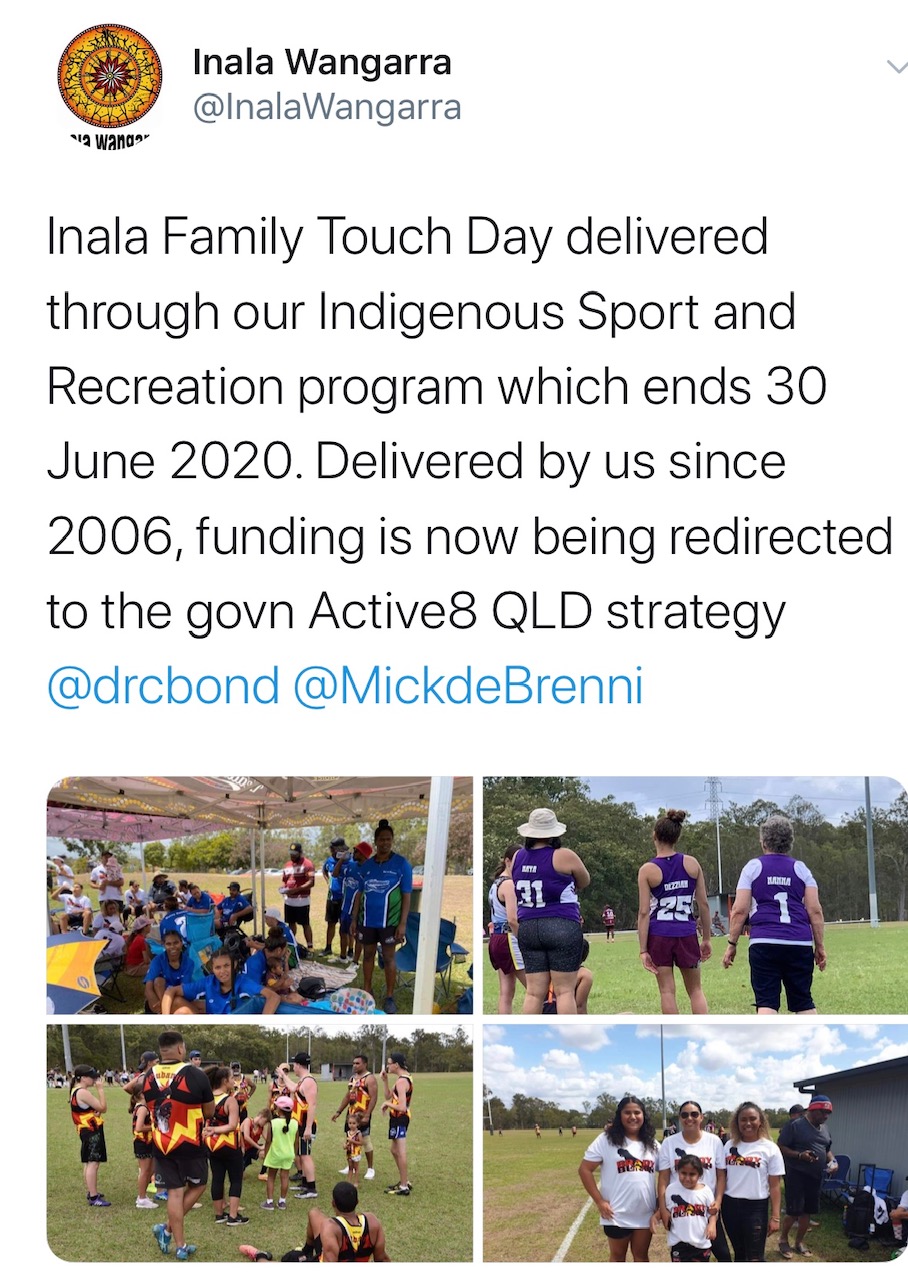 The Queensland Government Indigenous Sport & Recreation program was so important for Indigenous communities across Queensland, enabling us to deliver our own programs for our communities for well over a decade.

Of course, a few years back, without consultation or evaluation of the program, most of the funding was directed to PCYC’s to employ Indigenous sport and recreation officers – at Inala Wangarra, we were one of just a few that got to keep our worker.

And now it seems from 30 June 2020 we will no longer have an Indigenous sports and recreation officer in our community. We don’t know what the evidence-base is for this decision.

Our people die disproportionately from lifestyle diseases. Research from @GkSpurling (Dr Geoffrey Spurling) and @InalaCOEresearch (the research unit at the Southern Queensland Centre of Excellence in Aboriginal and Torres Strait Islander primary health care) suggests that engagement in sports and recreational activities is associated with better social and emotional well-being as well as physical well-being. 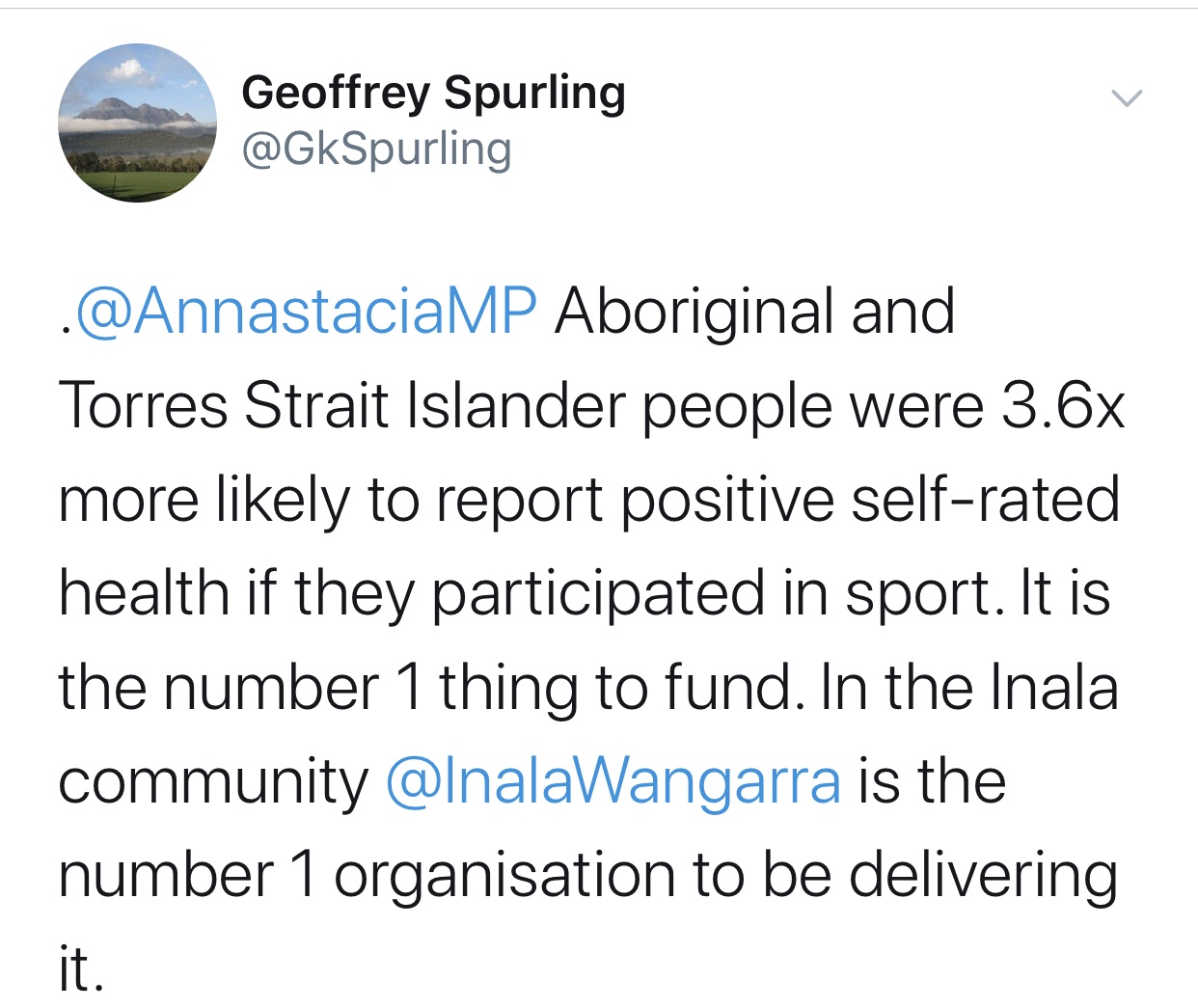 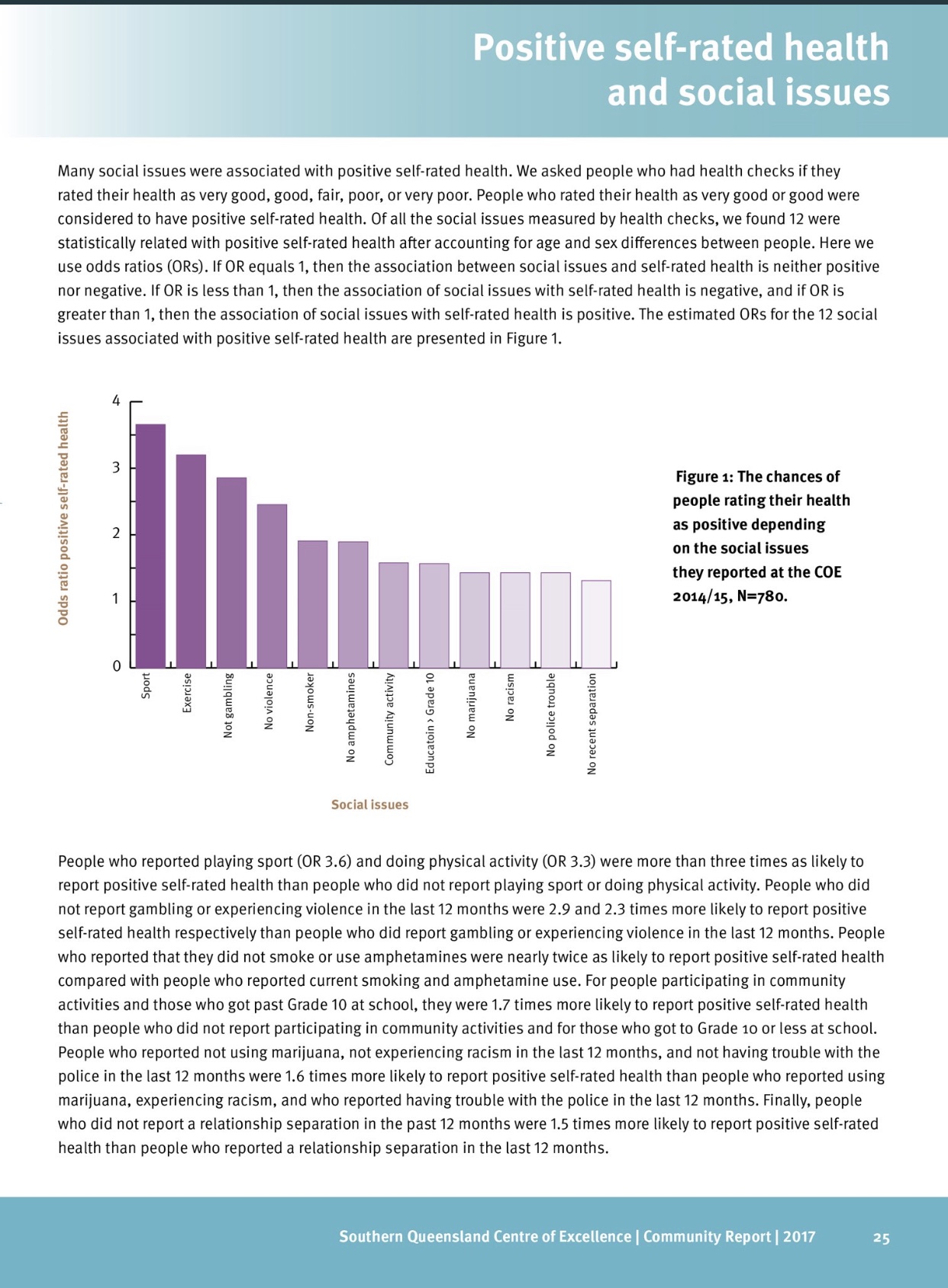 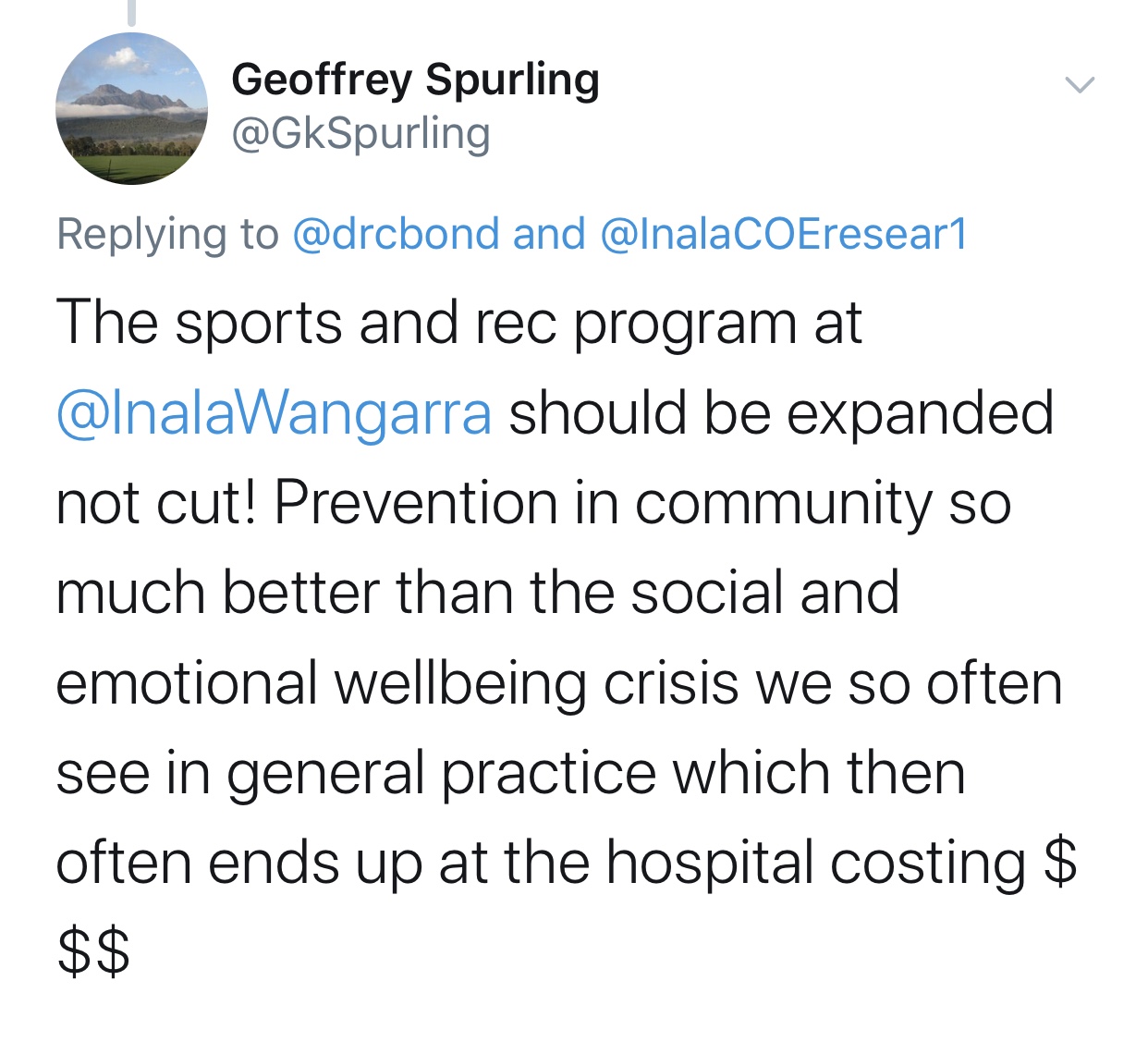 We also know that locally devised community programs are better attended, more effective and more cost-efficient. The Indigenous Sport and Recreation Officer position isn’t a lot of money but @InalaWangarra does a whole lot of things with it!

For starters we run a football club – one of just a few sports associations in Inala that still carries the name ‘Inala’ loud and proud. It’s a club that has not just made sure rugby league was kept alive in our suburb, it brought our old fellas and women, young and old to the club. 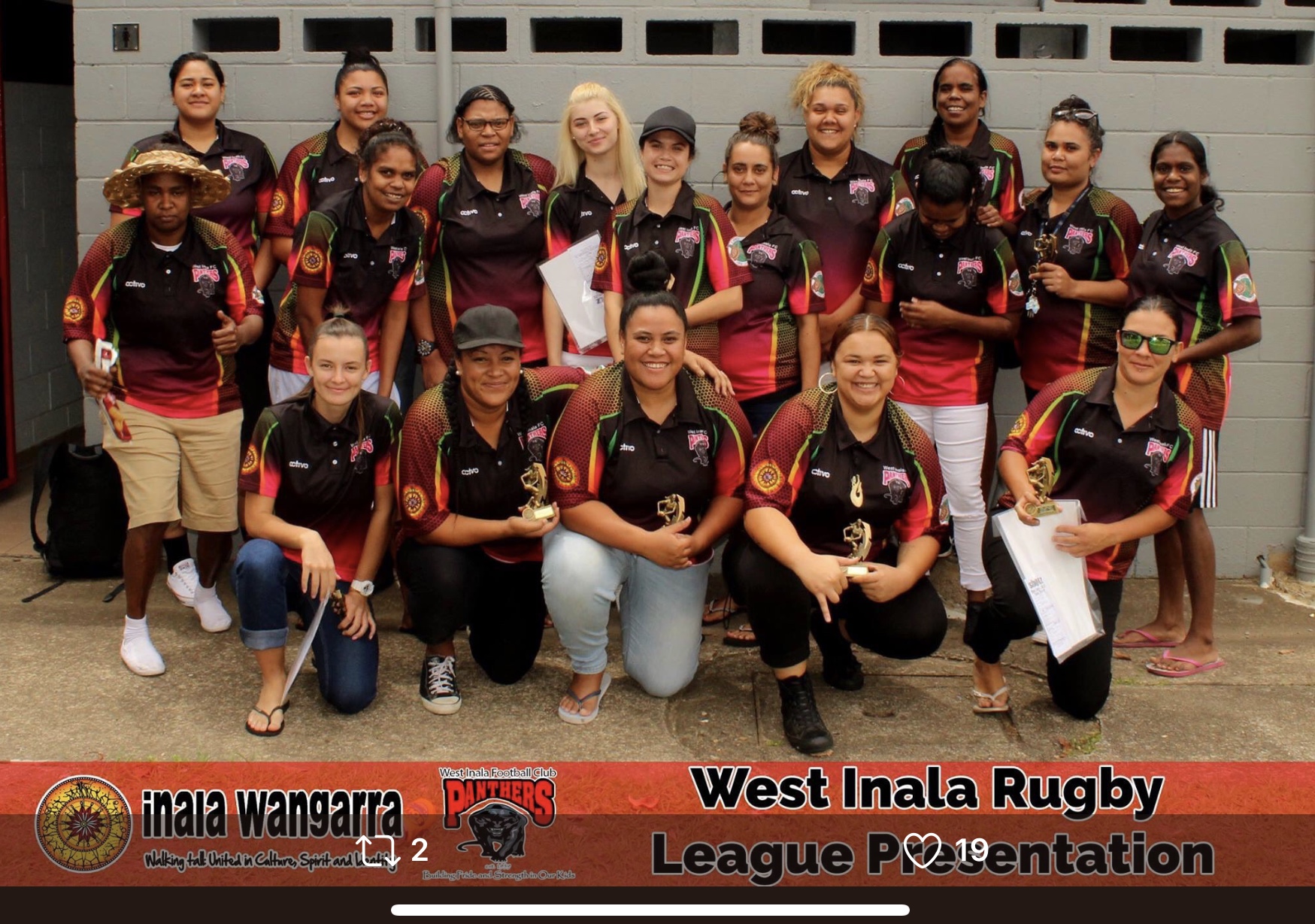 The sport and recreation program was where we developed the Inala Family Touch Football in honour of #DJReid a young man who lost his life too soon but loved touch football. Every year 18 families come together to rep their mob in mad jerseys to play for their name on DJ’s shield. 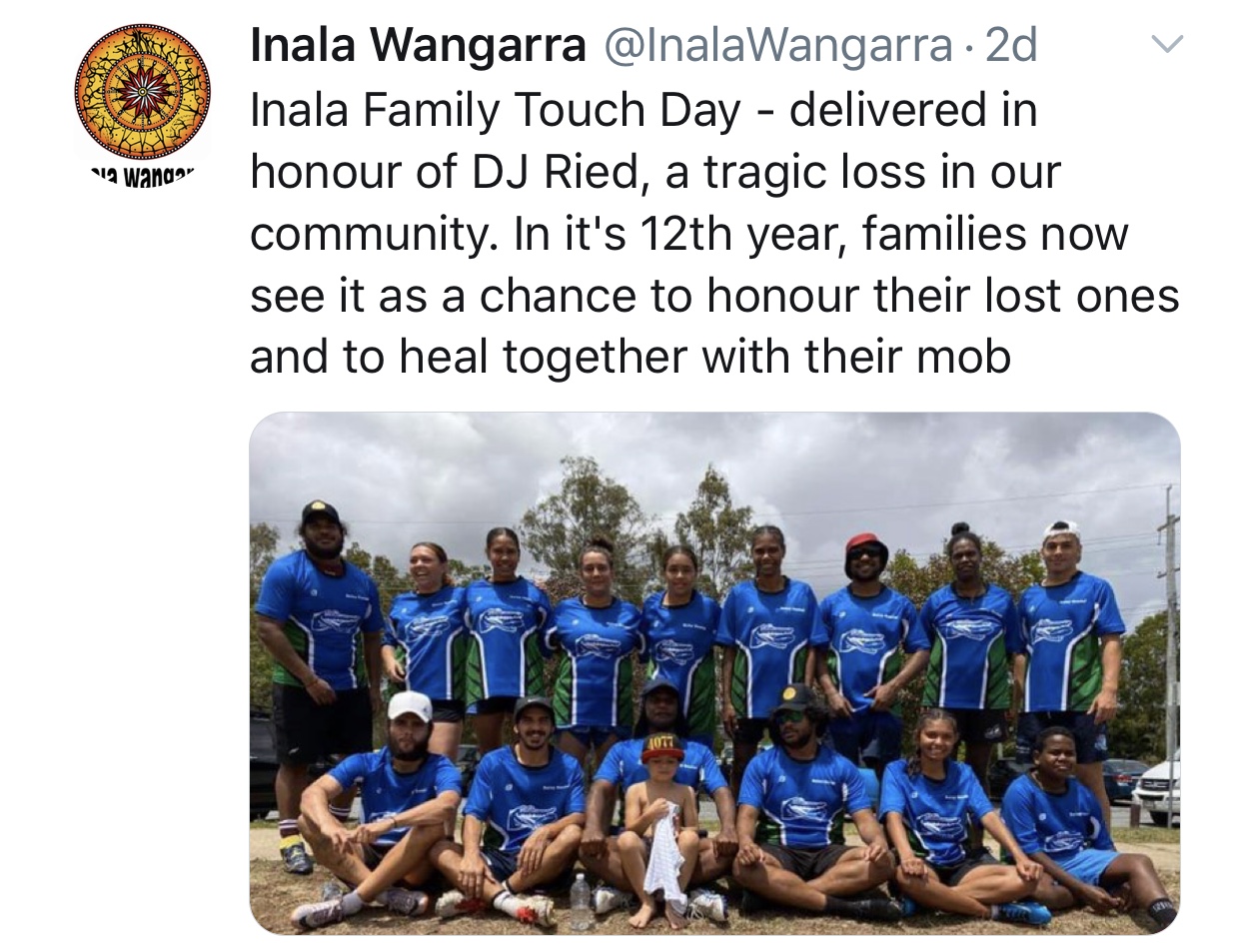 This program brought traditional games and traditional dance to kids in our schools, where cultural activities are few and far between. Several of our sport and recreation officers over the years have led our Inala Dance Group YobAlani – Shannon Turbane, Josh Shadford & Matthew Bond.

It’s the same program that brought us #Wangaranzza a netball carnival in our community in which funds raised are donated to support Breast Cancer Awareness. 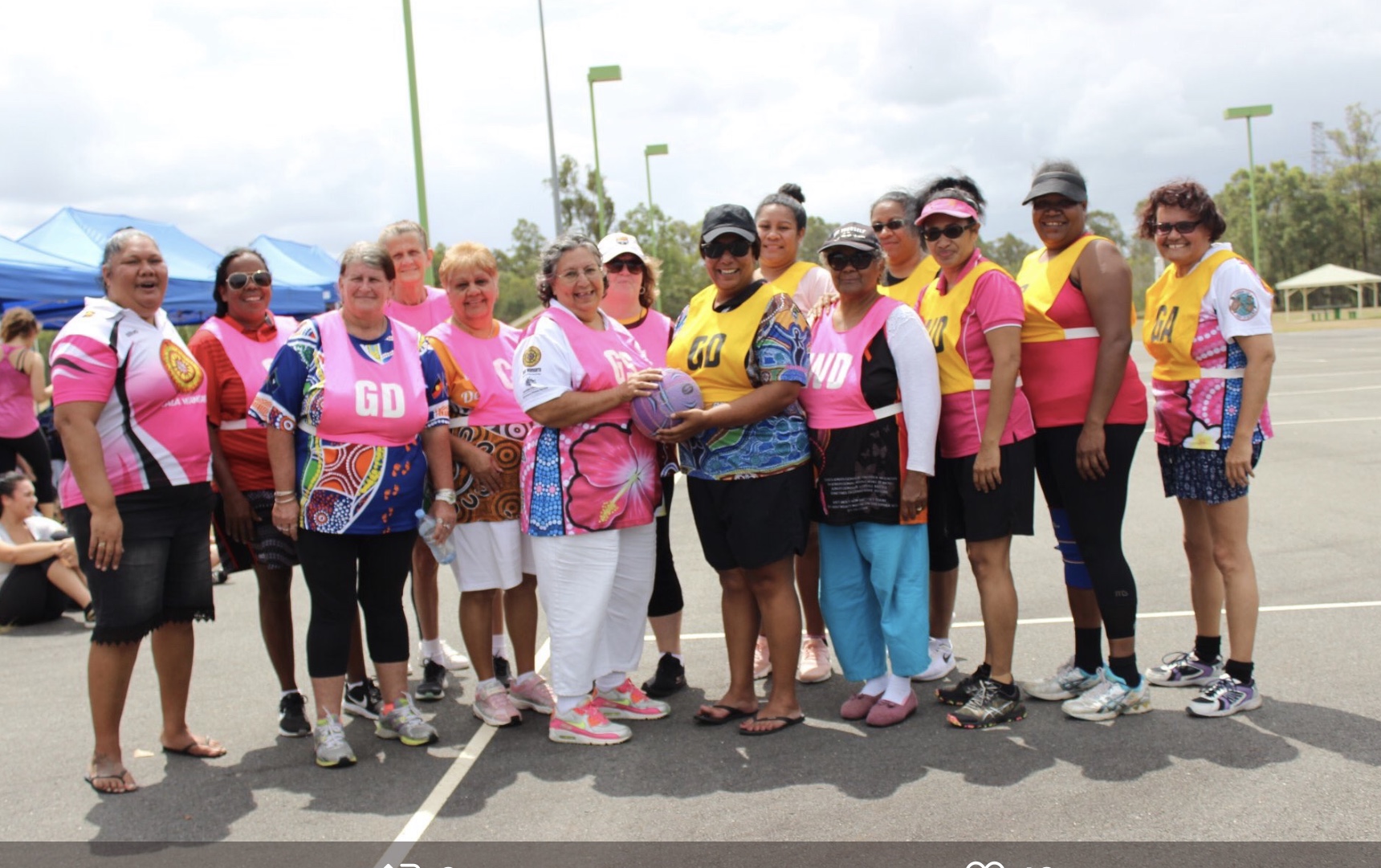 Our organisation @InalaWangarra supports young and old to participate in sporting and recreational programs inside and outside of our community, from @DeadlyChoices Senior Games to our very own hip hop workshops & cheerleading.

It also supports the engagement of men’s and women’s groups in our community to get active through culture.

From cricket to touch football to rugby league – the Indigenous sports and recreation program did a lot, because we were funded to deliver to our community.

I think you will find that no one can deliver to our community like we can – and have been doing for well over a decade now. The decision to restructure the Indigenous sports and recreation program in such a way that means our community misses out is unconscionable.

With the recent Productivity Commission inquiry into evaluation of Indigenous services, decisions like this from the Queensland Government really need to be examined. Why are Indigenous programs that are delivering de-funded? Mainstreaming has failed urban Indigenous communities terribly.

And this is why many Blackfullas are deeply cynical of processes of consultation around service delivery – its not because we are ‘difficult’ or have a ‘naive’ understanding of how government works. It is precisely because we know how it works, or rather fails us, that we demand something better.

*Dr Chelsea Bond is an Aboriginal (Munanjahli) and South Sea Islander Australian, and an Associate Professor within the School of Social Science at the University of Queensland. She has extensive experience in Indigenous health, as a health worker and researcher in urban and rural communities across south-east Queensland. She is a board member of Inala Wangarra.