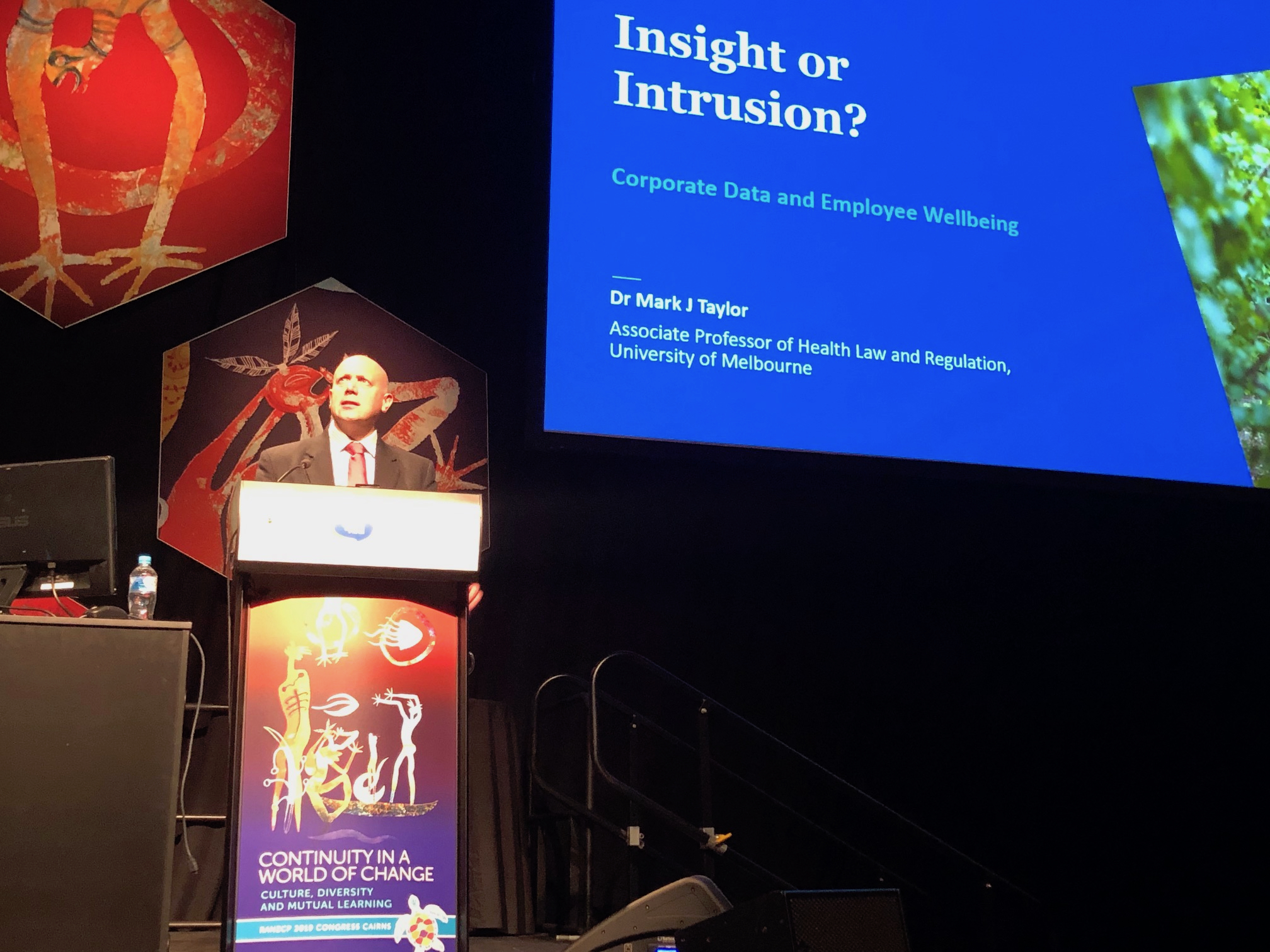 Insight or Intrusion? Associate Professor Mark Taylor charts the ethicolegal complexities of data in health at the recent RANZCP Congress in Cairns

Insight or intrusion? Data and determinants of mental health at #RANZCP2019

Insight or intrusion? That was the question posed about the use of data in a digitised world, and what it might mean for health, health care, health services, and a healthy society, at the 2019 Royal Australian and New Zealand College of Psychiatrists annual congress in Cairns.

In our latest Croakey Conference News Service piece from the event, Croakey journalist Marie McInerney reports on a call for health professionals to engage on data protection issues, as well as a keynote address examining a unique dataset on psychosis in remote Aboriginal and Torres Strait Islander communities that shines a light on the intergenerational impact of social and neurobiological turmoil.

A leading data protection specialist has urged Australian health professionals to engage on legal and ethical questions about appropriate data use, warning that personal information now endures in ways we may never have envisioned or approved.

Associate Professor Mark Taylor sounded the alarm at the recent RANZCP congress in a fascinating keynote address that highlighted the limitations of existing protections, “particularly when data is going to be used to inform an understanding of an individual’s risk of and susceptibility to future health conditions”.

Taylor, who is an Associate Professor in Health Law and Regulation at Melbourne Law School, ran through some startling and worrying uses of corporate data — many of which are already in practice — asking whether conference delegates would view them as appropriate, with or without consent from employees and/or if they were anonymised.

They included being able to:

Such examples illustrate that data is being given a second life beyond anything that might originally have been anticipated when people tick off on the terms and conditions of a website, workplace document, or patient information form, Taylor said.

“Our whole working life is being effectively 3D scanned,” he said, observing that  communication is increasingly digital, digital footprints are being kept longer, data storage for longer periods is cheaper than ever, and data sets can be increasingly linked.

“It’s more accessible, more interoperable, we have new and clever ways of analysing data, or mining it to yield insights that were previously unattainable,” Taylor said. 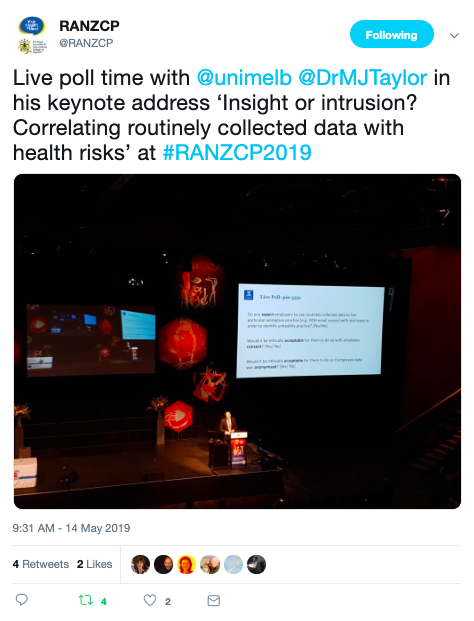 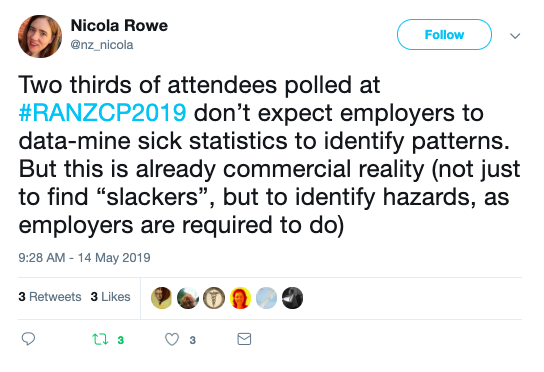 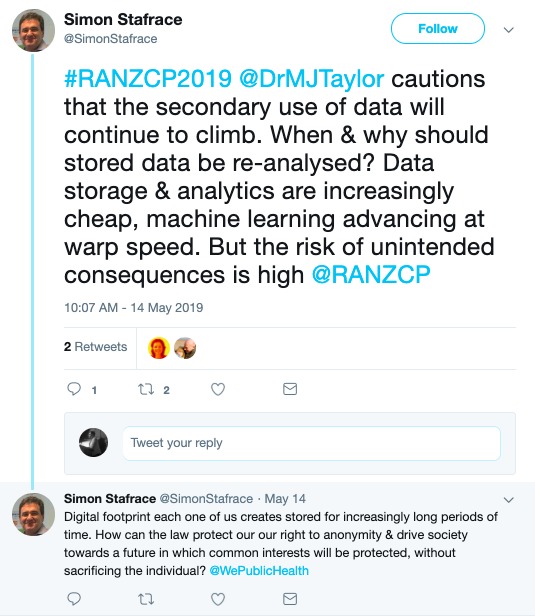 ‘The biggest lie on the internet’

Taylor is deputy director of the University of Melbourne’s Centre for Health, Law and Emerging Technologies (HELEX@Melbourne) which focuses on the legal and regulatory frameworks for new health technologies like genomics, stem cell research, gene editing and digital health.

He said that we currently rely on two critical data protections – “ask or anonymise” –  to balance public and private interests:

These are important principles, but they can’t do the work alone, he said.

On the issue of consent, Taylor said it has become “almost a joke when we look at how many hours it would take us to read the privacy policies that we blithely agree to when we tick the box”.

“That little tickbox has been described as ‘the biggest lie on the internet’,” he said.

“We cannot rely on individuals to do all the heavy lifting when it comes to protecting their interests, certainly we can’t rely on consent as the only mechanism by which we protect those interests and ensure reasonable expectations are met in future.”

Health data has been the subject of intense debate in Australia in recent times, with controversy over the rollout of the government’s My Health Record project (you can read some of our reporting on this issue here and here) as well as scandals over secondary use of patient information.

The funneling of private patient data by clinical appointment service HealthEngine to law firms seeking clients for personal injury claims was just one example of the latter, Taylor said.

Medical research was also an area of concern, he added, with people agreeing to their data or tissues being stored when “at the time of collection, with the best will in world, they can only be given limited information about what future uses of them may be because we just don’t know”.

RANZCOG president Steve Robson sounded the alarm on this issue last year, with advances in genetic screening technology posing unprecedented ethical challenges for the profession. The use of artificial intelligence and big data in clinical medicine was also the focus of a popular talk at last year’s summit of emergency doctors in Perth.

Taylor said anonymisation of data is also not working anymore.

He highlighted a graphic example in recent years where Melbourne University researchers were able re-identify patients in a Medicare Benefits Schedule (MBS) sample published by the Federal Government. Among the dataset was information about seven prominent Australians, including three MPs and an AFL footballer.

In a targeted appeal to the health sector, Taylor said he was at the congress to make three points:

“I think we’ve long since left behind the idea that you collect data for a particular purpose, use it for that purpose, then destroy it or forget you’ve got it,” Taylor said. 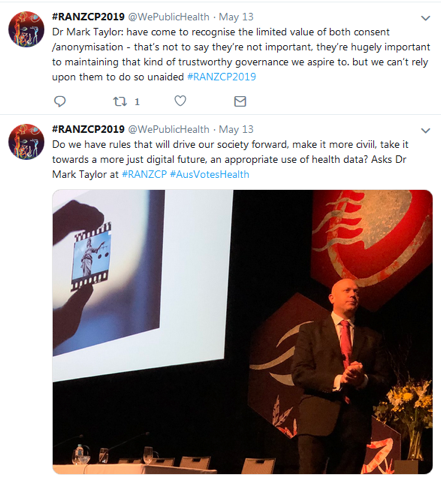 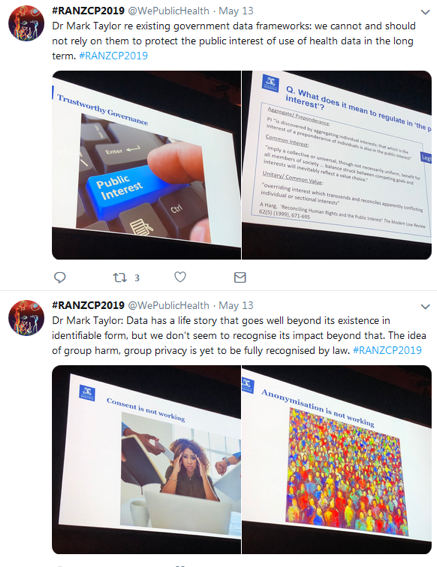 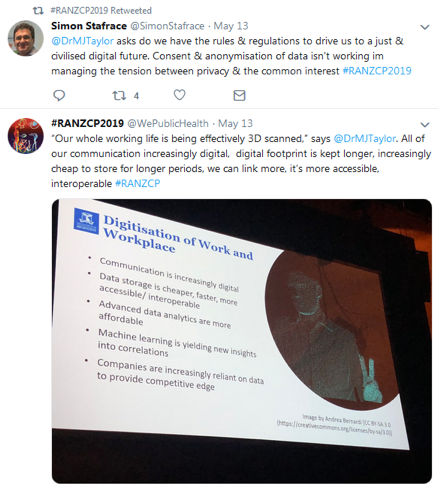 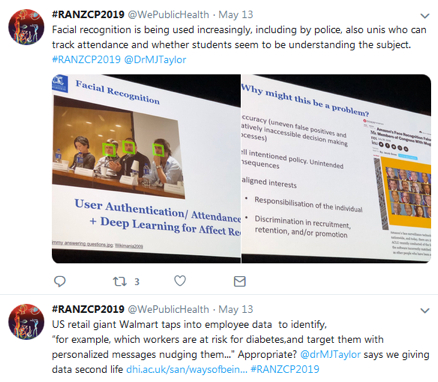 Trauma of the soul

The congress also heard about an unique study of remote Aboriginal and Torres Strait Islander communities that may shed new light on the social and neurobiological determinants of suicide and psychosis, including the impact of harsh government policies particularly in so-called Deed of Grant in Trust (DOGIT) communities.

Professor Ernest Hunter, a non-Indigenous now retired psychiatrist who worked throughout his career in Aboriginal and Torres Strait Islander communities in the Kimberley and Cape York, delivered a keynote address on his joint study — published in The Lancet in April — of the epidemiology of psychosis in those regions.

The study, which the authors say is the first of its kind, assessed the prevalence, incidence, and mortality of psychotic disorders through a clinical database of psychiatric records from 1992 to 2015.

Borrowing from the Welcome to Country at the event by Associate Professor Henrietta Marrie, an Elder of the Gimuy Walubara clan of the Yidinji people, Hunter said the study mapped “trauma of the soul”.

But “most important”, Hunter said it found dramatic differences in prevalence of psychosis within and across Aboriginal and Torres Strait Islander populations, with strong links to government policy.

Our findings highlight the particular vulnerability of Aboriginal people who live in places that were once mission and government reserves and which were subject to draconian social controls that continued to the 1980s and in which the dire consequences of that history continue to unfold.”

Hunter told the conference the study had matched, for example, early data in the Kimberley to “periods of substantial disruption” in the 1970s. These periods were characterised by dislocation, a forced reliance on welfare, and the arrival of alcohol, and were linked to a dramatic increase in the deaths of young adults from non-natural causes: homicides, motor accidents and, later, suicide.

Many of the dead were parents, he said.

Fifteen years later came the suicides of adolescents – “the children of that group, the first generation that had grown up in that environment of social turmoil” — and after them the tragedy in more recent years of suicides among children in the Kimberley.

“These children who are dying are the first generation who have grown up in  environments where they were exposed to suicide behaviour as a normative experience. In remote communities these deaths are extremely public, everybody is affected,” he said.

For Cape York communities, the study finds increased risk of a range of social and health outcomes – from compromised foetal and infant development to rates of juvenile detention and adult offending— for Aboriginal Queenslanders compared to Torres Strait Islander Queenslanders, illustrating the “particular vulnerability” of those who live in DOGIT communities. 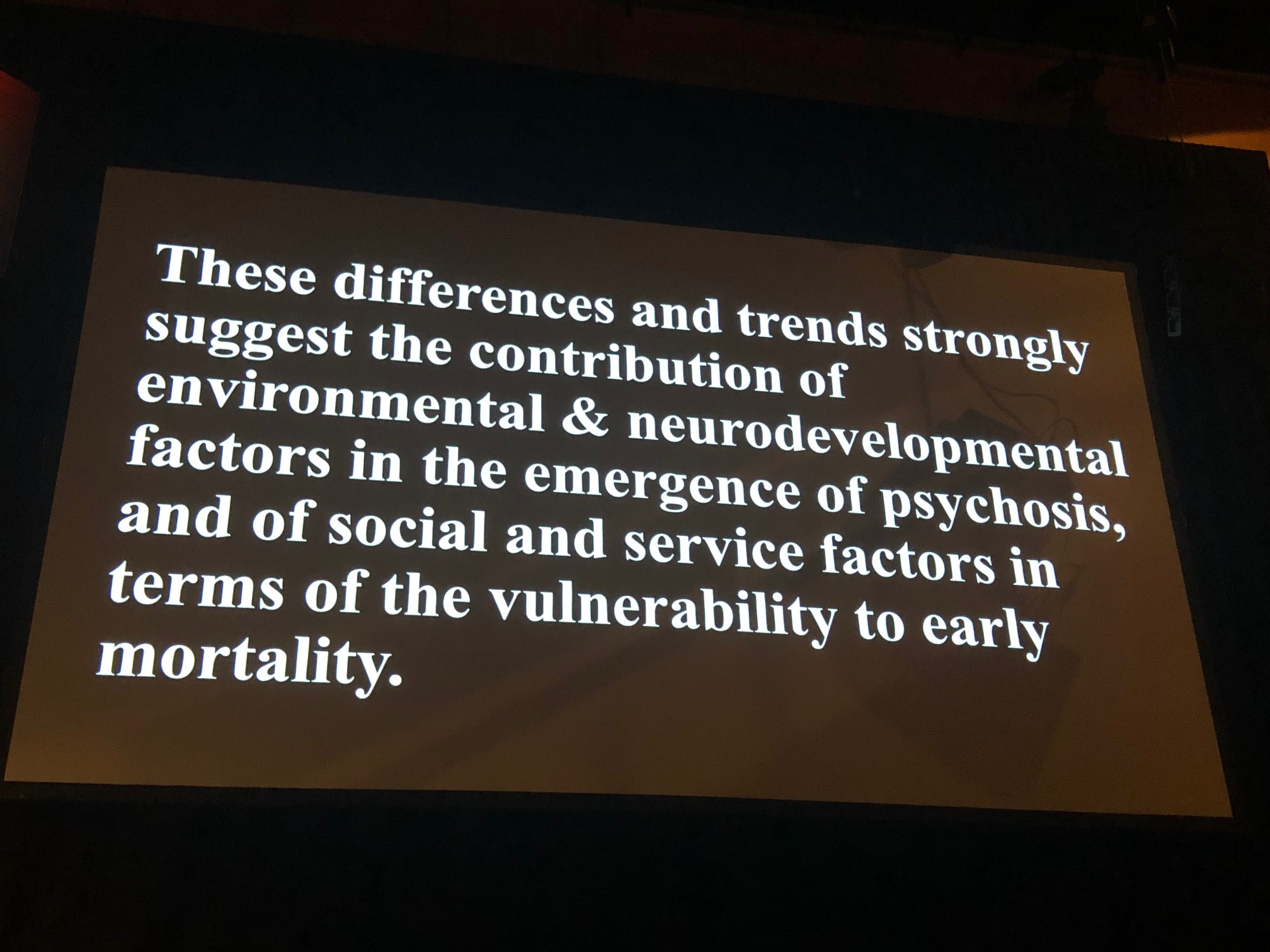 Hunter told Croakey the work implicates social and environmental factors in the development of psychosis, not just as experienced in the here and now, but impacting groups and individuals down the generations via neurodevelopmental influences that start before birth.

While the research doesn’t necessarily provide the answers, Hunter said it suggests that “probably the most important place to (intervene) is in pregnancy and early childhood”, including keeping children in school and families intact.

After decades working in the regions, Hunter said he is optimistic that practice and policy to better prevent and treat mental illness and suicide is heading in the right direction.

One critical factor is having a significantly greater number of Indigenous people driving the process.

The other is that –according to the data — people diagnosed with psychosis in the study regions over the past decade are much less likely to end up in prison than was previously the case. Hunter said this may relate to changes in the justice system, service provision or alcohol supply.

Watch our interview with Professor Ernest Hunter below:

This is the latest in our #RANZCP2019 Croakey Conference News Service series. Bookmark this link to read our coverage to date, with more to come.