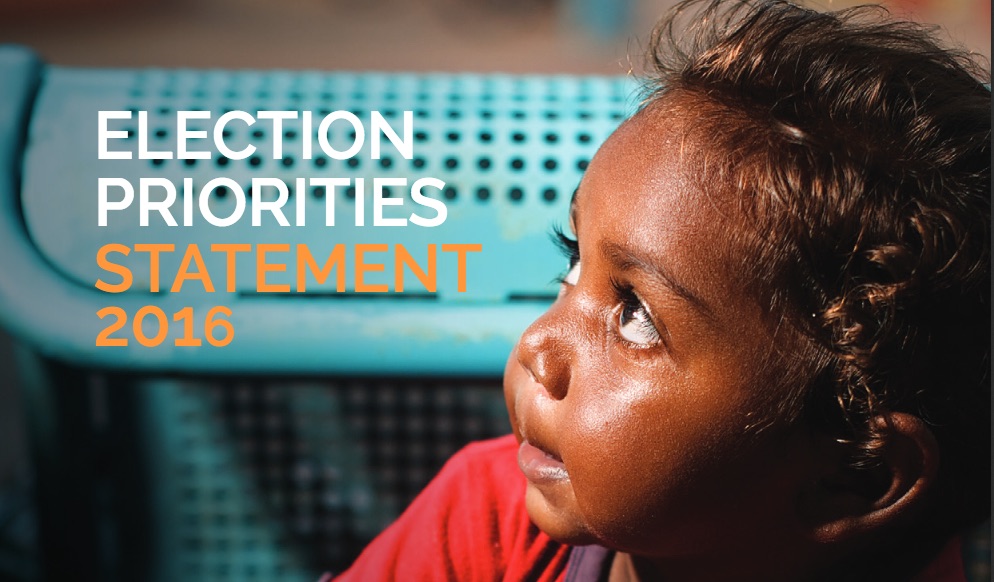 A scathing indictment of Australia’s failure to address the high incarceration rates of Aboriginal and Torres Strait Islander people has been published in an international journal, BMJ Global Health.

Researchers from the George Institute for Global Health at the University of Sydney have analysed the Australian Government’s response to criticisms made as part of the UN-led Universal Periodic Review (UPR) process, which scrutinises countries’ records on human rights.

Australia’s UPR completed in November 2015 showed it had made little progress in addressing concerns about Indigenous incarceration rates that had been raised in its inaugural UPR in 2011, according to an analysis by PhD candidates Janani Muhunthan and Anne-Marie Eades, and Professor Stephen Jan.

They describe Australia’s “recalcitrance” and “underwhelming” efforts, compared with progress made by comparable countries such as NZ, the USA and Canada, which had introduced legislation or policy initiatives to facilitate effective, culturally sensitive crime prevention with Indigenous communities at the forefront of decision-making.

As well as cutting funds to Indigenous services, the Australian Government had dismantled preventive agencies, such as the Australian National Preventative Health Agency and the National Indigenous Drug and Alcohol Committee, the researchers noted.

Meanwhile, excessive policing and mandatory sentencing in a number of jurisdictions were worsening the problem.

The researchers also said it was concerning that the Australian Government’s report to the UPR had not acknowledged increasing rates of Indigenous incarceration and deaths in custody.

They called for the introduction of justice targets, investment into generating evidence for policy innovations, and sustainable funding for Indigenous programs in order to reduce Indigenous incarceration rates.

They said it was “imperative” that potentially effective interventions such as the justice reinvestment model are trialled at scale, and that this would require cross-jurisdictional government support, leadership and coordination.

However, the researchers were pessimistic about whether the Australian Government would respond appropriately to the UPR processes:

The defiance evident in Australia’s response to the first cycle of UPR in 2011, characterised by its lack of progress and failure to implement recommendations it has previously accepted, highlights the challenges ahead in promoting international collective action as a means of protecting the human rights and health of disadvantaged minorities such as Australia’s First Peoples.”

Meanwhile, the Change the Record Coalition has released its election priorities, calling on all parties to make it a national priority to address over-imprisonment and the disproportionate rates of violence experienced by Aboriginal and Torres Strait Islander women and children.

The Coalition’s election priorities are:

Governments should work through COAG to establish a national, holistic and whole-of-government plan to address imprisonment and violence rates, with a concrete implementation plan and justice targets. They should establish, or task, an independent agency with Aboriginal and Torres Strait Islander oversight to co-ordinate a comprehensive, current and consistent approach to data collection and policy development relating to Aboriginal and Torres Strait Islander imprisonment and violence rates.

Governments should support capacity building, and provide ongoing resourcing of Aboriginal and Torres Strait Islander communities, their organisations and representative bodies to ensure that policy solutions are underpinned by the principle of self-determination, respect for Aboriginal and Torres Strait Islander people’s culture and identity, and recognition of the history of dispossession and trauma experienced by many communities.

They should ensure that laws, policies and strategies aimed at, and related to, reducing Aboriginal and Torres Strait imprisonment and violence rates are underpinned by a human-rights approach, and have in place a clear process to ensure they are designed in consultation and partnership with Aboriginal and Torres Strait Islander communities, their organisations and representative bodies.

Governments should also work in partnership with Aboriginal and Torres Strait Islander communities, their organisations and representative bodies to support the identification and development of place-based justice reinvestment trial sites.

Governments should invest in early intervention and prevention services commensurate with need, with priority for services that are Aboriginal and Torres Strait Islander community controlled.

This should include a focus on:

– Support for the development of holistic, integrated community-controlled early years’ child and family services in all communities in need, and investment in culturally strong and intensive family support services.

– Increasing access to culturally-appropriate early intervention and support programs, with a focus on:

Where do the parties stand?

Labor: Does not mention justice issues in its Indigenous health election statement but Opposition leader Bill Shorten pledged last November to set justice targets with a focus on community safety, preventing crime and reducing incarceration, and to support research into justice reinvestment.

The Greens: Have pledged to adopt Change the Record campaign recommendations, including:

Meanwhile, the latest analytics for the #JustJustice project, taken from Symplur for the period from launch on 9 April 2015, show there have been 3,654 participants to date, and more than 80 million Twitter impressions.

Perhaps the Government had better listen up? 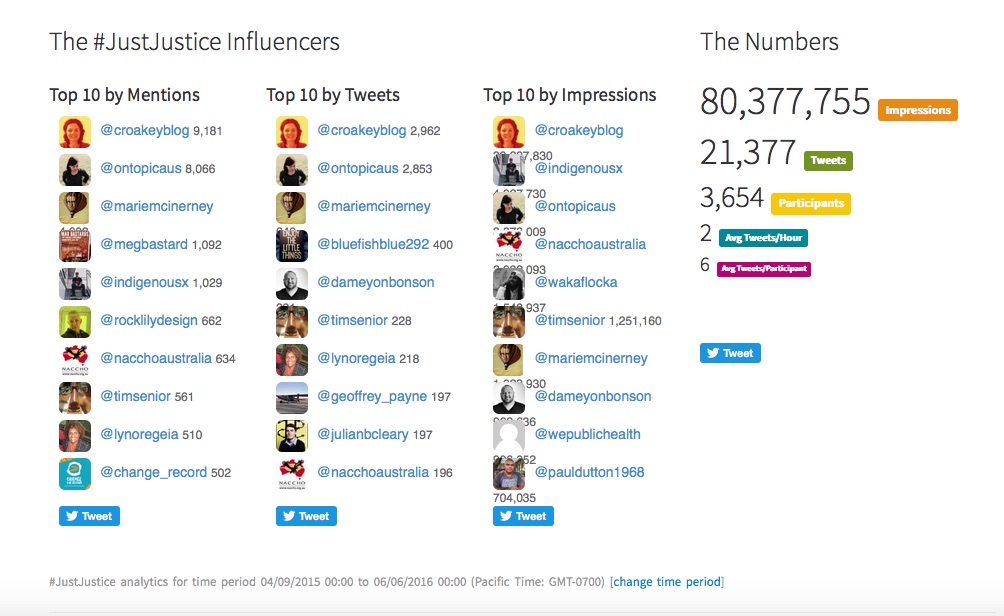 You can read more than 60 #JustJustice articles published to date here.