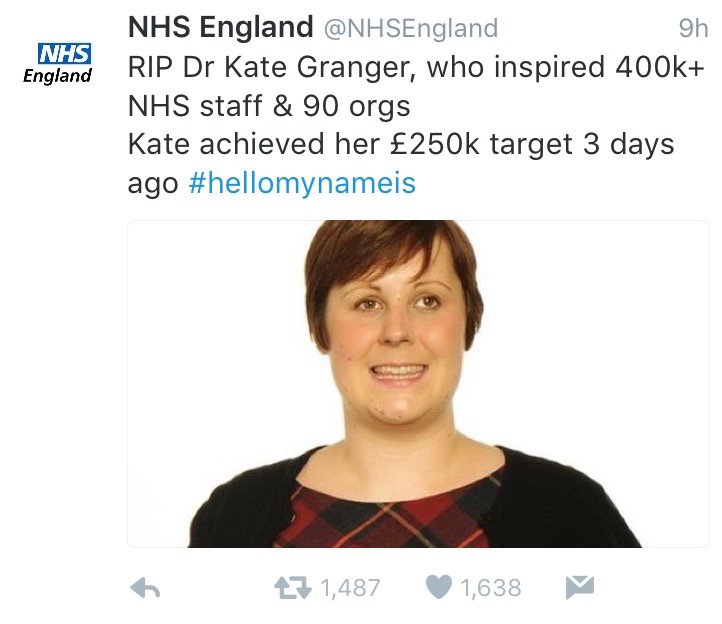 Kate Granger dies, but a legacy of compassionate health care lives on

This past weekend saw the twitter community remembering, celebrating and mourning Dr Kate Granger, a young English doctor who used her own experiences as a cancer patient to effect lasting change in health care.

Kate Granger died on Saturday, aged 34 years, from metastatic desmoplastic small-round-cell tumour. She had used the time since her diagnosis in 2011 to quality as a geriatrician and work in her native Yorkshire, and also to start a global social media campaign, #hellomynameis, to encourage health care workers to take the simple-but-vital step of introducing themselves to patients when they approach them to take part in their care.

Kate had been surprised and distressed by her own experiences as a hospitalised patient with a serious illness, of encountering health care staff who failed to introduce themselves, engage with her, or even look her in the eye. She launched the #hellomynameis hashtag on Twitter attracting more than 48 000 followers and over a billion impressions. The campaign was endorsed by more than 400 000 Health Care Workers in the UK and abroad, including enthusiastic uptake in Australia.

Jennifer Doggett wrote about the initiative for Croakey in 2014, including the following quote from Kate

“…knowing the name of the doctor who is treating you can transform the experience of care, I firmly believe it is not just about knowing someone’s name, but it runs much deeper. It is about making a human connection, beginning a therapeutic relationship and building trust. In my mind it is the first rung on the ladder to providing compassionate care.”

Kate was awarded an MBE is 2015. She and her husband, Chris Pointon, also recently celebrated reaching their goal of raising £250,000 for the Yorkshire Cancer Centre.

In 2014, Kate wrote in the Guardian Newspaper,

“Legacy is a powerful motivator for me; I would so love to be remembered not as that poor young doctor who died of cancer before her time but as someone who inspired a change towards truly person centred healthcare for everyone.”

On twitter and in the mainstream media in the past days, she has been remembered in just that way. 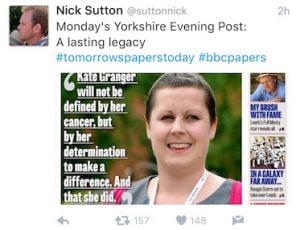 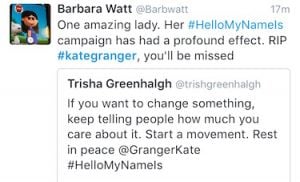