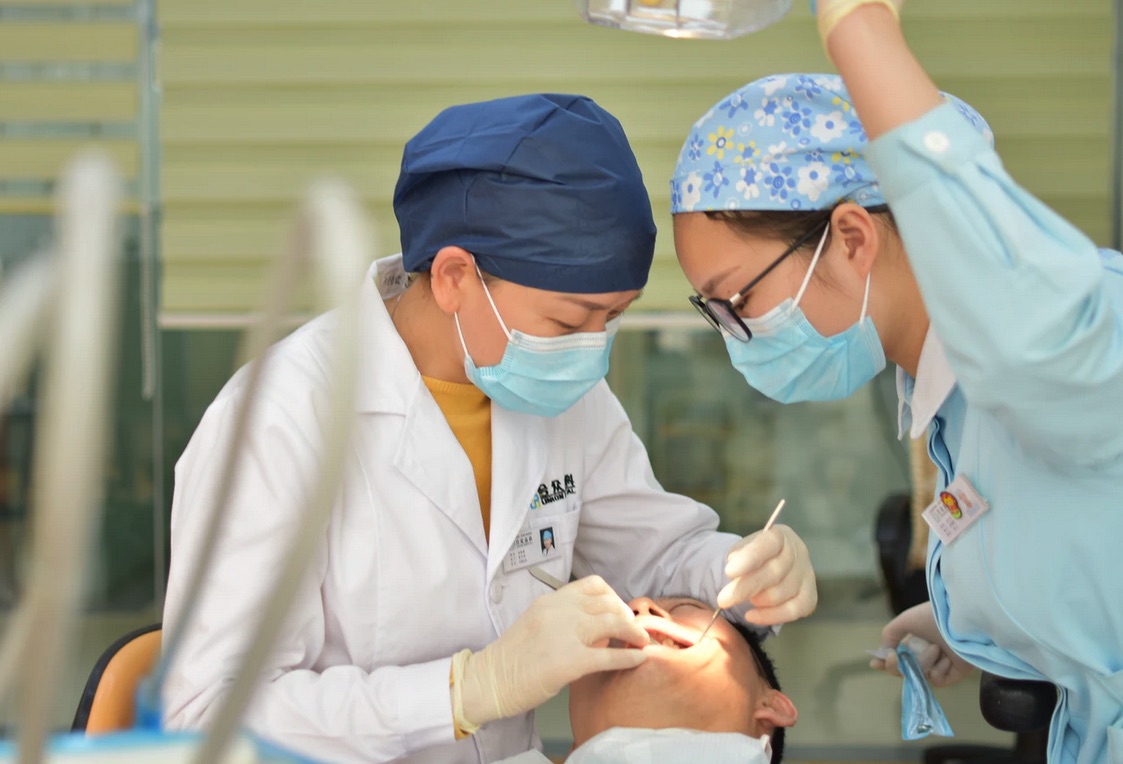 Introduction by Croakey: The Federal Government’s 11th hour reprieve for the National Partnership Agreement on dental funding has provided only short-term relief.

The Australian Dental Association and other groups had called for the agreement, which was due to expire on 30 June, to be extended for another two years to allow time for a national group of experts to be established to advise on a more permanent solution.

However, Health Minister Greg Hunt announced today the agreement would be extended for another year.

The Australian Healthcare and Hospitals Association (AHHA) welcomed the extension but said in a statement:

… can Minister Hunt assure Australians who rely on public dental services that we won’t be facing the same uncertainty yet again this time next year?

This destabilises health services, affects employment of staff and other contractual arrangements, and shows disdain for the needs of patients.

Now, more than ever, with so many people out of work or with reduced incomes, ensuring affordability and availability of dental health care is critical.

A longer-term vision for affordable dental health care is urgently required – and this must be more meaningful than the Minister’s claims today that affordability is supported through the Government’s subsidies for private health insurance.”

Meanwhile, the Shadow Minister for Health, Chris Bowen, writes that with millions of Australians delaying or avoiding dental care because of cost, a longer-term vision for oral health is required.

If COVID-19 has reminded us Medicare is the envy of the world, why is the Government shying away from long term certainty on public dental care?

Australians have come together magnificently over the past few months, despite having to physically stay apart.

This crisis has reminded many of the importance of a fair and equitable health system for all: the benefits of prevention, access to a doctor when we are unwell, and a hospital bed to fall into when we cannot care for ourselves.

And while these lessons are fresh on Australians’ minds, today the Federal Government has shied away from committing to a long-term vision and plan for oral health in Australia.

Today Minister Hunt has announced an insufficient extension for an essential feature of Australia’s public health system; a short one-year rollover of the agreement between the Commonwealth and the states to fund public dental care for those who can’t afford it.

To take away public dental services from next year would mean disadvantaged and vulnerable Australians would lose access to life-changing dental services and waiting lists would grow across the country.

And with waiting times for public dental already over 12 months in most states, someone who needs care today may not be seen under this scheme at all. 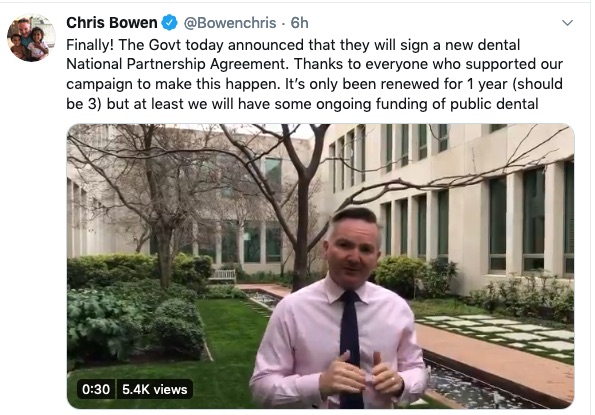 Since 1983 Medicare, the system designed to uphold all Australians’ right to health care, has constantly been under attack. And since Paul Keating introduced the Commonwealth Dental Health Program in 1994, Labor has fought for the Commonwealth to support the states in delivering dental services to those who rely on the public health system.

The current Government has already cut $283 million a year from public dental funding. In real terms that’s 465,000 fewer dental visits every year. Public dental times have risen across the country, with average waits of up to 21 months, and one in ten patients waiting up to three years.

While people who access public dental come from all age groups, we are mainly talking about older Australians. In 2018-19 623,900 Australians were placed on a public dental wait list. The biggest groups by age were 55-64 years (107,800) and 65-74 years (105,900). People in rural and regional Australia are also particularly exposed to long waiting times.

We spend almost $10 billion a year on dental services as a country, but leave it to the patients to cover the majority of cost.

People shouldn’t have to resort to “pay later schemes” or raid their superannuation to get vital dental care.

Two million adults who needed dental care in the past year delayed or avoided it because of cost.

This has a huge health and economic impact. Around 70,000 hospitalisations for dental conditions per year may be preventable with earlier treatment. This puts huge pressure on our hospitals. Without adult public dental services, this will soar.

We can’t abandon the 763,000 Australians who have accessed the scheme over the last three years, who may not otherwise access dental care.

This Government needs to guarantee the continuation of the National Partnership Agreement on Public Dental past 30 June 2021 and not leave Australia’s most disadvantaged and vulnerable Australians without dental care.

It also needs to use Commonwealth funding to encourage a focus on prevention and the shift to value-based dental care – already underway in some states.

Under the Morrison Government, out of pocket costs and waiting lists for essential health services are at record highs.

This Government needs to learn the lessons from the past few months of a fair and equitable health system, and commit to a full strength NPA now. Australians deserve long term certainty for affordable health care including dental health care. 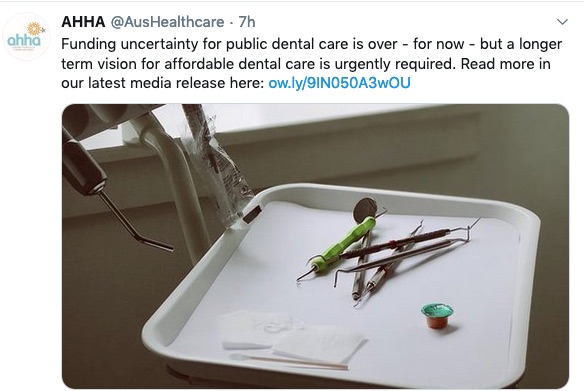 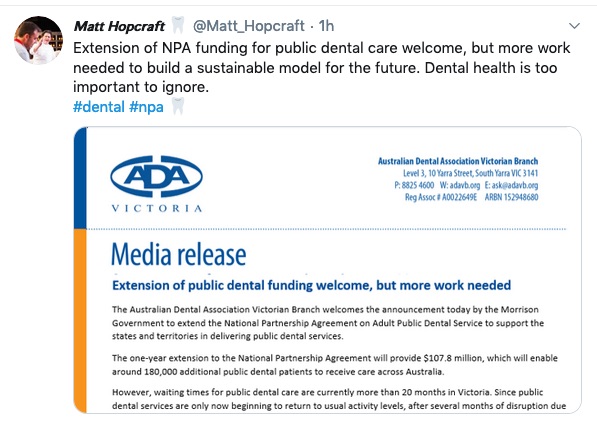