Home The Croakey Archives Croakey Conference News Service 2013 – 2019 2017 conferences #17APCC Laying down the euthanasia challenge to the palliative care field: are you ready? 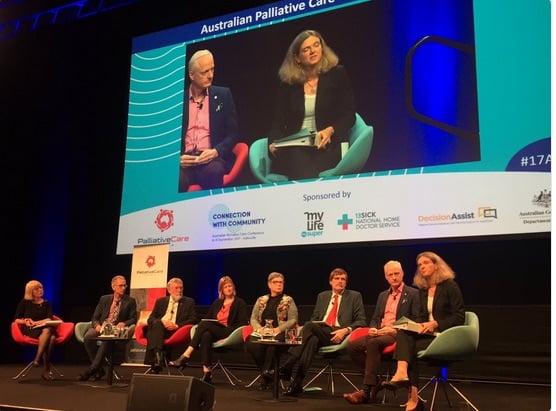 Laying down the euthanasia challenge to the palliative care field: are you ready?

It’s time for palliative care specialists and services to grapple with the reality of voluntary euthanasia and to consider what they would do when a terminally ill patient asked to be given lethal medication to relieve their suffering, according to experts.

The recent Australian Palliative Care Conference in Adelaide was told there is a potential implementation “void”, where non-specialists such as “fertility doctors or sports physicians” or physician advocates will step up to assist and encourage voluntary euthanasia, rather than palliative care specialists who are most equipped to provide end-of-life care.

The conference, hosted by Palliative Care Australia, staged a landmark panel discussion on voluntary euthanasia – believed to be the first it’s had at a national conference – as Victoria looks set this week to introduce enabling legislation.

It would be the first time such laws were in place since the Northern Territory’s short-lived euthanasia laws were overturned in 1997. 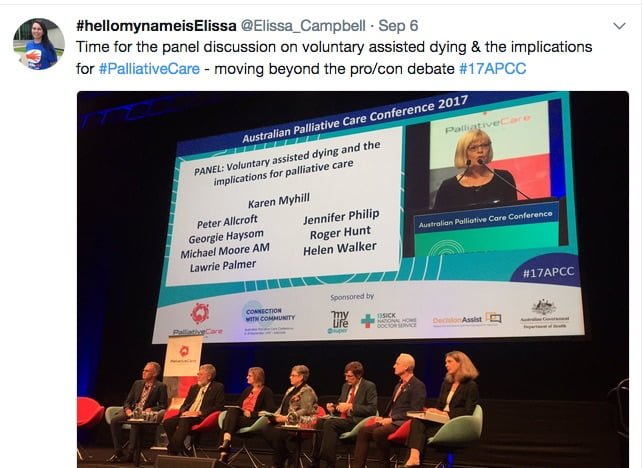 Many in the palliative care sector are opposed to voluntary euthanasia and are, the conference was told, reluctant to engage on the issue.

Conference participants also heard many other concerns about the implementation of voluntary euthanasia, related to “the devil in the detail” – worries about process, training, support, funding, ethical guidelines, litigation, and regulation.

However, some panelists believe the move towards voluntary euthanasia could benefit the palliative care field by increasing its profile and resourcing. Others feared it may divert attention and support for other palliative care patients.

According to the World Health Organisation definition, palliative care seeks to improve the quality of life of patients (and their families) with life-threatening illness, through the prevention and relief of suffering by early treatment of pain and other physical, psychosocial and spiritual problems.

The field of palliative care has traditionally opposed voluntary euthanasia, with many in the sector believing that better access to good palliative care would mean no-one needs to die in unbearable pain.

At the same time, there is confusion in the community about the difference between the two.

Some at the conference said they worry the introduction of voluntary assisted death will compound existing misconceptions of palliative care, where physicians are dubbed “Dr Death” and patients and their families fear that it involves interventions that might hasten death.

There’s also tension around the practice of palliative sedation in the last days or hours of life. For practitioners, it’s a nuanced approach involving careful prescription of a range of medications to ease pain and other symptoms, while many in the community believe that it “amounts to euthanasia”.

Where to draw the line?

As she opened the discussion on what Palliative Care Australia warned was “a complex, difficult and emotional issue” for the sector, panel facilitator Dr Karin Myhill urged presenters and delegates to “engage in respectful and open exchange of views”.

It was not, she said, to be a discussion about the pros and cons of voluntary euthanasia, but of the implications for the sector of its introduction.

The panel was largely medical, but medico-legal representative Georgie Haysom, from indemnity insurer Avant, cut through many of the concerns with a challenge to practitioners to think deeply about what they would do if asked to assist a patient to die.

How far would they be prepared to go, she asked, warning that miscommunication within teams and with families are “main drivers” of medico-legal action. She asked:

In a recent New York Times article, US palliative care physician Jessica Nutik Zitter describes how her stomach lurched when she faced her first request for assisted death after legislation was introduced to California last year. She wrote:

Our hospital, like many others at that time, was still in the early stages of creating a policy and procedure.

To me and many of my colleagues in California, it felt as if the law had passed so quickly that we weren’t fully prepared to deal with it.

It chimed with an earlier admission from Myhill, a psychiatrist at the Repatriation General Hospital in Adelaide, about how unprepared she was when a private member’s bill on voluntary euthanasia in South Australia last year came within one vote of passing. She said she realised it was suddenly “one minute before midnight” on the issue.

The lessons from Zitter’s article, according to clinical service coordinator Helen Walker, from Adelaide’s Daw House Hospice, are that a highly trained workforce and strong ethical guidance system will be needed when voluntary assisted death is introduced.

But she sensed a reluctance within her own professional network to engage on the issue. She said:

I look at my hospice team and wonder: are we ready? Have we really thought this through?

We need to prepare ourselves, we need to be knowledgeable and really understand the ethical framework that we work in (where) every case we will come across will be different,” she said.

Other speakers saw it as important to keep palliative care as “quite distinct” from voluntary assisted dying, and to ask the urgent questions if patients express a wish to die.

When faced with a patient seeking assisted death, palliative care specialists should take the opportunity to ask “why now?”,” she said.

“In the past, maybe some of us have just batted back, said it’s not legal, really shut down the conversation.

“Instead I think we really need to frame this as… an opportunity to engage in some very deep reflection and exploration for that person who is clearly suffering.”

Dr Peter Allcroft, a respiratory physician and palliative care senior consultant at the Repatriation General Hospital, said he was wrestling with multiple nuances, complexities and details that he felt had yet to be addressed.

Topmost, he said, was his concern over who might respond to voluntary assisted death requests if it was not palliative care, one of the few specialties with multi-disciplinary teams able to provide complete assessments of patients at the end of life.

“If not us, who then?” he said, adding that it “may scare you to know that the first doctor to utilise medical assistance in dying in Canada was a fertility specialist”.

Asked later by Croakey where that was reported, Allcroft said he had heard it personally from a palliative care leader in Canada – there was no formal register to “track who is doing what”.

He said he had been reassured in some of his concerns by the work of the Victorian Voluntary Assisted Dying Ministerial Advisory Panel, which recently handed down recommendations on how best to create a “safe and compassionate” voluntary assisted dying framework.

But he said much still remained to be spelt out in detail in the legislation, regulations, and training.

It was one thing to be able to have the legislation and policy for voluntary assisted death, he said, and another to establish what to do at the service level. “We haven’t got that sorted yet”.

Some of his “as yet unanswered” questions included:

And warning that the assessment and management of patients requesting voluntary assisted death will be “time consuming and need to be repeated”, he asked:

“How will we ensure fair and equitable resources for all our palliative care patients?”

That was an issue for others. One delegate was concerned that public discourse on voluntary assisted death has been “too narrow”, led by a handful of “charismatic” advocates. She didn’t mention names but they no doubt include voluntary euthanasia champion Andrew Denton.

It was, she said, focused on the very small number of people who might opt to hasten their deaths versus the broader impact on society and on vulnerable communities, particularly the frail elderly, diverse cultural communities, and Indigenous people, who often already delayed seeking palliative care because they feared it involved euthanasia or hastening death.

“We’re living in a society where all lives are not regarded as equal,” she said to applause.

There has been a history of “fear mongering” around the issue, he said, including where Aboriginal communities were warned of a “second Holocaust” when the laws were in place in the NT.

Hunt was a member of the Victorian Voluntary Assisted Dying Ministerial Advisory Panel whose recommendations were described by the Victorian Government as among the most conservative in the world, with strong protections for conscientious objectors that go beyond those for abortion.

The panel’s report says enabling legislation will need to “clearly step out the request and assessment process in order to provide health practitioners with clarity about their obligations”.

It recommends that assessment of the eligibility criteria and conversations about voluntary assisted dying and end of life will require “specific experience” from medical practitioners involved.

Hunt later told Croakey that he believes opposition to voluntary assisted death in palliative care stems from its faith-based origins, and had “tended to overstate what could be achieved in relieving suffering”, plus an element of “this is our turf”.

But he said that having it discussed at a national palliative care conference meant there had been “some evolution and some maturity developing” in the sector, which would benefit it.

“The profile of palliative care will be incredibly boosted by this debate,” he said.

“People want to know that when someone does choose to have assistance to die, that every other option has been explored,” he said. “You can’t do that in an equitable way unless there is adequate funding.”

When he was Health Minister in the Australian Capital Territory, Moore introduced a euthanasia bill  in 1997 that was overruled by the Federal Government.

He said Allcroft’s warning that a fertility doctor had led the way on voluntary assisted death in Canada was for him “the most telling comment” in the panel discussion. He said:

The people in Australia who have the most skills to assist people in their dying are palliative care specialists. What they don’t, of course, want to do is actually assist people to die…

But if they step away from the decision altogether, it will be left to the fertility doctors or the sports physicians or others who don’t have the level of skills there.

If we leave it in the hands of someone who doesn’t understand palliative care, then they will be encouraging assisted dying instead of taking people through an appropriate palliative care process.”

Warning that voluntary assisted death legislation would need a serious lead time to discuss such issues – an 18 month implementation period is proposed in Victoria’s case – Moore imagined the questions to be put to a Health Minister in an Estimates review:

“Minister, you’ve given huge new responsibility to health professionals: how are you going to pay for it and how are you supporting them? How have you ensured equity of access?”

Moore told the panel that big issues will include funding, including likely cost shifting between states and territories and the Commonwealth (already signalled in this Guardian article, and training – ensuring that support, education, programs and guidelines are in place for clinicians).

He quoted Machiavelli that there is “nothing more difficult to take in hand, more perilous to conduct or more uncertain in its success than to take the lead in the introduction of a new order of things”. Moore added:

“What could be more challenging when we talk about change than being about ending the life of a person?” 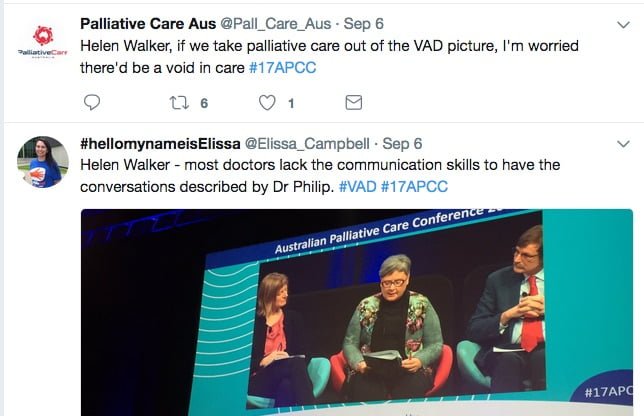 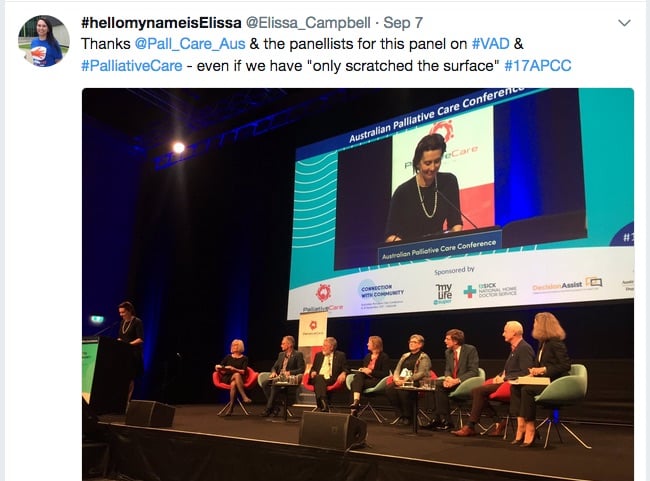 Michael Moore, CEO of the Public Health Association of Australia