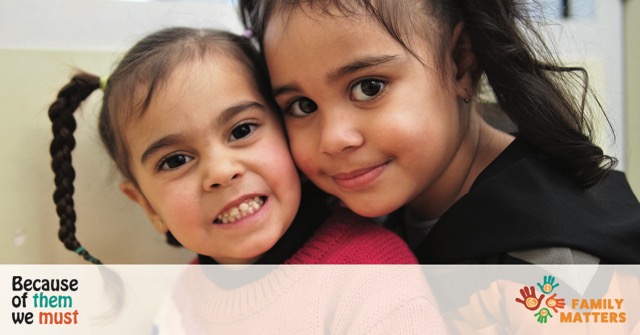 Introduction by Croakey: This week, May 20-26, is Family Matters National Week of Action. Community leaders, and more than 150 child welfare organisations from across the country, have joined together to draw attention to the fact that too many Aboriginal and Torres Strait Islander kids are being removed from family.

The group is calling for a comprehensive national Aboriginal and Torres Strait Islander Children’s Strategy, to eliminate the over-representation of Indigenous children in out-of-home care, and address the causes of child removal.

As part of the Week of Action, Family Matters asked leaders from across the country to share their reflections on what a new government should prioritise, what a national strategy to solve this issue should look like, and what future they’re working to help build for our children.

Below, Muriel Bamblett AO, CEO of the Victorian Aboriginal Child Care Agency, and Chair of SNAICC – National Voice for our Children, writes of the need to restore the capacity taken from Aboriginal and Torres Strait Islander families by the ongoing process of colonisation.

In order see this happen, she says, we need to work “side by side, with mutual respect and meaningful partnership” to build and rebuild the bridges between Aboriginal and non-Indigenous Australians, and create an environment where all Aboriginal and Torres Strait Islander children can thrive.

Today, Aboriginal and Torres Strait Islander children are 11 times more likely to be removed from their family and community than non-Indigenous children. In spite of this, we see more and more of our people and programs dedicated to turning this around and ensuring our children can grow up knowing who they are.

I believe an emphasis on prevention, community capacity building and cultural competence will go a long way to reversing the tragic increase in Indigenous child protection referrals.

I want to see our people strengthened in their ability to care for their children, not punished for being of a culture different to the mainstream white culture.

Before invasion, Indigenous communities had the capacity to live fulfilling lives and look after their children. However, this capacity was diminished by the process of colonisation.

Economic capacity was removed by changing the environment to make it suitable for colonial economic exploitation.

Societal capacity was diminished by forcing Indigenous communities to live on the outskirts of colonial society.

Capacity for looking after children was diminished by taking them away.

I implore the incoming Federal Government to have the courage to take up their mandate and to do things differently.

The complexity and depth of the issue requires a holistic national strategy if we are to make any real dents.

The incoming Federal Government has a responsibility to set an example by starting this process.

The path to a strategy that properly supports children and families, as well as the path to true reconciliation, must be navigated side by side, with mutual respect and meaningful partnership.

I know that bridging the cultural gap is an evergreen challenge.

But those bridges often fall down.

Many of us walked over bridges for reconciliation in the year 2000 only to have them fall down.

We need to have the courage and strength to continue to rebuild them.

The Family Matters campaign, developed to eliminate the unacceptable over-representation of our children in the child protection system, is a shining example of what trust, commitment and partnership from Aboriginal and non-Indigenous people can achieve.

Family Matters seeks to foster an environment where there is wellbeing, safety and stability for all children. For Aboriginal children this means fostering a greater sense of belonging, by growing up in family and community, and in a society that respects and values who they are as Aboriginal people.

If this goal becomes a reality we will have gone a long way in addressing the injustices and misunderstandings of the past. If we succeed in creating this new environment for Aboriginal and Torres Strait Islander children, we will have also succeeded in weaving together of our stories as both Indigenous and non-Indigenous peoples living on this land.

Because of them, we must try.

Adjunct Professor Muriel Bamblett AO is a Yorta Yorta and Dja Dja Wurrung woman, one of Australia’s leading experts on Aboriginal child welfare, has been CEO of the Victorian Aboriginal Child Care Agency since 1999, and is the Chair of SNAICC – National Voice for our Children. On Twitter @fam_matters_au #BecauseOfThemWeMust.

You can pledge your support and learn more here.