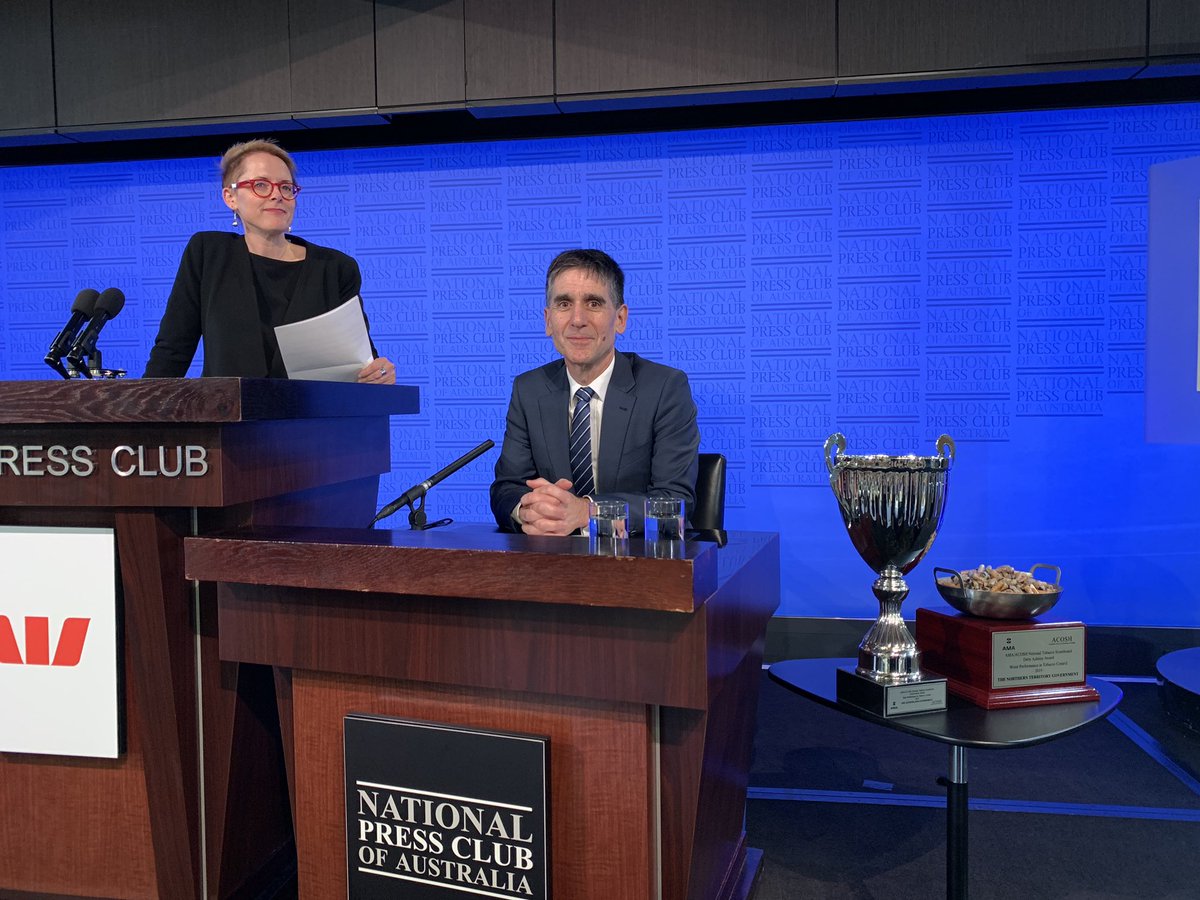 ‘Let’s just do it’: AMA President throws down gauntlet on prevention

AMA President Tony Bartone has thrown down the gauntlet on prevention, urging the newly-elected Morrison government to “just do it” on taxation of sugar-sweetened beverages and a volumetric alcohol levy, a preventative health promotion agency and national strategies on obesity and drinking.

Bartone delivered the challenge at an address to the National Press Club on Wednesday, telling attendees investment in prevention was not only good for health, it would deliver on the conservative government’s promises of long-term budget savings.

Australia had shown it could lead the world in preventative health through its tobacco control measures and Bartone said it was time for blue-sky thinking on challenges including obesity and alcohol use:

We need an overarching obesity prevention policy. This must include a tax on sugar-sweetened beverages, and restrictions on junk food advertising to children. Let’s just do it.

We need a new National Alcohol Strategy, including measures such as a volumetric tax and front-of-packet warnings on alcohol products. Let’s just do it.

We need a dedicated preventative health promotion agency. Let’s just do it.

We all need to do a lot more on preventative health to get Australians making healthier choices and staying fitter.

The Federal Government must once again take on a greater leadership role in tobacco control and reinstate the National Tobacco Campaign, with additional and sustained funding.”

In a separate statement to mark AMA Family Doctor Week, Bartone said Australia spent “woefully too little on preventative health — around two percent of the overall health budget”, and called for a “properly resourced preventive health strategy, including national public education campaigns on issues such as smoking and obesity”. He said GPs were best placed to manage preventative health.

The AMA also unveiled its ‘Dirty Ashtray‘ award-winners for 2019, naming Queensland best in show for tobacco control and the NT the worst for the fourth year running (and the 13th time in the past 25 years).

Bartone’s wide-ranging Press Club address also called for an overhaul of fee-for-service primary care funding, and emphasised that acting on the Uluru Statement from the Heart must be an urgent priority for the new parliament:

Giving Aboriginal and Torres Strait Islander people a say in the decisions that affect their lives would allow for healing through recognition of past and current injustices.

It would underpin all Government endeavours to close the health and life expectancy gap.

We need to also look at and address the broader social determinants. This requires cooperation and unity of purpose from all relevant Ministers and portfolios.

We must take out the politics and fearmongering. We must do the right thing by the First Australians.

The AMA welcomed the stated intent of the Minister for Indigenous Australians, Ken Wyatt, to hold a referendum on Constitutional recognition for Indigenous peoples.

It is time for unity. Let’s build on that.”

Bartone took the government to task on topics including mental health and the NDIS, aged care, private health insurance and public hospital funding, lamenting an election campaign bereft of any clear vision for the future of the health system.

Without “innovation, clever thinking and commensurate funding” Bartone warned that Australia risked a future where life expectancy would plateau or worse, waiting lists would blow out and the gulf between the have and have-nots would widen.

“The equity and access that underpin our system will become a distant memory, he said.”

We’ve clipped some of the tweets and reaction below. 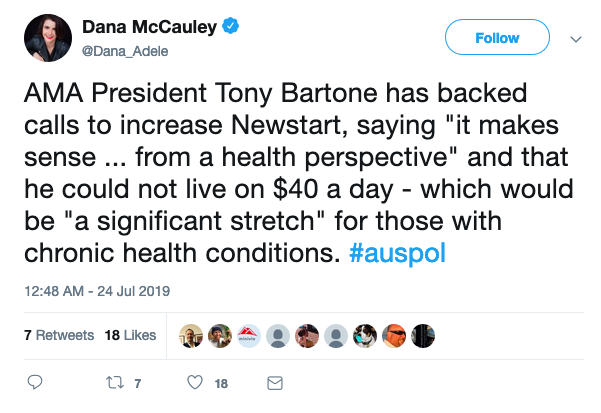 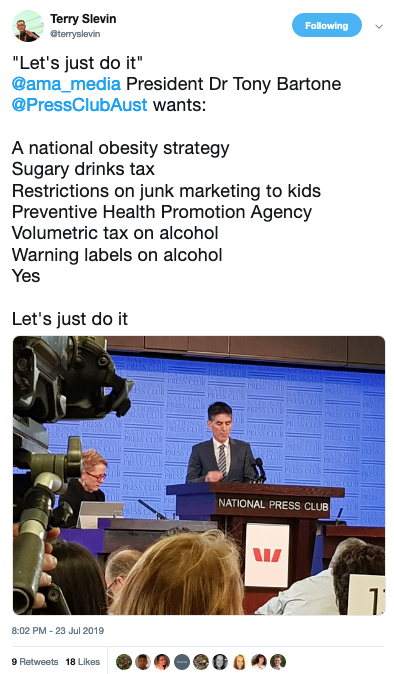 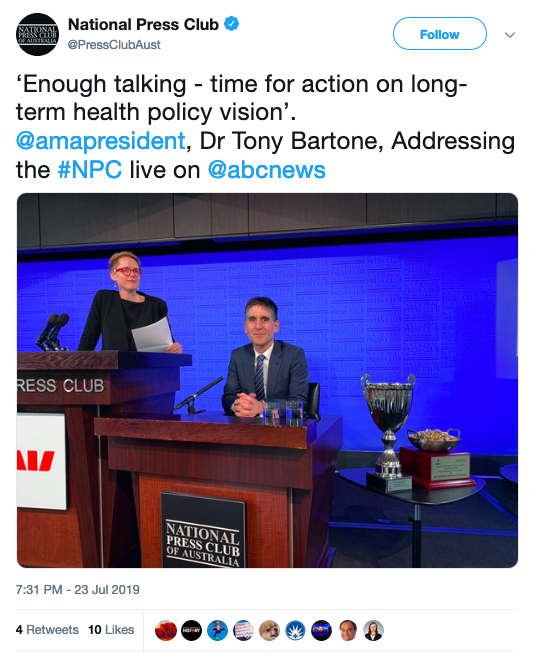 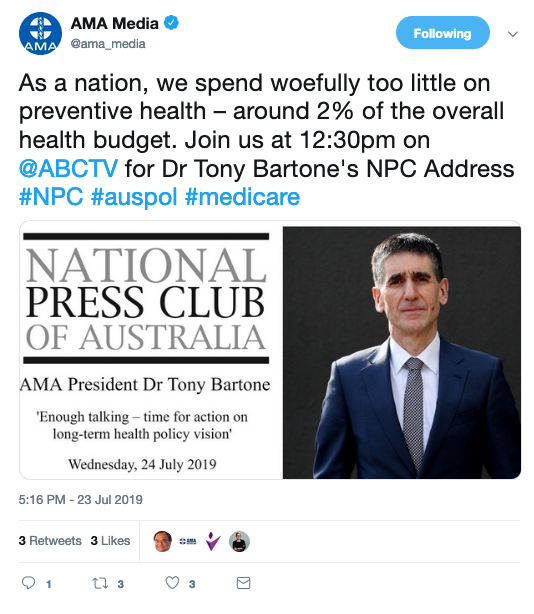 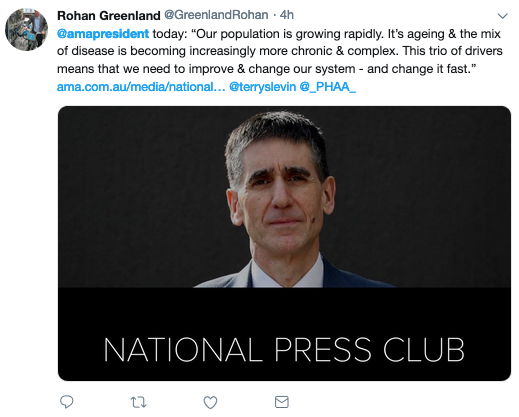 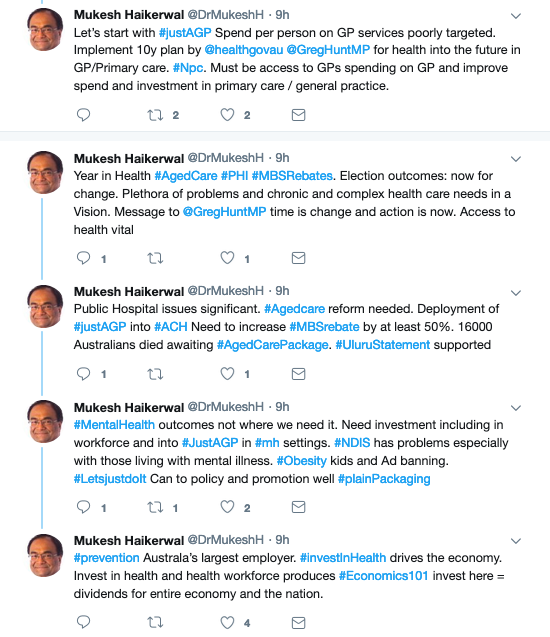