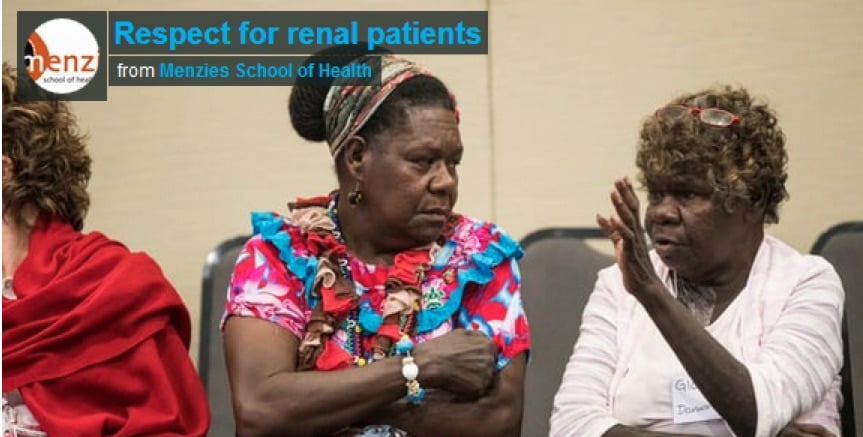 Listen to Indigenous patient experts on how to transform renal care

(This post was updated on 10 December to include a response from Indigenous Affairs Minister Ken Wyatt).

Dozens of Aboriginal and Torres Strait Islander people with chronic and end stage kidney disease and their carers have issued a comprehensive call to action for health services and federal, state and territory leaders to transform renal service delivery in remote Australia.

Patients and carers from across northern Australia recently shared stories at a special Darwin symposium about the overwhelming loneliness, distress, isolation and financial burden that many Indigenous people experience being treated for chronic kidney disease far from their remote homes and in a complex and often uncaring health system.

Their concerns and solutions are documented in a new report by the Menzies School of Health Research in Darwin: Indigenous Patient Voices: gathering perspectives, finding solutions for chronic and end stage kidney disease.

“The main message we want to send to the government is that we want to have our treatment on our own country,” they say.

The event was organised by Dr Jaqui Hughes, who spoke recently at the 6th annual National Health and Medical Research Council symposium on research translation, co-hosted by the Lowitja Institute and focused on Indigenous health.

Her big challenge, she told a panel session on Courageous Conversations, is to “be the doctor that your patients need you to be, not the one you necessarily want to be”.

Croakey’s report on the research comes amid news that the Ngurratjuta Aboriginal Corporation has donated an Albert Namatjira painting to an Alice Springs clinic to help it pay nurses to deliver remote dialysis services in the absence of proper government-funded health service provision for communities.

Meanwhile, the Northern Territory News today reported concerns from leading Darwin kidney specialist Dr Paul Lawton, who was also involved in the Indigenous Patient Voices event, about systemic racism in the health system that means Aboriginal people are missing out on kidney transplants. (See tweets at the end of this post).

Eddie Mabo’s daughter Betty Tekahika took her turn to stand and talk, telling the room what it means for Torres Strait Islander people to have to live in Cairns or Townsville for months or years to access dialysis.

“Their tears are running down their eyes. They want to go back home. They miss their family, they miss the lifestyle of the island, because they’re Islanders.

“They want to go back home. Where’s the government today, looking at the needs of the Indigenous people in the community?”

It was a common lament at this unique symposium in Darwin, led by Dr Jaqui Hughes, Australia’s only Aboriginal and Torres Strait Islander nephrologist, based at the Royal Darwin Hospital, and an NHMRC Early Career Research Fellow at the Menzies School of Health Research.

Held in September, the symposium sought to give a voice to remote Indigenous people being treated for chronic kidney disease and also to challenge the health system’s compliance with and commitment to National Safety and Quality Health Service standards about consumer engagement and the promise of better care for Indigenous patients.

It was organised after Hughes was this year elected to the Council of the Australian and New Zealand Society of Nephrology (ANZSN), “the first time there has been a voice like mine at the national policy level”.

So, in another first, the ANZSN meeting hosted an all-day patients’ voice session, where 33 “expert-patients and carers” – from regions across northern Australia, from the Kimberley to Thursday Island – sat down in a room with senior clinicians, policy makers and research leaders and shared their stories about living with chronic and end stage kidney disease.

“It was one-way talk,” Hughes said. The “non-patient-carer delegates” were invited to sit and respectfully listen without interruption until the expert patients had had their say, and then, in the final session, just to respond briefly or ask questions.

“The whole rest of the day was patients and their close support people like carers talking about the things that mattered to them, how they experienced care within the health system, about the devastating impact and consequences of kidney illness,” she said.

“We gave them a voice and this is what they came up with,” she said of the report, Indigenous Patient Voices: gathering perspectives, finding solutions for chronic and end stage kidney disease, which has major calls to action from governments and health services to address the “huge gaps” in health equity that cause such suffering.

Many of the conversations are also captured in four compelling videos: watch them here.

Hughes has briefed Indigenous Health Minister Ken Wyatt on the recommendations that have emerged from the report, which she says also provides evidence to support a Medicare Benefits Schedule Review recommendation to create a new item number to improve care for regional and remote Australians.

“We hope there will be transformational policy in response to this,” she said.

This article was updated on 10 December with this response from Minister Wyatt:

Turning around the tragedy of this disease is one of my top priorities.

I will say much more about this in the coming months, but I am totally committed to working with communities and health practitioners across our nation to reduce the impact of renal failure and, even more importantly, to prevent it happening in the first place.

This means solutions that help people now, but also grassroots strategies that will help ensure our men, women and families continue reaping the benefits in five, 10 and 20 years – for the rest of their lives.”

“It is a sad story and serious problem”

The report opens with patients describing key historic events that have shaped their lives, stories of family being relocated off country to settle in townships, children removed from parents and families, cultural practices and languages, as well as education and employment opportunities, limited or denied.

Patients and careers shared a strongly held belief that repeating the systematic forced removal of people from their homelands, in order to access health care (which has a central delivery focus), has not produced the designed health gains.

The report quotes many of the patient experts. One says: “We’ve got to leave our homes and come to Darwin. It’s a long way. It is a sad story. Think about it deeply, properly and seriously, because it is a serious problem.”

Patients talk of their loneliness and isolation, exacerbated by limited, restrictive and expensive accommodation options.

They talked about cultural breaches in being on another person’s country without invitation, the difficulty of navigating a very complex health system, of being exposed to racist attitudes, and the deep losses to communities back home who miss their presence in family and culture.

“Sometimes we have to live in the long-grass, because the hostels don’t have enough spaces and we have to move out when they have another booking.”

“Families living in Darwin (for dialysis) are missing out on ceremonies, funerals and other important stuff.”

The report says patients shared concerns across a wide range of areas – from the undermining of homelands (that play important national roles including border security and environmental and cultural heritage protection), particularly with the closure of key regional towns and the loss of critical health services, through to inadequate primary and secondary prevention strategies to inform people at risk of progressive kidney disease.

As well as issues around late diagnosis and poor information sharing, they talked about the vulnerability of being on the receiving end of health services they felt to be uncaring and which punished “non-conforming” patients.

But they also offered specific and holistic solutions, including:

Truth telling about systems of care

In the Courageous Conversations panel discussion at the NHMRC and Lowitja Institute symposium (covered in another Croakey article), Hughes recommended that delegates watch the 2016 Menzies Oration delivered by Labor frontbencher Linda Burney, on ‘Truth telling and generosity: Healing the heart of a nation’.

“She talked about truth telling and I think that’s where my courage is as a researcher,” Hughes told delegates.

But, she said, the big question for researchers is: whose truth?

That is what the Indigenous Patients Voice symposium and report aim to reflect – the truths of a community that “very clearly wants to be engaged in redesigning the health system to be the way it needs to be for them to succeed as patients living with this devastating chronic disease”.

“Systems are designed for metro places down south and rolled out across the country,” she said.

If Aboriginal and Torres Strait Islander people were ever invited to provide input into tertiary referral centres, that engagement was never sustained, and the results certainly never evaluated. Hughes said:

As a staff member in this industry, I would really appreciate if the system could support me to be the doctor that my patients want me to be.

There’s a huge cultural misalignment from a health care system that provides care to a community with completely different needs and ways of operating.

(As a result), things move slowly…but my patients don’t live that long for slowness to be effective.”

Hughes also told the NHMRC/Lowitja symposium about a successful intervention in Darwin led by the Royal Darwin Hospital, among dialysis-dependent adults to treat melioidosis, which causes sepsis and death in northern Australia during the monsoonal wet season.

It was an extraordinary research breakthrough, she said, with great potential internationally.

As well as publishing the research around the intervention – which involves giving a 20 cent tablet three times a week after dialysis – the research team has made two short videos to provide a plain language summary for patients and the general community. 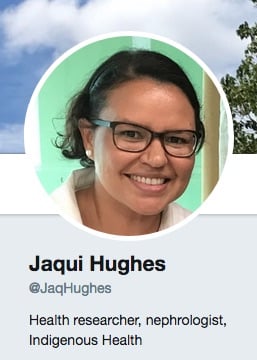 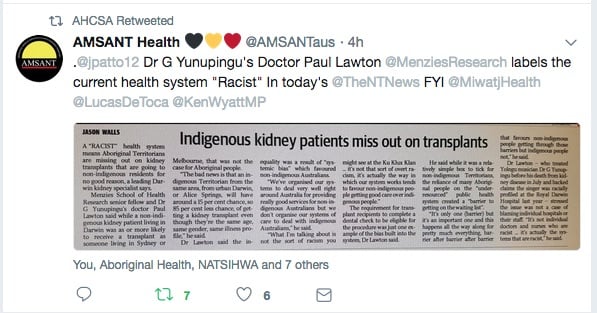