Home Croakey Conference News Service #VMIAC2019 Listen to the “canaries in the coal mine”, urges a psychiatric survivor 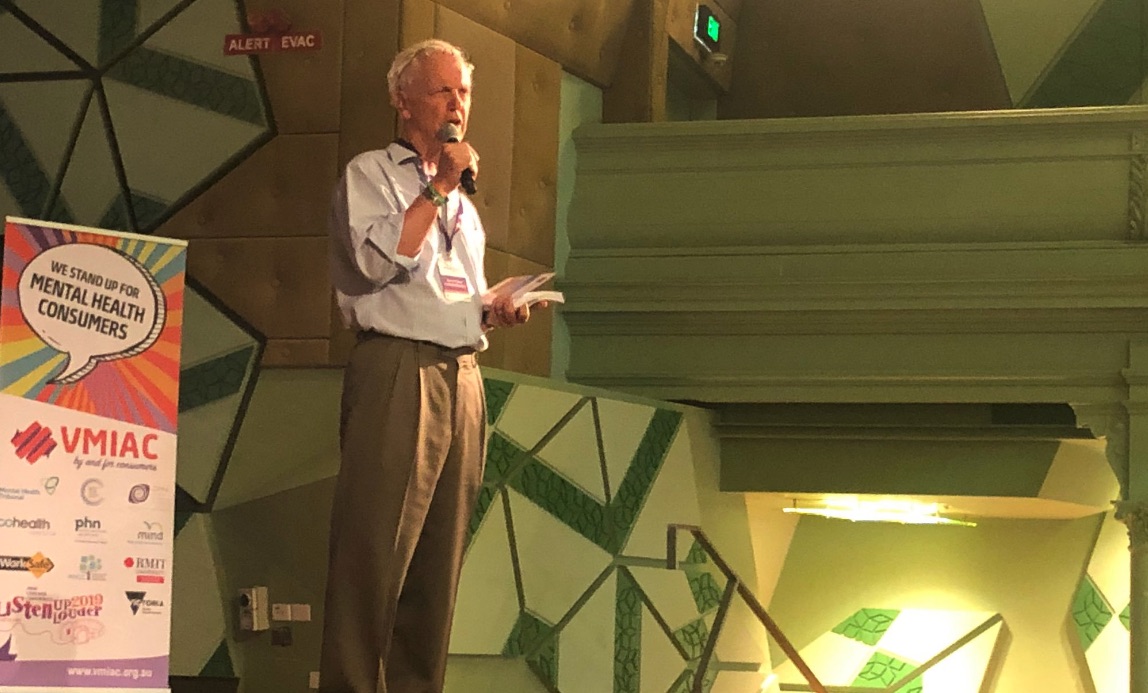 Listen to the “canaries in the coal mine”, urges a psychiatric survivor

United States psychiatrist Dr Daniel Fisher believes that people like him, who have been diagnosed and labelled with mental illness, are like the “canaries in the coal mine” – early victims and warning signs of the toxic culture that so many of us live in.

Fisher, who began his high profile career as a biochemist, says theories that mental illness illnesses are due to a chemical imbalance in the brain have “set us back in a lot of ways”.

“It’s just some of us are more vulnerable to the pressures of our culture,” he told the Victorian Mental Illness Awareness Council (VMIAC) biennial conference in Melbourne recently.

In a keynote address, he talked about the growing stresses of modern life: isolation, alienation from nature, extreme capitalism, climate change, and how much we could learn from the Indigenous cultures of Australia and the United States.

Some of us are more sensitive to those losses.

I think of us as the canaries in the cultural mine.”

Fisher describes himself as more of a psychiatric survivor than a mental health consumer – explaining the distinction as someone who sees the mental health system as beyond repair and needing to be replaced, versus those who are happy if they can make “a few little reforms”.

He now travels the world promoting and training people in what he calls Emotional CPR, which he has helped develop with the belief that people with mental illness, or what it describes as  emotional distress, can recover completely with holistic emotional support.

He has visited Australia a number of times and conducted two days of workshops hosted by VMIAC in the leadup to the conference.

Fisher is also a rare figure in mental health, a clinician who has lived experience and speaks out about it.

It’s a role and experience that he says has created many tensions and conflicts – some psychiatric survivors did not trust him, initially at least, because of his clinical training, while others in mental health have described his approach as “dangerous”.

He admits to being surprised, given his unorthodoxy, to have been appointed to the White House Commission on Mental Health in 2002 by President George W Bush.

Fisher began life with a privileged “white Anglo Saxon Protestant” background, attending the private school that was founded by his great grandfather, he told the conference.

He went on to study biochemistry in a bid to find a cure or treatment for his sister who suffered anorexia, but experienced psychosis in his mid 20s and was diagnosed with schizophrenia.

He was locked up, forcibly injected, and put in seclusion.

There he “vowed to myself that if I ever got out of this place I was going to become a psychiatrist and unlock every one of these facilities, so no one would ever have to go into them again”.

He did so, but it has not been a standard clinician journey.

Matters of heart and soul

Fisher said he was pleased to do his residency in Boston, not for the opportunity to study at Harvard Medical School, but because it was a base for the Mental Patient Liberation Front, a key group in the mental health consumer/survivor movement that worked to end harmful psychiatric practice and raise human rights issues.

Such groups and his studies confirmed his sense from his own lived experience that mental health issues were not traditional illnesses and propelled his search for different understandings and treatments.

Imagine if just two years prior you had been hospitalised, forced to take medicine and then you are the psychiatric resident [consultant] at an inpatient unit, told to ‘order medications for these people’.

Fisher said he is not anti-medication but he knows personally the terrible side effects that can arise and does not see medication as a solution in itself.  Nor does he wish to “bash” clinicians – “I’m a clinician myself” – but he believes the training is wrong.

He told the conference:

The more I delved into the biochemical basis of psychological approaches, the more I felt it dehumanises us, takes away our soul.”

Matters of heart and soul are now at the basis of his work in Emotional CPR and outlined in his recent book.

The program aims for a world where:

Fisher sounded a warning to #VMIAC2019 participants to beware being “co-opted” by the system, even when reform is being promised, as with the Productivity Commission inquiry into mental health and the Royal Commission into Victoria’s Mental Health System.

He said the US once had a very strong consumer movement “that got bought off and is now trying to reconvene”.

“Beware what you ask for,” he warned in reference to consumer calls  for more peer workers within the existing system.

“I know so many people who have gone into that, who feel so disempowered that it works against their recovery,” he said.

Now in his 70s, Fisher believes the mental health movement needs to go back to its roots, to once again learn from its early champions, people like Judi Chamberlin, who started Mad Pride, Leonard Frank, a survivor and opponent of electroconvulsive treatment (ECT), and Howie the Harp who founded many psychiatric survivor organisations.

And he said the problem goes beyond the mental health system, “it’s the larger culture we live in”. 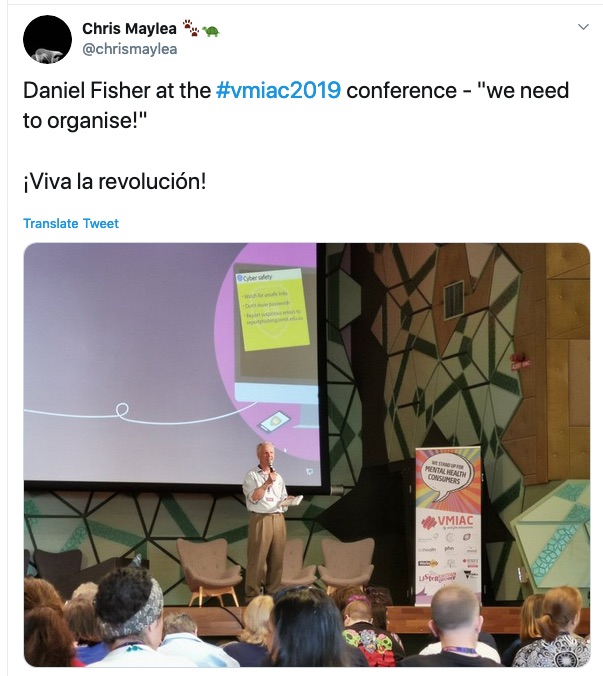