Home Indigenous health Looking Where the Light is: healing the scars of institutional sexual abuse will take courage and committment 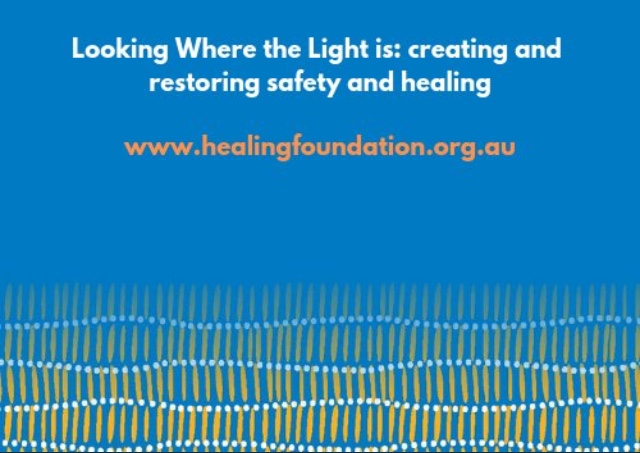 Looking Where the Light is: healing the scars of institutional sexual abuse will take courage and committment

Introduction by Croakey: On October 22, The Prime Minister, Scott Morrison, delivered a national apology to the victims of institutional child sexual abuse.

The apology occurred in response to the findings of Royal Commission into Institutional Responses to Child Sexual Abuse, which delivered its final report in December 2017.

Aboriginal and Torres Strait Islander people were over-represented among the survivors of institutional sexual abuse  – making up almost 15% of those who testified in private sessions.

Given the history of institutionalisation among members of the Stolen Generations, this is not unexpected but it does underscore the importance of reparation, restoration, and prevention of further harm, for affected Aboriginal and Torres Strait Islander communities.

The post below is from the CEO of the Healing Foundation, Richard Weston

In response to, and coinciding with, the Apology, the Healing Foundation released a report, Looking Where the Light is, which presents a cultural framework for addressing child sexual abuse in Aboriginal and and Torres Strait Islander communities.

Below, Weston explains why the framework is necessary, and outlines some of the work that needs to be done, for the apology to make a real difference in the lives of people who have suffered institutional sexual abuse, their families and communities.

It is, he writes, a job for all Australians.

Community capacity to overcome the challenges of colonisation in general, and sexual abuse in particular, has been severely diminished due to the breakdown of cultural structures and processes that previously prevented harm.

It was clear from interim reports from the Royal Commission into Institutional Responses to Child Sexual Abuse that not only did survivors need to be supported, but that we also need to create safety for children to prevent ongoing harm.

In response, The Healing Foundation has released a cultural framework and report, entitled Looking Where the Light is, to address child sexual abuse and protect our children now and into the future.

A framework for healing, prevention and restoration

We viewed the Royal Commission’s findings as critical for change and knew the breakdown in community structures as a result of colonisation and abuse, made children vulnerable.

The report details the appropriate frameworks to respond effectively and to heal and prevent harm and restore safety to the lives of children, families and communities.

An expression of regret that children were sexually abused in institutional settings is a good first step but it necessitates an honest response: one that takes into account the abuse itself and the years of suffering and trauma that have followed.

The apology was an important step for survivors and their families –  I heard as much in my role as a member of the National Apology Advisory Group.

To bear witness to the thousands of brave men and women who shared their stories of abuse at the hands of those they trusted was a difficult undertaking. But it was much harder on those who had to tell their story, some for the first time. Many whose cries as children were ignored or covered up.

The message from the more than sixty consultations was clear: an apology from the Australian Government was the first step to healing but it is what comes after, that really matters.

Stolen Generations survivors – some of whom were also abused in institutions – will watch with a healthy dose of scepticism and I don’t blame them. This is, for many Aboriginal and Torres Strait Islanders, the second apology from government in ten years.

We have seen the 54 recommendations from the 1997 Bringing Them Home Report largely ignored. Closing the Gap targets remain all but unmet. And, in order for our people to heal from the trauma of colonisation and atrocities that followed, we need more than just words.

A common theme from consultations was that victims want to see the recommendations from the Royal Commission implemented in full. They want the abusers brought to justice. And they want the institutions that protected them held to account.

The apology was a much needed step toward healing, for the victims and survivors who have been carrying trauma associated with child sexual abuse for a lifetime, and for the nation more broadly.

I believe the tone and language from both Prime Minister Scott Morrison and Opposition Leader Bill Shorten was sincere. And I have heard that echoed by others since. That in itself is a form of collective healing.

However, the victims and survivors will watch closely the ongoing response from government. As will we in the advisory group and the many support organisations across the country.

Acting on advice; investing in healing

As a result of colonisation and subsequent governmental policies, outcomes such as life expectancy, educational attainment and child mortality have been poorer for Aboriginal and Torres Strait Islander people than for non-Indigenous Australians.

Let’s remember also that these policies sought to improve the lives of Aboriginal and Torres Strait Islander people but did the exact opposite.

We know also that the impact of child sexual abuse is broader than the child. It can affect families, communities, cohesion and culture.

The Royal Commission made a number of recommendations in relation to advocacy, support and treatment services for survivors, including providing access to these services for as long as necessary.

Another recent report, compiled for The Healing Foundation by the Australian Institute of Health and Welfare, found that Stolen Generations survivors faced chronic health conditions, disability and alarming levels of economic and social disadvantage compared to other Aboriginal and Torres Strait Islander people.

These survivors have faced a lifetime of poor health outcomes, lower economic participation and, worse still, the ignominy of being judged, ignored or having doubt cast on their stories and lived experience of abuse and neglect.

We do not hold these declarations up to modern Australia as a totem of guilt, but rather to invite all of Australia to join in the healing of historical wounds.

It’s a shared history and we want to tackle it together. An approach to this collective recovery is a healing informed, trauma aware methodology. We need to train our workforce, both in the health sector and elsewhere.

I for one can appreciate the healing aspects found within a sincere apology from the heart. The Healing Foundation was born out of the apology to survivors of the Stolen Generations and from that gesture healing has begun on a national scale.

Perhaps one of the lesser known outcomes from last week’s apology was a small gesture that came from the Prime Minister and Opposition Leader to suspend Question Time in the afternoon. This followed a request from the reference group to do just that.

It had never been done before and while it was not a visible response it was one that showed a level of respect and concern for the ongoing wellbeing of victims, survivors and their families.

Talk is cheap. Healing is about prevention, and the failure to respond in this way will continue the transmission of trauma. Committing to action to reverse this trauma will take courage and a long term commitment.

Richard Weston is a descendant of the Meriam people of the Torres Strait. He has worked in Aboriginal and Torres Strait Islander affairs for more than 20 years. As well as holding the position of CEO of The Healing Foundation, he is a member of the National Health Leadership Forum and the Close the Gap Working Group. He is also an advisory committee member for the National Empowerment Project and the Aboriginal and Torres Strait Islander Suicide Prevention Evaluation Project.