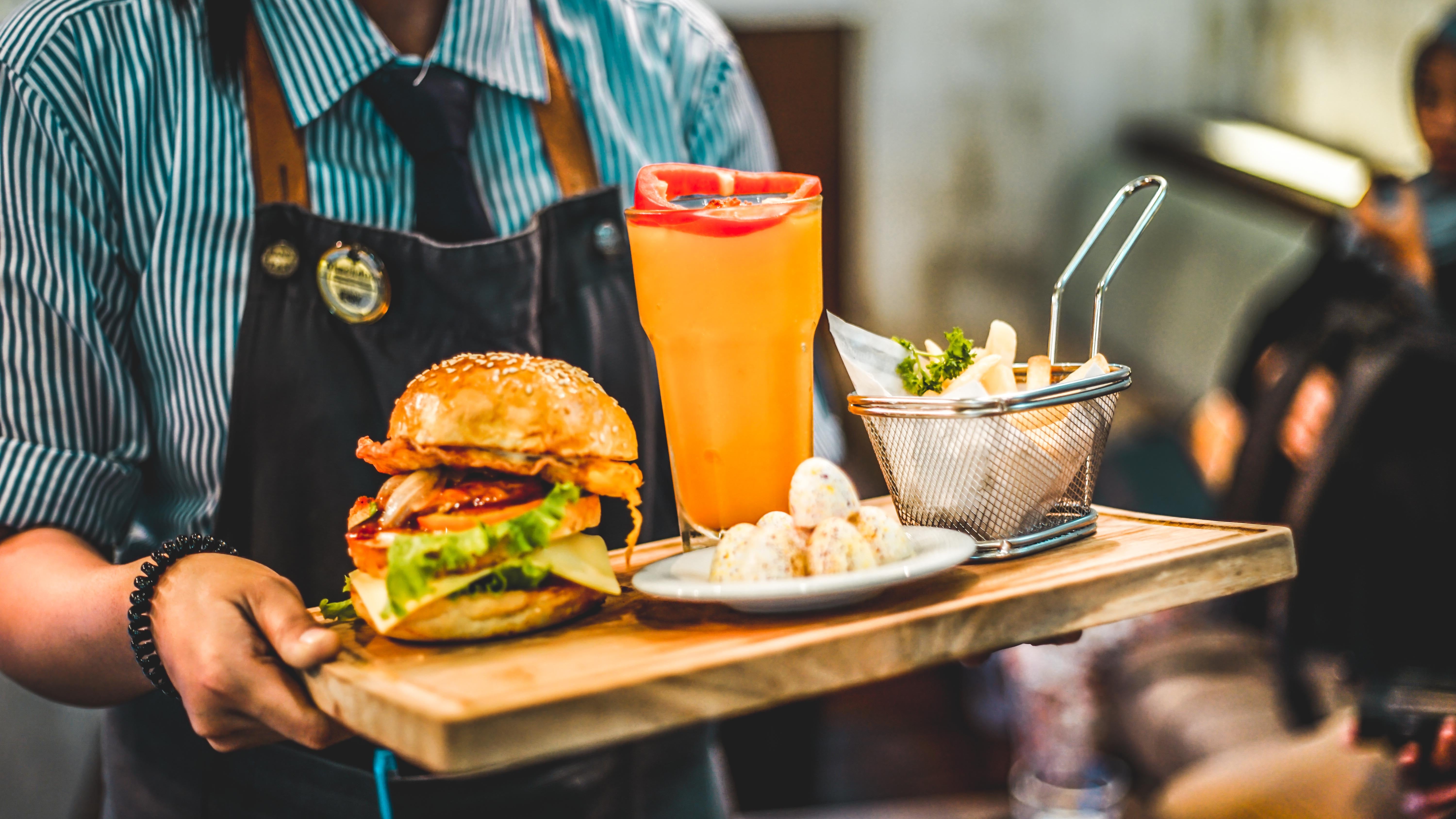 If you’re unable to work as much as you want, you can’t build your wealth, so it’s much tougher to improve your health. Bimo Luki/Unsplash

Australians with lower incomes are dying sooner from potentially preventable diseases than their wealthier counterparts, according to our new report.

Australia’s Health Tracker by Socioeconomic Status, released today, tracks health risk factors, disease and premature death by socioeconomic status. It shows that over the past four years, 49,227 more people on lower incomes have died from chronic diseases – such as diabetes, heart disease and cancer – before the age of 75 than those on higher incomes.

A steady job or being engaged in the community is important to good health. Australia’s unemployment rate is low, but this hides low workforce participation, and a serious problem with underemployment. Casual workers are often not getting enough hours, and more and more Australians are employed on short-term contracts.

Our team tracked health risk factors, disease and premature death by socioeconomic status, which measures people’s access to material and social resources as well as their ability to participate in society. We’ve measured in quintiles – with one fifth of the population in each quintile.

We developed health targets and indicators based on the World Health Organisation’s 2025 targets to improve health around the globe.

The good news is that for many of the indicators, the most advantaged in the community have already reached the targets.

The bad news is that poor health is not just an issue affecting the most vulnerable in our community, it significantly affects the second-lowest quintile as well. Almost ten million Australians with low incomes have much greater risks of developing preventable chronic diseases, and of dying from these earlier than other Australians. 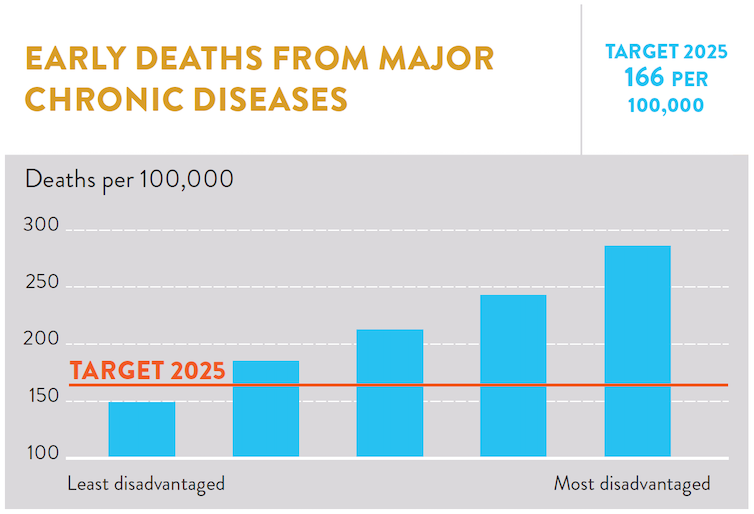 People living in the two lower socioeconomic quintiles (the poorest 40% of the population) are much more likely to be obese; less likely to do exercise; and much more likely to smoke. For these measures, the differences between the highest two socioeconomic quintiles and the lower two are stark. Obesity is 35% more prevalent, activity levels are 22% lower, and smoking rates – which are going down overall – are almost double. 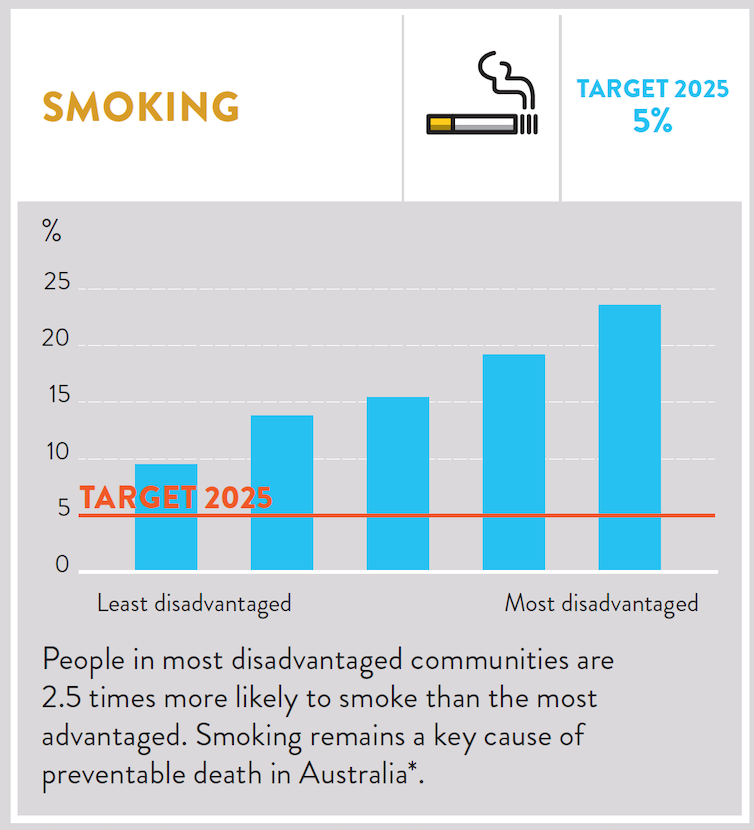 The targets in Australia’s Health Tracker are modest and achievable. Our target for obesity, for example, is to reduce the rate from 27.9% to 24.6% (the OECD average is under 20%). The most advantaged in the community have already achieved this target, while the rate in the most disadvantaged quintile is over 33%. 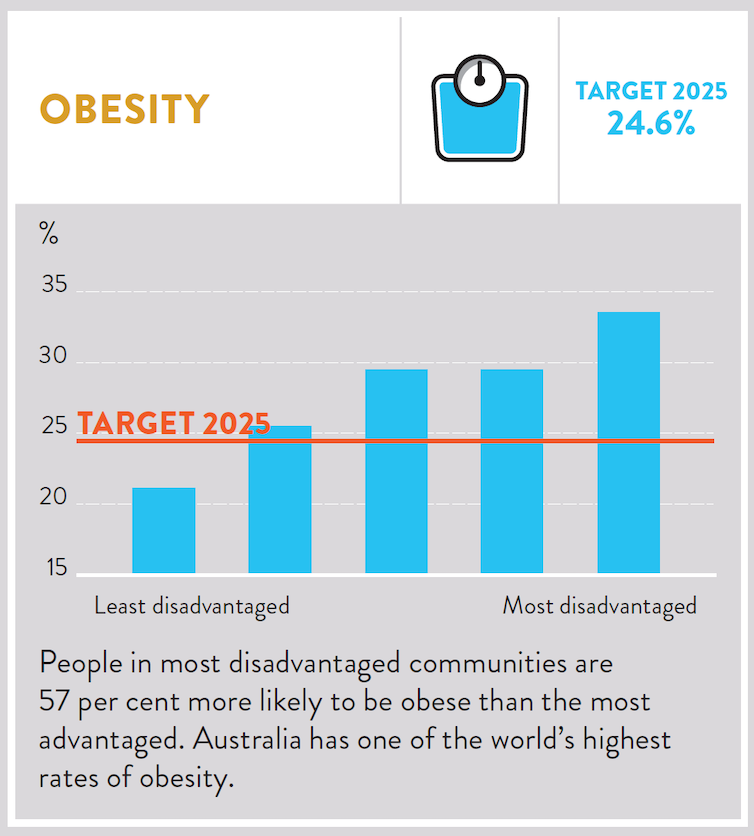 Disease rates are also higher. Bowel cancer is 30% more likely to be detected, even though fewer people are tested. Diabetes is 33% more prevalent in the two lower socioeconomic quintiles than the top two. 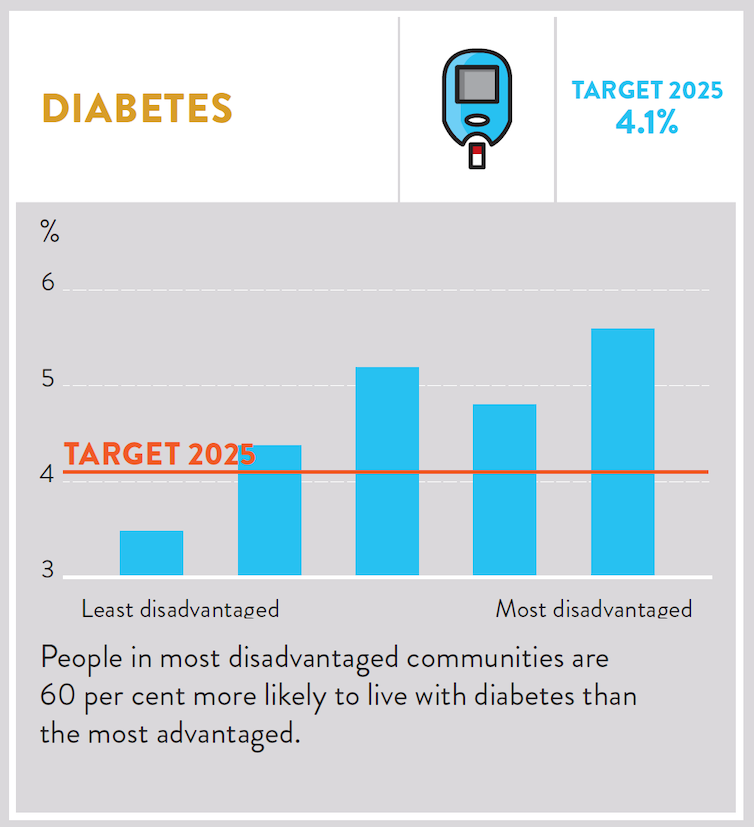 The differences in rates of early death between the lowest and highest categories are most staggering. People in the lower two socioeconomic quintiles (40% of the community) are:

Even where there is no disease causing death, suicide is much more likely the more disadvantaged you are. The suicide rate is 50% higher in the lower two quintiles than the top two socioeconomic quintiles. 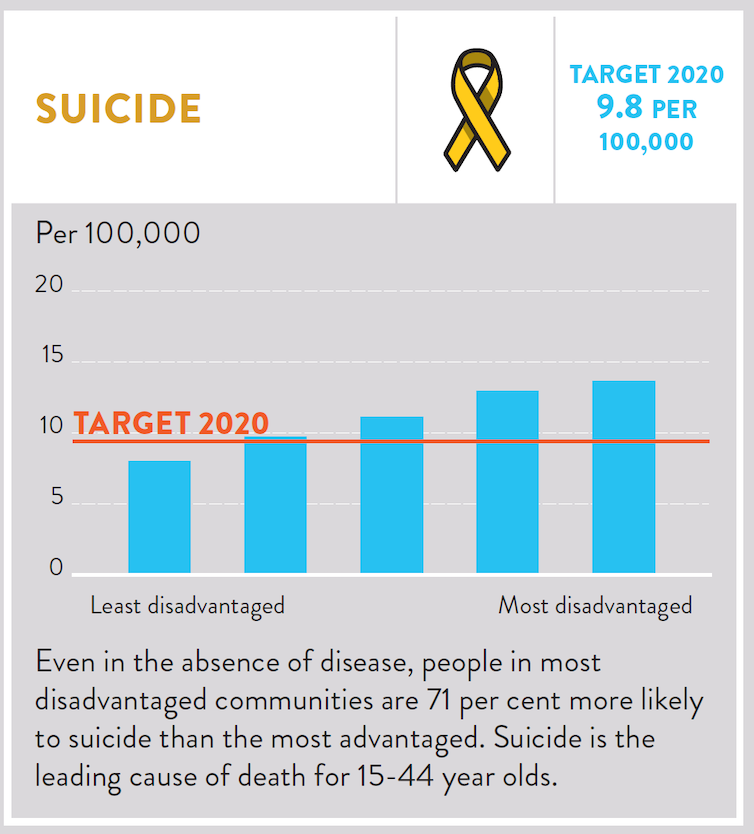 One in two Australians have a chronic disease and those on a low income are disproportionately affected. But, crucially, one-third of the disease burden is preventable.

What can we do about it?

Australia’s health services are well regarded internationally. Our expenditure on health services, 10.3% of GDP, compares favourably with that of like countries.

One glaring exception is investment in prevention and early intervention strategies. Only 1.3% of the Australian health budget is spent on prevention. This is significantly less than countries such as New Zealand, Finland and Canada, which spend around 6% on prevention.

Read more – How Australians Die: cause #1 – heart diseases and stroke

Improving health for people with low incomes and resources needs a comprehensive government commitment. We need to:

We need to tailor health care to prevention and early intervention for those most at risk, and we need to invest in healthy environments. Both are sound economic investments that will improve health, productivity and economic prosperity.