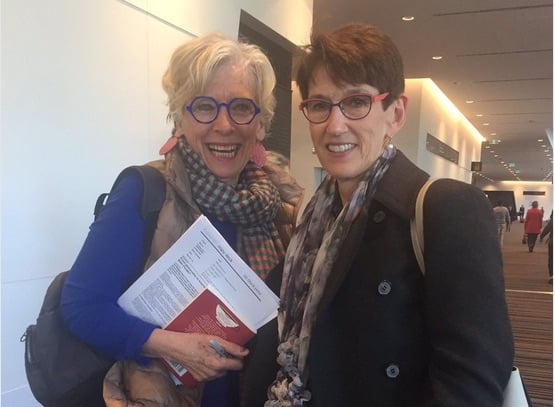 Maggie Beer calls for “revolution” in quality of food in aged care, hospitals and palliative care

Australian chef and food guru Maggie Beer is determined that food can and must be a pleasure to the very end of life – from the meals served in aged care homes and hospitals through to the taste of mouth swabs for dying patients who can no longer swallow.

“Food is medicine, the fuel of life. It’s what fires our appetite for life, no matter what age,” she said in a keynote speech to the Australian Palliative Care Conference in Adelaide last week.

One of Australia’s best known food personalities, Beer is on a mission to encourage aged care homes to serve food “full of flavour and nutrients”, where residents look forward to meals, and cooks and chef can take pride and joy in their work.

Food is, she says, one of the last things in our lives over which we get to exercise choice and receive enjoyment, so to serve meals that don’t taste or look good and aren’t good for you is an insult both to those who have to cook and serve it, and those who have to eat it.

“You might think it a utopian ideal but there is no place for institutionalised food anywhere, not just aged care, but hospitals, organisations, schools, mental health facilities,” she said.

“We need equal measures of pleasure and nutrition (from our food),” she says. “Pleasure has such a bearing on wellbeing.”

Beer is deliberately positive in her speech and on the website of the Maggie Beer Foundation which she established in 2014 with the motto ‘Creating an appetite for life’, showcasing and fostering innovation in recipes and in making good food available to those who can no longer chew or swallow.

She may not focus on the negatives, but they came through loud and clear in questions from the floor at the conference, packed with health professionals working in aged care, hospitals and in community palliative care, as well as having their own relatives in care.

Delegates talked of tasteless, overcooked mush served to those who can no longer chew, of inflexible eating hours for those undergoing treatments that affect their appetite, and of families on blacklists for bringing in their own home-cooked food.

Then there are the bigger challenges, among them what might be possible for patients who are fed through a percutaneous endoscopic gastrostomy (PEG) tube placed through the abdominal wall and into the stomach to bypass the mouth and oesophagus.

Sue Pieters-Hawke, who has become an Alzheimer’s Australia ambassador following the death of her mother Hazel Hawke, urged Beer to do something about the “bloody dreadful” mouth hydration products used for many dying patients in their final days or hours.

“Given these are the last things that many people taste, can you come up with something delightful?” she asked.

Beer accepted the challenge with alacrity, confessing she had not thought of that before. “It’s on my list,” she promised.

Hearing about one facility that served white toast and tomatoes for dinner one night, prompting protest action from a delegate’s 82-year-old aunt, Beer urged more uprisings, saying cooks and chefs are hamstrung by management, and residents often are reluctant to speak up.

The revolts are really important. A lot of residents in aged care now had such tough lives that they’re not demanding people, they’re accepting.

[Revolts] give the cook and chef something to work with, even if it’s to shame the CEO.”

Who are the champions?

Beer has long been a champion of good food, but her “turning point”, she says, came when she was appointed Senior Australian of the Year in 2010.

One of the 700 speaking invitations she received that year was to a conference for 1,000 chief executive officers of aged care facilities. In preparation, she visited many facilities, finding some good, some bad, and some very bad.

Her address to the CEOs did not go down well.

“I thought I had a pile of solutions but it wasn’t the right time and most of them hated me,” she laughs now.

But that conference led to her forming the Maggie Beer Foundation and to meetings with HammondCare Chief Executive Dr Stephen Judd.

Beer’s advice to Judd was to find a restaurant chef with a passion for food and people, so the aged care group appointed, as Executive Chef and Food Ambassador, Peter Morgan-Jones, a former chef at Sydney’s Berowra Waters Inn, Bennelong and MG Garage, who had famously cooked for the British royal family and catered at Wimbledon.

The Foundation also launched regular workshops and masterclasses for cooks and chefs from aged care homes across Australia, to give them inspiration, listen to their problems, help to find solutions and build connections and respect.

The masterclasses bring in auditing experts who “debunk” what chefs and cooks are wrongly told by management about what they can or can’t do. Astoundingly, Beer said, there are safety standards for food in aged care “but not one for quality”.

And on the final day the CEOs are brought in to the masterclasses, to show what can be done and “to advocate on the chef’s behalf”.

“The cooks and chefs are considered the lowest of the low in many (aged care) places and in the food industry – the very reverse of what it should be because these are the people who can make such a difference in the lives of the people they cook for,” Beer said.

To effect change in aged care, she says, requires “two champions for good food: the chef and the CEO, and it needs to be a concerted effort with everyone (in the facility) involved, from the carers to the nursing staff to the ground staff, and changing the culture.” 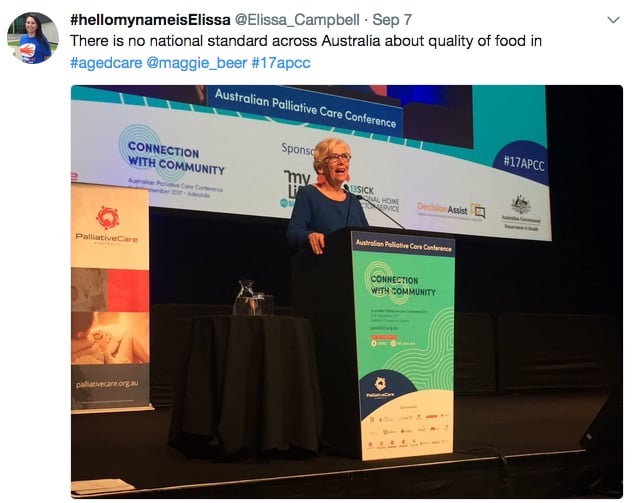 As all those with elderly or ill relatives or who work in aged care and palliative care know, eating can involve complex food and digestion needs.

Beer is almost licking her lips as she reads about one of Morgan-Jones’ innovations to the conference. You would swear from her tone that she was reviewing the work of a five star chef in a gourmet restaurant.

“First, he created a liquid, blending fresh strawberries and ice-cream,” she begins. “Then it’s passed through a sieve, with a binding agent added to help the formation of bubbles.”

So far so good, but then the hint of something different.

“Using a small clean battery powered fish pump, plastic tubing and a pipette, he frothed the liquid into delicate foam,” Beer continues. “You spoon it off, and you can actually smell the fresh strawberries and the ice-cream. You can put it on the tongue, and it just disappears into nothing, like a flavoured water bubble.”

She is referring to something known as “molecular air”, designed by Morgan-Jones, who was moved by the story of a friend’s 14-year-old son who has been fed through a PEG tube in his stomach for eight years.

It’s “a way of delivering flavour and fragrance through tiny bubbles that the boy could safely savour on his tongue”, Beer says.

Morgan-Jones has written two cookbooks for people who find it difficult to chew and swallow, or use cutlery – maybe because of dementia or a physical limitation like arthritis or a stroke. See some recipes and find out more here.

He is now working on a cookbook for people receiving palliative care – in collaboration with Professor Roderick MacLeod, a senior staff specialist in palliative care and conjoint professor of the University of Sydney, who is based at HammondCare’s Greenwich Hospital, and other professionals – an occupational therapist, dietitian and speech pathologist.

It’s due to be published in Palliative Care Week in 2018.  Beer said:

This is really important stuff. There are also issues with appetite loss, a metallic taste often caused by chemotherapy, which can impact on people’s enjoyment.

While they may not be able to eat a meal in the same way as they used to, we have to find ways to enable them to get pleasure from food again.”

Like so many at the conference, Beer talked in presentations and the lunch and dinner breaks about her own experiences with death and dying, including her distress at having her mother die interstate, “without me at her side”.

“That will be with me forever,” she said.

Happier experiences were the around the death of her mother-in-law, who was cared for closely at home by two daughters, both nurses, and an aunt who had a most beautiful funeral, buried in a cardboard coffin, upon which all her grandchildren had drawn, and with most of the service delivered in song. “So our spirits soared,” she remembered.

For her own dying days, Beer talked about wanting to have speakers beneath her pillows so she can listen to music and podcasts, “of all the things I wish I had known about in life”.

Asked whether it is time for the hipsters to take over the kitchens of nursing homes and hospices, to bring on menus of “smashed avocado”, Beer said there were complications other than tight operational finances and feeding issues.

Many of this generation’s residents have had “quite ordinary food lives”, she said, so cooks and chefs need to learn to trick them to make food both comforting and nutritional. “We put kale in the minestrone, lentils into the patties,” she said.

But she said, at the risk of being crude, the pending tsunami of the demanding baby boomers into aged care may lead aged care facilities into seeing good food as “a competitive advantage”.

It should also be an intrinsic part of palliative care. She said:

We all know that palliative care seeks to neither shorten nor prolong life but to improve the quality of life and manage symptoms so people can enjoy to the full the time they have left.

We need to look to ways to meet the social, emotional and spiritual needs as well as the physical symptoms.”

To provide relief from pain is a given, but so should be the pleasure of food and eating, she said.

“In palliative care, we can still provide pleasure in food.” 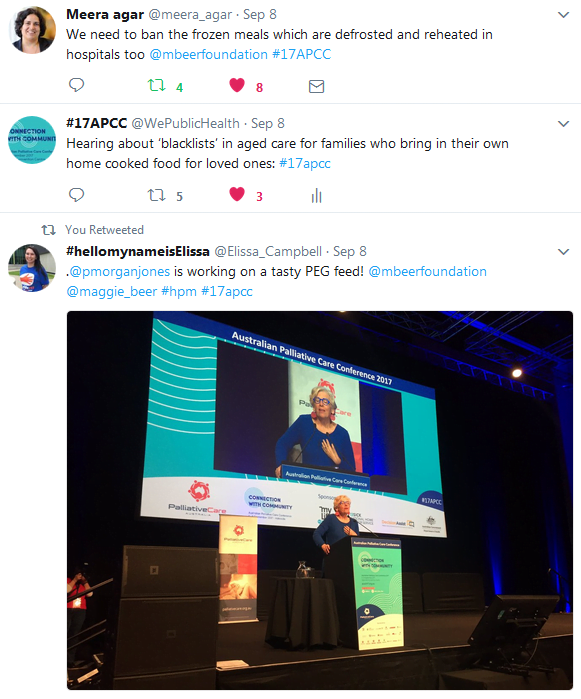 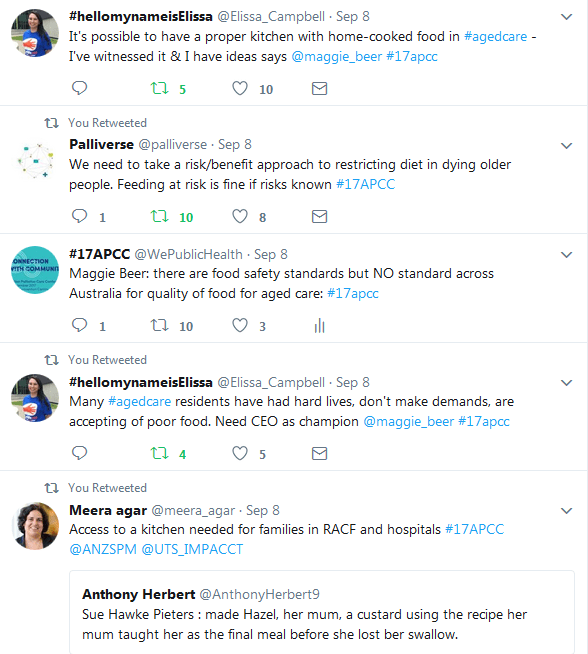 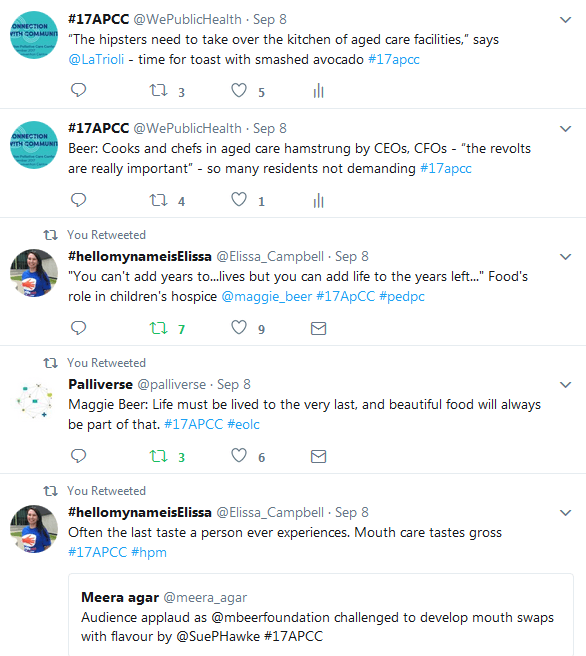 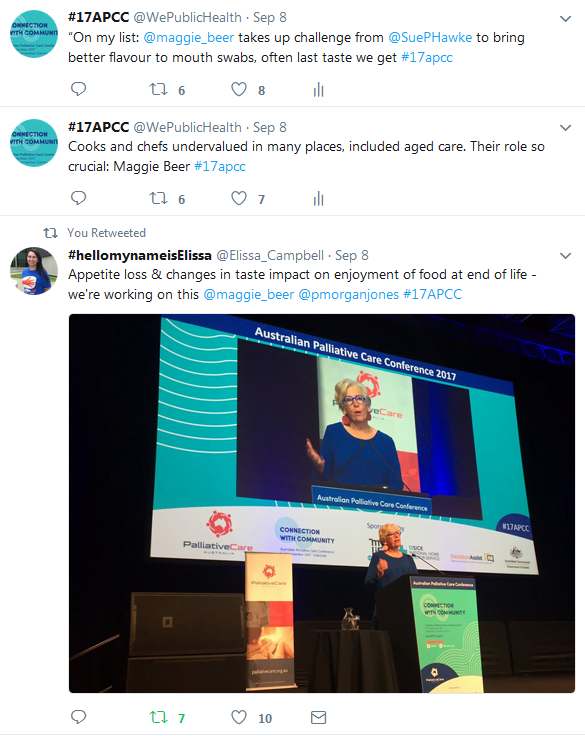 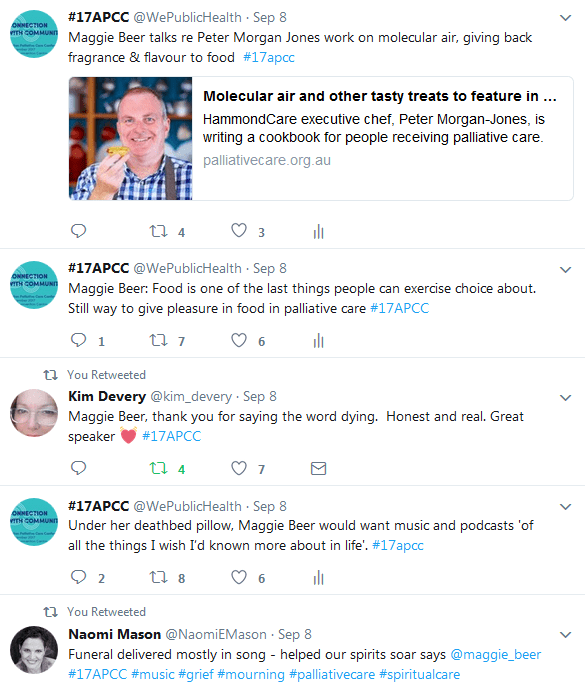 The conference wrapped up on Friday afternoon, but stay tuned as Marie McInerney has several more stories to file over the next week.