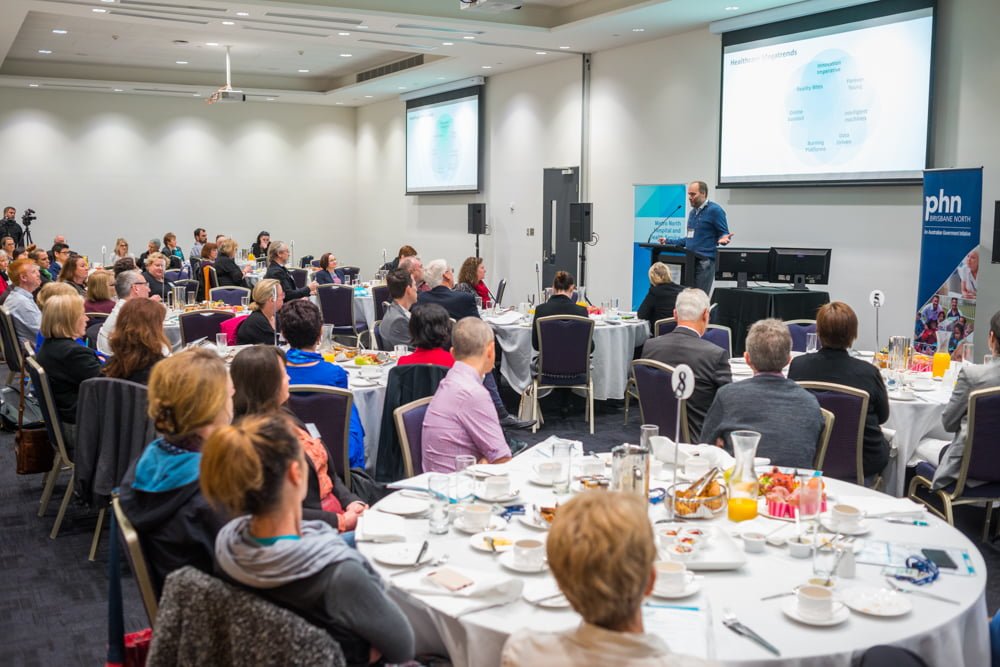 Man versus machine and the future of healthcare

Much is made of the promise that algorithms, machine learning and deep learning hold in the health care space, but how distant a reality is the intersection of artificial intelligence and health, and how prepared are we, really?

This was the focus of a recent Brisbane summit on so-called ‘megatrends’ in health themed Connecting for the Future, drawing hundreds of attendees to discuss developments at the frontier of health service delivery.

In this piece for Croakey wrapping the annual Metro North Health Forum, which is hosted by Brisbane’s Metro North Hospital and Brisbane North PHN, PHN public relations officer Simon Brooks captures some of the realities and reservations shared by delegates.

Automation will impact around half of all jobs in the economy and is coming to general practice, whether we are ready or not.

This was the view of Dr Stefan Hajkowicz from the CSIRO, who was keynote speaker at the Metro North Health Forum in Brisbane on June 19, in response to a question about his presentation on ‘healthcare megatrends’.

This forum is an annual event hosted by Metro North Hospital and Health Service (HHS) and Brisbane North PHN to highlight key local initiatives that connect and coordinate healthcare.

At the GP Breakfast preceding the forum, Dr Hajkowicz suggested some elements of work currently undertaken by practice receptionists seemed most likely to be automated in the future.

“Aspects of what you want to automate in your GP practice is all the boring and annoying stuff about getting to see one,” Dr Hajkowicz said, adding that this might include helping patients to select a GP of a particular gender or those with the shortest queue.

“I think you could have face recognition as I walk in the front door, which also does emotion detection [and] gives you a readout. It’s got to be private and confidential and well managed, but I wouldn’t see that as a problem,” he said.

A senior principal scientist in the field of strategic foresight at the CSIRO, Dr Hajkowicz is also director of the Data61 Insight Team.

This is a group of Brisbane based researchers and consultants who examine trends, risks and opportunities with a focus on the digital economy.

One of several megatrends Dr Hajkowicz and colleagues have identified is the impact of innovative technologies and processes that make healthcare more efficient.

Chief among these technologies is artificial intelligence (AI) and he cautioned that while “90 percent of what you hear on AI is hype, the 10 per cent that isn’t can change your whole profession”.

He quoted studies showing the risk of automation on doctors and nurses roles was quite low, but said, “…there would be quite a few other professions in healthcare where there is a higher likelihood of that occurring.”

“Generally we want to bring on this automation. This is also a huge cost saver in the healthcare system and improved quality of service to patients if done well, but we don’t lose the people. We want to transition them.”

After unexpectedly undergoing abdominal surgery in the USA recently, Dr Stable was keen to share his views on innovation and the human experience.

Dr Stable recounted a study into radiography several years ago that showed patients preferred the reassurance of interacting with a person, rather than a machine.

“And I think this is what general practice is about: knowing the person, knowing their whole picture. And so I personally wouldn’t be worried about automation taking up primary health care and most of what we do in hospitals,” he said.

Mr Drummond said Metro North HHS was also planning for future health needs by looking at the areas of growth, both geographical and clinical.

“To prepare for the megatrends at a local level, we have mapped out a plan for the next 15 years, which includes infrastructure, workforce development, clinical models, and research and innovation,” he said during the opening plenaries.

“It’s really important that, as we are training the clinicians of the future, that we have them understand the paradigm that we’re now faced with, and the opportunities,” he said.

Connecting for the future

Much of the remainder of the day was organised into three concurrent streams, which further developed the Metro North Health Forum’s ‘Connecting for the Future’ theme.

Popular with attendees was a session that encouraged participation with sector leaders in the creation of a better health system for older people.

Professor Don Matheson, the General Manager of the joint PHN and HHS Health Alliance, led an interactive presentation with audience members seated around and looking into a ‘fish bowl’, within which an older person’s healthcare experience played out.

The event closed with a presentation on ‘Value Based Healthcare’ by Nick Steele, Deputy Director General, Healthcare Purchasing and System Performance at Queensland Health.

Mr Steele said, since 2012, the local health system had focused on producing more volume, e.g. addressing waiting lists in hospitals, and that Metro North HHS had been very successful at this.

He said technically efficient hospital services delivered safety and quality, “but in terms of the outcomes for the patient they’ve been suboptimal”.

According to Mr Steele, the system needed to look at allocative efficiency and particularly, “how we allocate our resources in a different way to maximise the benefits for the residents of Queensland”.

“And that’s what value based healthcare is hopefully going to enable us to do, is to start to look more at producing activity in the right time, in the right location – not necessarily within an acute hospital – and actually undertaking the right procedures and interventions,” he said.

Simon Brooks is a public relations and healthcare communications professional based in Brisbane, and is currently working in Commissioning and Communications for Brisbane North PHN

Keynote presentations and videos from the Metro North Health Forum are available here, and you can catch up with the Twitter debate at #health2gether.