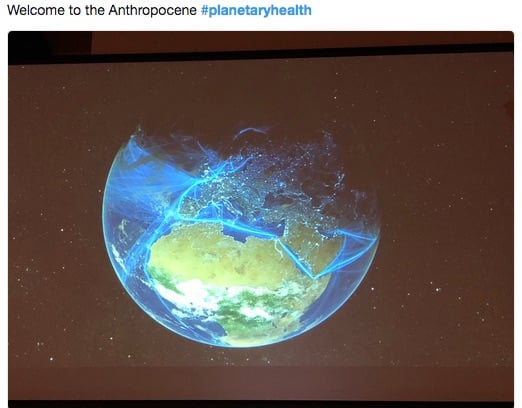 Marking “a milestone in the history of planetary health”

High-income countries like Australia need to urgently reduce per capita resource consumption to about 20 percent of what it is now, according to a prominent public health expert.

In an article in The Lancet coinciding with the official launch of the University of Sydney’s new Planetary Health Platform, Professor Tony Capon says the central challenge for planetary health is to greatly reduce per capita resource consumption in high-income countries (HICs) to make room for further sustainable development in other countries.

“If everyone in the world lived as the average Australian does, we would need four or five planets,” said Capon.

At the recent launch, much was made of the University being the first in the world to appoint a professor of planetary health. But perhaps the more important point is that it has taken so long for this to occur, and indeed Capon urged that all universities should be making similar appointments.

Warm thanks to Dr Marion Carey for providing the report below on the event.

Beneath her article are tweet and video reports of presentations by Dr Richard Horton, Editor-in-Chief of The Lancet, Professor Tony Capon, and Dr Helen Clark, former Prime Minister of New Zealand and former Administrator of the UN Development Programme. Her speech launching the Planetary Health Platform can be downloaded here, and will also be published in full at Croakey as part of our end-of-year series on climate and health.

On 14 December, the University of Sydney launched its Planetary Health Platform, which aims to “safeguard the health and wellbeing of current and future generations by building knowledge and capacity for the transformation to a sustainable world“.

More specifically, the concept is to:

A panel of speakers addressed a packed audience at the Charles Perkins Auditorium.

Dr Richard Horton, Editor-in-Chief of The Lancet, defined planetary health as “ the health of human civilisation and the state of the natural systems on which it depends.”

Globally in terms of years of life lost we seem to be improving, he said, yet we live in a more dangerous world. He talked about sustainable development, including the principles of intergenerational equity, the oneness of life and the symbiosis between life and our planet. He reminded us of the urgent transformation that is needed in our values and practices in recognition of our interconnectedness.

The challenges he set forth were in imagination (looking at how we define prosperity differently), knowledge (including cultural knowledge of humanity) and implementation (acting on knowledge). He spoke about the Planetary Health Alliance (PHA), a consortium of over 70 universities, NGOs, institutes, and other organisations committed to advancing planetary health.

Horton quoted Sam Myers, the PHA Director, as saying that we need a renaissance in how we define our place in the world, that we need to reject the narrative that relentlessly acquiring new things makes us happy, and embrace happiness as coming from the people and places we love and our interconnectedness.

He also quoted Stephen Boyden: “While the main threats to humankind today are the consequences of the human aptitude for culture, our only hope for overcoming them lies in this aptitude”.

The new Professor of Planetary Health, Tony Capon, spoke next. He reminded us that the connection to environment in medicine dates back to the time of Hippocrates. He then talked about his vision of what the platform is aiming to achieve – “safeguarding the health and wellbeing of current and future generations through rethinking the way we feed, move, house, power and care for the world” .

Vice Chancellor of Sydney University, Dr Michael Spence, talked about the platform encouraging transdisciplinary collaboration across all university faculties. He noted that we have traditionally developed sophisticated methodologies and tools to hone in on questions that aren’t always the most important ones and focused on publishing papers that few people read. The big questions need multidisciplinary work and we need to reimagine now what is needed for human flourishing.

To conclude, Dr Helen Clark, former NZ PM and UNDP leader spoke eloquently about climatic disasters, our passing of safe operating spaces for humanity and how current environmental degradation now threatens to reverse gains in human health. She harked back to the Ottawa Charter for Health Promotion of more than 30 years ago, which set out prerequisites for good health, including a stable ecosystem.

When asked what evidence matters, she answered: that which leaves no excuse for bad public policy!

The Planetary Health Platform is an encouraging initiative, and a great reminder of the urgent need for transformative action but also the groundswell of work that is now focusing on this great challenge.

• Dr Marion Carey is a public health physician, an adjunct associate professor at the University of Notre Dame School of Medicine Sydney and a member of Doctors for the Environment Australia. 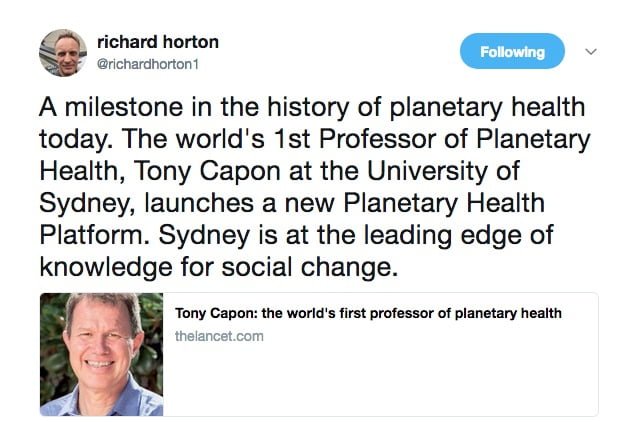 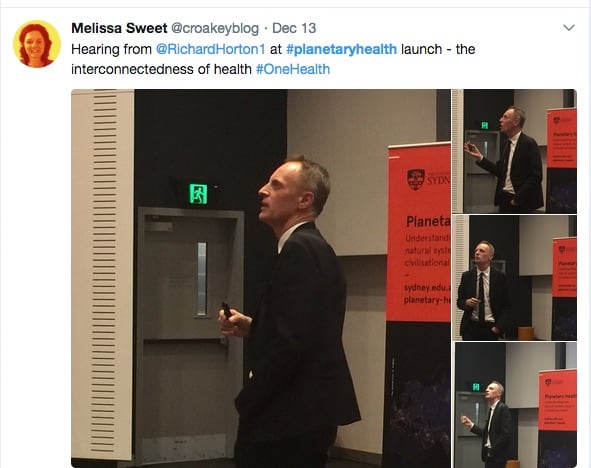 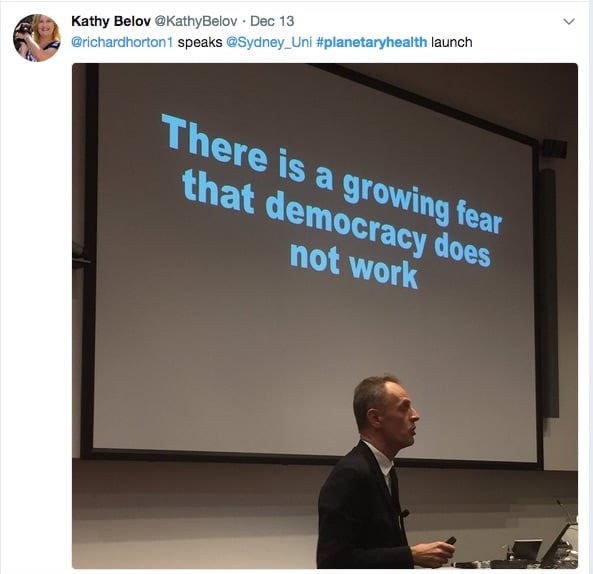 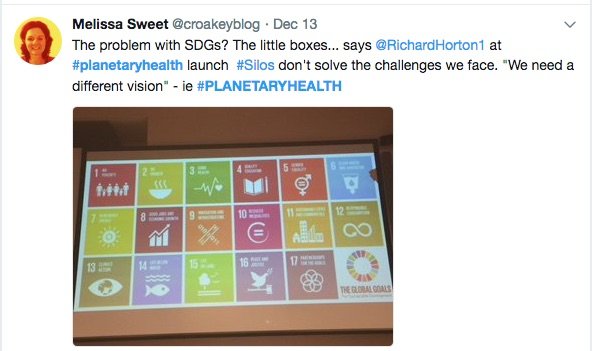 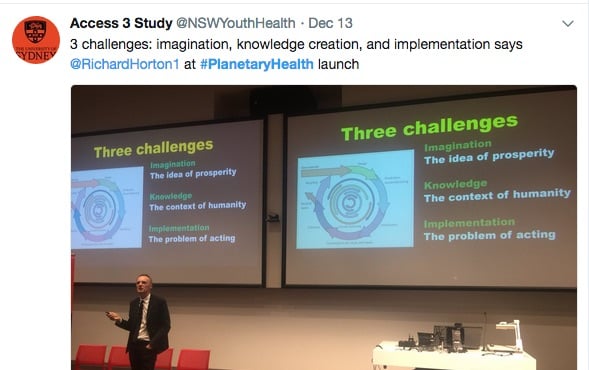 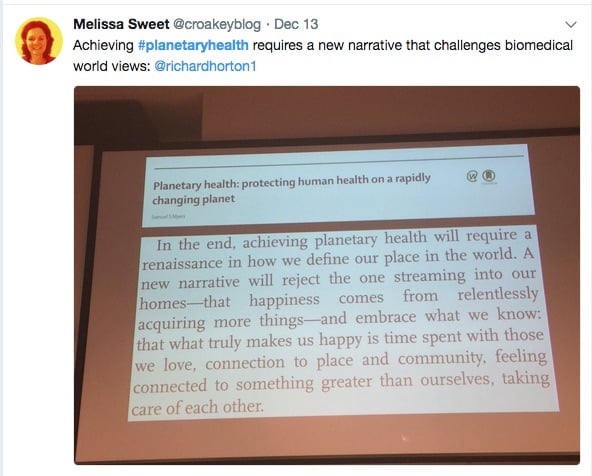 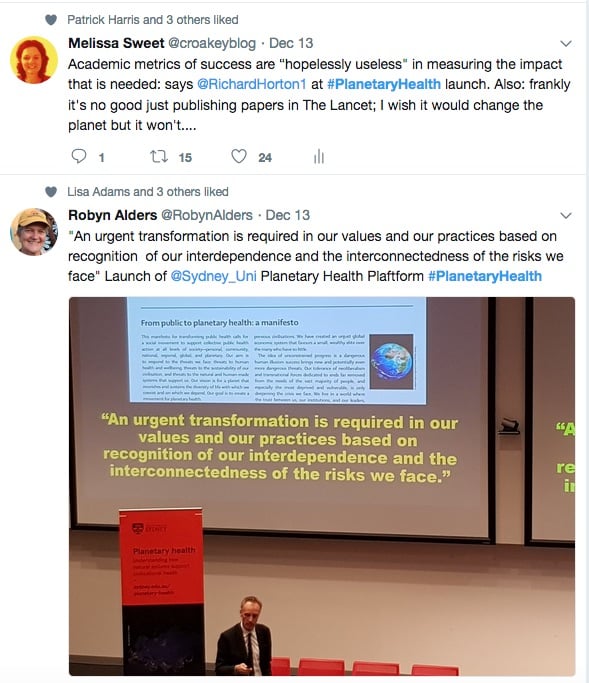 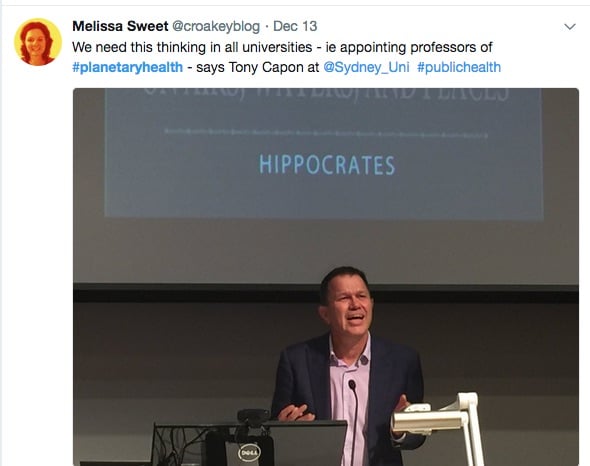 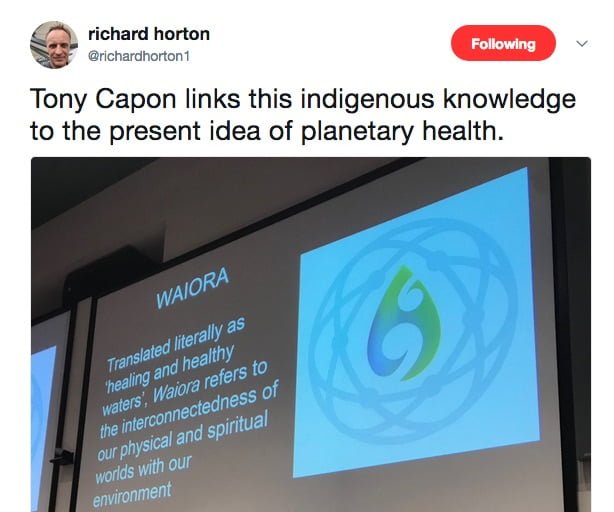 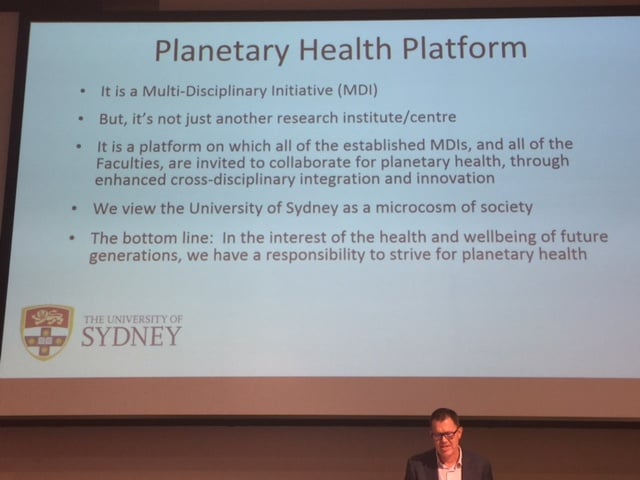 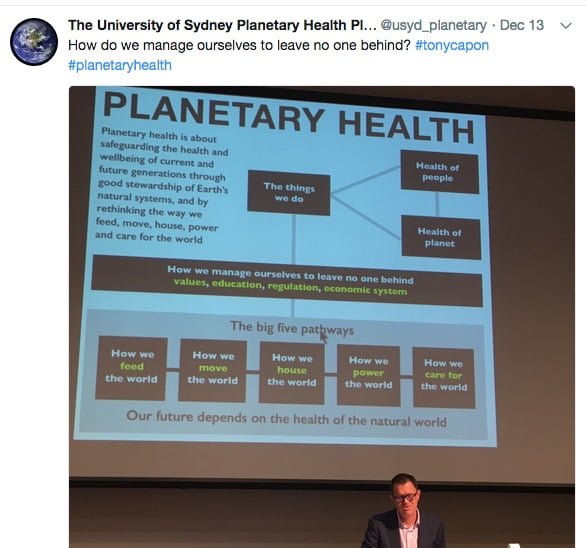 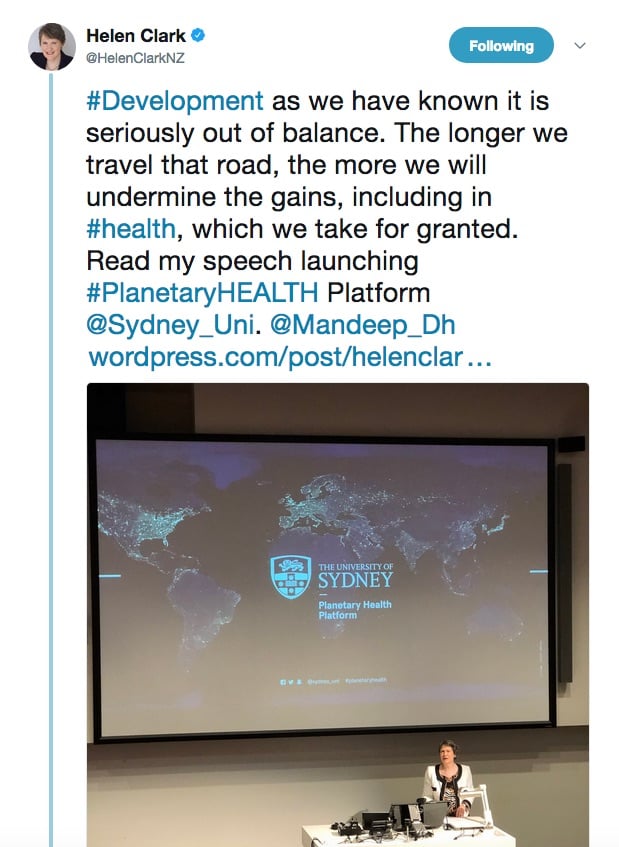 Thanks to Croakey’s creative director Mitchell Ward for broadcasting these interviews from the launch via the Periscope app (they have had almost 1,000 views in total, as of 21 December)

Watch this short film shown at the launch

The importance of Indigenous knowledges for planetary health was raised during the presentations and panel discussion.

Croakey readers may be interested in this new paper, On the Importance of a Date, or, Decolonizing the Anthropocene – and this interview conducted by Croakey earlier this year with Professor Kyle Pows Whyte: Decolonising Climate Science. 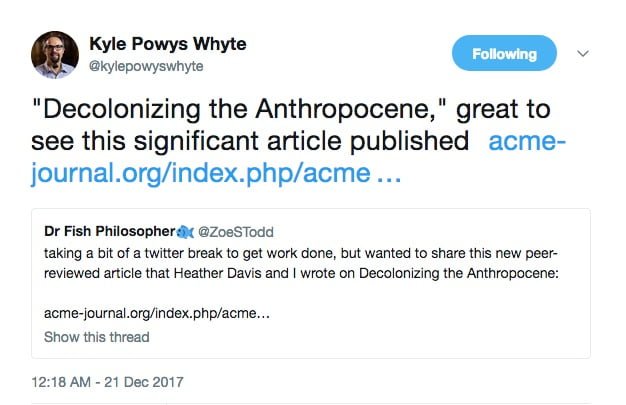 This Croakey article is published as part of an end-of-year mini-series on climate and health.

See the previous article in the series: Land clearing – a health threat requiring action and leadership, in the NT and elsewhere

And stay tuned for the next article: Helen Clark’s Speech at Launch of Planetary Health Platform.