NACCHO creates a health-promoting Twitter storm: “Isn’t it about time we took health advice from the fast food industry?”

If you follow NACCHO on Twitter (@NACCHOAustralia), you may recently have seen some digital mischief – otherwise known as a health promotion campaign – that went viral: “Isn’t it about time we took health advice from the fast food industry?”

Below is one of the images that NACCHO’s national communications and media advisor, Colin Cowell, estimates have reached more than three million people over the past week in Australia, North and South America, Europe, Canada, South East Asia and the UK. 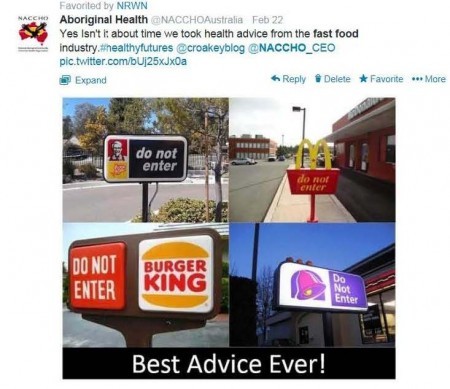 The campaign took off after he shared one of the images via Twitter. He said within one hour, hundreds of NACCHO followers (6500) including Father Bob (with 101,000 followers) and the ABC TV Gruen Transfer host Will Anderson (300,000 followers) had retweeted the  health message. “We estimated that by lunchtime we had reached over 1.5 million,” he said.

NACCHO also created targeted messages to regions and specific groups. Says Colin: “While the campaign uses humour, its message is very serious – that too much processed food with too much salt and fat is devastating for the health of Aboriginal people.” 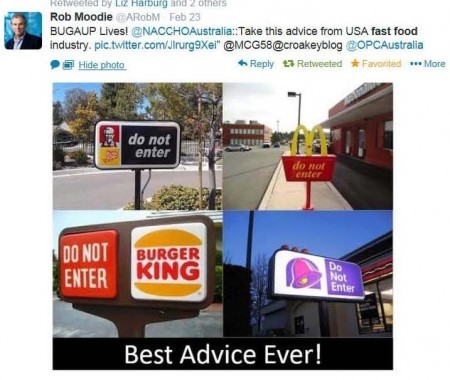 Says Colin: “As a result of this campaign we now have an international network of health and media professionals using social media and sharing humour to deliver serious messages.” 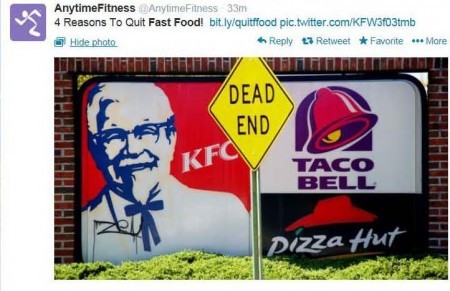 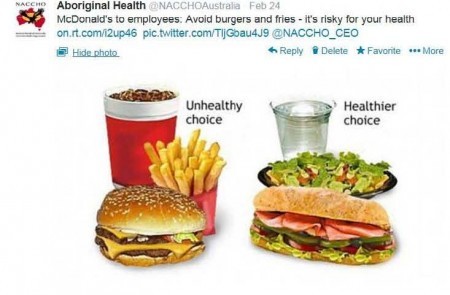