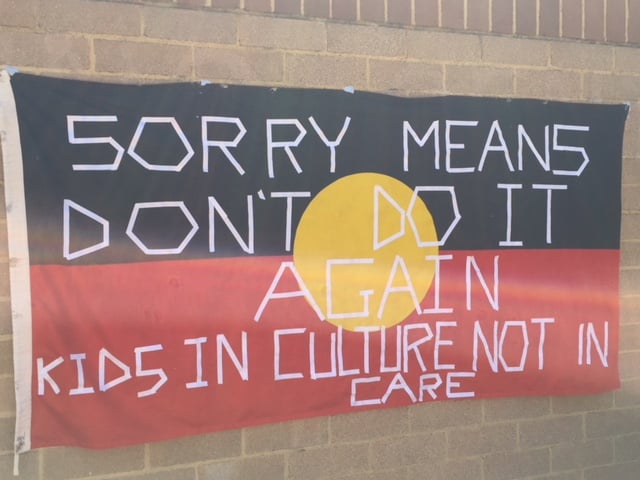 Trish Levett, a Gundungurra Elder, displayed this banner during an event at the Aboriginal Cultural & Community Centre at Mittagong, NSW, on Saturday 10 February to commemorate the 10th Anniversary of PM Kevin Rudd's apology to the Stolen Generations. The event was held with the support of the Healing Foundation. Photograph by Melissa Sweet.

Communities across Australia, from Kununurra to Mildura, Casuarina to Logan, the Mornington Peninsula to Cherbourg and Muswellbrook to Adelaide, will come together this month to commemorate tomorrow’s 10th anniversary of the National Apology to the Stolen Generations on 13 February 2008. See this list of events.

In this anniversary article for Croakey, The Healing Foundation CEO Richard Weston says Australia must understand that the impacts of the Stolen Generations policies, and other brutal acts of colonisation, are not consigned to the past, but “very much part of the here and now”. He says we need a serious commitment to tackle unresolved and intergenerational trauma in Aboriginal and Torres Strait Islander communities.

The Healing Foundation was formed, following feedback from the community, to mark the first anniversary of the National Apology. Since then it has been working with communities to address the impact of ongoing trauma for the Stolen Generations and other Aboriginal and Torres Strait Islander people.

Weston, a Meriam man who was born on Gadigal country and grew up on Noongar Boodja and is now on Ngunnawal Country, is this week’s host on the @IndigenousX Twitter account and is tweeting with the #Apology10 hashtag. 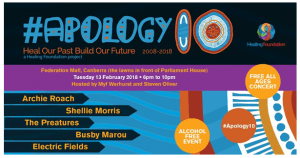 The Healing Foundation has produced a Community Service Announcement (CSA) about the 10th anniversary of the Apology, for television and radio stations around the country to play throughout the month of February, which features Aboriginal and Torres Strait Islander and non-Indigenous young people talking about the Apology and their hopes and dreams for the future.

Labor today announced it will: 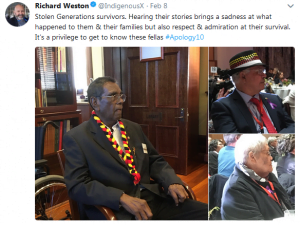 Anniversaries are a good time for reflection and as we commemorate the 10th anniversary of the National Apology tomorrow, I hope we can use the momentum to achieve something we’ve never managed to realise before—a serious commitment to tackle unresolved and Intergenerational Trauma in Aboriginal and Torres Strait Islander communities.

Ten years on from the Apology, and 20 years on from the tabling of the Bringing Them Home report that recommended that apology in the first place, there are still thousands of our people held back by the impact of trauma. Almost every Aboriginal and Torres Strait Islander family is affected in some way.

To give you an idea of what I mean, more than 12 per cent of the people who gave evidence of abuse to the recent Royal Commission into Institutional Responses to Sexual Abuse were Aboriginal or Torres Strait Islander. But we’re not just talking about events of the past. A study in Western Australia found that one in five Aboriginal children were living in families now, where between seven to 14 major life stress events had occurred in 12 months.

Most Australians prefer to think about the Stolen Generations—and other brutal episodes in 230 years of colonisation—as a phenomenon of the past. But the impacts are very much part of the here and now.

Trauma affects the way people think and act and overwhelms their ability to cope and engage. If people don’t have the opportunity to heal from trauma, it’s likely that their experiences and negative behaviours will start to impact on others, particularly children who are susceptible to significant developmental damage when they experience trauma at a young age.

This has created a cycle of trauma, where the impact is passed from one generation to the next, creating a snowball effect of cumulative damage. Research backs this up. The Stolen Generations and their children and grandchildren are twice as likely to be arrested by police and a third less likely to be in good health, compared to other Aboriginal and Torres Strait Islander people who are already at a disadvantage.  The fact is that most of the social and health problems we see in communities today, from family violence and suicide to high rates of incarceration and child protection, can be linked to Intergenerational Trauma.

So if we want to create a different future and close the gaps that still exist between Aboriginal and Torres Strait Islander people and other Australians, we need to stop putting Intergenerational Trauma in the too-hard basket.

The National Apology to the Stolen Generations in 2008 was a landmark event. It was a moment of truth telling which is critical when you’re trying to heal from trauma. But it was a starting point not a solution. The latest progress report on Closing the Gap shows that efforts to address appalling levels of disadvantage have made marginal improvements, in spite of billions of dollars in government funding.

Closing the Gap is complicated, but it’s not impossible. We just need to invest in strategies that have been proven to work and be prepared to invest beyond political cycles and social fads. We also need to listen to what Aboriginal and Torres Strait Islander communities tell us will work.

The Healing Foundation is finalising the first full analysis of current needs for the Stolen Generations, particularly as they enter the aged care sector, and to address issues like national reparations. When we talk to members of the Stolen Generations, they tell us over and over again that re-building families through culture and healing is a key priority.

Why? Because a traumatised person can’t benefit from programs around education and training.  Healing strategies must be implemented alongside enablers like employment, education and economic empowerment, otherwise we will keep wasting taxpayer dollars focusing on symptoms alone.

The Healing Foundation has shown that investment in the right programs will create long term change and reduce the burden on public funds.  Over the last eight years we’ve seen reductions in violence, juvenile justice rates and out-of-home care for children where healing programs have been implemented.  For example, our men’s healing programs have led to a 50% reduction in contact with Corrective Services and a drop in family violence, while programs for young people have potentially reduced contact with the protection system by 18.5% and the juvenile justice system by nearly 14%.

To replicate these successes across Australia, we need to scale-up our healing efforts and focus on families and communities, rather than individuals.

Tomorrow will be a day of celebration to mark a major step forward in the process of healing and reconciliation.  But it’s also a day when we need to take stock of what’s working and what’s not. Over the past few weeks I’ve been reminded by young people in our communities that the future holds a great deal of hope. Despite the wrongs of the past, many of them are optimistic and motivated to create change. This gives me hope that we will have something more positive to report after the next decade—and a different future, built on a foundation of healing.

From the #Apology10 breakfast 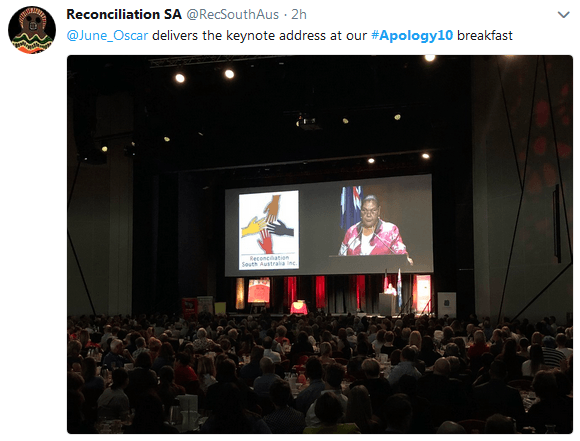 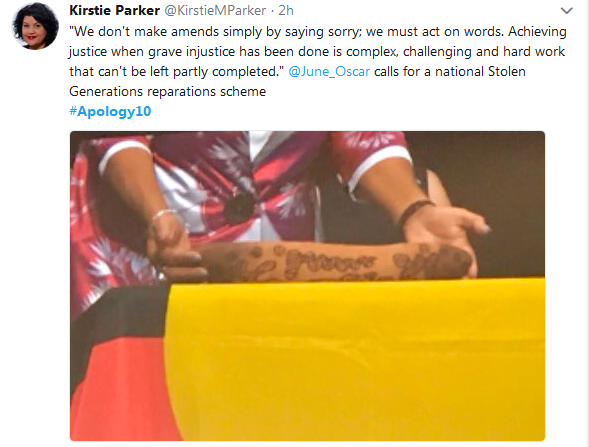 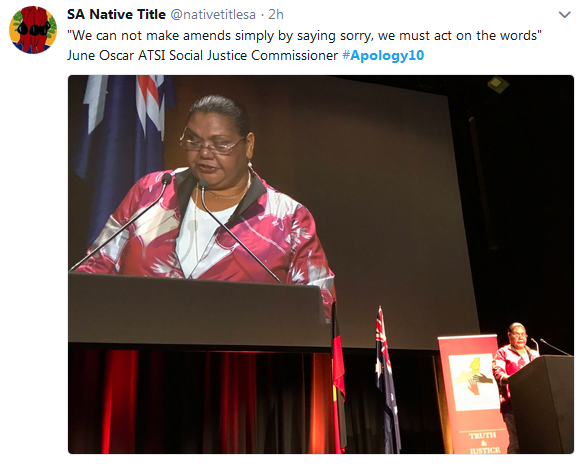 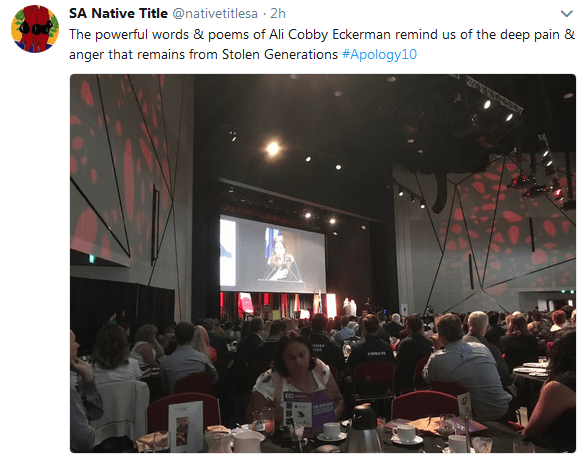 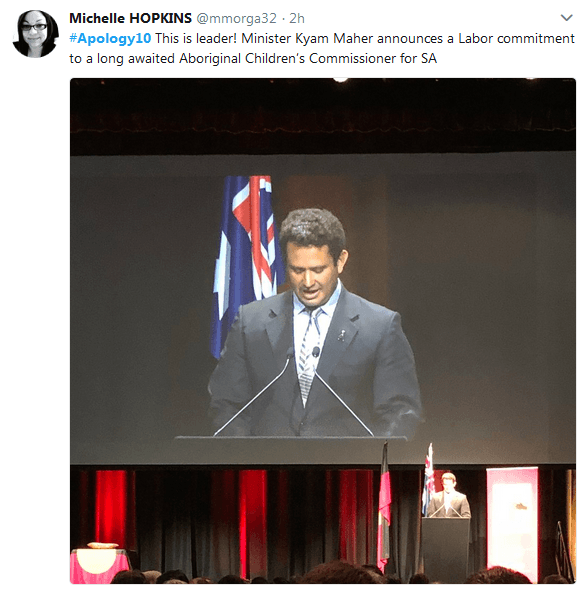