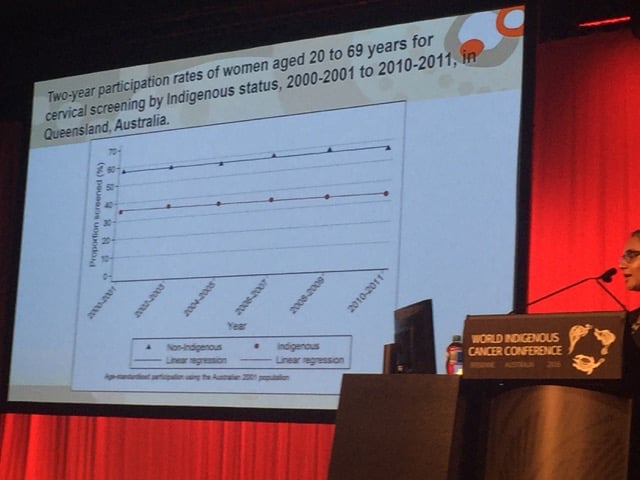 How will the new cervical cancer screening program, to be rolled out across Australia from May 2017, address historic failures to engage with Indigenous women?

It’s a big question following the release this week of a landmark study showing two-thirds of Indigenous women have not had a Pap smear, and that Indigenous women’s screening rates in Queensland have not improved in the 25 years of the National Cervical Screening Program (NCSP).

The signs are not promising. Formal consultations are due to begin with Indigenous health services in June – less than a year before the new national screening regime begins, and five years since the changes to the program were first mooted.

The Menzies School of Health Research released the research findings at the World Indigenous Cancer Conference in Brisbane on Tuesday, saying the NCSP has been “failing” Indigenous women, who are twice as likely to develop cervical cancer and four times more likely to die from it than other Australian women.

While researchers have long suspected poor screening rates for Indigenous women – sadly because the mortality rates are so high – they haven’t had concrete evidence because pathology report forms, the main data source for the Pap smear register, do not identify if women are Indigenous.

To fill that gap, the Menzies project, led by researcher Lisa Whop, conducted a retrospective cohort study of population-based linked health records for 1.3 million female Queensland residents aged 20–69 years who had one or more Pap smears during 2000–2011. From linked hospital records, 26,800 were identified as Indigenous women.

The study confirmed the fears: that two-thirds of Indigenous women don’t screen, and there had been no improvement in screening rates for Indigenous women in Queensland in the 25 years of the NCSP.

The findings were published this week in the international journal, Cancer.

A parallel study by Whop and colleagues was also published this week in the journal PLOS ONE, and reported that Indigenous women in Queensland are experiencing markedly higher rates of cervical abnormalities than non-Indigenous women. The study found that they are more than twice as likely to have a high grade abnormality as a non-Indigenous woman when they do present for cervical screening.

The study in Cancer found that screening rates were particularly low for Indigenous women aged 45-49, the age range where cervical cancer is most likely to be diagnosed.

Cervical cancer is largely preventable through screening with Pap tests, available to all Australian women aged 20 to 69 years through the NCSP. Whop told the conference that since the NCSP began, cervical cancer incidence and deaths have fallen by over 50 per cent and Australian rates are now among the lowest in the world.

But she said Indigenous women have not shared in those successes.

“Cervical cancer is a devastating disease for Indigenous women, their families and communities, made more so by how preventable it is,” she said.

For Whop, the big lesson of the study was: “you can’t improve what you can’t see”, but she said the true success of the research was “what happens next”.

The renewed NCSP, which from 1 May 2017 will replace Pap testing every 2 years with a test for HPV every 5 years, is an important opportunity for the program to engage more effectively with Indigenous women, she said.

So it was timely on Wednesday to have key figures involved in the new NCSP hosting an early morning symposium at the conference on the changes, asking “what are the key issues for Indigenous women in the transition of the program to the primary HPV screening?”

Karen Canfell, Director of the Cancer Research Division at Cancer Council NSW, said many non-Indigenous women also did not have Pap tests, but that there were also specific issues facing Indigenous women.

These included: fear of cancer and the belief that it is a terminal illness; fatalism and the belief that nothing can be done; stigma around sexual activity, fear to leave family to travel for healthcare, personal and community stories about negative experiences with the health system, and the costs and travel involved in accessing health services.

Describing Whop’s work as “seminal”, Ian Hammond, chair of the Steering Committee for the Renewal Implementation Program, assured delegates that legislation was being progressed to allow pathology forms to record Indigenous status and send the data to the national register.

“This is all happening as we speak,” he said.

But there was no news of a formal engagement strategy with Indigenous services or communities to drive the new NCSP, nor even whether there has been discussion over whether the chosen way of inviting Australian women to participate in the new screening tests – a letter sent on their 25th birthday – will work any better for Indigenous women than routine letters have in the past.

In fact, some delegates were surprised to find they were the starting point for consultations.

Hammond and Canfell conducted a “brainstorming” session at the symposium, saying the “output of today’s discussion will very much directly inform the development of materials and health promotion strategies for Indigenous Australians.” The Commonwealth was “very keen to get this right”, they said.

However, one table expressed concerns with the process, saying they had no Aboriginal and Torres Strait Islander women at their table and felt “uncomfortable making suggestions on their behalf”. They wanted to be reassured there would be direct consultations with the Indigenous community.

Yes, they were told, “this is the very beginning of the process”, and the Steering Committee would be working with Menzies to set up a consultation roundtable for Indigenous groups in June.

“That will be the next step (and) part of that discussion will be what further consultations are needed,” Canfell said.

Speaking later to Croakey, Hammond said it was “not reasonable” to say the NCSP had failed Indigenous women, who he said were recognised broadly as a “hard to get at” population.

He also rejected the suggestion that the Steering Committee was starting Indigenous consultation too late. “You have to get everything into place before you can communicate the messages,” he said. “There’s no good, for example, going out there and saying we’ll offer you ‘self-testing’ if self-testing is not approved (yet).”

At least there is agreement that some Indigenous primary care services have shown the way, achieving better screening participation than the national rate.

“The national program needs to understand and build upon what these services are doing so successfully. The need to engage with Indigenous women and Indigenous communities will be critical to the success of the Renewal for Indigenous women. ”