Home Healthcare and health reform disabilities NDIS needs to be at top of #AusVotes agenda, fully spending, and headed by people with disability 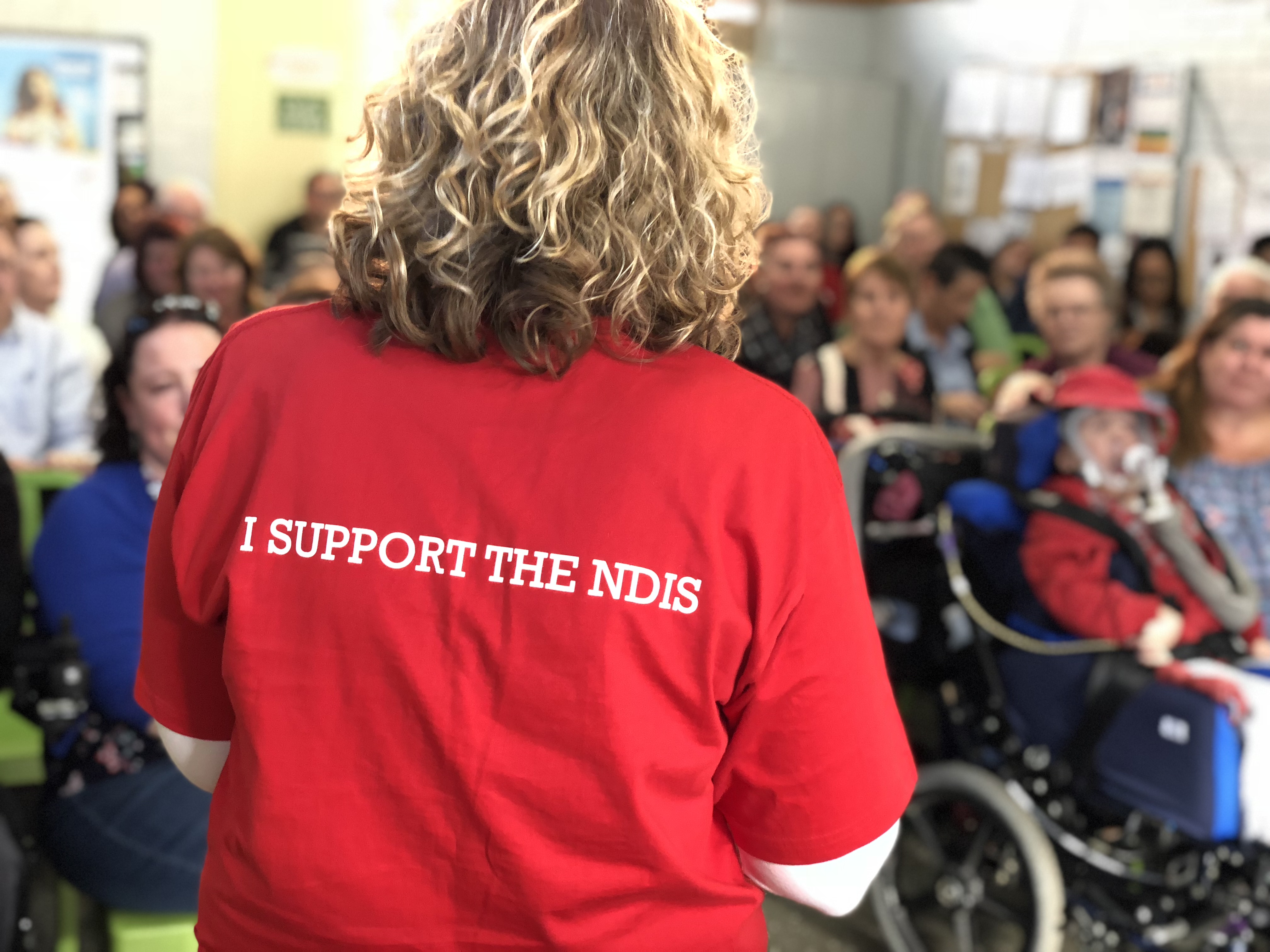 Photo from an Every Australian Counts forum

NDIS needs to be at top of #AusVotes agenda, fully spending, and headed by people with disability

Introduction by Croakey: This Friday, 3 May, the grassroots Every Australian Counts campaign that fought for the introduction of the National Disability Insurance Scheme (NDIS) is leading a national day of action to make sure the NDIS is at the top of the agenda in the federal election.

As Every Australian Counts Campaign Director Kirsten Deane outlines in the post below, deep concerns about the way the NDIS is working and has been rolled out across Australia were heightened last month when the Budget revealed an NDIS underspend of $1.6 billion in 2019-20.

Disability advocates are calling on the Federal Government to use those excess funds to fix the NDIS’s implementation problems, not just put them back into general revenue, saying the underspend is not because people don’t need help, but because they can’t work their way through the system to get it.

On Tuesday came more news from the NDIS, with the unexpected resignation after less two years in the job of Rob de Luca, head of the National Disability Insurance Agency (NDIA), which runs the NDIS. The NDIA board announced that de Luca, a former banker appointed by the Coalition Government, is moving to head up for-profit Zenitas Healthcare, an NDIS provider.

Disability groups and advocates say the next Federal Government must this time, finally, appoint a person with disability to head the agency that is so crucial to the lives of so many Australians with disability but is struggling on many fronts.

“This is our Scheme, we need it to be governed and led by people with disability,” said Matthew Bowden, co-chair of People with Disability Australia (PWDA).

Bowden told the ABC that de Luca’s resignation offered the next Federal Government “the opportunity to reset the culture of the agency” which had been too focused on cost cutting versus assisting those who was set up to support.

Hear his interview on Radio National breakfast here, in which he calls not just for people with disability at the helm of the NDIS but also in the majority of staff positions.

Let me tell you about Sam (not his real name), a young man in his 30s who lives and works in regional Victoria. Sam has a disability as a result of a genetic condition, lives with his family and, until recently, had a job he really enjoyed.

That was until the National Disability Insurance Scheme pulled the rug out from underneath him.

Sam needs a new wheelchair and has been waiting more than two years for it to arrive. Last year he ended up in hospital as a result of sitting in a chair so unsuitable it gave him pressure sores.

The problem is more than money. The first year Sam was an NDIS participant he received quite good funding. Unfortunately those funds came without the help or support needed to organise home modifications and purchase new equipment.

That meant Sam and his family had to navigate the NDIS on their own. Two years they are still being asked to count how many nails will be required to modify the family home, and they are still waiting for a wheelchair.

The worst part is that Sam is not alone.

Every Australian Counts is the grassroots campaign that fought for the introduction of the NDIS. It is made up of tens of thousands of ordinary Australians who came together in an extraordinary way to convince the Australian public that the nation desperately needed a better way to support people with disability. And that the NDIS was the answer.

Yet despite all the highs of winning the scheme and the bright future it promised, we find ourselves here six year later, still fighting for the NDIS. Instead of celebrating our new found choice and control, and getting on with our lives, we are still holding community forums all across Australia bringing together people with disability, their families, carers and service providers to talk through the problems with the scheme and what needs to be done to get it back on track.

Along the way we have met countless people like Sam. A woman with physical disability waiting three years for home modifications. Young children waiting six, nine, twelve months for vital early intervention. People and families with lives on hold waiting endlessly for the outcome of reviews.

And these are just the people who come along to our forums – to say nothing of the many out there who never find their way to our door.

But we have also met many people who have some great stories to tell. One of my favourite stories is a man called Peter, who has gone on to become an Every Australian Counts champion.

Before the NDIS, all Peter needed was a couple of hours personal care a week and a wheelchair, but he never received it. Instead, he languished on Queensland’s disability waiting list for 25 years – and a local charity had to run a fundraiser to buy his last wheelchair.

The NDIS changed all that. Peter now has a new chair, the personal care he needs and a job. Best of all he has in his words “a wife who has just gone back to being his wife”.

At every forum, we are told about how the system is too complex, too bureaucratic and over-engineered. There are fifty steps to do something when there could be five, meaning everything takes too long and there are myriad ways for it all to go pear shaped.

Participants, families, and their carers share stories of how processes break down quickly and easily, resulting in gaps between NDIS plans, late payments and lengthy waiting times for assistive technology – all of which leave them without support. We also hear stories about funds being cut just when people were starting to really get going.

For people who are well educated, resourced and connected the scheme is incredibly difficult to navigate. For anyone who comes from any other background – culturally or linguistically diverse, Aboriginal or Torres Strait Islander – the challenges are even greater.

As a result, the NDIS is in danger of becoming a two-tier system that delivers better outcomes for people who are resourced or have advocates and leaves behind the most disadvantaged.

There are other problems. The scheme is also not integrating with the health, aged care and  justice systems. Consequently, people are missing out on vital supports while governments haggle over who is responsible for what and who pays for what.

“Underspent every year of its life”

Meanwhile the agency charged with the responsibility of running this incredible social and economic reform is hampered by a lack of resources, including a cap on the number of staff it can employ. The churn of staff, including the departure this week of the CEO after less than two years in the job, is one indicator of the kind of pressure they are under.

This is not the scheme we fought for and believed in.

There are many issues but one thing that ties them together is – funding. The NDIS has been underspent every year since it began. This is because people are coming into the scheme more slowly than expected and participants are not spending all the funds they have been allocated.

There is an NDIS underspend not because people don’t need help, but because they can’t work their way through the system to get it. To any reasonable observer, the underspent money should be reinvested back into the scheme to fix these issues and give people what they deserve. Yet for the last six years it has very quietly disappeared back into government coffers.

“Get the NDIS back on track”

That’s why this election we are calling on all parties to commit to the urgent action needed to get the scheme back on track.

We know what we need. Quicker, simpler and easier processes. Simple and plain communication. More help for people, families and carers at every stage of the NDIS process. And some real focused and resourced attention on groups who need more support – such as those with complex needs, or from an Aboriginal or Torres Strait Islander background, or from a culturally or linguistically diverse background.

We want more staff to clear backlogs and we want those staff to be competent and well-trained with the right experience and expertise. Combine that with a fully functioning and fit for purpose IT system and some immediate action on the way NDIS works with other systems like health, justice, and transport and we will start seeing the kind of change we want to see.

The NDIS still has the potential to be the incredible reform that tens of thousands of dedicated and passionate Australians fought for. It’s not working now, but it doesn’t have to stay that way. Not for Sam, not for the families who come along to our forums, and not for the thousands of people who rely on the scheme.

Our leaders have the chance to take this opportunity, run with it, and commit to delivering what was promised. But with just over two weeks until polling day their time is running out.

Kirsten Deane is the Campaign Director for Every Australian Counts, the grassroots campaign for the NDIS. She is also the mother of a cheeky teenager who is now an NDIS participant.