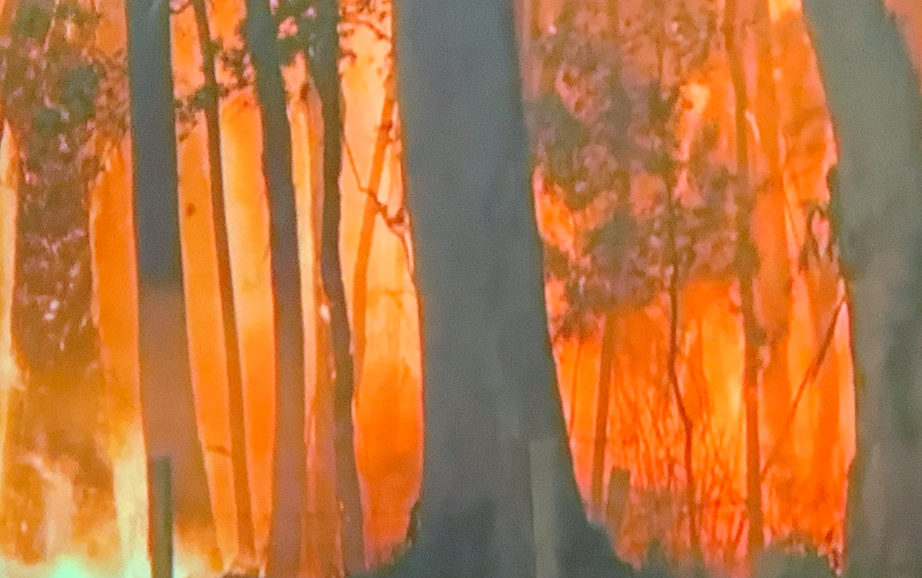 Nearly 80 percent of Australians affected in some way by the bushfires, new survey shows

Introduction by Croakey: Political strategists are bound to be interrogating the findings of a new Australian National University study, Exposure and the impact on attitudes of the 2019-20 Australian Bushfires, showing that public support for the Federal Government and new coal mines has fallen, while concern about environmental issues and climate change has increased.

The study, involving a representative sample of 3,249 adults and conducted over two weeks from 20 Janaury, also found declining levels of satisfaction in where the country is headed.

Only 48.8 percent of respondents had confidence in the public service (compared with 52.1 percent in October 2019), although 93 percent reported confidence in organisations responsible for firefighting in regional or rural areas.

Maybe we will see more firefighters recruited to run for election.

The findings – which will also be available for further analysis through the Australian Data Archive – are likely be of interest and use to health advocates, researchers and planners, as they demonstrate the widespread and wide-ranging impacts of the bushfire season.

The researchers estimate that the vast majority of Australians (78.6 percent) were impacted in one way or another, either directly, through their family/friends, or through the physical effects of smoke, and that around 2.9 million adult Australians had property damaged or threatened, or had to be evacuated.

Below the authors give an overview of their findings in an article first published at The Conversation.

Last month, the Australian National University contracted with the Social Research Centre (SRC) to survey more than 3,000 Australian adults about their experiences and attitudes related to the bushfires.

The study is the first of its kind to gauge how people were affected by the crisis and how it changed their views on a range of subjects, from climate change to the government response.

More than half of Australians felt anxiety

Our research shows the vast majority of Australians were touched in some way by the fires. We asked about eight different forms of impact, from lost property to disrupted holiday plans to difficulty breathing from the smoke.

About 14.4% of our respondents experienced direct exposure to the fires, either through their property damage or evacuations.

We can extrapolate further by looking at population estimates from the ABS and the number of visitors to areas impacted by the bushfires from the National Visitors Survey to estimate the total number of people directly affected at around 3 million.

And 77.8% of our respondents reported indirect exposure to the fires, such as having a friend or family member with damaged or threatened property, having travel or holiday plans disrupted, being exposed to the physical effects of smoke or feeling anxious or worried about the fires.

Breaking the data down by individual category, the severity of the public health challenges becomes more clear.

Nearly six in 10 respondents (57%) said they were physically affected by the smoke, while 53.6% said they felt anxious or worried about the fires.

Confidence in the government declined

The long-running Australian Election Study has shown that confidence in the federal government has declined substantially in the past few decades.

Crises have the potential to restore some of this trust if dealt with effectively and transparently. However, the government’s handling of the recent bushfire crisis seems to have had the opposite effect.

Confidence in other institutions, meanwhile, was quite stable over the four-month period, and higher than for the federal government. Rural fire-fighting services had the highest level of public trust in our survey at 92.5%. 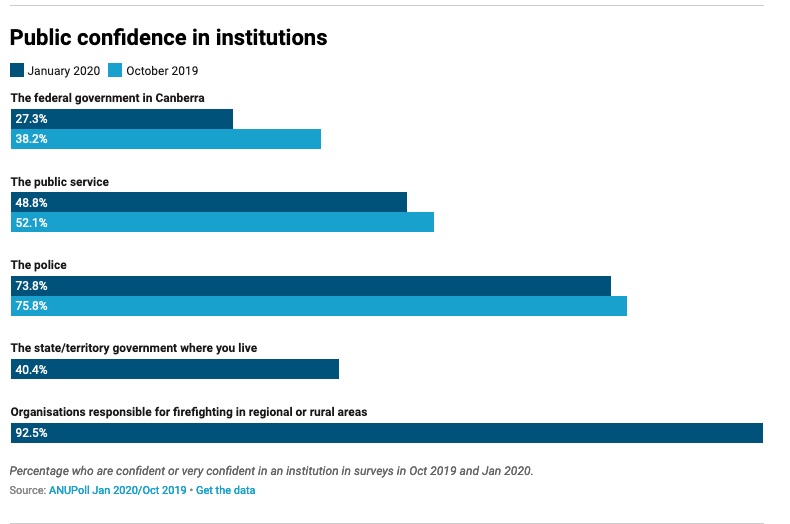 We also tracked significant changes in people’s attitudes towards the environment.

For instance, 49.7% of people reported the environment as one of the top two issues facing Australia in January 2020, compared to 41.5% of respondents in October 2019.

Another interesting finding: 10.2% reported fires, natural disasters or extreme weather as the most or second-most important issue facing Australians, up from nearly nonexistent in October 2019.

Read more: After the fires, a reason for optimism: our civic engagement has never been higher

Our findings showed consistently higher concern among Australians when it comes to specific environmental issues. Comparing responses from our January 2020 survey and a 2008 ANUpoll, we saw two large increases in concern for loss of native vegetation, animal species or biodiversity (13 percentage points) and drought and drying (nine percentage points). 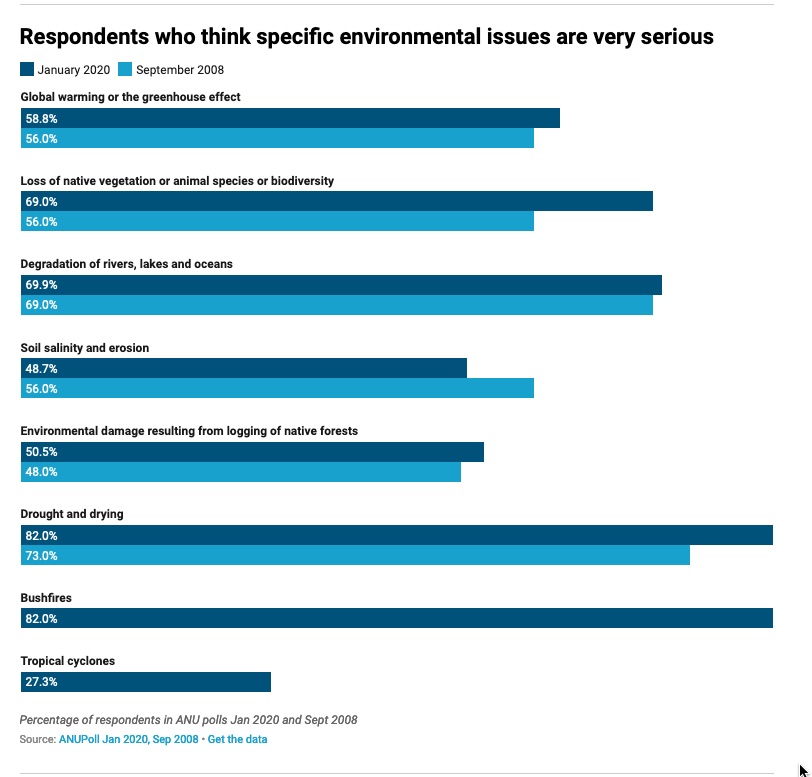 There was an even larger increase in the proportion of people who believe global warming or climate change will impact their lives.

Nearly three-quarters (72.3%) of respondents said global warming was a very serious or fairly serious threat, a substantial increase from the 56% who said so in 2008. 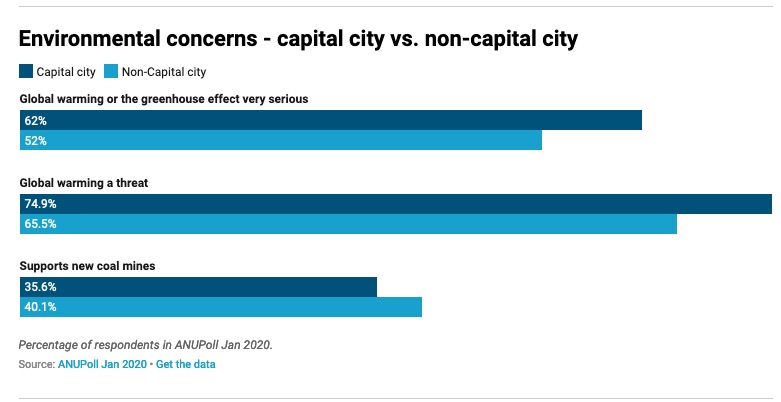 Support for new coal mines has also declined sharply over the past eight months. In our January survey, 37% of respondents said the government should allow the opening of new coal mines, down from 45.3% in an ANU survey from June 2019.

While being exposed to the bushfires appears to have made people more aware of environmental issues, the drop in support for new coal mines does not appear to have been driven by the crisis itself. Rather, it appears to be consistent across the population, with the biggest decline occurring among those who voted for the Coalition in the 2019 federal election (57.5% supported new mines in January 2020, down from 71.8% in June 2019).

There is still much work to be done to fully understand people’s attitudes towards climate change and how this correlates with natural disasters like bushfires.

But the data in our survey provide opportunities for future research and new insights and will be made available through the Australian Data Archive. Future surveys could test for changes in people’s attitudes taking into account different variables and track how those attitudes change over time.