A third of all Australian prisoners were homeless before their incarceration and 40 percent have a diagnosed mental health condition, with one in three suffering a chronic illness and data showing they are two to four times less likely than the broader population to have seen a GP in the past year.

These were some of the findings presented in a new report, The Health of Australia’s Prisoners 2018, which was published Thursday by the Australian Institute of Health and Welfare (AIHW).

Many adults entering prison came from disadvantaged backgrounds, with just over half of those surveyed reporting that they were unemployed and 1 in 3 homeless in the 30 days prior to being incarcerated.

Education levels were also very low, with one-third of prison entrants having completed Year 9 or under at school; by comparison, only 6.5% of Australian adults fail to complete Year 10.

We also found prison experiences that cross generations. Almost 1 in 5 (18%) prison entrants had at least 1 parent or carer who had been prison during their childhood and 2 in 5 had children dependent on them.”

According to the report, people entering prison, generally:

The report said people in prison had “significant and complex health needs, which are often long-term or chronic in nature”:

Improving the health and well-being of people in prison, and maintaining those improvements after prison, benefits the entire community. 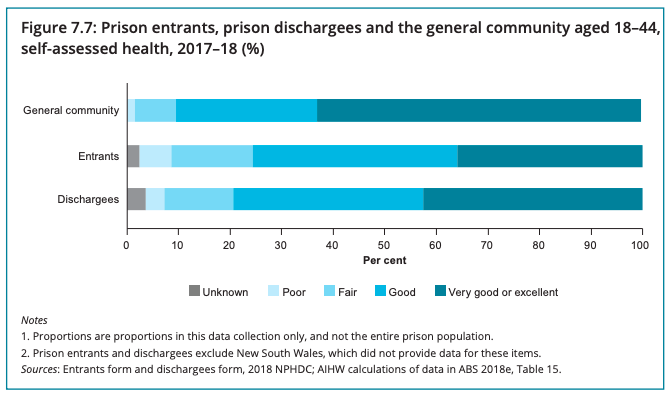 Waitlists (30%), priority (29%) and expense (14%) were the main reasons given by prisoners for not seeing a doctor when needed in the community. Once in jail, priority (63%) was the main issue, followed by expense (38%), being affected by drugs/alcohol (38%), or transport/other access barriers (28%) for not seeking treatment.

The report said of 115 deaths reported in custody between 2013-14 to 2014-15, one quarter were the result of self harm or suicide, with the remainder from natural causes. The average age at death was 54.8 years.

The data comes from surveys of some 1,100 prisoners (803 entering detention and 335 due for release in the following month) at 62 facilities across Australia, excluding NSW.

When leaving prison, the report found inmates were at a sixfold increased risk of suicide compared to the broader population, and more than half (54%) expected to be homeless at their release.

However, most also reported that their health either stabilised (32%) or improved (54%) while in prison. Indigenous prisoners were more likely than their counterparts to say their health had improved significantly while incarcerated (35% vs 28%). 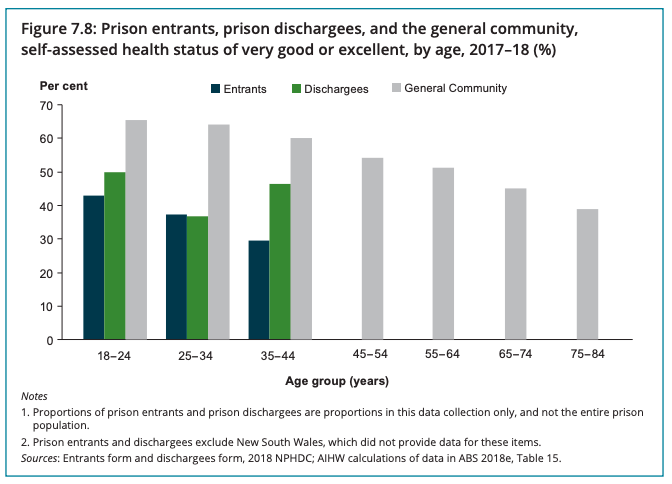 Whilst in prison, detainees were more likely to seek treatment — particularly for alcohol and other drug problems — than in the community (see below).

One quarter of prisoners said they received a new diagnosis while in prison, most commonly cardiovascular disease (39% of all diagnoses were given for the first time in prison), musculoskeletal conditions (30%), diabetes (28%) and communicable diseases (26%).

For some people from disadvantaged backgrounds, prison can provide better access to health care and health professionals than they experienced in the community.

Prison clinics can greatly help people in prison take steps to improve their health, such as quitting smoking or getting help with mental health issues.

However, these health improvements can be lost after people are released, especially if health care and support services are not available during their transition to and within the community.” 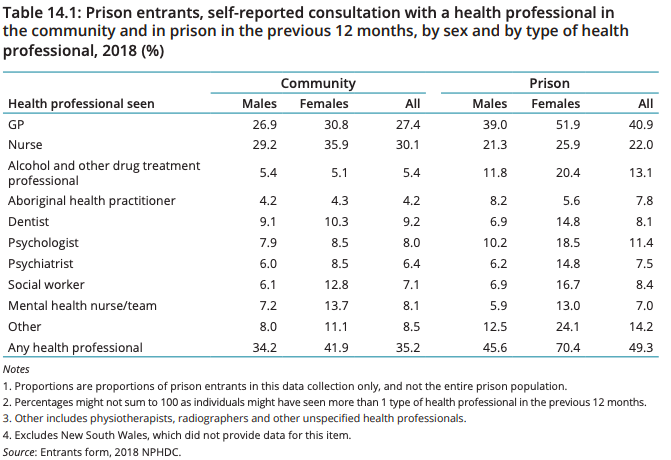