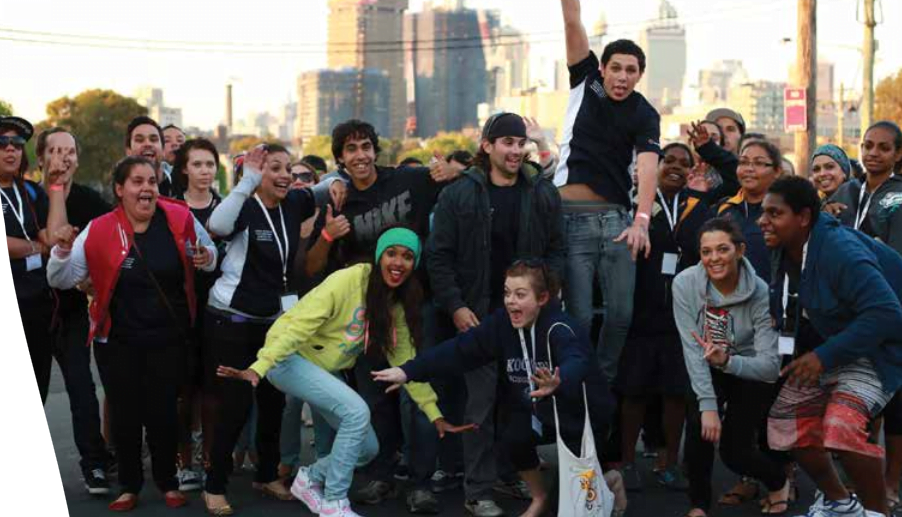 The health and wellbeing of Aboriginal and Torres Strait Islander adolescents is lagging behind that of their non-Indigenous peers because their needs differ substantially and are often not identified in policy approaches or met by health and social services.

The study – Health and wellbeing of Indigenous adolescents in Australia: a systematic synthesis of population data – points to a “huge opportunity”, not only to improve individual and community wellbeing but to help address health inequities.

The authors say it is the first such profile of Indigenous adolescent health in any country and identifies health needs that have not previously captured attention from researchers or policy approaches. The study has a strong focus on the impact of the social disadvantage.

“There has been a lot of good work in addressing specific areas of Indigenous adolescent health – but this is the first study to take a step back and consider what are the most pressing needs for Indigenous adolescents in Australia to ensure their health and wellbeing,” lead author Dr Peter Azzopardi said.

“This study identified many areas where investments will not only bring improved outcomes for Indigenous adolescents, but also the broader Indigenous population.”

The study was published recently in The Lancet and launched by lead author Dr Peter Azzopardi, a paediatrician and researcher based at the Burnett Institute, and Professor Alex Brown, head of SAHMRI’s Aboriginal Research Unit at the 6th National Health and Medical Research Council research translation symposium, co-hosted with the Lowitja Institute.

It’s particularly timely, coming as the Council of Australian Governments (COAG) works to “refresh” Close the Gap targets and with the recent release of the findings of the Royal Commission into the Protection and Detention of Children in the Northern Territory.

The authors warn that Australia will not address Indigenous health inequalities without a specific focus on adolescents, who make up one-third of the Aboriginal and Torres Strait Islander population.

They also warn about the health impacts of systemic racism and discrimination, including where that leads to high arrest and incarceration rates.

“Incarceration of young people at this key development stage will have devastating immediate, lifelong and intergenerational consequences; there is a need to invest in alternatives,” they said.

Some of the main findings include:

It found that high rates of vaccine preventable disease and a large burden of potentially preventable mortality “suggest that the current health system is poorly responsive” to their needs and that socio-cultural factors play a huge role.

For example, it said, pneumonia was an important contributor to morbidity, which might in part arise from high incidence of influenza, yet Australia’s vaccine schedule does not currently identify Indigenous people aged 5-15 as a high-risk group.

High rates of sexually transmitted infections, including in the 10-14 year age group, that the report said should be interpreted in the context of early sexual debut and endemic infection in the broader community, were also a concern.

These findings, coupled with high rates of adolescent pregnancy and obstetric complications, highlighted the need to redouble efforts around sexual and reproductive health, the authors said

The study tells the story behind the statistics, finding that widespread disadvantage across social and cultural determinants underpins the complex needs identified.

“Experience of racism was common. Many lived in over-crowded homes of insecure tenure and with substandard facilities. Almost 30 per cent reported economic stress and food insecurity. One in five reported having been arrested in the preceding five years, one in ten males aged 20- 24 incarcerated.”

Azzopardi, who has worked as an adolescent physician in Aboriginal communities and undertook the study as part of his PhD, said he believes the big focus on the social and cultural determinants of health “is a particular strength of this study”.

This was driven, he said, by a national advisory group of six Indigenous young people, three Indigenous adult community members, three researchers, three policy makers and two service providers who “really pushed for us to look at that in detail”.

The advisory group provided input about the reporting framework, interpretation of findings and policy recommendations.

“Other studies which describe population health needs tend to look at disease, injury, and some risk factors but fall short of looking at some of the determinants so it’s really difficult to place those findings in context or really to frame up appropriate responses,” Azzopardi said.

“The advisory group brought a completely new level of inquiry, it really changed the scope of the project,” he said.

The authors say that the absence to date of a comprehensive national health profile like this for Indigenous adolescents has been “a barrier to effective policy” with the focus on adolescents “largely on the margins of Indigenous health policy”.

“Adequate responses will require intersectoral actions, including a health system responsive to the needs of Indigenous adolescents.”

Below is a range of recommendations from the authors on priority approaches:

Engage and empower youth and their communities

Young people are powerful agents of change and must be engaged in the design, implementation and evaluation of research, policy and programs related their health. Communities and families also play a key role in enabling and supporting adolescent health and wellbeing and they should also be respectfully engaged and consulted.

There is a need to take a much broader and integrated view of adolescent health which includes (but is not limited to): suicide and also non-fatal self-harm, unintentional injury and assault; adolescent sexual health and also reproductive health; mental health which addresses both immediate burden of mental disorder and also supports wellbeing; and key risks for future poor health which include overweight, nutrition, physical activity and substance use.

Ensure health care is accessible, and address health & wellbeing through other sectors

Health systems need to be adapted to respond to the needs of Indigenous adolescents, which considers culture, geography, family and community resources. However, many of the health needs of adolescents such as injury and violence are best addressed through sectors other than health. Inter-sectoral action must include the education sector given schools can be health promoting environments, and education is such as powerful determinant of health.

Ensure accountability of any investment

We need better systems for accountability including better coordination of data systems, greater engagement of Indigenous youth and their families and communities. While data around Indigenous adolescent health are improving, there is a need for further research, particularly to evaluate interventions. There is also a need for a set of indicators to monitor progress against any investments made. 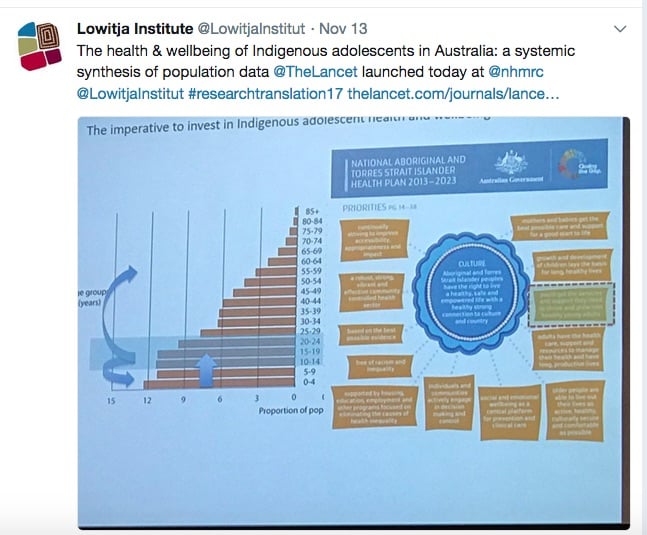 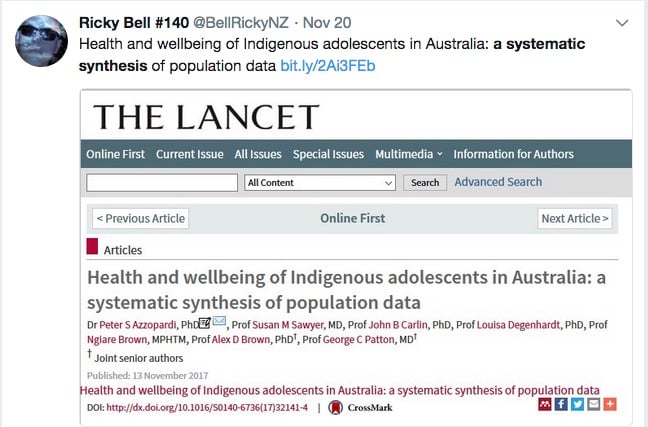