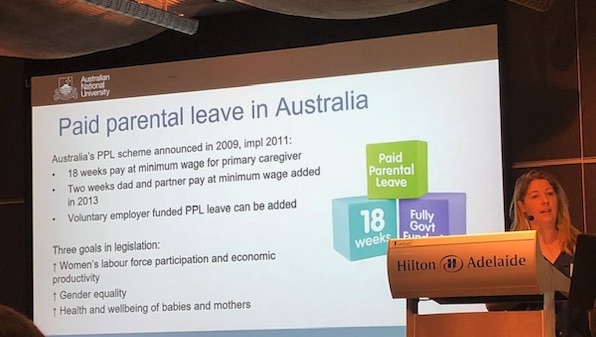 Dr Belinda Townsend presents to a recent symposium in Adelaide

Next steps to improve paid parental leave in Australia

Introduction by Croakey: In many ways, the history of paid parental leave in Australia is a story of inequity. Some people have better access than others, depending upon where they work and who they are.

And, as a whole, Australian families generally get a worse deal than those in comparable countries when it comes to paid parental leave.

Advocates seeking to develop a more equitable system can learn from what has worked in the past, suggests Dr Belinda Townsend, research fellow at the Australian National University Menzies Centre for Health Governance, School of Regulation and Global Governance.

She recently presented her findings to a Centre for Research Excellence in the Social Determinants of Health Equity policy symposium in Adelaide.

Ten years on from the historic announcement of Australia’s paid parental leave scheme, it is time for policymakers, experts, industry, and government to reflect on further improvements to support Australian families.

In 2009, after decades of policy advocacy, the Australian government announced its first national paid parental leave (PPL) scheme to provide 18 weeks’ pay at the minimum wage for eligible primary caregivers on the birth of a child.

The scheme, implemented in 2011, was widely praised for providing an important safety net for working families, for mothers to recover from childbirth and for parents to bond with their child.

A 2014 evaluation of the scheme demonstrated some improvement in these areas, including an increase in the rate of women returning to work following paid parental leave, and improvements in maternal health especially for women in low income employment.

Australia is falling behind

However, while Australia’s scheme has demonstrated benefits for employers and for families, Australia still lags behind other OECD countries, on a number of measures including duration of paid leave and who can access it.

Australia also falls significantly behind OECD countries on public expenditure on paid parental leave, at less than half the OECD average per live birth.

This gap can in part be explained through Australia’s hybrid system – we have a minimum government-funded scheme with the option for employers to offer additional employer-funded leave.

Ten years on, while some employers – in particular very large companies – have offered generous provisions for paid maternity leave on top of the government scheme, more than half of employers in Australia do not currently offer any employer-funded leave.

The outcome is that families in Australia have very different parental leave experiences and opportunities depending on the sector in which parents work.

There are also gender inequities in who can access paid leave in Australia. More than 95 percent of parents who take up the government-funded scheme are women who are often recovering from childbirth, breast and infant feeding, or who have made a financial decision based on available leave for both parents.

Fathers have less access to paid leave in Australia compared to other OECD countries, and while they may take unpaid leave or other forms of personal leave, financial and cultural barriers continue to constrain a greater uptake of parental leave by Australian men.

How did we get here? Lessons from agenda-setting

Our research, recently published in the journal Health Promotion International, investigated the agenda-setting processes that led to Australia’s first PPL scheme and the prioritisation of three policy goals for improved health, gender equality and workforce participation.

In order to navigate these barriers, advocates strategically used different framings to advance support for paid parental leave, including building up framings for economic productivity, the “business case” for employers, for improving gender equality, and for health and equity.

After years of employer resistance, another strategy was to shift tactics to focus on a government-funded scheme with a voluntary employer top up. The shift enabled greater support from industry actors, and was successfully introduced in 2011.

However, it is worth noting that more than half of employers have not introduced a top up, leading to widening inequities ten years on.

In terms of the frames used by advocates, we found that the health arguments varied in different institutional settings and, at times, advocates selectively argued the economic or gender equality framing over health.

This points to the use of multiple framings to draw support from “non-health” actors, a finding which could be used to drive greater attention to progressive policies that tackle the social determinants of health but which are in policy domains outside of the biomedical or public health sector.

Overall, Australia’s PPL scheme was an important social policy for health equity, but ten years on there are many improvements that should be made for greater gender and class equality that moves Australia closer to the OCED nations.

Lessons from agenda-setting suggest that public health actors can make greater use of multiple framings to engage allies and to advance policy attention to the social determinants of health.

• This article is an updated version of the original published in Policy Forum.

• Dr Belinda Townsend is a research fellow at the Australian National University Menzies Centre for Health Governance, School of Regulation and Global Governance. Her research uses political science to understand the political dimensions of health inequities. This project was funded by the NHMRC Centre for Research Excellence in the Social Determinants of Health Equity.