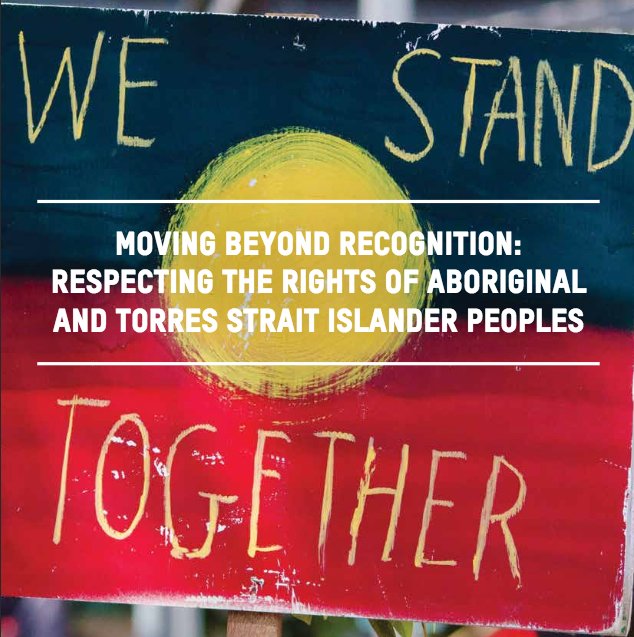 Nothing about us without us – resetting relations with Aboriginal Australia

Fraying relations between the Australian government and Aboriginal and Torres Strait Islander peoples have been thrust into the spotlight with two damning reports released this week exposing a failure to engage and empower Indigenous communities.

2017 is a year of watershed moments for Australia’s First Nations people, marking 50 years since the historic 1967 referendum, the 25th anniversary of the Mabo decision, and 10 years since Australia adopted the UN Declaration on the Rights of Indigenous Peoples.

Yet Aboriginal and Torres Strait Islander people remain woefully under-represented and left on the outer of decision-making directly affecting their communities, according to an Oxfam report calling for a reset of race relations in Australia. (We’ve got an excellent piece on self-determination here at Croakey this week which we’d encourage you to read)

The Oxfam report ‘Moving Beyond Recognition: Respecting the Rights of Aboriginal and Torres Strait Islander Peoples‘, offers a ten-point prescription to elevate the status of Australia’s Indigenous peoples: 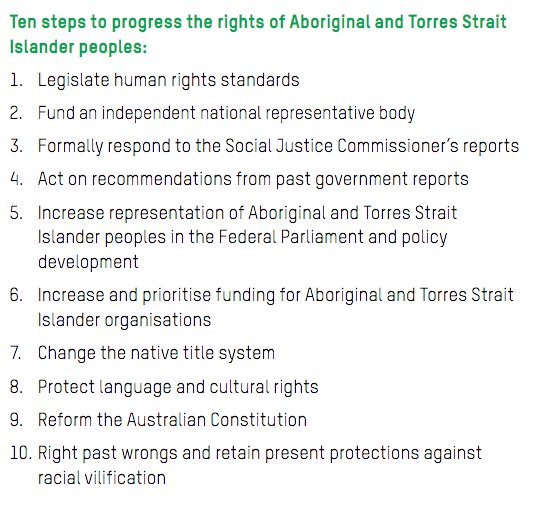 Urging the Federal Government to engage with the Redfern Statement, the Oxfam report says refusing to listen to or effectively include Indigenous communities in decision-making about their own lives has stymied any real progress, describing living conditions for some as “akin to those in developing countries”.

In monetary terms, Oxfam said little more than half of all funds allocated under the Indigenous Advancement Strategy (IAS) went to Indigenous organisations, with just 18.6% going to Indigenous-specific services. In fact, funding for such services fell by 1.2% in real terms between 2008-09 and 2012-13, while the government gutted essential frontline services for Indigenous communities to the tune of $1.2 million.

Other key points from the report:

I call on all Australian governments to implement these recommendations in full, with all possible urgency, so that all Australians can enjoy equality of opportunity and equal socioeconomic outcomes, and we can all reach our full potential. Partner with us and we will realise equality.

‘Powerlessness, loss of culture and lack of control’

The Oxfam report echoes a sobering account from the United Nations Special Rapporteur on the Rights of Indigenous Peoples, Victoria Tauli-Corpuz, on her recent mission to Australia.

Though “impressed and inspired by the strength of spirit and commitment of Aboriginal and Torres Strait Islanders to develop innovative measures to support their own communities”, Tauli-Corpuz detailed a “deeply disturbing” prevalence of racism — “ranging from public stereotyped portrayals of them as violent criminals, welfare profiteers and poor parents, (to) discrimination in the health sector and the administration of justice”.

Were the Federal Government to consult and work more closely with Indigenous community groups (instead of the “dismal disregard” which was the current status quo), Tauli-Corpuz said it could achieve significant progress, on fronts including public health, housing, education, child protection, conservation and justice.

“While Australia has adopted numerous policies aiming to address Aboriginal and Torres Strait socioeconomic disadvantage, the failure to incorporate self-determination and the right to participate in these is alarming,” she said.

“The compounded effect of these policies has contributed to the failure to deliver on the targets in the areas of health, education and employment in the Closing the Gap strategy and has contributed to aggravating the escalating incarceration and child removal rates of Aboriginal and Torres Strait Islanders.”

Tauli-Corpuz said the IAS had severely undermined capacity of Indigenous-led initiatives in health, housing and legal services and funding cuts appeared to have specifically targeted organisations working in advocacy to stifle freedom of expression, a development she described as “deeply troubling”.

Almost a decade after Closing the Gap targets were agreed by COAG, she said Australia was on track to meet just one of the seven (halving the gap in Year 12 attainment rates), with progress stagnating on life expectancy, infant mortality, education and employment.

In health, social and cultural determinants explained one-third of the gap and Tauli-Corpuz said understanding the impacts of intergenerational trauma and racism were essential:

She made special mention of the damaging 18c debate and said she hoped, with the defeat of the amendment in the Senate that “this marks the end of the matter.”

In order for NATSIHP to succeed, she said Indigenous leadership in health must also be valued and prioritised, pointing to the “remarkable success” of ACCHOs in providing culturally appropriate services.

She called for additional Closing the Gap targets to be set on imprisonment, child removal and violence against women in order for meaningful change to be achieved.

‘Simply astounding’ – the tsunami of incarceration

Incarceration was a principal focus of the UNSR’s visit, and she described imprisonment rates, particularly of women and children, as ‘simply astounding’.

By 2050, she said Aboriginal and Torres Strait Islanders were expected to comprise 50% of the prison population (currently 27% despite making up just 3% of the Australian population), with some describing the situation as a ‘tsunami’ of devastating consequences for affected individuals and communities.

While historical and socioeconomic drivers could not be ignored, Tauli-Corpuz said current laws and policies were contributing — sometimes with disproportionate impacts. Some examples she cited:

She said meeting children as young as 12, who had been locked up for non-violent offences, was the most disturbing element of her visit:

It is completely inappropriate to detain these children in punitive, rather than rehabilitative, conditions. They are essentially being punished for being poor and in most cases, prison will only aggravate the cycle of violence, poverty and crime.

Supporting the #JustJustice campaign, Tauli-Corpuz said the focus needed to shift from punishment and detention towards rehabilitation, with funding redirected towards prevention and reintegration.

She  highlighted the work of justice reinvestment programs such as “Clean Slate Without Prejudice” in Redfern and urged the government to review such successful initiatives for replication “while adapting these community led initiatives to local conditions, in targeted areas throughout the country”.

A new pathway, based on equal respect

Tauli-Corpuz laid out priorities in a range of other areas, including the Racial Discrimination Act, the Northern Territory Intervention, a Human Rights Act, child removal, the Stolen Generations and reparations, violence against women, native title and land rights, and constitutional recognition.

On all fronts, she said greater engagement with Indigenous peoples was key. She concluded by imploring a new dialogue in the spirit of the Redfern Statement.

I urge the Government to take this momentum to reset the relationship with the First Nations of Australia and in a collaborative manner construct a new pathway to the future, based on equal respect.

.@Malarndirri19 Today my colleagues and I met with Ms Victoria Tauli-Corpuz, the UN Special Rapporteur on the rights of indigenous peoples. pic.twitter.com/7uJJMefY6Q