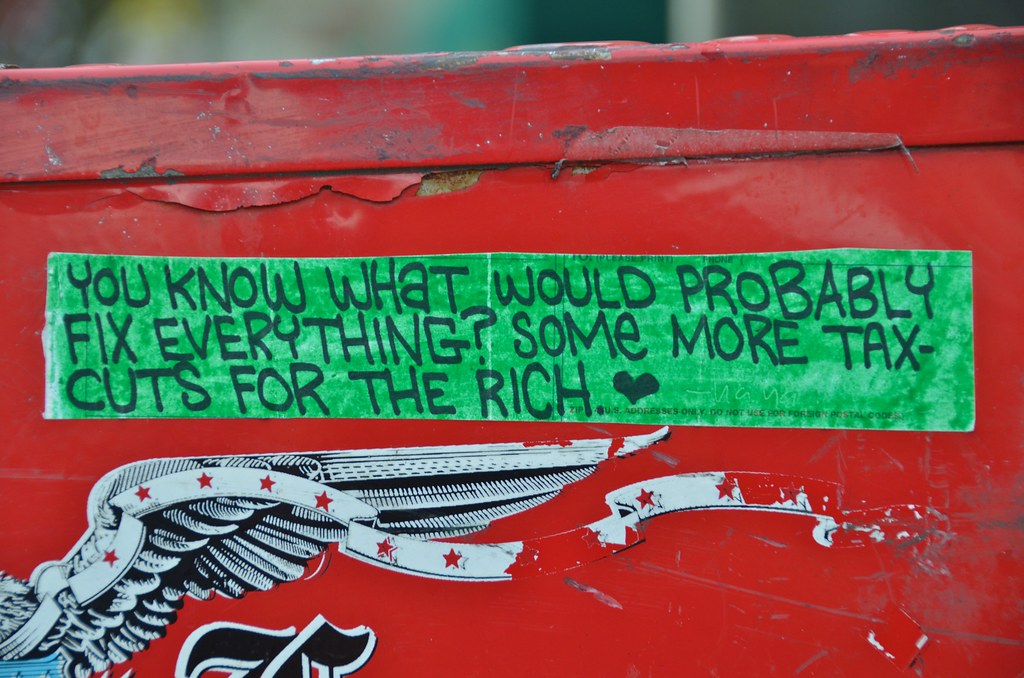 Now the tax cuts are in, it’s time to invest in climate action

Introduction by Croakey: They have been labelled a “triumph of greed and political cowardice” and an “obliterating self-interest” with impacts that will be felt for generations, but now the Morrison government’s tax cut have passed, it’s time to invest that money in grassroots action.

An unprecedented $158 billion will be stripped from government coffers through to 2024-25 after the Labor Party agreed to Prime Minister Scott Morrison’s sweeping tax cuts last week, with as-yet untold downstream impacts on services including health and many of its determinants.

In a scathing editorial titled ‘Destroying Australia’, The Saturday Paper warned the 46th Parliament had “shredded” the nation’s revenue base for health, education and social welfare, tearing up “the social compact that made this country stable”:

People will be worse off under these cuts. They will face greater hardship, have less access to health and to quality education. The people worst affected did not vote for Scott Morrison. Half the country didn’t. The damage done is near irreversible. It is infinitely easier to cut taxes than to raise them. This is a triumph of greed and political cowardice. The Labor Party waved it through…

You don’t pay tax in exchange for services. You pay tax for a society. Under Morrison, you pay less tax and you have less society. The obliterating self-interest of this week will be felt for generations. Morrison’s victory is a huge, huge loss.”

With the major parties in lockstep, these cuts are now a matter of course, but that doesn’t mean the revenue has to be lost to any meaningful action on the challenges confronting our nation.

In this piece for Croakey, social epidemiologist Professor Anne Kavanagh issues a rallying call for Australians to reinvest their cash splash where it is most urgently needed: tackling climate change.

I write this article as a plea to fellow Croakey readers to join me in lobbying Australians to use the Government’s tax cuts they receive to invest in advocacy and infrastructure to address our climate emergency.

It would be great if we could also encourage people who receive tax benefits from franking credits, or negatively gearing properties, to donate the tax benefits they receive. After all, they stood to lose some of these benefits if the ALP were elected, and analysts have pointed out that those in electorates who would most profit from removing these perverse — and uniquely Australian — benefits, swung against the government.

Analyses show that the largest swings away from the Coalition were in electorates with the highest proportion of residents with high incomes. This was also the case in electorates where significant numbers held franking credits, or had negatively geared properties, despite ALP plans to overhaul both.

Many of these people voted against their interests, and it is likely that at least some care deeply about climate change. If we could make the case, I reckon they would be up for making a collective investment in our future.

I believe that there is a real opportunity to persuade Australians to invest their tax benefits for good – specifically to invest in advocacy and infrastructure that address our climate emergency.

The government’s tax package passed the House of Representatives on July 3, after securing the support of the ALP. It sailed through the Senate the next day.

The Australia Institute estimates that these reforms will slash $300 billion from government revenues over the next decade in a “radical reshaping” of the nation’s tax system, with high income earners standing to benefit most.

The most recent tranche, which will come at a cost of $158 billion, will be delivered in three phases:

You can check out what these tax cuts mean for you and other Australians in dollar terms here.

The tax cuts have been controversial, particularly the third stage, which will overwhelmingly favour the better off and are locked in, five years into the future.

Government spending on essential services like education, disability and health — including health services for Indigenous Australians — may need to be clawed back to fund the tax cuts, particularly if we continue on the economic downturn currently predicted by conservative and progressive economists alike.

It is also unlikely that the tax cuts will stimulate a flagging Australian economy because they are targeted at high income earners who have less marginal propensity to spend in the local economy.

Croakey has already examined the implications of the tax package for government spending on health.  Foreign aid will no doubt be cut further, and the opportunity for investment in infrastructure to avert the most damaging aspects of our climate emergency will be lost.

I propose that we, instead, convince the beneficiaries of these generous taxation policies (including many of us) to contribute their windfalls to addressing the climate emergency. This will also enable investment in our local economy and jobs, with economic stimulus a happy byproduct.

Immediately after the election I reached out to like-minded folk to help me lobby and promote these ideas.

It quite quickly became apparent that the idea was way bigger than me, even if I could persuade a few other folk to come along for the ride. After all, I am an epidemiologist and disability advocate, with no experience in leading social movements. I also have limited resources in terms of time, capital and energy — I am full-time employed, have a chronic condition and significant carer responsibilities.

Nonetheless I am passionate and ready to invest, because time is not something we have on our side if we are to avert the worst consequences of the climate emergency.

I have some ideas:

I suggest that we start a group and come up with some goals and strategies.

I anticipate that people will bring different skills such as political campaigning, website design and maintenance, and oral and written communication, as well as links with key organisations, opinion makers and entrepreneurs.

If you want to be involved and/or have suggestions, please fill out the form here by July 20. It will take only a couple of minutes of your time.

Please circulate this article and link to your networks and promote on social media.

I will collate the responses (with anyone else who wants to volunteer) and publish the results at Croakey by July 25, and then we can start organising!

Professor Anne Kavanagh is a social epidemiologist who is well known for her work on health inequalities.