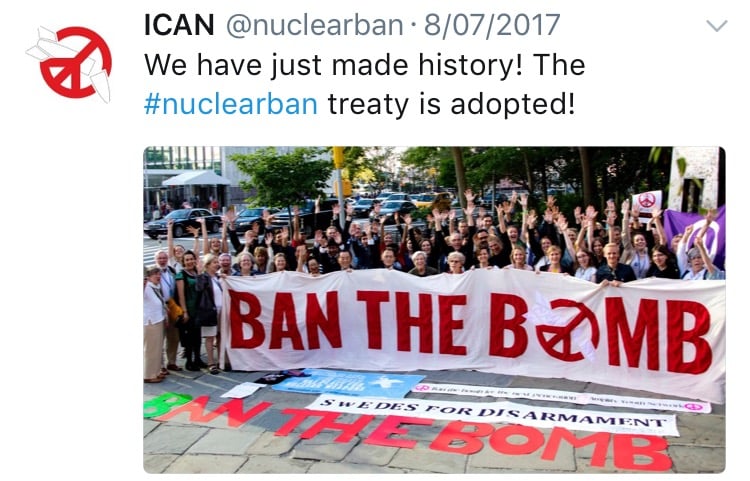 Nuclear Weapons banned at last. Now let’s put Australia on the right side of history

Just over a week ago, at a United Nations meeting in New York, more than 120 countries approved a treaty to ban nuclear weapons.

The treaty, after it is signed in a few months, will outlaw the development, testing, use, trade and housing of nuclear weapons, as well as the use of such weapons as a threat. It makes provisions for victim assistance and remediation for those already affected, and allows for ongoing collaboration in the goal of global disarmament.

You can find an excellent explainer here, on how these and other aspects of the treaty might play out .

The post below, from President of the Medical Association for Prevention of War Dr Margaret Beavis, is part celebration and part admonition. The treaty is a great achievement, she says, but Australia is not yet among the participating countries.

But there is still time. When September comes around, Australia can, and should, sign up.

The world has achieved treaties banning chemical weapons, biological weapons, cluster munitions and land mines, while a global treaty to ban nuclear weapons has proved elusive. But earlier this month the UN finally adopted a resolution prohibiting nuclear weapons. This clearly reframes them as a major health and ethical issue, rather than a benign political tool.

Many assumed the UN Security Council would have the final say and veto this ban, but in fact no veto is possible. The treaty will be ready for signatories on the 20th of September. It will come into force when 50 countries have ratified it.

A treaty with teeth

These treaties have a track record of changing the world. Many scoffed when the land mines ban was mooted, saying it would never work. But it has been surprisingly effective. The UN reports

“Since its inception more than a decade ago, it has led to a virtual halt in global production of anti-personnel mines, and a drastic reduction in their deployment. More than 40 million stockpiled mines have been destroyed”.

The first point of change will be massive divestment. These weapons are intended to kill millions of civilians – non- combatants – a gross violation of international humanitarian law.  Nuclear weapons manufacturers will finally be recognised in a similar way to tobacco companies; as purveyors of death and despair.

The human impacts are very clear. Not only would a limited nuclear war (less than 0.1% of world stockpiles) have appalling immediate effects, but detailed modelling shows a decade-long nuclear winter would follow, reducing crop yields and creating a global famine that will put up to 2 billion lives at risk.

The Commonwealth Bank, Westpac, ANZ and Macquarie all profit from their association with nuclear weapon companies, as does the Future Fund. They all use the excuse that it is legal, but this is no longer true.

Just nine countries with nuclear weapons hold the rest of the world to ransom, despite many undertakings to disarm. The promises made in the Nuclear Non- Proliferation Treaty in 1968 have worn very thin. Remember it was not the slave owners who abolished slavery.

Shamefully, Australia boycotted these negotiations. Australia has tried hard to undermine this process – so much so that our delegation was dubbed “weasels” during the 2016 UN ban treaty working group.

The ALP and the Greens both support the nuclear ban treaty. The treaty is also very popular, with 75% support, according to a recent IPSOS poll.

This is not really surprising, given that Donald Trump and Kim Jong-un are both looking like loose cannons in an increasingly unstable world.  North Korea is much more likely to negotiate if other nations undertake to reduce their nuclear weapons stockpiles.

Australia claims it shelters under a US “nuclear umbrella”. Would we feel OK sheltering under a smallpox umbrella? A chemical weapons umbrella?   Yet nuclear weapons are far worse than both of these.

Australia needs to sign this treaty. New Zealand, a US ally, has for decades had an independent foreign policy. Signing would not only increase Australia’s credibility in our region, it would also show we are capable of acting independently in our own national interest.

*Dr Margaret Beavis is a Melbourne GP. She is president of the Medical Association for Prevention of War, and on the board of International Campaign to Abolish Nuclear Weapons (ICAN) Australia. 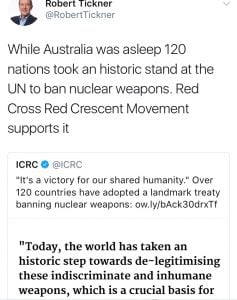 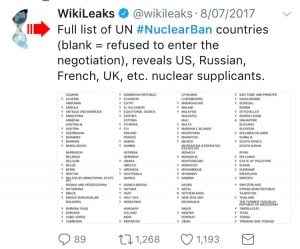 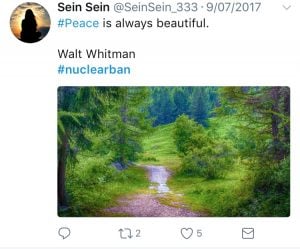 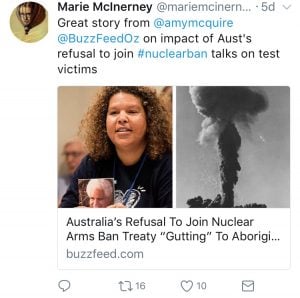 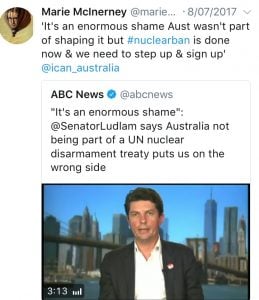 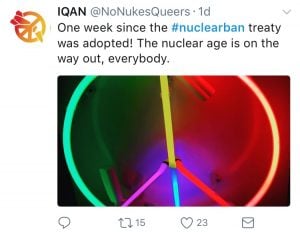 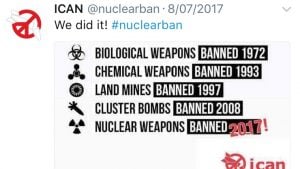 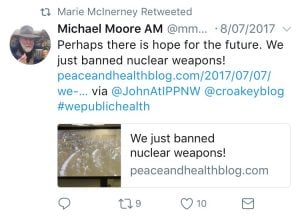