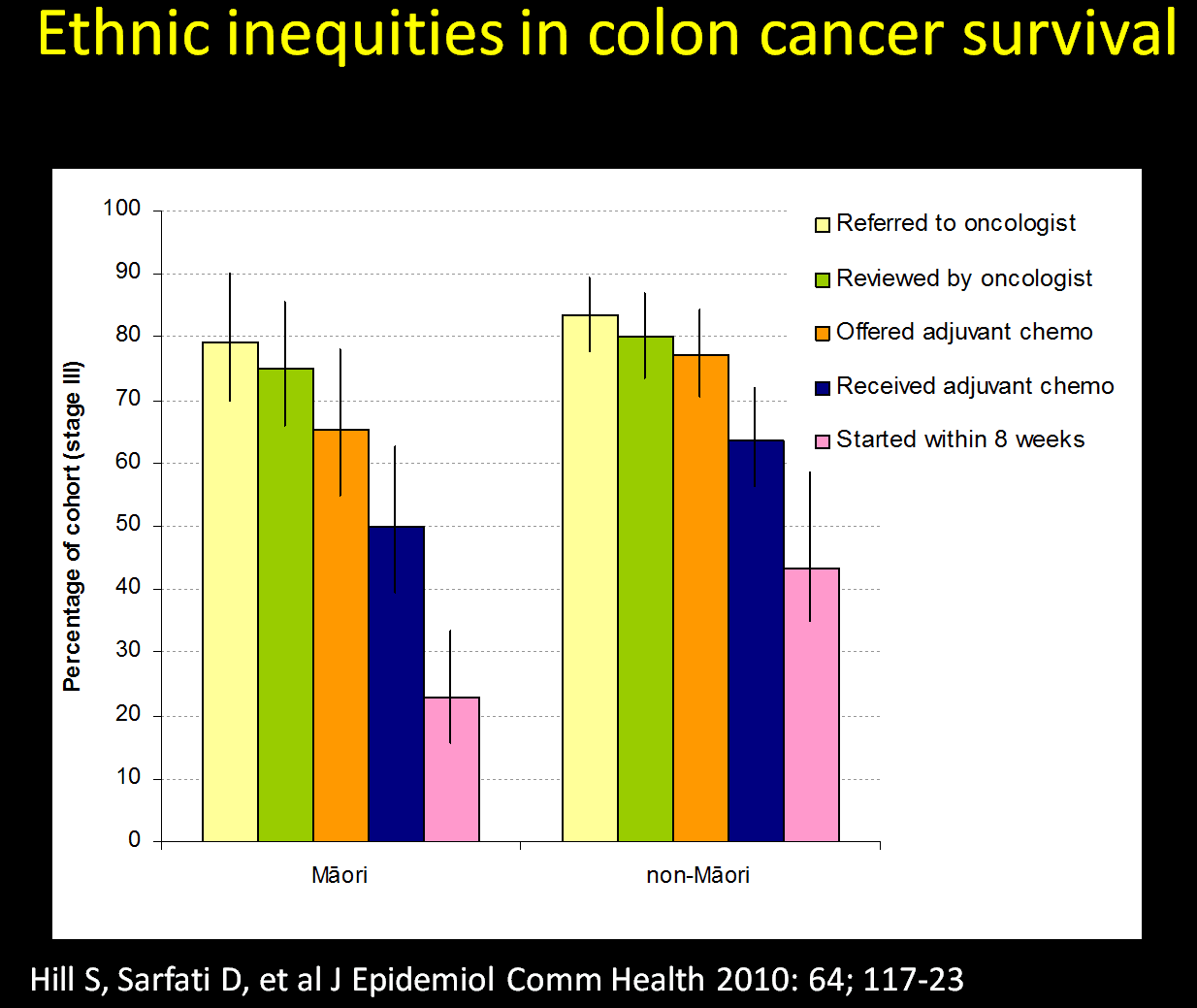 A New Zealand study that aims to look at how and why cancer patients miss out on curative treatment because they also suffer other chronic conditions, such as diabetes, could help to address higher cancer death rates among Indigenous people.

New Zealand cancer researcher Professor Diana Sarfati told the recent World Indigenous Cancer Conference in Brisbane that there was growing international understanding that many cancer patients with comorbidities were being “under-treated”.

This has major implications for Indigenous populations, including in New Zealand where the death rates from cancer are nearly twice as high for Māori compared with the rest of the population.

Her research has shown that Maori cancer patients have a higher prevalence of comorbid conditions, with around two and a half times the rates of diabetes, heart failure, respiratory disease and renal disease seen in non-Maori patients.

“Maori and other Indigenous populations have high rates of comorbidity, those with comorbidity are less likely to get treated, and those who do get treated do better,” Sarfati said. “This then opens up a pathway where we can intervene to improve cancer outcomes and to reduce inequities between Indigenous and non-Indigenous patients.”

Sarfati is director of the Cancer Control and Screening Research Group at the University of Otago. Her plenary address at the conference was: Uneven playing fields, how pathways of care and comorbidity result in inequities in cancer outcomes.

In response to recent research published in The Lancet Oncology, which she reviewed, on the scale and profile of cancer in indigenous peoples of the US, Canada, Australia and New Zealand, Sarfati called for a strategic focus on the burden of cancer among Indigenous people, the need for better monitoring and interventions that address the underlying factors driving cancer inequities.

She said the Lancet study’s most striking finding relates to the high incidence of potentially highly preventable cancers, especially those strongly related to smoking (such as lung cancer) and chronic infection (including stomach and liver cancers) among Indigenous people.

But, she told the conference, Indigenous people also have different treatment and diagnostic experiences along the cancer continuum.

She outlined 2010 research that highlighted inequities in colon cancer survival, where Maori patients had a 30 per cent worse survival than non-Maori patients. Comorbidity and treatment/health service factors each accounted for a third of the survival difference. 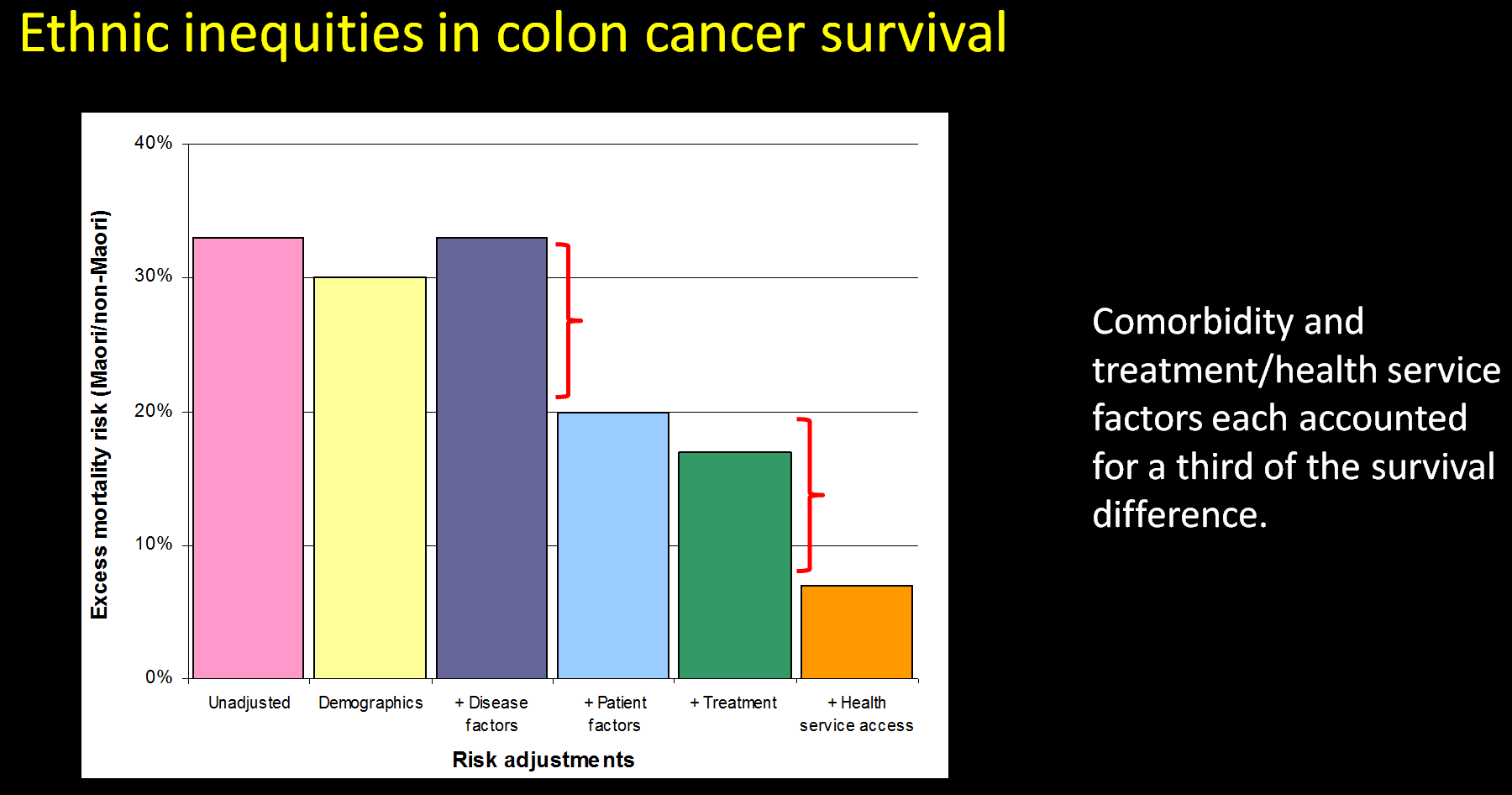 Sarfati said: “At each step along the treatment pathway, there were little differences, always to the disadvantage of Maori patients.”

She described the effect:

“What you can see is that Maori patients with bowel cancer requiring chemotherapy treatment were just a little bit less likely to be referred to the oncologist.

This was not an isolated example. Sarfati pointed to other research that has shown Maori lung cancer patients were four times less likely to receive curative rather than palliative cancer treatment compared with Europeans, “even after adjusting for age, gender, deprivation, comorbidity, tumour type, stage, and whether or not patients declined management.”

“The authors of that study concluded that that sort of difference in receipt of curative treatment would be enough to expect to see a difference in survival,” she said.

Sarfati said international studies have shown that Indigenous disparities in cancer survival are, at least partially, explained by differences in levels of comorbidity.

For example, research led by another conference presenter, Dr Suzanne Moore, found that excess comorbidities were contributing to lower curative treatment rates and poorer cancer survival for Māori and contributed to the survival disparity among Indigenous people with lung cancer in Queensland.

So what is the comorbidity effect?

According to Sarfati, part of the effect of comorbidity on cancer survival is due to the excess physiological demand on patients with comorbidity.

“Patients with serious illnesses and cancer are likely to fare worse as a direct effect of those illnesses on their life expectancy,” she said. “We can’t do much about that by the time patients are diagnosed with cancer.”

However, there are, she said, two pathways between comorbidity and poorer survival that we can do something about. In part, Sarfati said, it’s where some comorbidities may have a direct effect on cancer progression. For example, patients with poorly controlled type 2 diabetes tend to have high levels of insulin and other factors which can actually promote cancer cell growth.

But also, importantly, those with comorbidity are substantially less likely to get curative treatment than those without comorbidity. “This is a really strong effect and we see it regardless of which cancers and which treatment we look at,” she said.

“But underlying these is the assumption that the harms of treatment for patients with high comorbidity outweigh the benefits,” she said. And that, she said, is largely guess work because patients with comorbidities are usually excluded when randomised trials are done.

In fact, she said, high quality studies consistently show that those with similar levels of comorbidity do better when they are treated than those who are not.

With those studies in mind, Sarfati’s team is set to do significant new research on comorbidity and is now recruiting patients for a feasibility study that aims to “de-silo” cancer care.

The study, which she said is breaking new ground, will test whether it’s feasible to look at the identification and treatment of comorbidity within acute cancer settings in New Zealand for patients with bowel cancer. They will look across four main domains:

“The ultimate aims are to improve outcomes for cancer patients with a particular focus on reducing inequities between Maori and non-Maori cancer patients,” she said.

Addressing comorbidity is one promising area of intervention. However, to address inequities in outcomes between Indigenous and non-Indigenous patients, a whole of pathway approach is needed. She listed factors she sees as important: 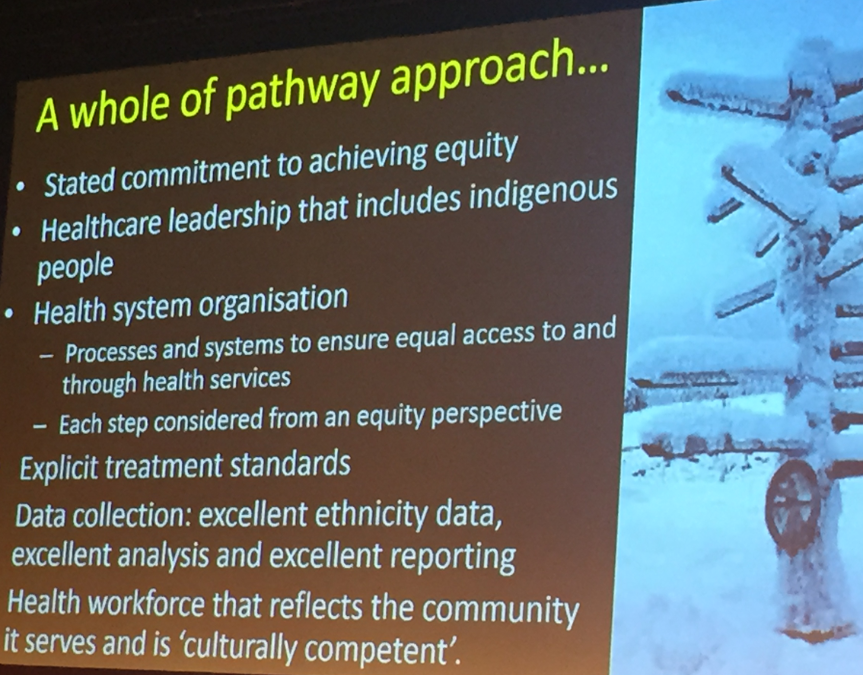 Her take home messages were two-fold: “One, addressing inequity within health care services  means a whole of pathway approach and secondly, addressing comorbidity may be one pathway through which we may be able to address inequities.

And she shared this fabulous quote: “Epidemiology: people’s stories with the tears wiped away.” 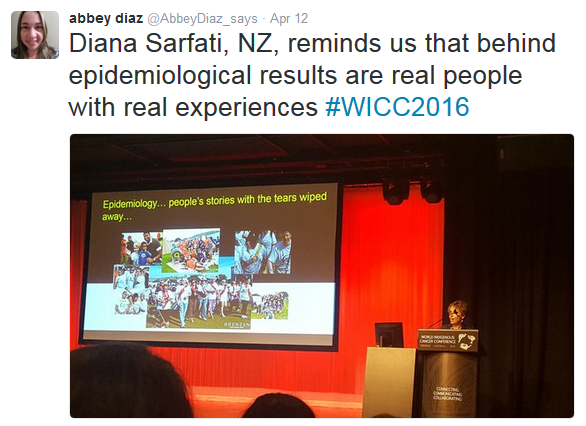 The conference also heard of two projects that aimed to capture and understand the voices of Maori cancer patients and survivors, and how they felt about the health systems that they interacted with.

Tira Albert from the Mana Wahine Maori health service talked about the Cancer Stories of New Zealand research project, in which Maori patients talked about a lack of cultural awareness from health care professionals and that what got them through was often outside the system.

For many, she said, it was a case of communication, language and health literacy.

One patient welcomed the explanation from a surgeon that Grade 3 cells were “more lion than pussy cat”. “I found this useful language to explain to friends,” he said.

Another was not so lucky:

There were similar strong messages in the ‘This strange world that is cancer’ project that explored disparities in health care between Maori and non_Maori New Zealanders.

Cheryl Davies from the Tu Kotahi Maori Asthma Trust said patients appeared reluctant to complain about care, but needed interventions that made the world of cancer “less foreign”, ensured health professionals used clear and understandable lay language, and “nestled in” culturally appropriate services, such as a Maori ‘navigator’ of the health system.

Some tweets from the conference 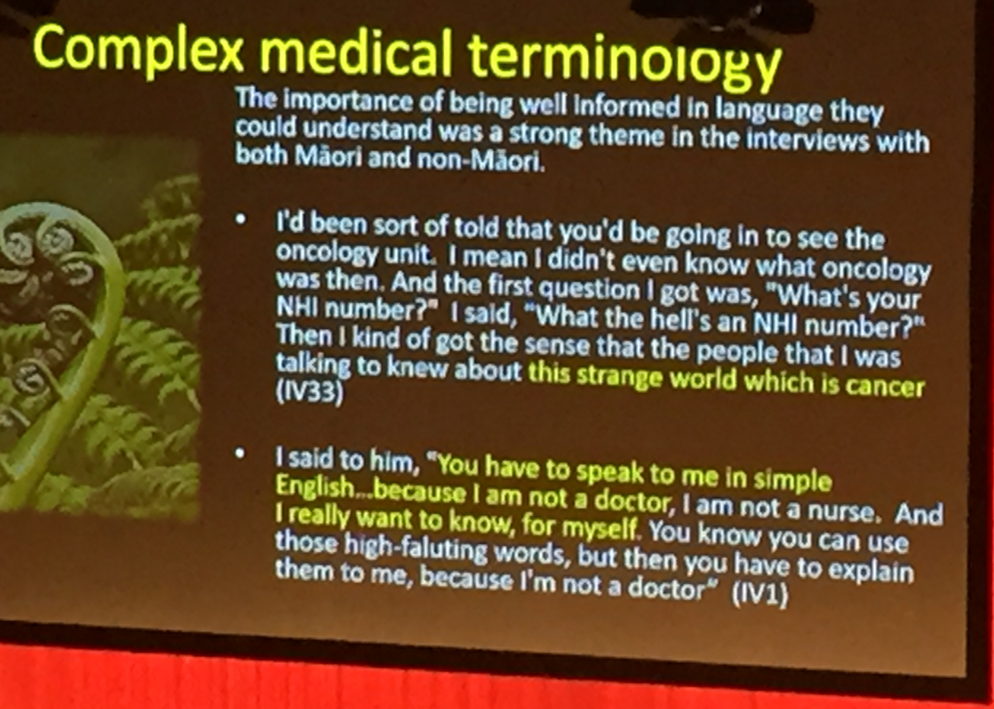 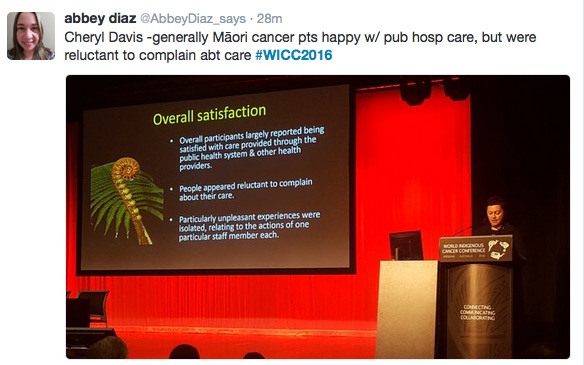 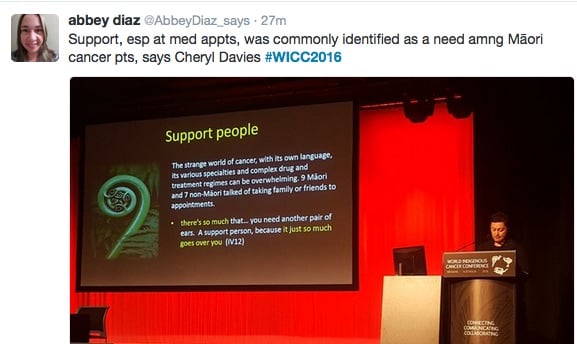