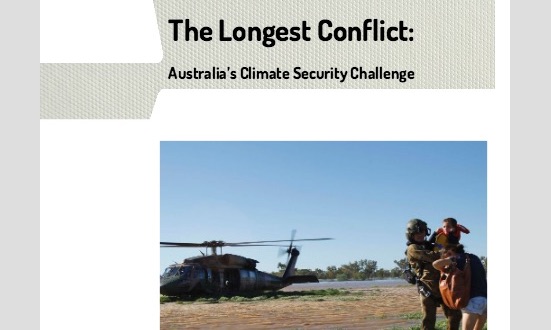 On climate inaction, “we are entering a period of consequences”

The profound threat of climate change to health, security and political stability was a critical message from Population Health Congress 2015, with calls for urgent action from government, industry and the public health sector.

As the Greens leader Senator Richard Di Natale warned conference participants: “If we’re not acting on climate change, then everything else is just background noise.”

Centre for Policy Development analyst Rob Sturrock examined the health impacts of extreme weather, natural disasters and resource insecurity in Australia and throughout the Indo-Pacific, including how this will interact with political and social instability in our region – all at a time of massive cuts to Australian aid.

Another keynote speaker, veteran Canadian health and environment campaigner Professor Trevor Hancock, challenged government and industry to walk away from their 19th century beliefs that economic growth is always the answer.

But he also put a challenge to the public and population health sector, which he said had been “ecologically blind” and now has to “walk the talk” on global environment change in its own education, training and advocacy.

The need for more effective public health advocacy and intervention in this area is clear, as illustrated by the news that Australia has joined New Zealand at the Pacific Island Forum in refusing to back ambitious climate action. (Update, 11 Sept: Also see Federal Government Ministers joking about climate change). 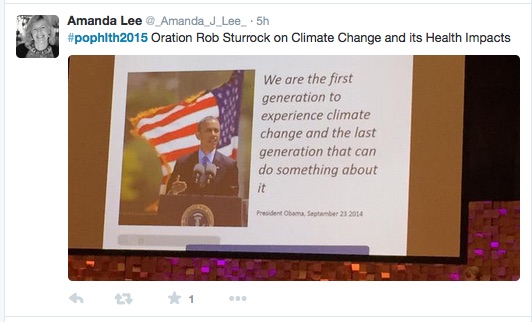 In the Congress oration, Rob Sturrock described the wide-ranging impacts of a series of extreme weather events.

On 30 July this year, he said, the temperature in the Iranian city of Bandar Mahshahr, recorded a heat index reading of 74 degrees Celsius. The day before it was 70 degrees Celsius.

“Quite simply, this is a temperature scenario that few could believe would occur in a populated area,” the lead author of The Longest Conflict: Australia’s Climate Security Challenge told delegates.

But it wasn’t alone and it wasn’t one-off: The Middle East, a global climatic hotspot like the Pacific, experienced an intense heatwave during June and July that saw scorching temperatures recorded across the region.

By the end of July, he said, temperatures in Baghdad were regularly above 48 degrees Celsius, placing enormous pressure on its strained and unreliable electricity network.

“The heat combined with inadequate infrastructure led to several thousand people demonstrating in Tahrir Square in Baghdad. The Prime Minister gave a national address stating that unless action was urgently taken to address the heat problem, he understood the people would resort to revolutionary sentiment.”

It’s a recognition, Sturrock said, extreme heat does not just cause poorer health or increased mortality but puts political stability at risk.

On top of that, he said, is the looming issue of “resource scarcity” as growing global population and consumption will see demand for food grow by 35 per cent, for water by 40 per cent, and energy by 50 per cent over the next 15 years.

In worrying news for the Federal Government’s aid and refugee policies, he said resource scarcity will have a multi-faceted impact on population health, “as people will not only be faced with fewer resources (food, water and energy), but the political and social problems that scarcities will exacerbate, particularly in the Indo Pacific”.

“Natural disaster, economic destruction and displacement will have a profound effect on the region’s human security, including its ability to cooperate to rebuild and stabilise disaster-ravaged areas of neighbours and partners,” he said.

Sturrock cited warnings that the global food system could “collapse” by 2040, and a recent study that found degrading nutritional value of crops, especially in Asia where zinc, iron and protein levels were all falling in staples such as wheat and rice.

He said Australia will be increasingly sought to provide emergency humanitarian responses to these and other regional crises.

But we are also vulnerable at home, where extreme temperatures and reduced rain will make areas like the Murray Darling Basin susceptible to pests, crop diseases and reduced water quality and volume. That will pose a big risk to nutritional health, including for Indigenous communities.

“Resource insecurity will not only have direct health impacts, but have the capacity to generate conflict and violence in vulnerable communities and nations. Food and water security concerns will be driven by booming regional populations with rapacious demands.

Energy infrastructure will come under increasing strain as it already has in places like Karachi, Baghdad and Bandar Mahshahr. Thus the inter-play between food, water or energy shortages, aggravated by ongoing climate change, is sufficiently dangerous to geopolitical instability and the likelihood of conflict.

There is evidence emerging that the consequences of climate change are stressors that can accelerate a mix of underlying social instabilities that can create political unrest and conflict.

It has been suggested for example, that a once-in-a-century drought in China influenced the uprisings in Egypt: Chinese drought conditions lead to reduced domestic wheat production, subsequently contributing to global wheat shortages and eventually sharp increases in bread prices in Egypt, the world’s largest wheat importer. Similar examples reveal climate change correlations with instability in Libya (regarding water insecurity) and in Syria (regarding prolonged local drought).

Inevitably such conflict leaves a long column of physical and mental health problems to a beleaguered, and often displaced, population.”

Sturrock ended his presentation with this quote from Winston Churchill about the cost of inaction as the growing shadow of war was cast over Britain: 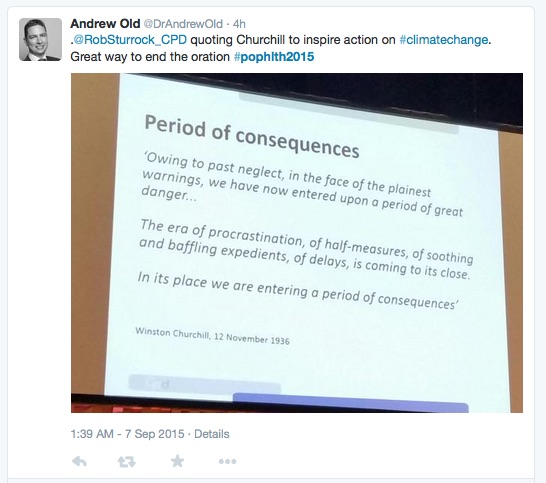 See also this article from The Age.

“Welcome” to the Anthropocene

Trevor Hancock was the founding leader of the Canadian Greens, helped start the Healthy Cities movement and was a founding member of the Association of Physicians for the Environment.

He is now leading a Canadian Public Health Association (CPHA) project to document the potential health impacts of major global ecological changes and to propose an action agenda for public and population health which he says has been “ecologically blind” with its focus on the social determinants of health (SDOH).

The project recently released this report, which includes a range of recommendations for the public and population health sector (more below) and calls on the UN to establish Commission on the Ecological Determinants of Health.

Hancock’s message was also grim, starting with this video: Welcome to the Anthropocene and saying we had already “passed the point of no return” in many aspects of ecological health.

Our current economic and social system is, he said, driving global ecological change beyond just climate change and into a “sixth great extinction” distinguished this time by the fact that we are causing it.

“We have entered the Anthropocene,” he said.

Hancock sees the greatest resistance to change coming from politicians and industry still living in the 19th Century and thinking the answer to all problems is economic growth.

Adopting the equation of impact = population x growth, he said one per cent annual population growth and three per cent economic growth over 80 years would see a 23 per cent rise in the impact of a child on the planet over the course of a lifetime.

He is aghast that gross domestic product (GDP) can still be considered a useful measure. Its most idiotic logic, he says, is that the economic activity of the tobacco industry contributes to GDP, “including all of the health costs we incur to treat people with tobacco related diseases.”

“If you really want to grow GDP, sell more tobacco and make more people sick! So we need to find a new way to measure progress,” he said.

But Hancock said there was no point in spelling out the bad news without having recommendations to try to address it.

Prompted in the lunch break by fellow keynote speaker, Indigenous health leader James Ward, he pointed to the report’s foundations for reconnecting social and ecological determinants of health that include recognition of Indigenous people’s connections to country: 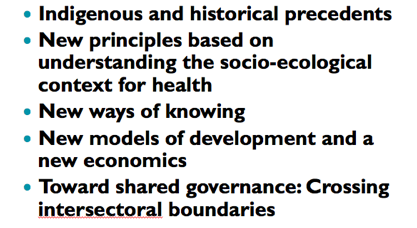 He said the CPHA report was specifically targeted to public health: “If we don’t get our own professionals to understand the issues, become ambassadors in the communities, then we are not going to convince the rest of the world.”

He also urged the sector to make greater use of Public Health Acts, against governments and businesses doing harm, including to put pressure on coal and energy sectors. “We have a lot of powers, we just don’t use them in the right way.”

And, in the face of harsh reality, he offered hope and optimism, saying “we have been there before”.

“If you were in Manchester (UK) in 1850 it looked like the end of the world. Air pollution, water pollution, lousy jobs: the life expectancy for the labouring classes was about 17 years, with massively high mortality rates because of the appalling conditions,” he told Croakey.

“Look back to what we did on clean water and sewerage, pasteurised milk, now tobacco,” he said. “We’ve done major change before, and we’ve got to do it again, and again and again.” 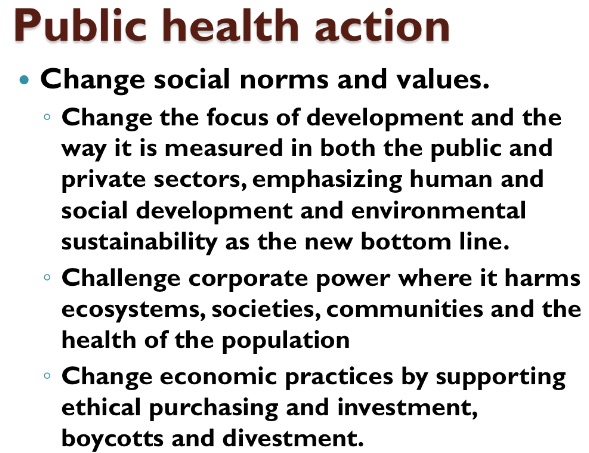 Reporting from the Twitterverse 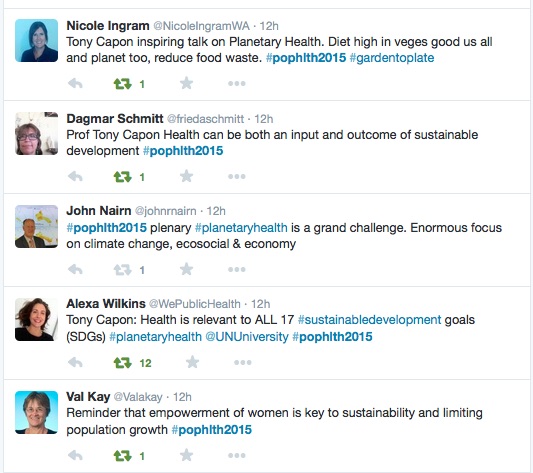 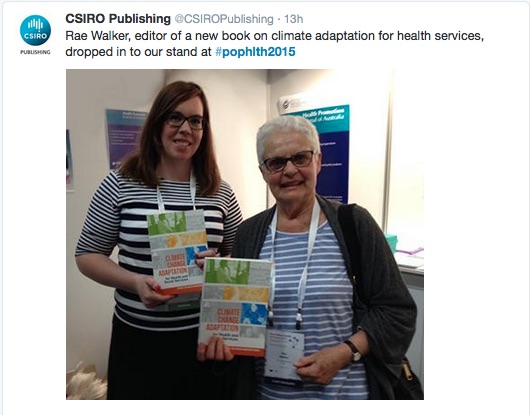