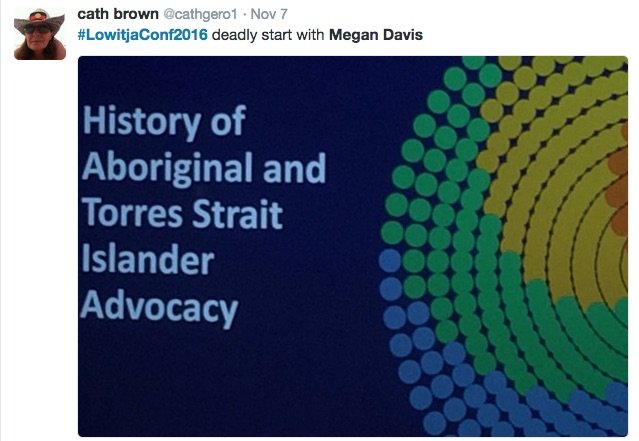 On self-determination, sovereignty and other critical Indigenous health matters 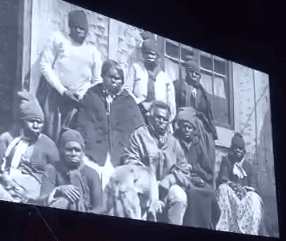 The screen flicks through old black and white photos of Aboriginal and Torres Strait Islander people staring straight to camera, as Indigenous film-maker Rachel Perkins reads from the 1846 petition to Queen Victoria from Aboriginal people exiled on Flinders Island in Bass Strait.

They humbly urge the Queen to protect them from a tyrannical overseer and express disappointment at the failure of colonial authorities to keep their promises – “an agreement which we have not lost from our minds since & we have made our part of it good”.

These are the opening lines from a 12-minute segment of a documentary being made by Perkins and Indigenous constitutional law reform expert Professor Megan Davis.

When finished, it will be shown at a series of Indigenous-led dialogues across the country staged by the Referendum Council to advance work on recognising Aboriginal and Torres Strait Islander peoples in the Constitution. Hopefully it will also be shown more broadly, particularly in schools and workplaces.

Davis provided a sneak preview of the film last week during her keynote address at the Lowitja Institute International Indigenous Health and Wellbeing Conference 2016 in Melbourne.

It tracks continuous calls for justice and self-determination from Aboriginal and Torres Strait Islander people since colonisation, and underlines how these calls have been mostly ignored or rejected.

It traces the 1881 petition from the Yorta Yorta people to the Governor of New South Wales for “a sufficient area of land granted to us to cultivate and raise stock”; the 1886 Corranderk petition: “We should be free like the White Population, there is only few Blacks now remaining in Victoria, we are all dying away now…”; David Unaipon’s call in 1926 for the establishment of an Aboriginal state; William Cooper’s 1933 Petition to the King; the 1938 Day of Mourning; the Wave Hill walk off; and the 1967 Referendum.

It’s a powerful history lesson that’s still yet to be taught well in most Australian schools, providing a catalogue of places and people that should be household names.

And it comes amid growing frustration in Aboriginal and Torres Strait Islander communities that decades of vital inquiries and recommendations for urgent change, such as those from the Royal Commission into Aboriginal Deaths in Custody and the Bringing Them Home report, end up in filing cabinets and on dusty shelves, not in action on the ground.

Donna Ah Chee, CEO of the Central Australian Aboriginal Congress in Alice Springs, said we should not have needed a Royal Commission into the abuses at the Don Dale juvenile detention centre.

“I think what we need is a Royal Commission into why are there all these reports, what’s happened to the recommendations,” she told Croakey at the conference. (Watch her video interview here with Dr Megan Williams about the success of CAAC’s integrated model of child and family services as a core part of primary health care.)

“Aboriginal people are sick and tired of being consulted,” she said. “It’s about time governments started to implement what we see works and what we know makes a difference.”

Bipartisanship, fatigue and time for some dreaming

For Davis, immediate past Chair of the United Nations Permanent Forum on Indigenous Peoples and a member of the Referendum Council, the film shows that all significant developments in Indigenous advocacy for structural reform “have come through activism or litigation”.

It also raises questions for her about a tradition of bipartisanship on Indigenous issues in Australia, as she outlined in this article in The Monthly about the failure of successive governments to listen to the work, ideas and research of Aboriginal and Torres Strait Islander communities.

She said bipartisanship intuitively makes sense for coherence and continuity. But she says it does not always sit well in a parliamentary liberal democracy where important disagreement about the substance and content of laws and policies should be publicly ventilated and debated – particularly Australia’s “disavowal” of self-determination.

“In some ways bipartisanship has locked our people out of the conversation, because those discussions are had about us behind closed doors,” she said.

Davis told delegates she accepts there is “Constitutional reform fatigue” in the community and much concern that recognition will be “just a commemorative plaque” rather than substantive, structural reform that changes Aboriginal and Torres Strait Islander peoples’ lives on the ground.

But she said the work goes on. The Referendum Council, appointed last year by Prime Minister Malcolm Turnbull, has held meetings this year in Broome, Thursday Island, and Melbourne to invite advice from Traditional Owners, Aboriginal organisations and leaders, and people involved in Treaty discussions.

Flowing from that, she said, will be a new phase – deliberative rather than consultative – to explore what Aboriginal and Torres Strait Islander communities want reform to look like.

This will end next year (once hoped to be the year in which the referendum would be held), with a national convention of Indigenous leaders at Uluru, where “the political pragmatism and feasibility of all these measures and viability will come into play”.

But Davis hopes that 12 First Nations dialogues to be held in coming months will allow some time to dream, even though the reality of the past and the film may discourage them.

“To ask communities to imagine Australia could be a different place requires them, often very vulnerable communities, to suspend disbelief about the way politics deals with Aboriginal and Torres Strait Islander people,” she said.

The deliberations will ask them “to separate out their political thinking and their questions about viability and political reality, and spend some time just dreaming what meaningful change would look like for them on the ground.”

Earlier at the conference, Lowitja Institute patron Dr Lowitja O’Donoghue had called on Aboriginal and Torres Strait Islander people working in health research to heed the powerful words of poet Oodgeroo from Song of Hope:

To our fathers’ fathers

The pain, the sorrow;

To our children’s children

“To borrow from Lowitja and Oodgeroo: Let’s use this opportunity to take our place at the heart of the nation and build that glad tomorrow.”

In another session at the conference, medical anthropologist Dr Gregory Phillips talked about the need for a true substantive shift in power for Aboriginal and Torres Strait Islander people, from the wards of hospitals through to Constitutional reform.

A research fellow at the Baker IDI Heart and Diabetes Institute in Melbourne, Phillips pointed to evidence that self-determination is “the factor that makes a difference” in health and social outcomes – more than workforce capacity, funding levels, and the design of programs.

Yet, he said, Australia continued to mistake inclusion for equity.

Drawing parallels with feminism and marriage equality movements, he said Australia was good at “doing equality based on white terms of reference”, where Aboriginal and Torres Strait Islander people were expected to be grateful for being included – on advisory and reference committees “ad nauseum”, through to in the Constitution – rather than having the system cede power.

It’s a challenge that he said he recently put to the Victorian Government, which is independently working to build the pathway to a Treaty.

Phillips welcomed the commitment, describing a Treaty as “a seat at the table” versus the “crumbs off a table” that Constitutional Recognition delivers. But he said it still needs to be given effect by Western sovereignty, is subject to the whims of governments and is “still not a fundamental change in the power imbalance”.

That manifests in the health system with acts of “charity”, such as Reconciliation Action Plans and NAIDOC week sausage sizzles, while Aboriginal and Torres Strait Islander people are still seen as the problem, “naughty people” who drink too much and don’t eat enough fruit and vegetables.

“If we define individual capacity and compliance as the problem….then that’s what your intervention is going to be,” he said.

As in his thesis, Phillips said the power dynamics of domestic violence can open a window on how to think about “whiteness” in Australia, in the often sick relationship between Aboriginal and non Aboriginal people that is based on power, manipulation and blame rather than confronting truth.

That’s to be seen, he said, in the concession from the Expert Panel on Constitutional Recognition to put aside demands for greater Aboriginal and Torres Strait Islander sovereignty because they would be highly contested by many other Australians and could put Recognition at risk.

“I don’t blame anyone for incrementalism … but if that’s all we do, we’re putting our power in the abuser, hoping they will change,” he said.

“What we do in Australia is we try to forget, to just go forward and do the ‘warm fuzzies’.

“We have to change the national conversation from reconciliation to truth and reconciliation or, to be honest, to peacemaking because …. we’re still in the war in many ways.”

Reporting from the Twittersphere 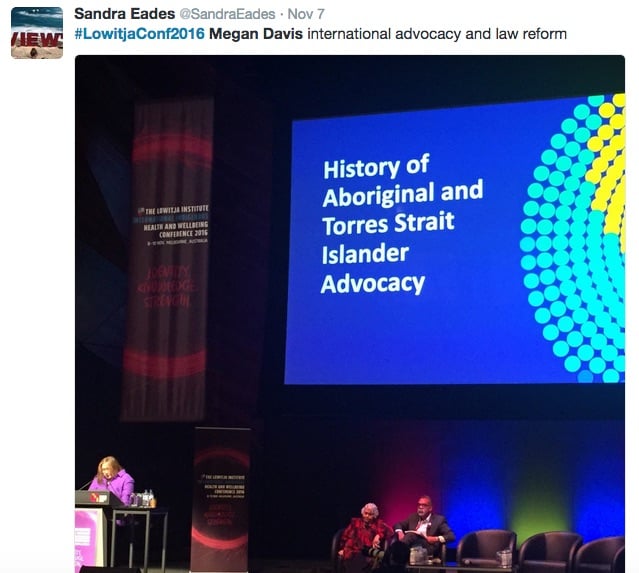 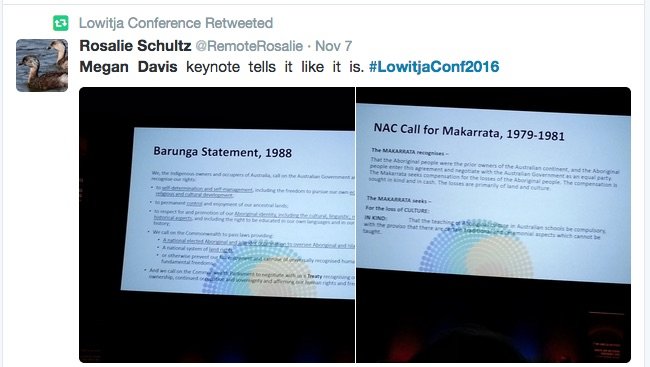 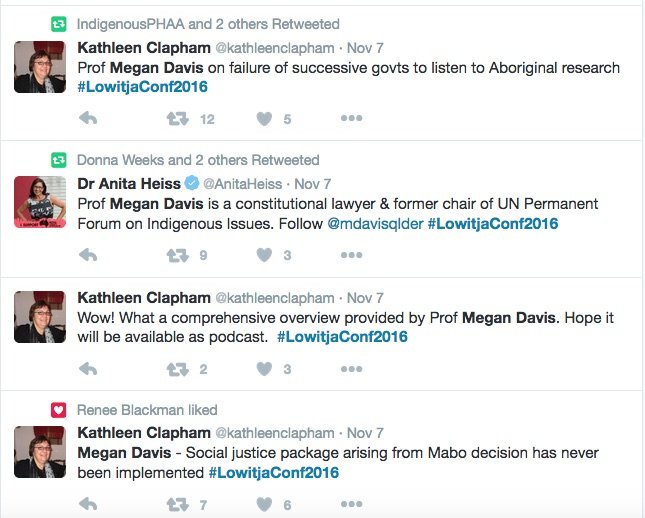 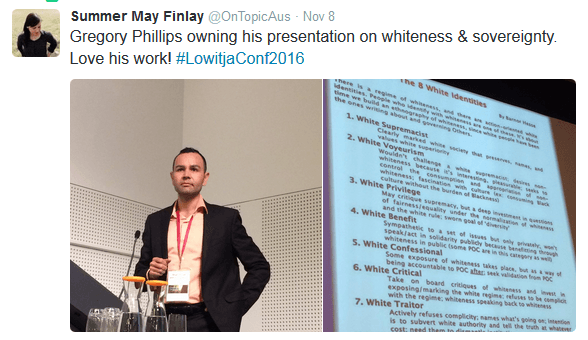 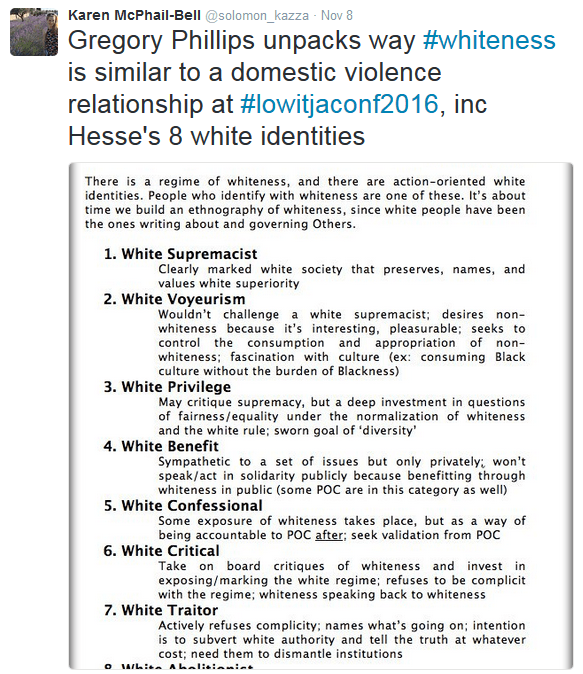 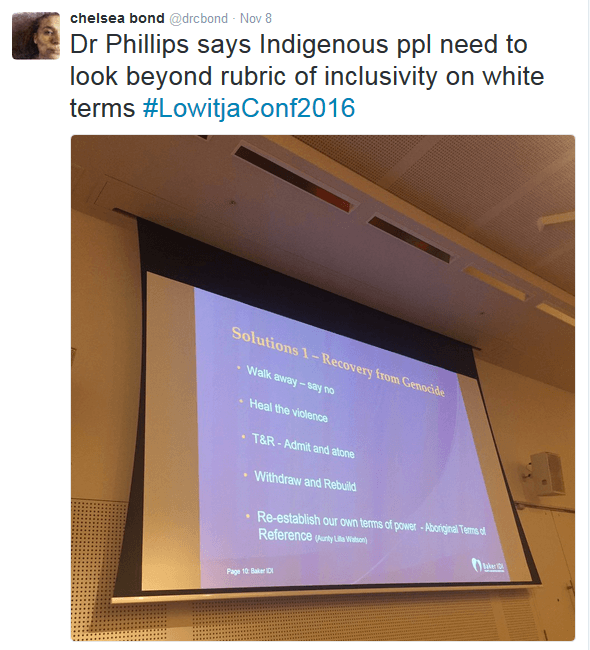 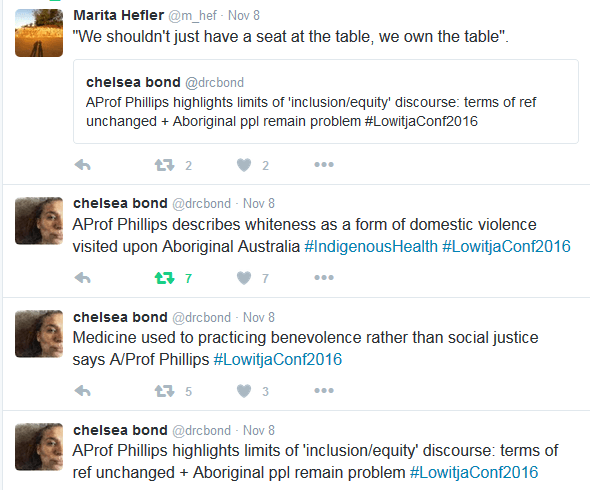 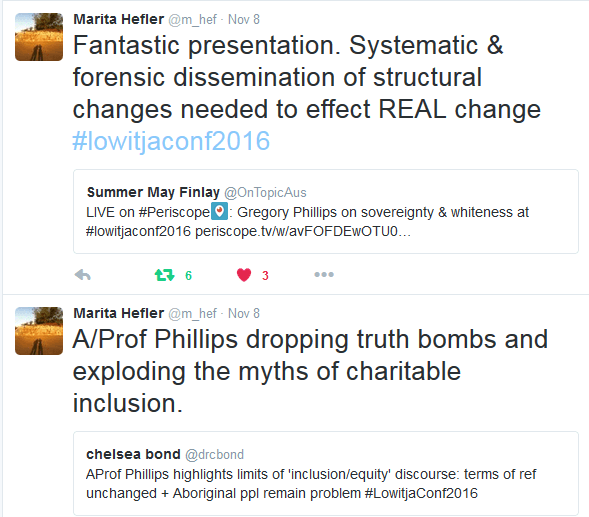 Bookmark this link to track the #LowitjaConf2016 coverage.