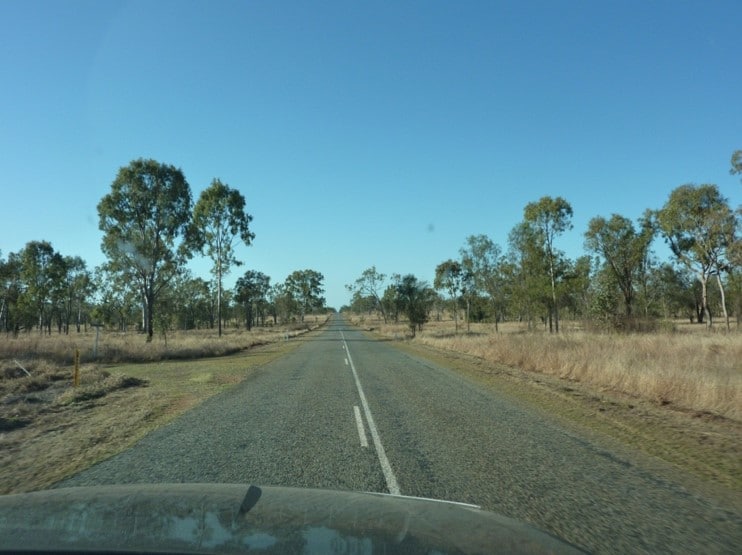 Longstanding concerns about food insecurity in remote and discrete Indigenous communities are coming to the fore during the pandemic, underscoring the need for meaningful reform, according to senior academics, Professor Bronwyn Fredericks and Dr Odette Best.

“We need to see significant shifts that results in food security moving closer to being a reality for all Australians, and not just for the greater majority,” they write below.

While some people are posting photos of themselves cooking, receiving deliveries from their local takeaway and supermarket, or complaining about the type of food they are receiving from a hotel while in quarantine, there other Australians struggling just to get access to basic food on a daily basis.

In Australia, as in other parts of the world, the food insecurity issues that existed long before COVID-19 have been exacerbated during the pandemic. There are a range of reasons people might experience food insecurity, including income level, lack of access to adequate nutritious food, along with difficulty accessing food storage and cooking facilities. It’s well established that food insecurity can contribute to increased risk of poor nutrition, obesity, chronic disease, and other conditions.

Aboriginal and Torres Strait Islander people, regardless of whether they live in urban, regional or remote communities, can all experience food insecurity.

The evidence suggests that Indigenous Australians living in remote and discrete communities experience a greater risk of food insecurity than other Australians due to accessibility and the added cost of transporting and storing fresh, nutritious food, coupled with income levels. One study found the costs of food could be up to 70 percent higher in discrete and remote communities.

For decades Aboriginal and Torres Strait Islander communities have been raising food insecurity issues with government representatives, NGOs, researchers, and others have witnessed the development of strategies, initiatives and programs. In more recent times, we’ve seen the reality of food shortages and pricing raised in other platforms via the increased use of television and radio, along with social media in an attempt for their issues to be addressed. 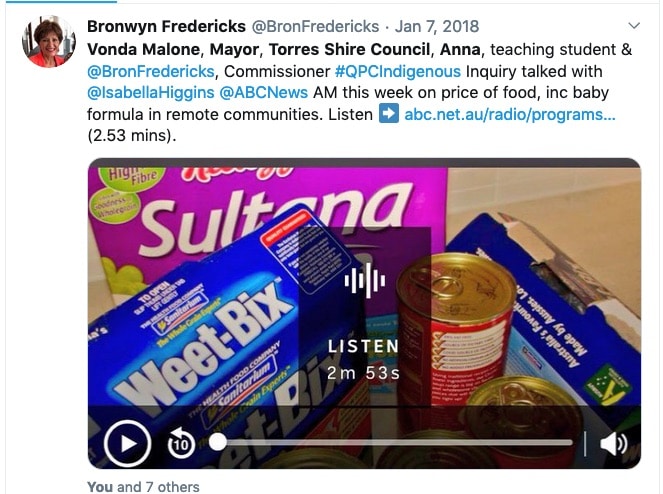 From time to time we see an article or news item about the price of a lettuce, an avocado, meat, hygiene products, or baby formula, and then donations of food made to communities. One recent example – which generated national and international attention – was a photo of baby formula on social media, which normally sells for between $22-$30 in an urban locality being sold on Thursday Island for $85. 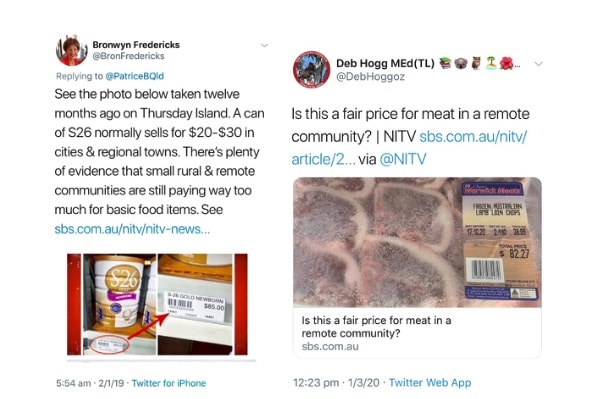 Over time these type of inflated prices have resulted in community members having little or no choice but to select less healthy and cheaper options, or sadly go without.

The issue of food insecurity amongst discrete Aboriginal communities is complicated further with the lockdown laws that have been imposed upon some of these communities as a self-determined process, but others as a result of government imposing lockdown.

On government-imposed locked down amongst discrete Aboriginal communities, a new set of factors of food insecurity comes into play.

The impacts of food insecurity are often alleviated throughout discrete communities by members accessing traditional foods to supplement their diets – a vital element of a cultural determinant of health. With lockdown occurring, how can supplementation of traditional foods be continued?

Moreover, in discrete Aboriginal communities, car-pooling often will occur to travel to the nearest regional centre which maybe anywhere from a two to ten hours’ drive, to buy foods that are not impacted by price gauging in their local community at the basic grocery store on the basic foods such as bread, milk, fruits and vegetables and meats.

Within locked down communities the issue of food insecurity is real and is rising due to COVID-19, and has bought a new set of complications.

Further, government-imposed lockdown has the potential to impact upon the social and emotional well being of community members.

It has to be remembered that some discrete Aboriginal communities only ceased being locked down through legislation 40 years ago and that Elders and Senior members of the community have the lived experiences of living under a government imposed lockdown and the rations system of white flour, white sugar, tea and bully beef – beginning the impacts of chronic diseases amongst our communities such as diabetes.

One of the issues with some of current public health nutrition and food insecurity approaches is that they place the responsibility onto Indigenous people and communities to address the problems, when what is needed is policy change and systematic and structural reform. The result of lack of appropriate government action is continued indifference from policy makers, other government officers, and the general public, along with the continued indifference to ongoing Indigenous ill health.

Evidence demonstrates that continued food insecurity may contribute to malnutrition, multiple and complex health conditions and failure to thrive in children, which can result in poorer health outcomes.

While remote and discrete Indigenous communities and differing levels of government have explored solutions to food insecurity over numerous decades, it persists – as do the systemic and structural issues that compound food insecurity.

This is the context in which numerous communities find themselves amidst the coronavirus pandemic. Border and regional restrictions, along with Indigenous community lockdowns, coupled with food and product shortages, have resulted in even greater difficulty with food accessibility, and raised concerns about price hiking during a time of need.

Fears are expressed for people who might have to travel to other communities, in some cases long distances, to access food, despite government lockdowns, putting themselves and others at risk. Elsewhere, other communities are seeking donations of food in order for it to be shared across their community and regions.

While local governments, NGOs and community members rally to try to address the immediate need for food, cleaning products and toilet paper, the bigger issues associated with the lack of equity that results in continued food insecurity within Indigenous communities remains.

If ‘good health for all Australians’ was important to governments, policy makers, and the broader populous, we would see attention and resourcing given to the mechanisms that enable access to safe, affordable, nutritious food on an ongoing basis.

We would see sustainable solutions to freight and refrigeration storage, economic viability of shops, scale concerns, and infrastructure and staffing issues. These measures are only a few recommendations that have been listed in numerous reports over the years, along with others that need to address bigger systemic and structural reform.

The reform agenda needs to include elements that will address the entrenched systemic problems, and not contribute to or maintain them, or result in merely a tinkering around the edges.

Governments need to recognise that the structural changes require significant policy shifts that include both economic development and service delivery objectives for individuals, communities, and businesses, and not simply a trickle of investment into programs, and a reliance on social enterprises, and goodwill.

We need to see significant shifts that results in food security moving closer to being a reality for all Australians, and not just for the greater majority.

If not, we will continue to witness ongoing food insecurity and the poor health outcomes that many Indigenous people and communities experience, and which is heightened at a time of crisis.

Bronwyn Fredericks, Professor and Pro Vice-Chancellor (Indigenous Engagement) at The University of Queensland.

Odette Best, Professor, School of Nursing and Midwifery and Associate Health Indigenous Research and Community Engagement at the University of Southern Queensland. 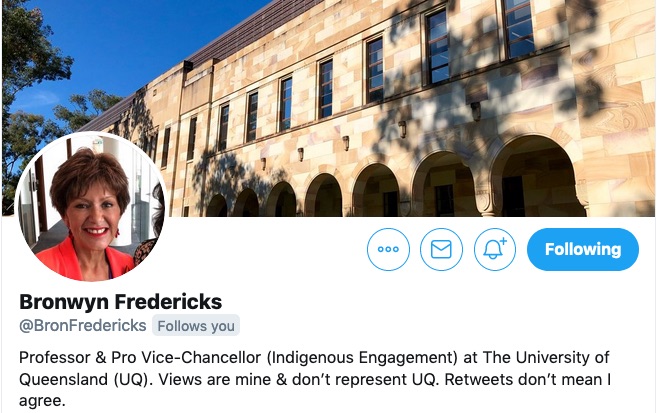 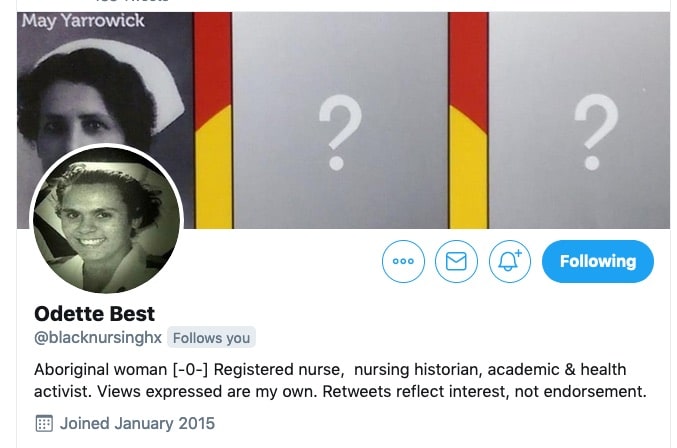