Home Public health and population health public health On the road (for 900 kms) to a nuclear ban treaty: ICAN urges Australia to sign up

On the road (for 900 kms) to a nuclear ban treaty: ICAN urges Australia to sign up

Cyclists and supporters will today (Thursday) end a 900 kilometre trek from Melbourne to Canberra to mark the first anniversary of the Treaty on the Prohibition of Nuclear Weapons opening for signature at the UN, calling on Australia to sign up.

The riders have trekked from Melbourne, the birthplace of the International Campaign to Abolish Nuclear Weapons (ICAN).

Tucked away in one of the backpacks, and on proud show in towns along the way has been a small golden medallion, awarded last year to ICAN for its role in the development of the treaty – the first Nobel Peace Prize to be awarded to an Australian-founded group.

Members of the public, and particularly health policy and practice professionals are encouraged to join them in a final ride (or walk) to Parliament House (see details below).

Health care professionals and organisations are urged also to sign up to these calls to action organised by the Medical Association for the Prevention of War (MAPW).

Nuclear weapons represent an overwhelming threat to human and environmental health. They have the capacity to cause death and suffering on an unprecedented scale, with widespread destruction of healthcare and other infrastructure and the natural environment. In the event of their use again, very little humanitarian response would be available to assist any survivors.

The riders have slept in church and community halls, shared ‘pot luck’ dinners and staged information events in Benalla, Albury/Wodonga, and Gundagai with local councillors, unionists and residents.

As you’ll see from the tweets and pix below, they’ve visited and invited every MP along the way to sign the Parliamentary Pledge to support the nuclear ban treaty, and won significant interest from rural and regional media outlets along the way, including in this piece.

See also this story from SBS as they headed off earlier this month.

Among the riders has been Dr John Stace, a retired GP from Perth and member of  the Medical Association for Prevention of War who, aged 74,  has cycled the whole way from Melbourne.

“So many of the people we’ve met on this journey have been shocked to hear that, unlike New Zealand and other close allies, Australia hasn’t yet signed on to the ban – in fact it has actively opposed it,” he said.

Stace says Australia’s efforts in tobacco control are an inspiration and answer to those who say it is impossible to take on such entrenched interests as the nuclear states.

Where and when on Thursday 20 September:

Declaration: Marie McInerney is a former Board member of ICAN and has been working with organisers of the #NobelPeaceRide. 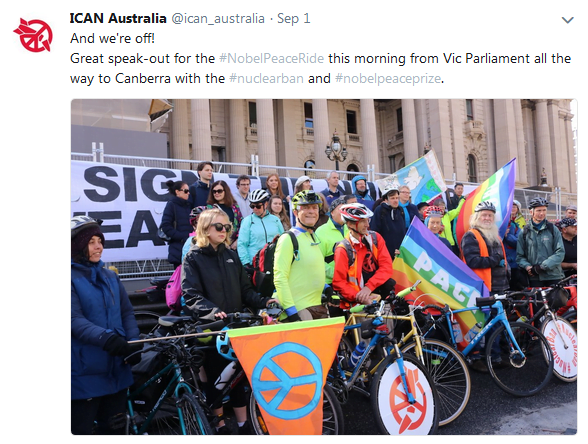 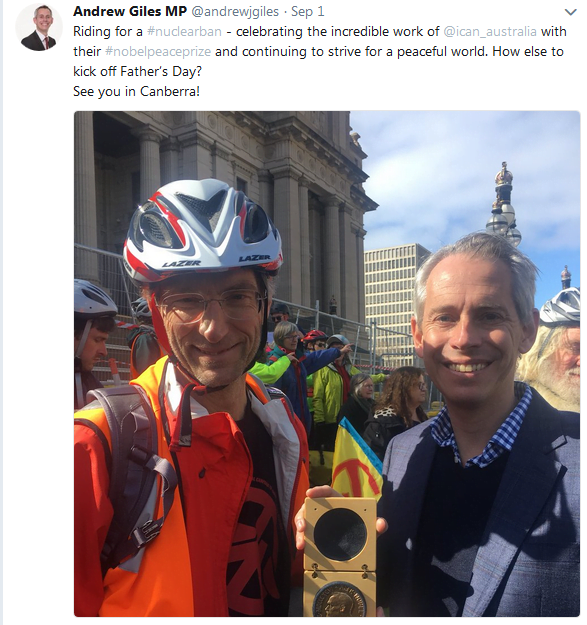 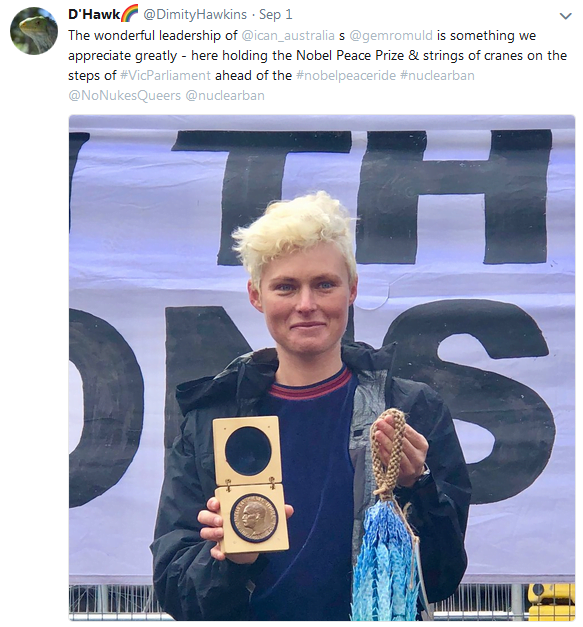 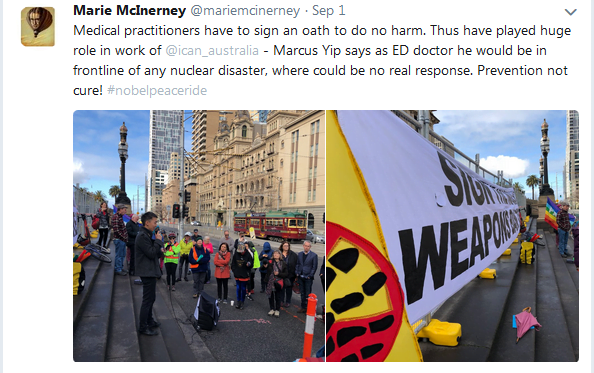 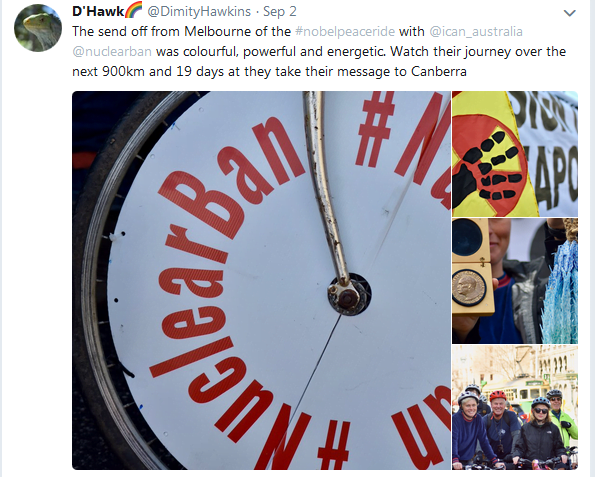 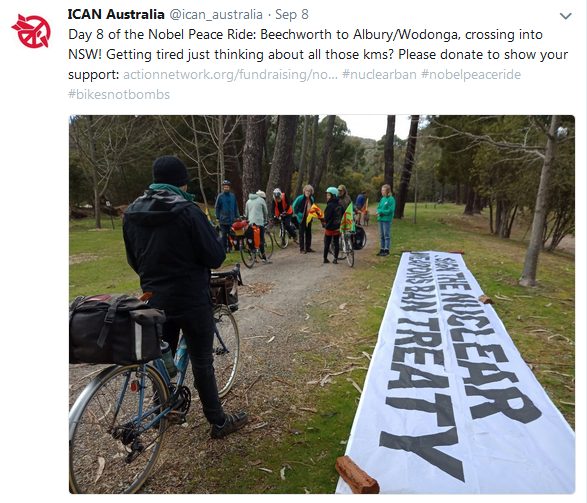 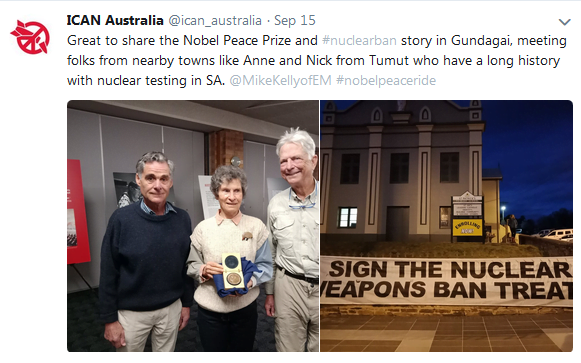 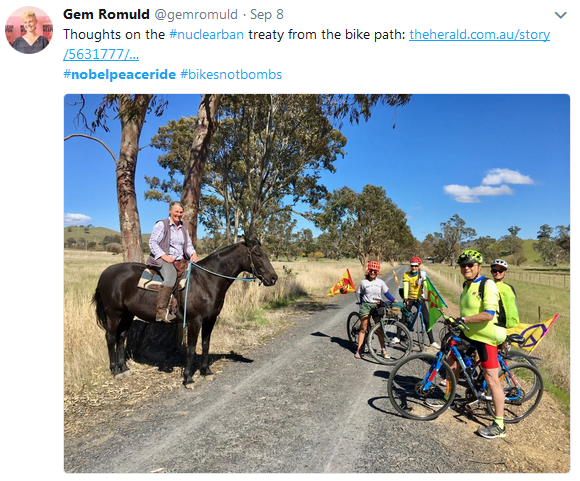 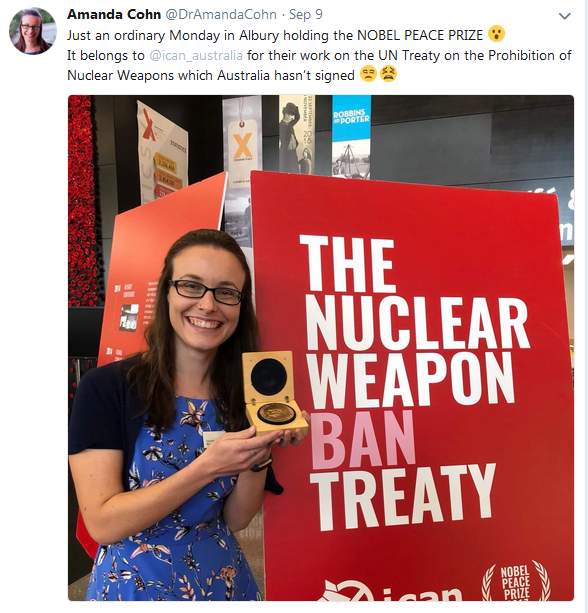 Talking to media and pollies 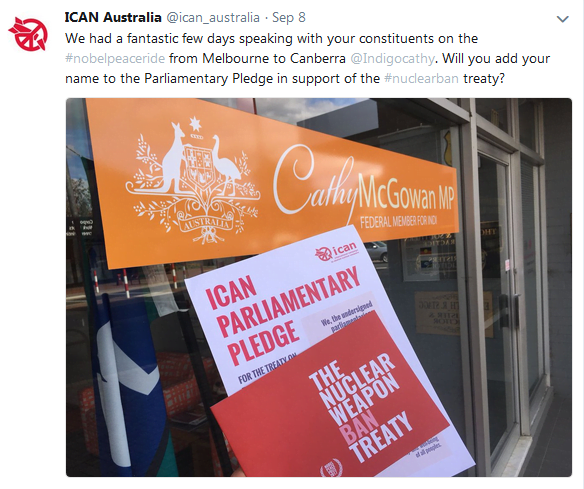 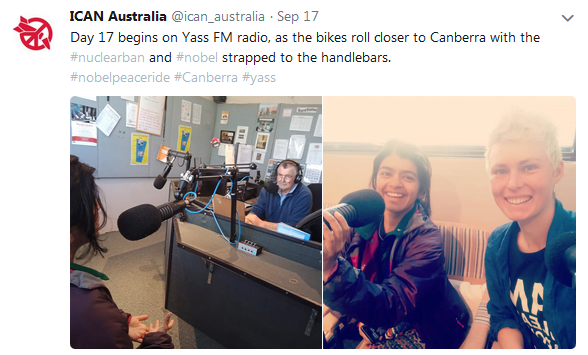 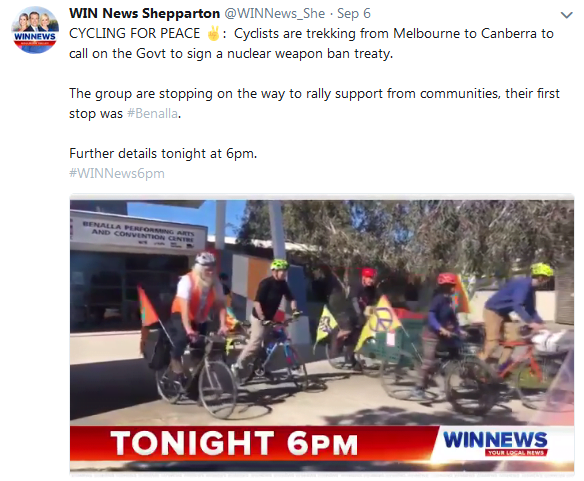 More to come from today’s events….