Home Croakey projects CroakeyEXPLORE On the road to mindfulness and meditation 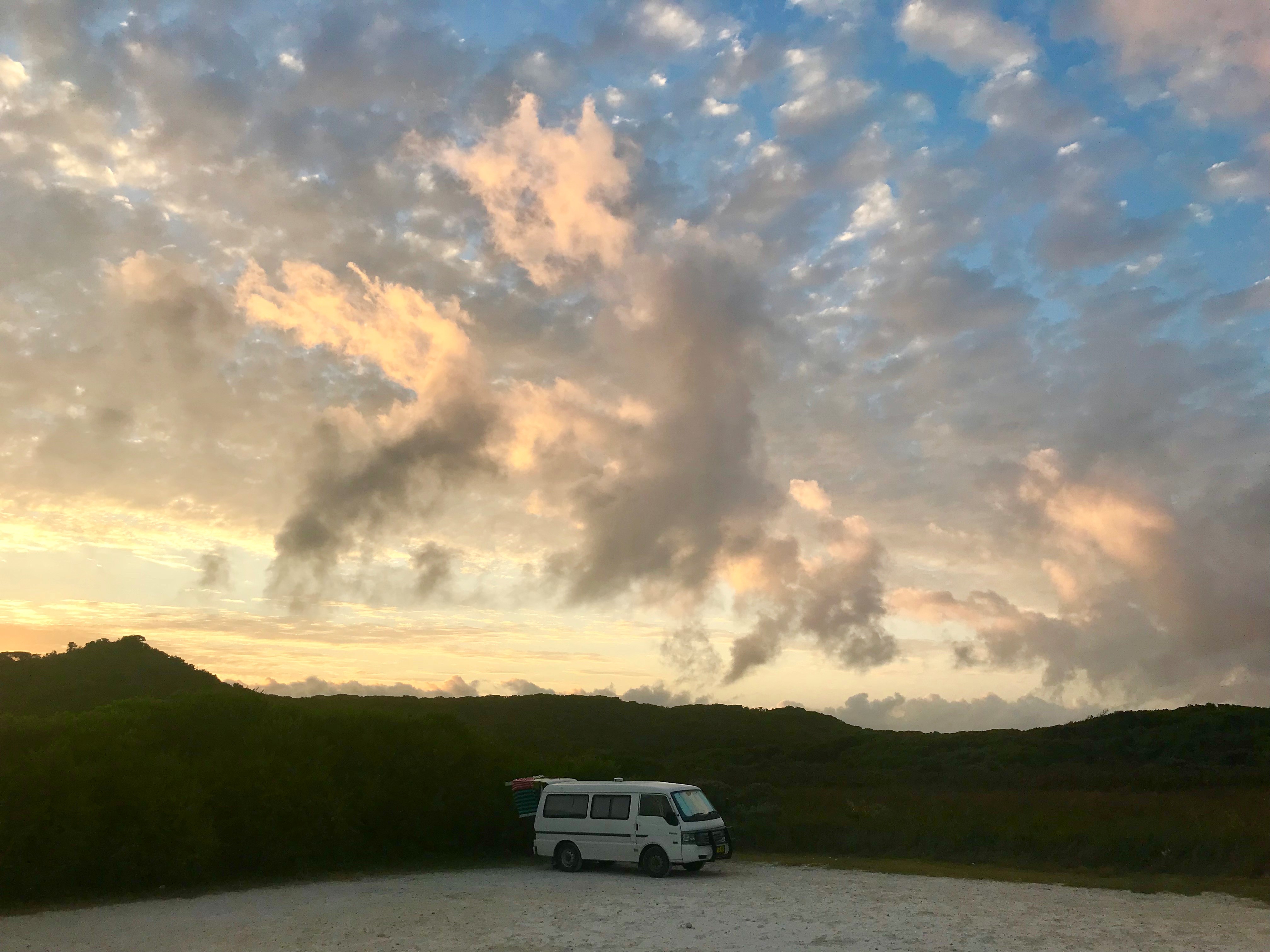 On the road to mindfulness and meditation

As part of our ongoing #CroakeyExplore series, researcher Isabella Saunders shares some meditative reflections from an extended roadtrip that brought some unexpected health benefits.

At the end of 2018 my partner and I decided to put our lives on hold, put all of our belongings into storage, and drive across Australia. We bought an old work van and fumbled our way through converting it into something liveable, then set off from Sydney, via Tasmania, and all the way to Perth.

We chose to do this trip because we realised we had seen more of the world than we’d seen of Australia.

I didn’t know anything about rural life, I’d never seen the desert, nor could I even begin to grapple with the absolute enormity of this country. When I thought of the country I was born in, I could only describe the small section of the east coast between Sydney and Melbourne that I had spent my life bouncing between, completely oblivious to the expanse of land that lay to the west.

Driving across Australia for two months was not something I saw myself doing at 26. Until recently, I had associated it with newly retired empty nesters keen to show off their shiny home-on-wheels or European backpackers beginning their year abroad in a beaten-up 1986 Toyota HiAce.

It also wasn’t until I was well into the routine of setting-up and packing-down camp that I realised the benefit that this daily repetition had on my wellbeing.

I expected a trip like this to be invigorating because of the lack of structure and the possibility for spontaneity. While a welcome change from my usual daily grind, it was the distinct lack of erraticism that settled my mind and allowed me to live simply and presently.

I thought that I might find enlightenment through some profound and complex thoughts that I would surely have while watching the landscape rushing past me for hours on end. Instead, what I often found was almost a complete lack of thought.

I would consider myself an over-thinker and a worrier at the best of times, so while I didn’t have any life-changing insight about the meaning of life or discover my own personal purpose, I did learn the importance of a meditative lack of thought and how this could benefit my mental health long-term.

I will describe a typical day. Waking up at 6am, my partner James and I would get up with the sun (as you tend to do when left without technology). James would get the cereal, fruit and coffee ready while I would convert the bed back to its daytime set-up. We’d sit and eat, drink our coffee, and then start packing up. If it was a warm and sunny day, we would set up the solar panels to recharge the battery while we went for a morning swim.

Then we’d start driving. Usually at this point we’d think about where we should spend the night – somewhere near a body of water, with a view, and sheltered from elements (sand dunes and Banksias are the perfect protection from coastal winds).

Before midday we would stop in a small town, buy some lunch and dinner supplies, then find a park to make and eat our sandwiches. After another couple of hours driving in the afternoon, we’d arrive at our campsite and unpack the solar panels again, and perhaps go for another swim or go fishing. We’d cook dinner, eat, convert the van back to a bed, and be asleep before 9pm.

I was surprised by how quickly we fell into this. The common belief is that a holiday should be a complete change from your regular, tedious life and an opportunity to break free from the metaphorical prison that is “routine”.

I found, however, that sinking into another routine was just what I needed to refresh my mind. It was this basic way of living, where major decisions were whether to buy Turkish bread or knot rolls, or whether to go to the beach now or later, that was more relaxing than any spontaneous whirlwind adventure could have been.

Crossing the Nullarbor was the epitome of this routine. The Nullarbor is an impressive expanse of land, somewhat daunting in its magnitude.

The time we spent driving toward the continually retreating horizon under a huge open sky felt like it flashed past in an instant but would also stand completely still – time seems to have no meaning in the Nullarbor. This is particularly true when driving though several time zones in a day (including a bizarre 340km stretch of land where you need to set your clocks back 45 minutes).

The Nullarbor is a place where for four days, everyone you see is focused on the same goal of making it to the other end – waking up, driving, going to sleep. Hundreds of people are simultaneously completing this daily routine without doing much else. However, there is something simply reassuring about the community of this. There are no obligations, no responsibilities and no commitments outside your own personal journey from A to B, and it’s the perfect place to merely exist.

The real benefit that this trip had on my mental health was unexpected.

Instead of a spontaneous, eccentric escapade where I found my life’s calling and the meaning of life, I found another routine. A simpler one grounded in basic human needs, and an opportunity to clear my mind from the usual clutter. This was particularly easy to do when immersed in the completely translucent water that surrounds the Eastern coast Tasmania or camped on the red soil of Western Australia that stretched until it met the sky.

Since arriving home, I have continued this habit through regular meditation, something I never seemed to find the time for before this trip. What I hadn’t realised at the time was that during these long days immersed in the land I was really practising the beginnings of mindfulness and meditation.

Modern neuroscience has uncovered significant evidence for the benefits of meditation, not only on mental health but also on physical health and cognitive ability. It has proven effects on the mind’s ability to control function and productivity and allows for a focus on the present moment.

Now that I am back at work, my days are once again filled with meetings, running errands, and frequent overthinking. Every day, however, I try to return to the mental stillness that I felt in the middle of the Nullarbor. By dedicating some time every day to enhance my mindfulness practice that I began in the outback, I have discovered more clarity of thought and greater control over my emotions.

An extended journey by car across Australia is something I would now recommend to anyone who feels mentally chaotic, foggy, or overwhelmed with existential thoughts. Being immersed in the country is the perfect way to kickstart a new routine of meditation.

• Isabella Saunders is a Research Assistant at the UNSW Centre for Social Impact and recently participated in a Croakey Professional Services writing workshop.

Read the previous articles in the #CroakeyExplore series.