Home Public health and population health marriage equality On World Mental Health Day, calls for the AMA and Parliament to take a stand on the plebiscite 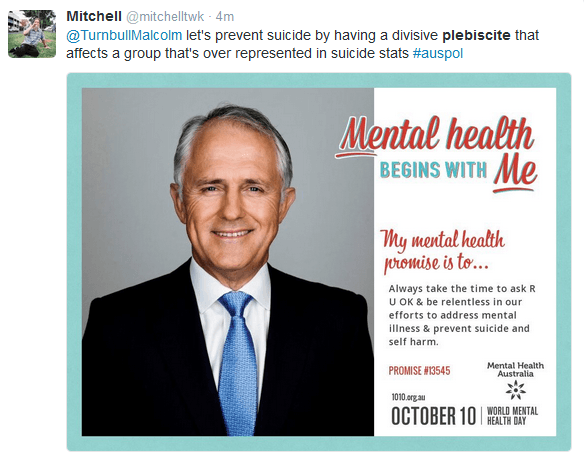 On World Mental Health Day, calls for the AMA and Parliament to take a stand on the plebiscite

Today is World Mental Health Day, being held globally with the theme: Dignity in mental health: psychological and mental health first aid for all.

It is, according to this statement from the Public Health Association of Australia, an important opportunity to advocate on health grounds for no plebiscite on same sex marriage.

As part of the PHAA annual conference in September,  more than 300 public health professionals called for the government to pass same sex marriage laws without a costly and damaging plebiscite and funnel the funds into areas that will benefit the community such as preventative health or education.

Many other health professionals have also spoken out about their concerns about the impact of a plebiscite, particularly on the health of young same sex attracted Australians. But missing in action on the issue is the Australian Medical Association, says health and community consultant Jason Rostant (on Twitter at @jrostant) in the article below, published originally at his blog and republished here with permission.

This follows comments by AMA President Dr Michael Gannon on ABC radio recently, that while discrimination is a health issue, he didn’t think it was his job to make personal commentary on the plebiscite. AAP reported him today as saying that marriage equality should come as soon as possible, but he had no view on which method should be used to change the law.

In her first speech to Parliament, New Labor Queensland MP Susan Lamb today talked also about the injustice that parents of same sex attracted young people feel about the lack of marriage equality and how discrimination against vulnerable minorities should never be up for national debate. She said:

“Those of us who are parents understand the innate instinct to fight against the unfair treatment of our children.”

“I carry a sense of disillusionment that our laws treat the love of one son inferior to that of his brothers. I stand in solidarity with my son and the LGBTI community.”

Click here also for a range of articles from the British Medical Journal on Psychological First Aid.

AMA: Missing in action on plebiscite

GPs are an important part of our health system. They are frequently the first port of call for people experiencing distress, depression, anxiety, and other mental health related concerns.

They are funded through the Medicate Benefits Schedule to support people to develop mental health plans and access psychiatric and psychological supports.

In an interview on Monday, AMA President Michael Gannon was asked about his views on the plebiscite.

While he acknowledged that ‘any form of discrimination is unhealthy’, and that ‘the matter needs to be resolved’, he also regards the plebiscite as ‘a matter for the Australian people’ and not one on which the AMA has (or should have) a strong position.

Gannon sees commentary on the plebiscite as a potential distraction from core AMA business and not part of his job description.

Gannon’s positioning is at very best, non-committal and unhelpful. In light of the active positioning by other health organisations, networks and peaks, it is also increasingly marginalised and deficient.

Concerns about the mental and physical health effects of a national plebiscite have been well documented, and have become one of several key reasons for many people wishing to avoid a popular vote.

Supporters of the plebiscite have accused opponents of playing the “suicide card” at the same time they have accused same-sex families of abusing their children, and compared marriage equality advocates to Nazis and ISIS.

A day after Gannon made his comments on Sky, community concerns were validated when it emerged that Lifeline had added a new plebiscite category to its national call register. “Main reason” categories are added when there is an increase in the number of calls being received on a topic.

Responding to the tenor of the debate and emerging evidence of its harms, a growing number of health professionals have publicly stated their opposition to the plebiscite in recent weeks.

On the same day Lifeline were updating their databases, prominent youth mental health expert Pat McGorry outlined the suicide and other mental health risks associated with discrimination generally, and a plebiscite in particular. He called for funding to improve LGBTIQ mental health and for the plebiscite to be scrapped.

On the same day,  Mental Health Australia, the peak body representing and promoting the interests of the Australian mental health sector, issued a public statement calling on Parliament to ditch the plebiscite and deliver equality through a parliamentary vote.

In late September the Public Health Association of Australia (PHAA) and the Northern Territory Chronic Diseases Network passed a unanimous resolution at their joint annual conference calling on Parliament to can the plebiscite.

The PHAA also cited concerns the plebiscite would incite community conflict, and in an era of cuts to prevention funding, offered a range of alternatives to how the $160 million could be better spent. (Since the PHAA conference, the cost of the plebiscite has risen to $200m).

So what’s with the Australian Medical Association?

Immediate past President Brian Owler also acknowledges the harm caused by discrimination and thinks a plebiscite is unnecessary.

The current President’s position is altogether different. It seems clear that his appointment to the top job was part of an attempt to build closer ties with the Liberal government. Indeed Gannon himself is quoted as saying that the AMA had become ‘too lefty’ under previous leadership and ‘needed to get back to core business’.

It is hard to understand how a response to the plebiscite debate does not fall within the scope of the AMA’s core business.

From a health equity point of view, LGBTIQ Australians have some of the poorest health outcomes in the country, without having to endure a plebiscite.

As the plebiscite debate has heated up, it is likely that LGBTIQ people experiencing distress have presented in greater numbers and with greater frequency to GP practices around the country. With all of Christian Porter’s interest in big data, it would be interesting to track the MBS to identify any plebiscite-related trends.

Clearly, avoiding the additional harms caused by a possible future plebiscite is a matter of interest for public health, as the PHAA and others clearly understand.

The AMA also has an education and leadership role in the community and across its membership. Recent US research has shown the political views held by GPs also affect their treatment decisions on politicized issues. The AMA has a clear role to increase understanding, accessibility and quality of care for groups experiencing poorer health outcomes.

The AMA wields significant influence and power. It has a medical and ethical obligation to use this influence by making an unequivocal statement on the plebiscite.

Failure to do so risks its complicit contribution to poorer health outcomes for a vulnerable portion of the community. It also risks the AMA becoming more isolated and marginal in this important social debate.

*ACON has produced a guide for health services supporting LGBTI people during the marriage equality debate available here, and Croakey has reported here.