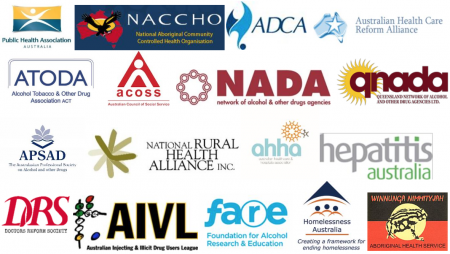 A coalition of 17 peak and non-government organisations from the health and community sectors is calling on the Australian Government to scrap plans to cut nearly $800 million in funding to key health initiatives over the next four financial years. The foreshadowed cuts would drastically reduce the capacity of non-government organisations and peak bodies to deliver services across the country and to provide advice and support for reform in health.

“It has been revealed in the latest round of Senate Estimates that $596.2M is to be cut from the Health Flexible Funds over the next four financial years. This is on top of cuts totalling $197.1M announced in last year’s Budget – making a total of over $793M. There is still no clarity in relation to how these savings are to be achieved, with most existing funding contracts for NGOs set to expire either at the end of 2015 or on 30 June 2016. Among the 14 Flexible Funds apparently to be affected are those supporting the provision of essential services in rural, regional and remote Australia; working to Close the Gap in health outcomes for Indigenous Australians; managing vital responses to communicable diseases; and delivering substance use treatment services around the country. Obviously it’s of great concern to all the services and organisations potentially affected,” explained Melanie Walker, Acting Chief Executive Officer (CEO) of the Public Health Association of Australia (PHAA).

“Any cuts to the Health Flexible Funds will just put more barriers in place for Aboriginal people to access essential health programs and services particularly in rural and remote Australia. While we welcome the Ministers announcement on quarantining the specific Aboriginal and Torres Strait Islander Chronic Disease Fund many of our organisations receive project funding from the other Funds, so efforts to Close the Gap in health outcomes and life expectancy for Indigenous Australians will still be severely hampered if the cuts go ahead,” said Lisa Briggs, CEO of the National Aboriginal Community Controlled Health Organisation (NACCHO).

“Alcohol and other drug services would be severely impacted by any funding cuts. The Government has recognised the importance of treatment and harm reduction services in the context of establishing the National Ice Taskforce focusing on methamphetamine use, which is impacting particularly on rural and regional communities throughout

Australia. To think that funding for these vital services is currently under threat beggars belief,” said Rebecca MacBean, spokesperson for the Alcohol and other Drugs Council of Australia (ADCA). Professor Ian Webster, Patron of ADCA, reiterated the importance of funding for alcohol and other drug treatment services.

“Cuts to flexible funding are a significant destabilising force in the health sector, both at organisational level where there will be an impact on the viability of many not-for-profit health services, as well as on the capacity of the new Primary Health Networks; and at individual level, particularly for many of our most vulnerable people,” said Alison Verhoeven, Chief Executive, Australian Healthcare and Hospitals Association.

“The core work of Peak National Organisations, such as Hepatitis Australia funded under the Communicable Disease Prevention and Service Improvement Fund, is absolutely vital to the longstanding and world renowned partnership response to Blood Borne Viruses and Sexually Transmissible Infections in Australia. Without ongoing core funding our ability to meet the needs of the affected communities and assist the government to achieve the targets they set in the National Strategies will be critically impaired,” said Helen Tyrrell, CEO, Hepatitis Australia.

“The Health Flexible Funds provide funding for a range of essential organisations, services and programs for some of the most marginalised groups in our community – groups the government would otherwise be unable to reach resulting in increased levels of preventable infections such as HIV and hepatitis C and other complex and chronic conditions within the Australian community,” said Annie Madden, Executive Officer, Australian Injecting & Illicit Drug Users League (AIVL).

“Our organisations stand together in calling on the Australian Government to scrap its plans to cut $800M in funding from the Health Flexible Funds over the next four years. If the cuts go ahead it could decimate NGO sector responses to many of the key challenges in public health and leave Australian families and communities without the support they need,” said Tim Woodruff, Deputy Chair, Australian Health Care Reform Alliance (AHCRA).