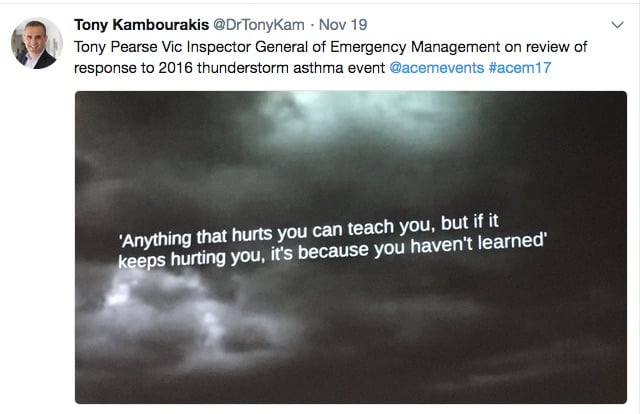 An emergency medicine conference in Sydney recently heard that disasters, conflicts and other public health emergencies are presenting growing threats to global health security, as reported at Croakey.

The Australasian College for Emergency Medicine (ACEM) conference also heard that Australian emergency response and health systems are woefully unprepared to cope with natural disasters and other public health emergencies, as Amy Coopes reports below for the Croakey Conference News Service.

A flurry of natural disasters and public health crises had revealed a woeful lack of preparedness in Australia’s emergency response and health systems, the ACEM conference was told.

Presenters reviewed some of the lessons from events ranging from Black Saturday and the Queensland floods to last year’s Victoria thunderstorm asthma event.

Dr Kavita Varshney, from Sydney’s Westmead Hospital, presented a study showing an exponential increase in disasters worldwide, with Australia seeing some of the worst cataclysms on record in the past decade, exposing vast deficiencies its preparedness.

Apart from the 1996 Port Arthur massacre, which had been met with a swift response by the Federal Government, Varshney said her study found that the implementation of reforms recommended by disaster reviews tended to be delayed. 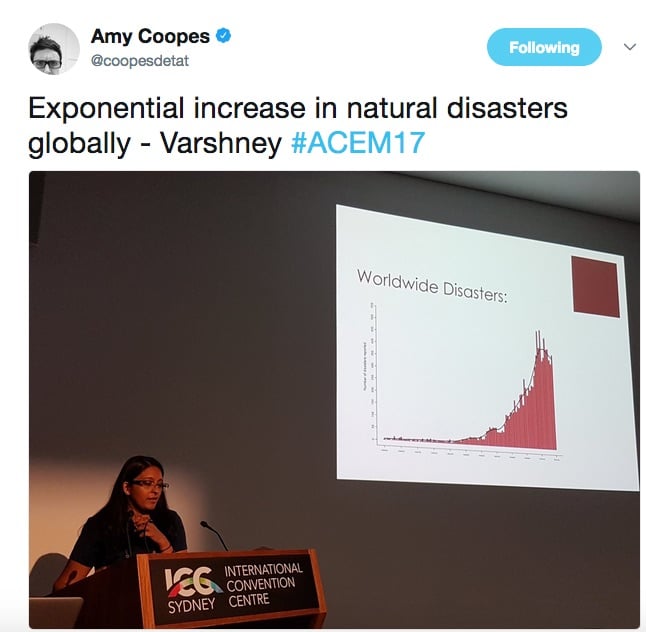 Paul Barnes from the Australian Strategic Policy Institute (ASPI) told the conference health care responses were critical to the national security effort but there were dots – local, state and federal – that had not yet been joined.

Preparedness had not been tested at a state, intrastate and national coordination level, particularly to a scenario involving an improvised explosive device, said Barnes, arguing that capability gaps could not be seen without activating the “whole of service chain”.

Barnes said Australia did not run enough realistic real-time simulations of crisis response, pointing to the 2016 Exercise Sydney emergency response drill testing readiness for a mass casualty event in the city when a jumbo jet carrying 500 people went down in the harbour.

There was a “certain degree of non-realism involved” said Barnes of the exercise, which ASPI reviewed for stakeholders.

For example, participants reported fire-fighters carrying five or six cardboard people under each arm, and it was held on the weekend, meaning CBD traffic flows were unrealistic. Despite it being a jumbo jet scenario, no search and rescue capacity of the harbour was tested, he added.

Looking at health specifically, he said it was important to acknowledge that staff were often the targets of secondary devices in so-called ‘hot zones’, and that health facilities were no longer sanctuaries but targets, with a need to plan accordingly, especially in the event of an ongoing attack.

There was also an important role for public health systems to go into “emergency mode” to engage and reassure the community in these scenarios, he added.

Barnes said it was imperative that COAG look at emergency medical responses to major crises and the broader recovery cycle.

He noted that the overhaul of Home Affairs into a super portfolio led by Peter Dutton meant it was presently uncertain how health fitted into the government’s thinking on national security.

He did say there was appetite in the Federal Government to address this issue, it was just a matter of lobbying the right officials. 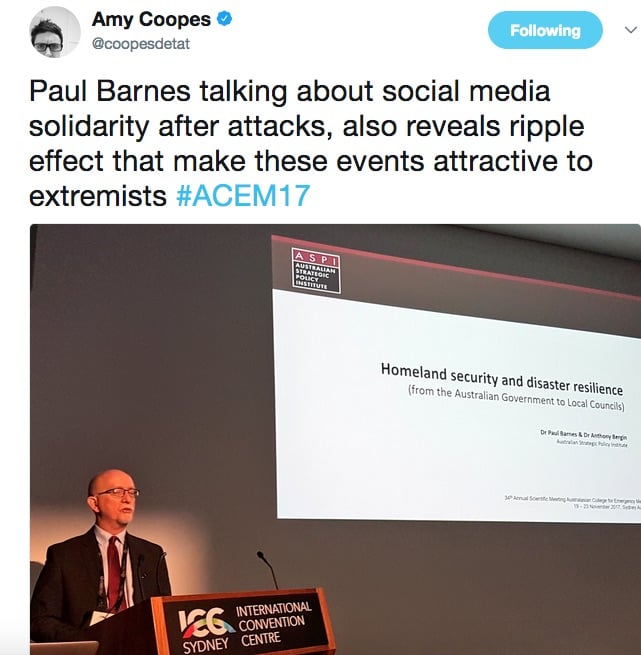 Simon Craig, from Austin Health, surveyed 357 staff working that night and presented his findings to the conference.

More than half (247) said they felt teams did well despite the circumstances, but a third (107) reported running out or needing more medication, and a quarter (92) felt a code brown should have been called.

Staff reported wanting to stay back but being denied overtime by hospital executives, nurses suffering asthma attacks stopping for puffer breaks in the corridors between patients and a lack of timely and effective communications between the health department, hospitals and paramedics.

Others said electronic medical record-keeping became laborious and time-consuming, as did the normal triage procedures. Equipment and supplies, workload management and distribution, and space in the ED were identified as institutional issues.

Victorian Inspector-General of Emergency Management Tony Pearce – whose position was created in response to the Black Saturday fires and Victorian floods – reviewed the event, and the Andrews government announced the rollout of a real-time monitoring system to track emergency demand and fast-track responses in when a crisis unfolds, in response to his report.

Shane Curran, from Wagga Wagga Base Hospital, shared the NSW regional centre’s long experience with thunderstorm asthma, and lessons learned stretching back to an event in 1996 where 397 patients presented in a single night (40 patients being the norm).

The hospital now had oxygen outlets in the emergency waiting room and an ‘asthma-only’ section of the ED for surges, as well as contingency orders for equipment.

They had developed a special triage protocol and the ED would activate its disaster management plan, if put on alert by Public Health during dangerous conditions, once two or three people presented with shortness of breath. 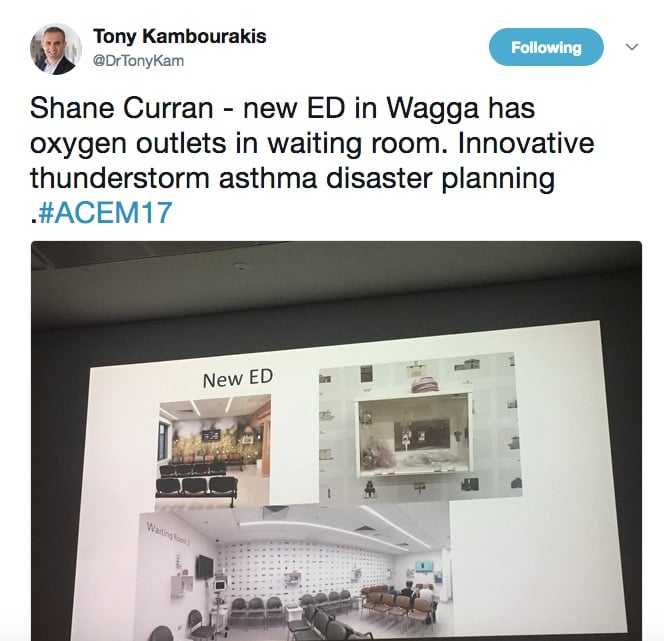 Technological advances also meant that, instead of looking out the window to see if hay-cutters were wearing masks, Charles Sturt University had developed an algorithm to predict dangerous conditions based on pollen counts and meteorological data.

They even provided an opt-in alert service to community members vulnerable to the condition, Curran said.

“Thunderstorm asthma’s not new, and we think that these events are predictable in our district,” he said. 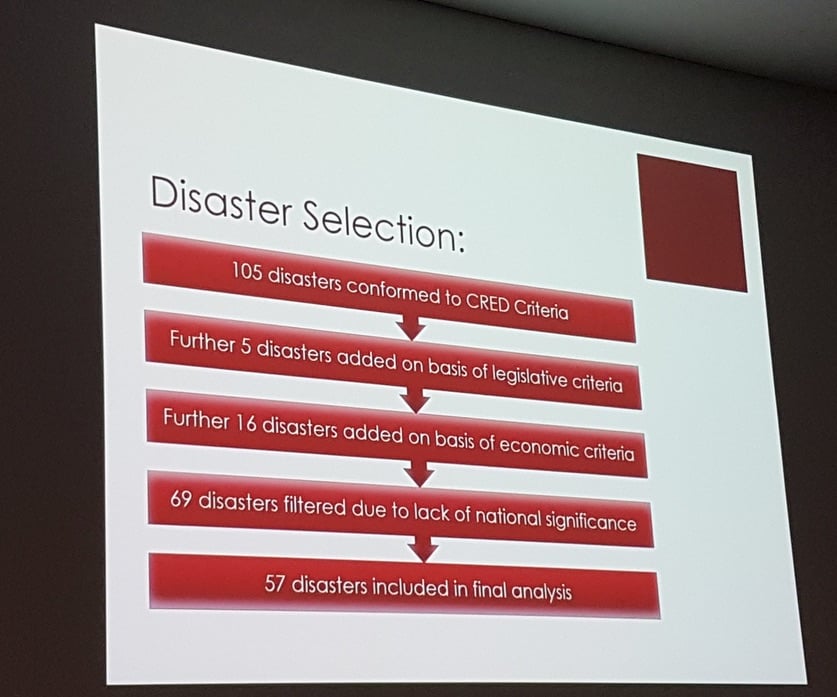 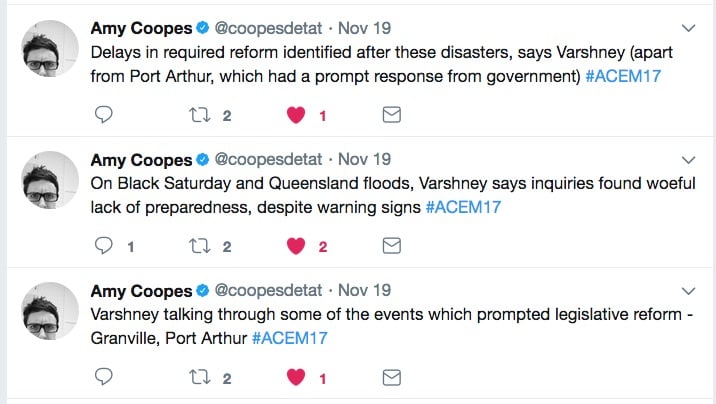 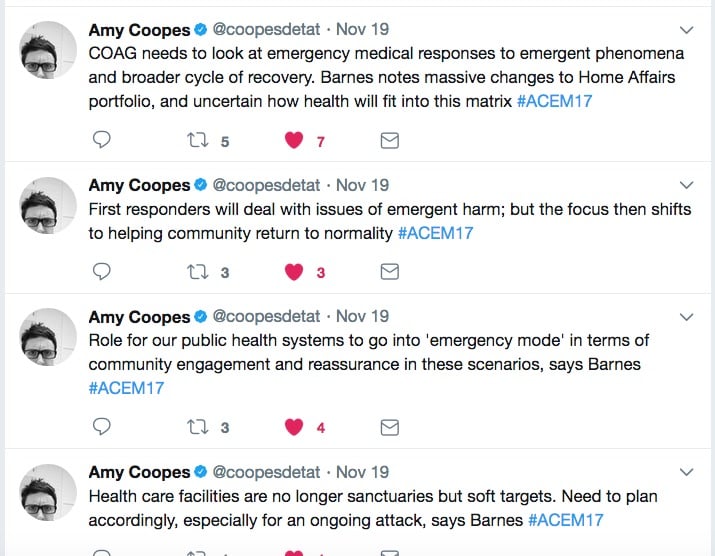 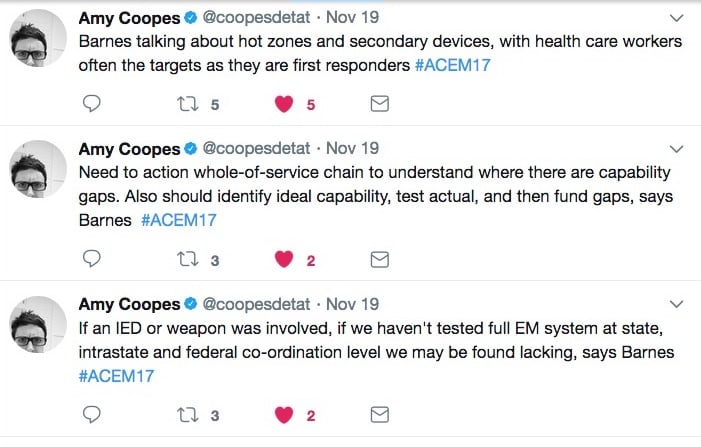 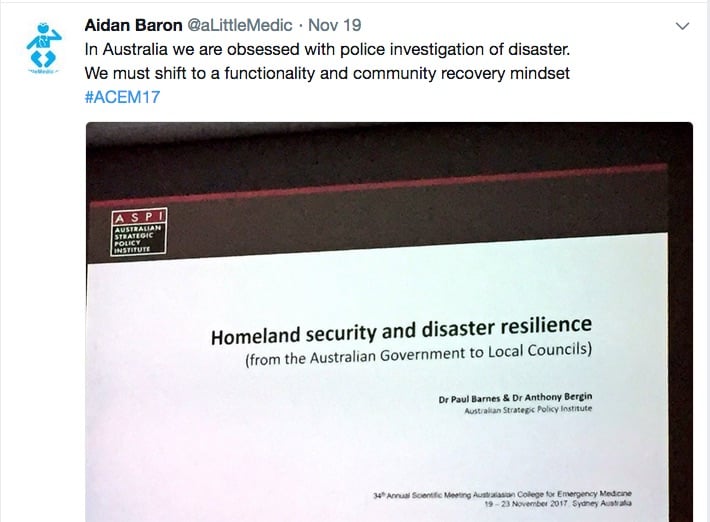 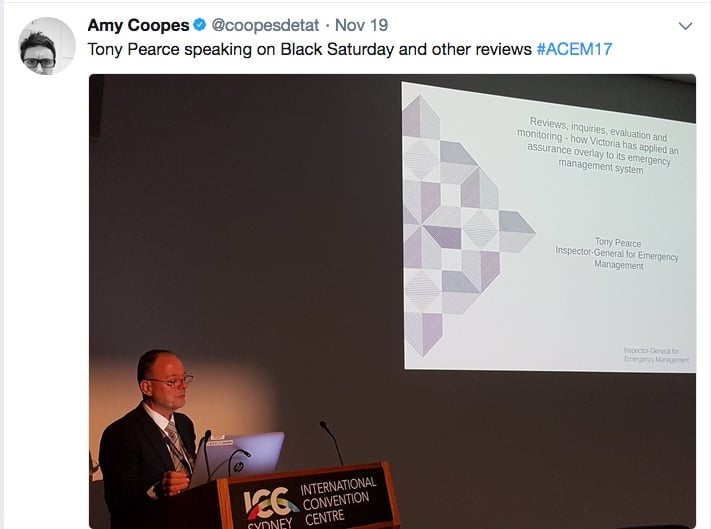 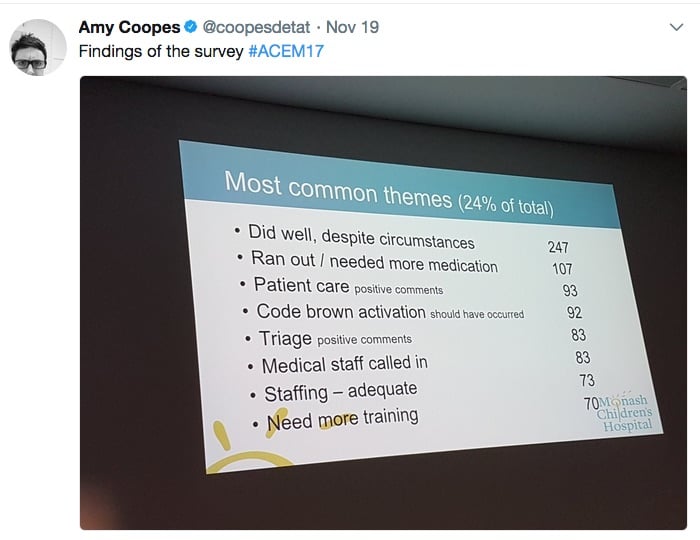 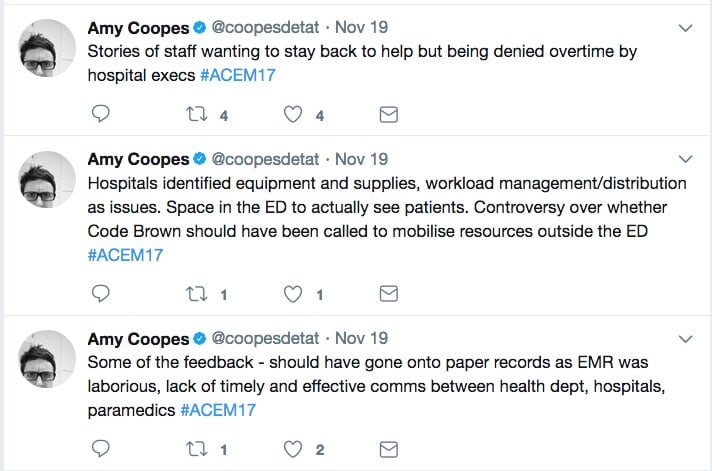 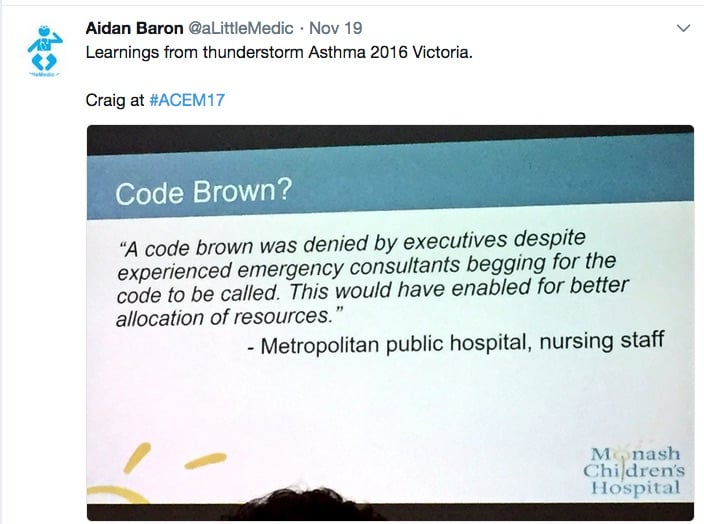 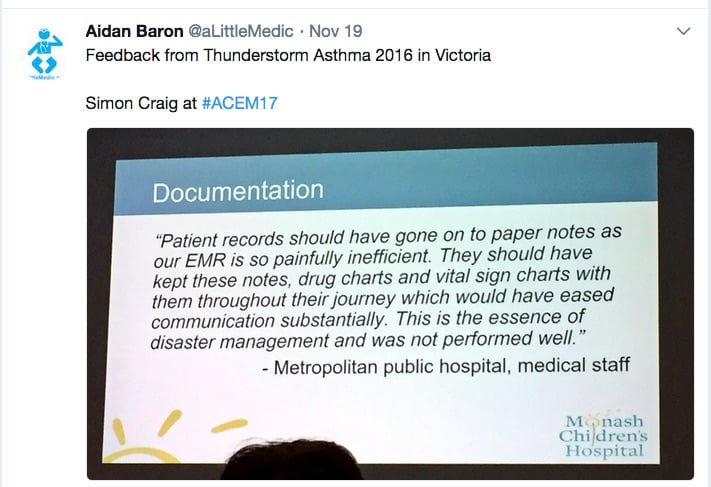 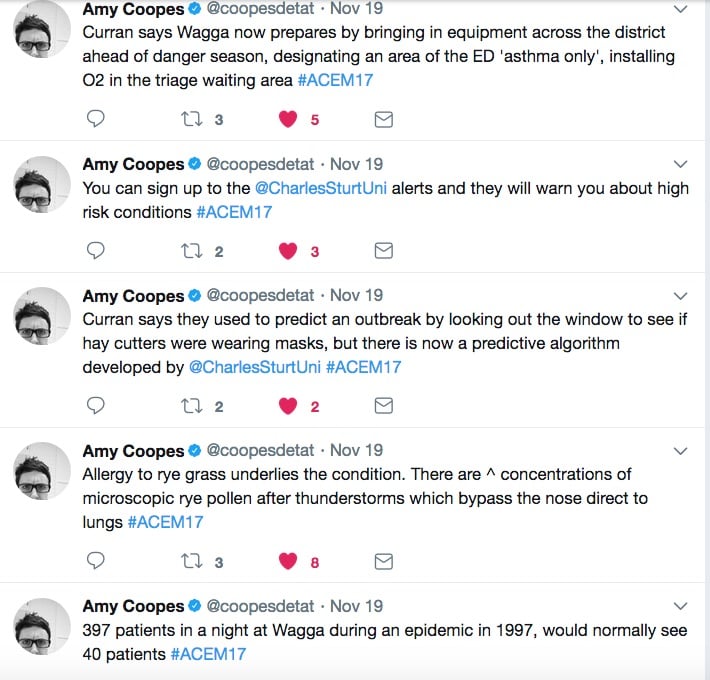 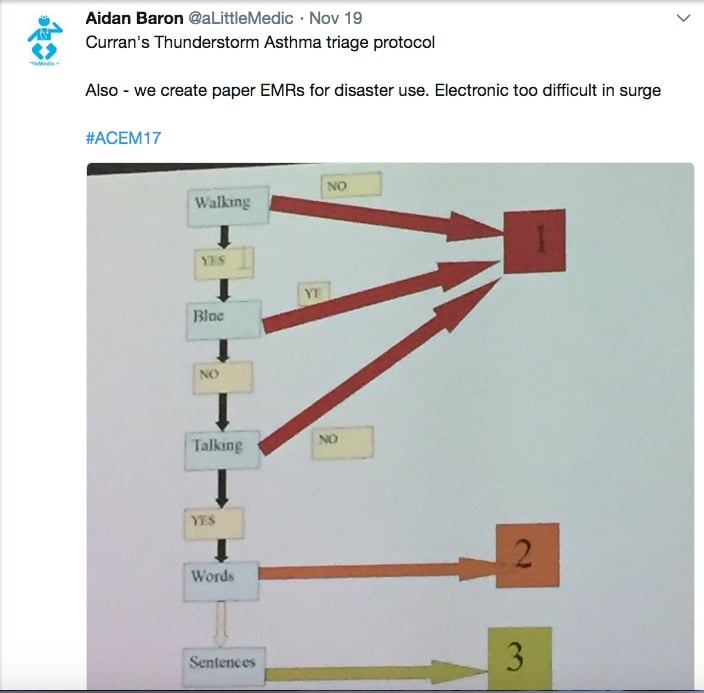 Hearing from the audience

Bookmark this link to follow our ongoing coverage from #ACEM17.