Home Croakey projects #CoveringClimateNow “Our village has disappeared”: Four critical challenges to the health sector from the Pacific 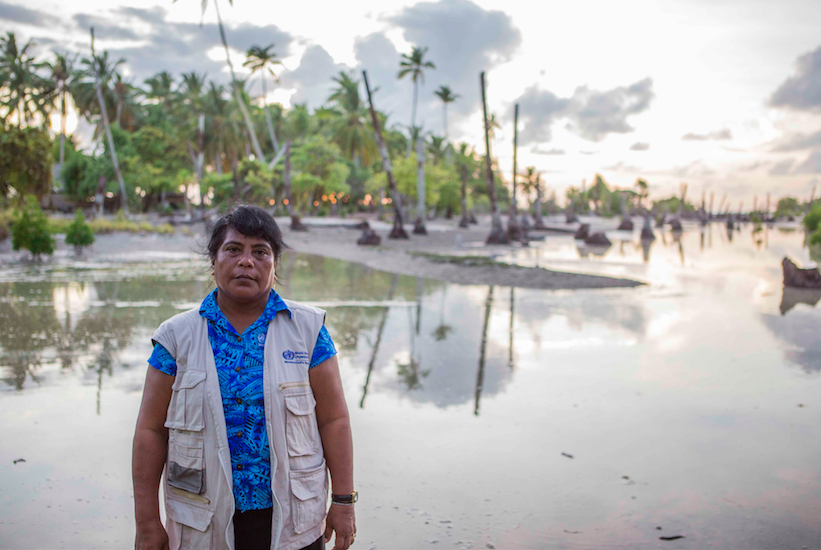 Akineti, from the WHO Kiribati Country Liaison Office, near an area previously cultivated for babai (giant taro), banana and coconuts by the small island community of Abaiang. Credit: WHO/W.Seal

“Our village has disappeared”: Four critical challenges to the health sector from the Pacific

Introduction by Croakey: Fiji’s Prime Minister Honourable Frank Bainimarama this week made his first ever official visit to Australia, in the lead up to the Climate Action Summit at the United Nations General Assembly in New York on 23 September.

He signalled that climate change would be “at the top of the agenda” of his meeting with Prime Minister Scott Morrison, which followed disappointment and resentment at the recent Pacific Island Forum over Australia’s continuing refusal to take a stronger stand on climate change, which is already having a devastating impact on life and health in the Pacific.

In the article below, Dr Takeshi Kasai, the World Health Organization (WHO) Regional Director for the Western Pacific, and Dr Corinne Capuano, the WHO Representative to the South Pacific, outline the toll being experienced in the region, at the frontline of climate change.

They also set out four ways that the health sector can and must act to do its part on climate health in the Pacific.

The article is published as part of our participation in the Covering Climate Now initiative, an unprecedented global media collaboration that is putting the spotlight on the climate crisis ahead of next week’s UN Summit.

Earlier this year, we travelled to Kiribati – a country in the middle of the Pacific Ocean, made up of around 30 atolls and islands, spread over 3.5 million square kilometres, and home to just over 100,000 people.

During the visit we travelled to a remote outer atoll, Abaiang – two hours boat ride from the main Tarawa islands. As we travelled across Abaiang, with a high point just three meters above sea level, we saw firsthand traditional lands that are now uninhabitable due to rising seas and increasingly severe storms.

As we passed one particular spot, one of our local WHO staff, Akineti, suddenly became quiet.

When asked what was wrong, Akineti pointed to a spot towards the ocean, in the distance – and said:

That used to be my village. It is where I grew up and where my parents’ families lived, for generations. But it is not there anymore. Our village has disappeared.”

For Akineti and her family, for the people of Kiribati, and for people in countries across the Pacific, climate change is not an abstract scientific or political issue. Extreme weather events are more common. Rising sea levels are eroding whole islands and atolls, and with them the only life many people have ever known.

The World Health Organization’s Western Pacific Region spans 37 countries and territories, half of which are small island countries like Kiribati. These countries have some of the smallest carbon footprints of any country on earth, yet they bear the greatest burden from climate change.

Beyond the immediate impacts from sea levels and storms are many subtler, more insidious threats to health. Climate change is increasing the risk of waterborne and foodborne diseases, and malnutrition due to food insecurity caused by changes in rainfall patterns, drought and rising sea levels. It contributes to disease-carrying mosquitoes spreading to new locations, and psychosocial trauma caused by extreme weather events.

The potential for harm is now so alarming that last month a meeting of parliamentarians from 20 Asian and Pacific nations declared the climate crisis “one of the most critical threats to health” in our region.

What can/must the health sector do?

So what can those of us in the health sector – public health officials, ministries of health, medical schools, doctors, nurses and other health workers – do to address the health impacts of climate change?

First, we need to join hands with colleagues in government, industry and the donor community to support low-lying island and coastal communities facing the most immediate threat. Such assistance might involve investments in infrastructure and other measures to mitigate and adapt to rising sea levels. We also need to ensure that our health clinics and hospitals are green, safe and resilient – and able to withstand the onslaught of extreme weather, to ensure they are able to care for their communities in times of extreme need.

Secondly, we need to do a better job of making political arguments for action on the health impact of climate change. In 2015, when Member States of the United Nations endorsed the Sustainable Development Goals, they included “good health and well-being” as one of those goals. At long last, there was global recognition of the critical link between health and development: a healthy population translates into a more productive workforce and lower overall health costs. We need to ensure that the case for addressing the health impacts of climate change is part of all of these discussions.

Thirdly, climate change is a complex challenge – with health too often excluded from discussions. We must change that mindset and ensure that national action plans on climate change include action to mitigate the impact of climate change on health. As part of that effort, WHO is working with parliamentarians on this and a variety of other health-related issues.

Many WHO Member States worry that time for action is running out – both on the health threats we already see from climate change, and for future generations.

At regional level, Member States in the Western Pacific Region have said in no uncertain terms that a business-as-usual approach to climate and health will not be good enough. Fortunately, the Pacific enjoys a long tradition of appreciation of the fundamental link between health, the environment, development and sustainability, going back to 1995 when Pacific health ministers endorsed the Yanuca Declaration, which encapsulated many of the principles now at the heart of the Sustainable Development Goals. This well-established approach to health and the environment is helping to inform the approaches we are now taking.

Our goal is simple: we want to ensure countries and communities in the Western Pacific are well prepared to face a changing climate and environment. To reach that goal we must lead on climate change mitigation and adaptation – and on engaging with other sectors – to ensure that health is at the centre of every climate change discussion. People like Akineti and her family are counting on us, and we mustn’t let them down.

• If you value Croakey’s coverage of climate and health, please consider supporting our Patreon fundraising campaign, so we can provide regular, in-depth coverage of the health impacts of climate change, taking a local, national and global approach.

All funds raised will go to a dedicated fund to pay writers and editors to put a sustained focus on the health impacts of climate change. Please help us to produce stories that will inform the health sector, policy makers, communities, families and others about how best to respond to this public health crisis.