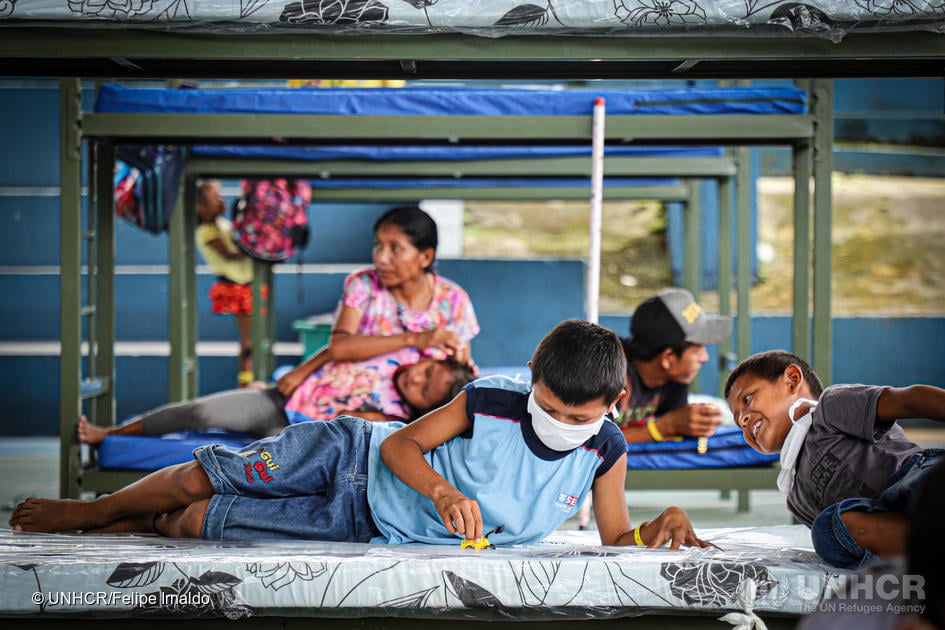 Venezuelan Indigenous Warao refugees and migrants are relocated to a safe space in Manaus amid the COVID-19 pandemic. Photograph supplied by UNHCR

Introduction by Croakey: The coronavirus pandemic – and the resulting global recession – is going to have a devastating and destabilising effect on the world’s poorest countries, a senior United Nations official warned this week.

Mark Lowcock, the Under-Secretary-General for Humanitarian Affairs and Emergency Relief Coordinator, said the cost to protect these countries has been estimated at about $US90 billion – a massive sum, but notably just one percent of the global stimulus package the world’s richest countries have put in place to save the global economy so far.

Lowcock called on wealthy countries and international financial institutions to fundamentally shift their approach to aid and debt, saying:

This cannot be business as usual. Extraordinary measures are needed, reflecting the extraordinary problem we face.”

His appeal comes amid fears that wealthy nations like Australia will do the opposite, battening down their hatches, having spent billions getting themselves through the crisis.

That will only further expose risks for more than 75 million people displaced across the globe, who, as Marie McInerney reports below, are at risk from the pandemic and also fear their bids for asylum will be blocked by countries refusing to unwind border and other restrictions.

Last month a boatload of around 400 Rohingya asylum seekers – men, women and children – were pulled from the water in the Bay of Bengal off Bangladesh.

Reported to be starving, emaciated and traumatised, they had spent weeks adrift, about 30 of their number dying in the ordeal, while Malaysia refused to let their fishing trawler land out of fear they might import COVID-19 into the country.

The boat had set out from the the world’s largest refugee camp, at Cox’s Bazaar in Bangladesh, after previously fleeing Myanmar, where the United Nations says the Rohingya are the most persecuted minority in the world.

The survivors described having been “unable to move, squatting in rain and scorching sun until, as food and water ran out, they began to die of starvation, thirst, and beatings, their bodies tossed overboard”, according to a report by Reuters news agency.

This terrible story was highlighted in a warning delivered recently by former Australian Human Rights Commissioner Gillian Triggs, who is now Assistant High Commissioner at the United Nations Refugee Agency (UNHCR). The agency has had to suspend its resettlement services indefinitely due to the pandemic.

Triggs told a webinar hosted by the Columbia Law School Human Rights and others that we often hear the coronavirus “does not discriminate” in its victims.

“That is true but the impact of the virus is discriminatory, disproportionally affecting the poorest and most vulnerable people in the world”, not just on health but also human rights grounds, she said.

Improbably, there is still yet to be a formal report of a coronavirus outbreak in a refugee community anywhere in the world, although that could be due to a lack of testing and data,  with reports of symptoms spreading, for example, through camps in Calais and as the pandemic begins to take its toll in African, Oceanian and Latin American countries.

But with 122 refugee-hosting countries reporting local transmission of COVID-19, “we know it’s a case of when rather than if an outbreak occurs,” Naomi Steer, National Director of Australia for UNHCR, told Croakey.

At high risk are an estimated 75 million refugees or displaced people living in crowded, unhygienic conditions in refugee camps or settlements in nations with extremely fragile health systems that, the UNHCR warns, “could be rapidly overwhelmed if the virus gains a foothold”.

They mostly live with overcrowding, poor nutrition, and inadequate provision of water, sanitation and hygiene that present enormous challenges for pandemic prevention. Many are also becoming destitute as casual labour and other jobs vanish overnight.

Oxfam Australia tells a graphic story in this list of concerns:

The knock-on effect of the pandemic is profound, said Ann Burton, Chief of UNHCR’s Public Health Section, in a recent webinar hosted by Australia for UNHCR.

Some of her examples include Liberia, where the main weekly market for refugees has had to close, depriving them of both a main source of income and food supply.

In Syria, Burton said 450 community centres, child-friendly spaces and Women and Girls Safe Spaces providing specialised protection activities to 1.2 million people have been closed  due to pandemic restrictions, amid global concerns that women and children are at increasing threat of sexual and physical violence and trafficking,

Many agency and other health services are struggling to access supplies, including personal protective equipment (PPE) and medicines, Burton said. Some countries that manufacture them are now not allowing their export. Even if agencies can procure such supplies, getting them into the field is a major challenge due to reductions in flights and border closures.

Burton says the UNHCR is also seeing reports of rising xenophobia and resentment that pose other risks to refugees and displaced populations, as was seen with the Rohingya.

She told the webinar:

As we so often see in crisis situations, it’s often foreigners who are blamed, who are scapegoated, and this is also fuelled by poor quality journalism and misinformation.

So while COVID19 is primarily a public health crisis, the secondary effects will have a deep and long-lasting impact.”

Leave no one behind

Similar concerns, including for refugees and asylum seekers living in wealthier nations, have prompted the recent Lancet Migration Global Statement on COVID-19, titled Leaving no one behind in the COVID-19 Pandemic: a call for urgent global action to include migrants in the Covid-19 response. 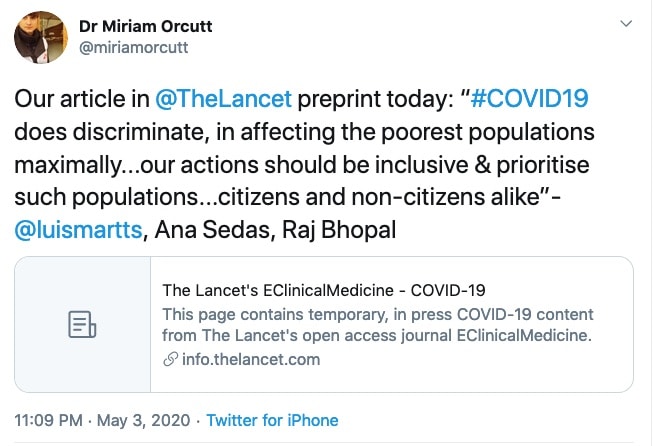 The statement warns of the multiple barriers to accessing healthcare, including legal status, discrimination and xenophobia, health systems and policies that are not inclusive of migrants and refugees, fear and mistrust of healthcare authorities or government providers. As well, income can be so precarious that some have “no choice but to keep working”.

Some of the statement’s calls apply to Australia, including for the immediate suspension of laws that limit migrants and refugee access to health care services and economic support programs and for the move to safety of migrants and refugees held in overcrowded detention and those at risk under Australia’s responsibility in Nauru and Papua New Guinea.

Of 167 countries to date that have fully or partially closed their borders to contain the spread of the novel coronavirus, Gillian Triggs said 57 have “made no exception whatsoever” for access for asylum seekers.

While some countries have been “assiduous” in protecting refugee rights, many have suspended the right to seek asylum or sought to send asylum seekers back home or to third countries where their safety is not assured.

Triggs defended the rights of countries to temporarily close their borders to protect public health, but those measures must be “non-discriminatory, necessary and proportionate”.

However, fundamental norms of refugee and human rights law are now at risk, she has written.

Not only have national responses to COVID-19 led to the denial of refugee rights, but they have also resulted in the unnecessary and disproportionate use of immigration detention, a dramatic rise in sexual violence, discriminatory restrictions on access to health and social services, the loss of livelihoods, and closure of ports.

Triggs’ longer-term concern is that restrictions “with many, many consequences for asylum rights and prohibition of non-refoulement” may be justified as emergency measures but risk being “entrenched or ‘baked in’ once the coronavirus crisis passes”.

There may be a determination by some countries to continue to maintain those regressive policies so we need to be vigilant in upholding the rights of refugees to protection.”

Leading public health researchers are also calling for governments and international institutions to attend to the “unjust disparities” that COVID-19 is exposing and causing.

A paper in press with The Lancet, by Luis Alberto, Martinez Juarez, Ana Cristina Sedas, Miriam Orcutt and Raj Bhopal, outlines the pandemic’s risks to marginalised populations living with a low-income, or in poverty in high-income countries.

Those include shorter life expectancy, and “more surprisingly” a high and rapidly rising burden of chronic respiratory disorders, cardiovascular diseases and diabetes mellitus, three of the most common co-morbidities found to increase COVID-19 mortality.

The authors warn that the world continues to neglect critical lessons from Public Health Emergencies of International Concern (PHEIC) such as the Influenza H1N1 pandemic in 2009, the Ebola outbreak in West-Africa in 2014, and the Zika 2015 pandemic.

The only way of successfully mitigating such outbreaks is by “leaving no one behind”.

“The success of our global response to this pandemic will rely on the responses of the weakest health systems,” they said.

That’s the message also from Oxfam Australia CEO Lyn Morgain, whose organisation is dealing with the “devastating” decision of having to halve its 185 workforce in coming months after the recent bushfires and now the pandemic exacerbated ongoing funding concerns.

Australia has yet to announce whether it will contribute to the UN’s urgent appeal for $US2 billion in humanitarian aid globally for the pandemic. Nor has the Government responded  to calls from agencies like Oxfam and the UN  to provide debt relief to countries struggling in the pandemic.

Oxfam Australia has suggested Australia’s “fair share” of the UN appeal would be about $85 million.

That’s a splash in the ocean compared to its $130 billion pandemic package rolled out by the Federal Government to support lives and livelihoods here.

But there are concerns that countries like Australia will see foreign aid as an easy target when they look for drastic cuts in spending to compensate for the huge pandemic costs.

As well as striking a humanitarian blow, Morgain told Croakey  that would be a “false economy”.

With the coronavirus, she said, countries may want to focus on global humanitarian issues or only on themselves. But either way, she said, the response should be the same.

“If we don’t contribute to the global effort, we will pay dearly for it in our inability to contain the pandemic and that will have long term social and economic consequences, we know already, for all of us.”