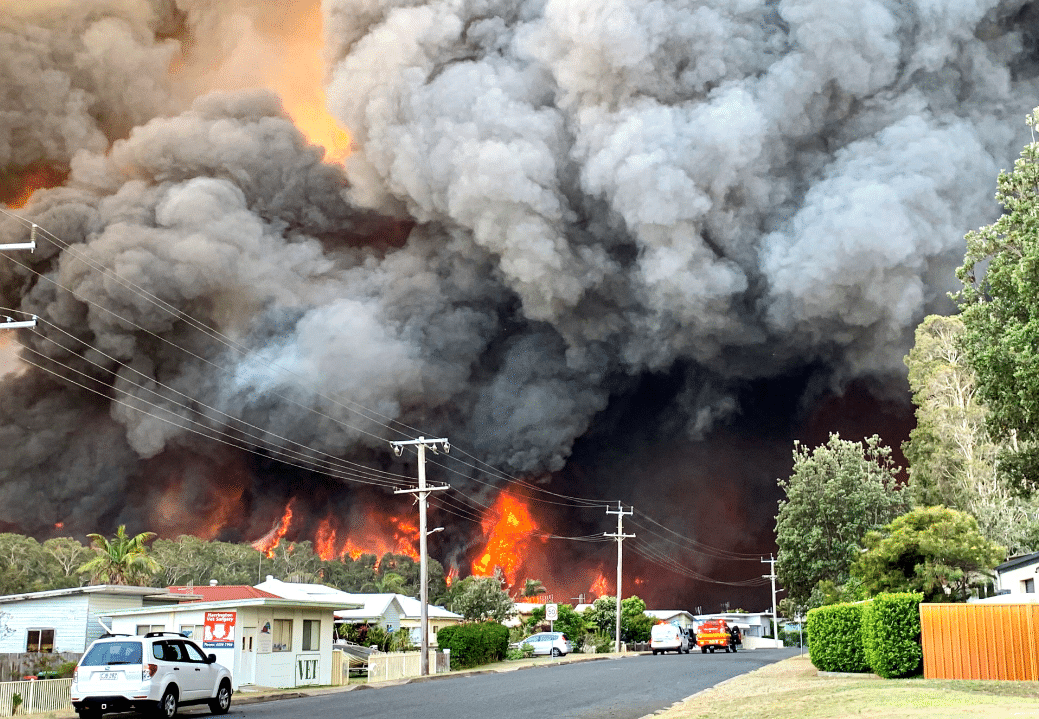 Introduction by Croakey: While there was deep criticism of the failure of the Australian Government, and particularly Prime Minister Scott Morrison, to show leadership during the 2019-20 bushfire emergency, NSW Rural Fire Service Commissioner Shane Fitzsimmons stood out for his positive role.

As a fire fighter, Fitzsimmons was backed by a well-developed process of emergency warnings which, according to Ian Mannix in the post below, should have been adopted by Australian health authorities in seeking to alert Australians to the risks and impacts of the ongoing coronavirus pandemic.

Mannix is a former newspaper, radio news and current affairs journalist and manager who has been widely recognised for outstanding public service in establishing and managing the delivery of the ABC’s emergency broadcasting service.

He says health communicators should follow trusted methods of warnings and other communications, developed through Australian natural disasters, to improve our response to pandemics and other hazards to save lives.

Australia is experiencing its worst natural hazard since Black Saturday in February 2009, with almost 7,000 confirmed cases of COVID-19 and more than 80 deaths.

And yet there have been no warnings.

A “warning” is a quite distinctive message, headlined as such, emanating from a source recognised for issuing warnings, in a format which attracts immediate attention, and providing information to enable the recipient to respond immediately to save lives or reduce property loss.

Warnings for bushfire, flood, cyclones and heat health are all regularly issued by the fire agencies or Bureau of Meteorology and, in response, we stop, listen, and take action.

We know there is a website with the full detail of the warning, and we know the warning will be updated and reviewed until the threat is over.

But we do not get health “warnings”.

Instead, health departments put out “information alerts” online, mostly to doctors. Apart from when the more sensational ones such as Legionnaires, Poisonous mushrooms, Salmonella are occasionally picked up by the media, we rarely hear about them and few people know the sites exist in every state, such as Victoria, NSW, Queensland and South Australia.

This is a failure of federal and state health department planning and, although Australia has a low number of COVID-19 cases by world comparisons, it could have been worse, and it can be argued that the lack of a health warning system may have led to unnecessary deaths and injuries.

The people who came off the Ruby Princess it seemed did almost nothing in response to their risks.

But a warning that they might have contracted a deadly virus and be spreading it to their family and friends might well have motivated them to take action.

Planning for the next pandemic

In preparation for the next pandemic steps should be taken to ensure we are warned next time.

Australia has very good warning procedures. Health authorities and political leaders know this and decided, for reasons known only to them, to ignore Australia’s trusted hazard warning systems in favor of advertising, public and media relations and marketing.

This statement is likely to irritate all those involved with the Federal and State government information campaigns, which have cost the Federal Government alone $30 million. But the reality is, if it’s not called a warning, and doesn’t immediately change attitudes and behaviours, it isn’t a warning. 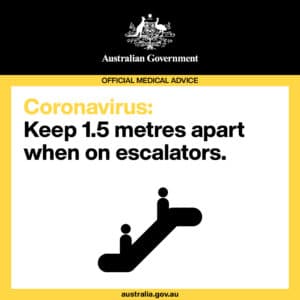 Initially, although too late, Australian health authorities provided information including for travellers, ‘feel good’ mental health campaigns and graphics which unfortunately at times were bewildering.

The initial advertisements did not mention the impact of the virus, or that it would kill us. It often referred to “saving lives’” but even now, three months after the outbreak, advice on TV says: “For most, the virus will be mild.’’ It’s the equivalent of a bushfire emergency warning which says: “In a bushfire, most people will be safe or suffer minor damage to their homes.”

We were told the COVID-19 information was issued by “The Australian Government’’, a somewhat nebulous entity often associated with partisan politics (and used brilliantly by satirical producers “The Juice”, which had the most effective coronavirus alerts of all.)

The images of hundreds or thousands of people milling on Bondi and St Kilda beaches, showed the aim of the messages – to share responsibility and get people to stay at home – did not work. This was not shocking. People were putting their own understanding on what they were being told – they were personalising, localising and adding context.

In these earlier days of restrictions, when they sought ‘validation’, they discovered the Prime Minister was going to the footy; some businesses were shut while others remained open, and authorities were specifically encouraging them to exercise in parks.

And they quickly discovered, because health authorities were telling them, there were no cases of localised transmission.

The Prime Minister was furious – “Stop it, just stop it”, he said, like a father trying to change the behaviour of an annoying child. That didn’t work either.

The failure to communicate effectively exasperated public health ethicists who wrote at Croakey:

We need to change our thinking and communication, urgently.

In our view, we urgently need to start emphasising …‘’public’’ values.

We need to show people ‘how’ to change their behaviour to reflect these values, and tell them ‘why’ they should do this.’’ 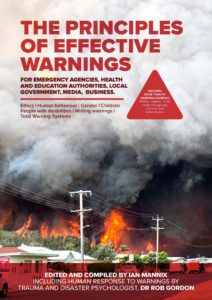 They suggested “solidarity and reciprocity” — phrases and statements which I immediately took and included in my new book,  The Principles of Effective Warnings, where their insights added value to the theory and practice of effective communications around natural and man-made hazards.

The book provides a foundation for training people who have responsibility for keeping people safe and reducing economic loss – health and education agencies, emergency responders, NGOs, local government and business.

The “warnings pathway” in the book is based on research from two eminent US behavioural analysts – Dennis Mileti and John Sorenson – as well as my experience  in setting up and managing Emergency Broadcasting on ABC Radio, and the clinical experience of well known Australian trauma psychologist, Dr Rob Gordon.

The research into warnings has nearly 40 years behind it and started with Mileti and Sorensen.

Mileti, Professor Emeritus at the University of Colorado at Boulder, where he served as Chair of the Department of Sociology and as Director of the Natural Hazards Center for the US, came to Australia in 1994 to talk to emergency agencies about their work and he told me he is bewildered by the fact that their work was then ignored.

The Principles of Effective Warnings contains extensive references to the Australian Institute for Disaster Resilience (AIDR), which last year issued Australian Warning Principles to guide the development and use of warnings in Australia.

AIDR has done a great deal of work on warnings, often with the Bushfire and Natural Hazards Cooperative Research Centre.

Among elements of warning that we know must be included to change attitudes and behaviours in a timely way, which would have improved the COVID-19 health warnings, are:

If health authorities followed the lead of emergency agencies, they will have legislated responsibility to issue “warnings”, through trained and independent ‘’warnings experts’’ operating outside politics, who would issue warnings when they were needed, in all demographic groups, multiple languages, and repeatedly and for as long as required.

The warning team would have at its disposal feedback mechanisms to ensure the warnings were reaching their target audience, in a timely way, and with desired impact.

Imagine if each day during the bushfire crisis we only got information from news conferences with a multitude of mainly men fronting the TV cameras a couple of times a day.

This is in effect what occurred with COVID-19.

The information flow was relying on daily news events headed by the Prime Minister with the Chief Medical Officer Professor Brendan Murphy. They relied on the media to broadcast the news conferences – but only News24 and Sky News broadcast them – and for the main takeaway messages to be broadcast in news bulletins and newspapers the next day.

Another significant advantage of the official emergency warnings process is that “official warnings” issued by acknowledged agencies are carried on ABC radio and News 24 TV, commercial radio and online and Sky News for free.

In the case of the ABC, it has an “emergency broadcasting policy”, which means it will issue all warnings, repeatedly and for as long as necessary, for free.

Health authorities should follow the lead of the emergency agencies and create an independent well-resourced warning capacity to save lives in future outbreaks and epidemics.

Ian Mannix is a journalist, and former Manager of Emergency Broadcasting and Community Development at ABC Radio. He developed the ABC’s world leading Emergency Broadcasting Policy and coordinated the issuing of every warning in Australia on ABC Radio 2006-2017 – including floods, cyclones, fires, storms, H1NI, equine flu and an outbreak of locusts in the west of Victoria and NSW.

Mannix is now the director of “Forewarned’’ which specialises in integrated emergency warnings for governments, health and education authorities, NGOs, and business in the Asia Pacific region. He has just self published ‘’The Principles of Effective Warnings.’’