Home Public health and population health health inequalities Playing with the Trump card: health has champions to stay the game 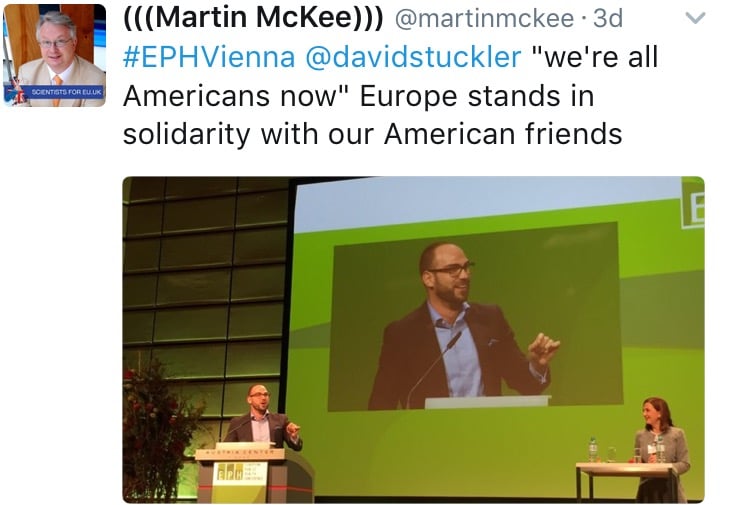 Playing with the Trump card: health has champions to stay the game

Where were you when you realised, for certain, that Donald Trump had been elected as the 45th President of the United States of America?

Public Health Association of Australia CEO, Michael Moore was in Vienna, attending the 9th European Public Health Conference with public health leaders from all around the world.

In the post below, Moore describes the group’s response to the surprise election result, and reminds us that now more than ever, the world needs people who are prepared to work together to champion health.

At a meeting in Vienna at the time of the Trump victory, Richard Horton challenged a despondent group of international public health professionals to set an agenda for the incoming administration.

Horton is the editor of The Lancet, one of the most prestigious medical journals in the world, and is known for challenging the status quo. The challenge was issued even prior to revelations that Trump policies may be “different from the election rhetoric”.

The challenge by Horton was for health leaders to develop a public health manifesto in the period prior to the swearing-in of the President-elect.

In reality, such agendas should by supported by all international organisations and all people of good social conscience who are concerned about divisiveness, inequity, misogyny, ignorance, hate, racism, marginalisation and persecution of minorities.

Parallel to the Horton challenge was a reminder from Oxford University Professor David Stuckler (an American) who reminded those health professionals in Vienna and around the world of Edmund Burke’s comment “All that is necessary for the triumph of evil is that good men do nothing”.

The reason for developing and demanding a positive agenda was reinforced within hours by a report in the Washington Post. Journalist Jose DelReal expounded “Trump built his campaign message around bold vows to, among other things, force Mexico to pay for a massive border wall, fully repeal the Affordable Care Act and ban Muslims from entering the United States. But in the days since his upset election victory, he or his advisers have suggested that those proposals and others may be subject to revision”.

Of particular interest to health professionals who believe in the principle of universal healthcare, and who recognise that under President Obama Obama’s health-care law over 15 million people, who would otherwise be excluded, now have access to treatment, DelReal reported “Trump said in an interview with the Wall Street Journal on Friday that he would like to keep some parts of the law intact and may seek to amend the statute rather than repeal it”.

Although the Trump victory was surprising to so many Americans and to the the world, there were some who predicted the possibility of this phenomena.

Naom Chomsky, as far back as April 2010, told TruthDig “The United States is extremely lucky that no honest, charismatic figure has arisen. Every charismatic figure is such an obvious crook that he destroys himself, like McCarthy or Nixon or the evangelist preachers. If somebody comes along who is charismatic and honest this country is in real trouble because of the frustration, disillusionment, the justified anger and the absence of any coherent response.”

Chomsky painted a picture of the rise of a fascist regime: “What are people supposed to think if someone says ‘I have got an answer, we have an enemy’? There it was the Jews. Here it will be the illegal immigrants and the blacks. We will be told that white males are a persecuted minority. We will be told we have to defend ourselves and the honor of the nation. Military force will be exalted.”

The prediction of Chomsky carries a warning for the rest of the world. “And if it happens it will be more dangerous than Germany. The United States is the world power. Germany was powerful but had more powerful antagonists. I don’t think all this is very far away. If the polls are accurate it is not the Republicans but the right-wing Republicans, the crazed Republicans, who will sweep the next election.”

A manifesto for health

Back at the conference, Stuckler attempted to put things in perspective as to the possible outcomes with a comparison of three populist candidates from the past.

The first he saw as the possibility of a minimalist outcome with a presidency similar to the other American celebrity politician, Arnold Schwarzenegger. Whilst ‘the governator’ was popular he was responsible for so little change that his term was harmless.

His second example was the somewhat more distressing case, of the  corruption associated with the womanising Italian Prime Minister, Silvio Berlusconi.

Taking a positive stand when concerned about an electoral outcome is the real message from Richard Horton and David Stuckler. Democracies are not just about elections.

The European and World Public Health Associations have committed to writing the manifesto and The Lancet to publish it. There are many forms of people power that can have a major impact on even the most strident of politicians.

This article was originally published with the title, Good men challenged to do something at CityNews. Re-posted here with thanks.