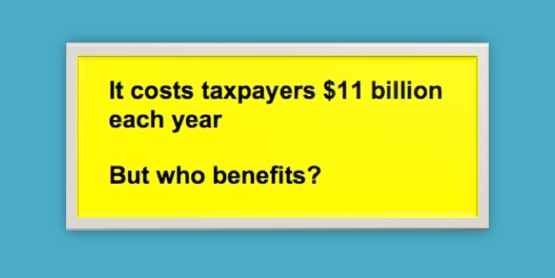 Please read this, before completing the Government’s survey about private health insurance

But this is not the full picture.

According to calculations by policy analyst John Menadue, the industry’s total cost to the budget is $11 billion in 2015-16, covering direct outlays and revenue foregone (for example, through exemption, particularly for those with high incomes, from the Medicare Levy Surcharge). For more detail, see his article from 19 November, Facts on the $11b per annum private health insurance industry subsidy.

As well as these costs, Menadue argues that the public subsidy of the PHI industry has other significant social and economic costs, including increasing the charges of doctors and private hospitals. He says:

If individuals want private health insurance to get privileged access to private hospitals that is fine. But there is no reason why taxpayers should be paying $11 billion per annum for an inefficient and inequitable insurance system.

To those costs can be added the expense of commissioning Orc International, a “leader in the art of business intelligence” to conduct a survey of the public’s attitudes about PHI.

The survey reads as if it was written by the private health insurance industry.

There is no mention of how public subsidies of private health insurance contribute to inequitable access to healthcare, at a time when the industry made profits of around $1 billion last year, as outlined at Inside Story by Associate Professor Lesley Russell.

Nor does the Government’s survey mention how public subsidy of the PHI industry is an example of structural discrimination against Aboriginal and Torres Strait Islander people.

As Dr Katrina Alford wrote recently in The Medical Journal of Australia:

Meanwhile, in the article below, Leanne Wells, CEO of the Consumers Health Forum of Australia, writes that “the rationale for industry assistance for the private health sector is wearing thin”.

Health insurance: tell us what you really think

It’s a reasonable question to put to Australians right now, given the far-reaching implications for health consumers and Australia’s taxpayers.

For us at Consumers Health Forum, the health insurance issue is obviously a matter of deep importance. Many of our supporters and stakeholders are affected by chronic illness and may, if they can still afford it, be heavily dependent on private hospitals and allied health providers.

The Consumers Health Forum is exploring the opinions of consumers on the matter by way of a survey it commissioned, which consumers can access here.

As it happens, the Health Minister, Sussan Ley, announced soon afterwards that the Government was also gauging the public’s view by way of a survey, which is available through its consultation page.

CHF wants to attract a broad range of respondents to its survey to reflect and report a balanced view on issues around private health insurance.

We expect that many will support the rebate because it supports their ability to have private health insurance. It is important that we attract and understand their views, as they stand to be as impacted by insurance reforms as policy holders.

Equally we cannot forget about those who don’t have health insurance but contribute to the rebate through their tax.  It is important we attract their views too.

Why don’t they have insurance and what are their attitudes to the overall question of whether the community and health system as a whole, gets value from the current arrangements?

But after 16 years of above-inflation increases in premiums virtually every year, and the accompanying shrinking in health policies, the rationale for industry assistance for the private health sector is wearing thin.

As some have pointed out, the cost of the health insurance rebate — between $6 billion and nearly $8 billion depending on how it’s measured — now equals the total cost to Medicare of GP benefits.

And that neatly encapsulates the sort of issues that Australia needs to assess if we are to develop a better, more cost effective and equitable health system, particularly at a time when the Minister herself is giving attention to ways of reforming primary health care to counter chronic illness.

CHF’s concern is that Sussan Ley’s review into health insurance is isolated from the overall health system, despite playing a substantial part.  The review is limited to dealing with health insurance alone, with little or no scope to assess the elephant in the room — the rebate.

The Consumers Health Forum is hoping that its survey will help steer scrutiny towards that elephant.

• Leanne Wells is CEO of the Consumers Health Forum of Australia

• Why bother trying to make private health insurers do what Medicare does: Ian McAuley at The Conversation