Home The Croakey Archives Croakey projects archive #JustJustice Prison is not the answer. Instead, address the needs of traumatised Aboriginal women 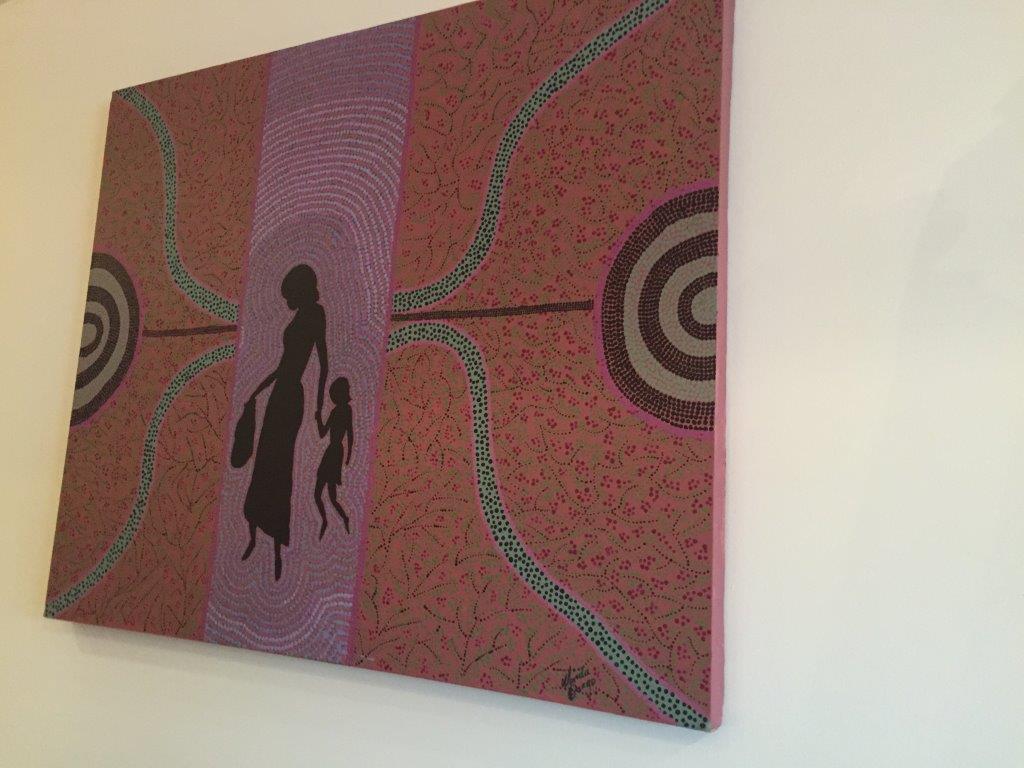 This painting, by Wanda Braybrook (mother of Antoinette Braybrook), is in the foyer of the Aboriginal FVPLS Victoria office.

Prison is not the answer. Instead, address the needs of traumatised Aboriginal women

In the first of a three-part series on #JustJustice issues in Victoria, Marie McInerney investigates the urgent need for action to address the rising rates of Aboriginal women going to prison, the majority of whom have experienced family violence.

Aboriginal and Torres Strait Islander women should only be jailed as a matter of last resort because of the devastating impact this has on families and children, according to a leading Aboriginal advocate. 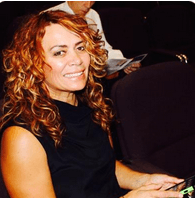 While Aboriginal women are the fastest growing group in Australia’s prisons, their numbers are actually still low enough – less than 50 in Victoria’s prisons – that it should be possible to provide individually tailored alternatives to incarceration.

“A good starting point would be to not put any Aboriginal women in prison because of how much that destroys family and community; one day in prison can cost an Aboriginal woman her life, her children, her home and her family,” says Braybrook.

The legal system also has to learn how to take into account the high levels of family violence experienced by Aboriginal and Torres Strait Islander women prisoners, and its connection with criminalisation and incarceration rates, she says.

Asked what mainstream organisations can do better in the #JustJustice space, Braybrook said a commitment to ongoing cultural awareness training for staff is a basic need.

But she also wants them to “work hard to build relationships with organisations like ours”, rather than trying to build their own business cases. She said:

“Don’t just want something from us, give us something.

A good starting point would be to just understand that all Aboriginal people have had really bad experiences with mainstream organisations and white authorities.

We always say: ‘refer Aboriginal people to an Aboriginal organisation and support that organisation to provide that additional support to the woman, rather than try to get your own numbers up.'”

Braybrook is an Aboriginal woman, born on Wurundjeri country in Melbourne, who was prompted to study law by the racism experienced by her family in suburban Melton as she grew up. She was formerly an Executive Officer of one of nine Victorian Regional Aboriginal Justice Advisory Committees, formed out of the work of the Royal Commission into Aboriginal Deaths in Custody.

The FVPLS was one of a range of organisations that endorsed a submission to the Victorian Royal Commission into Family Violence by Flat Out, a statewide advocacy and support service for women who have had contact with the criminal justice and prison system.

It focuses on the experiences of criminalised women – those who have been imprisoned, in contact with police or who engage in criminalised activities such as illicit drug use or sex work, and how existing police approaches to family violence are failing them.

“Research reveals that the overwhelming majority of women in prison have experienced family violence. Our case studies further suggest that family violence is a contributing factor to many women’s imprisonment.

The failure of government and society to recognise this and instead to focus on women’s criminalised behaviour and consequent punishment, serves to compound the trauma these women have experienced.

Imprisonment further disrupts the lives of women and children who have experienced or are experiencing family violence. The trauma of imprisonment will be endured and carried with them throughout their lives.”

Braybrook says a big priority is to provide a safe place – physically and culturally – for Aboriginal women after prison, so they don’t reoffend or breach parole, like the Wulgunggo Ngalu residential diversion program for Aboriginal men, which a Corrections evaluation found is “widely valued and supported throughout the justice system”.

The culturally safe regional facility run by her brother Shaun Braybrook was set up to address high breach rates for Aboriginal men who are on community correction orders. It was also recommended as a model to halt high recidivism rates for Aboriginal women in Unfinished Business, the 2013 Victorian Human Rights and Equal Opportunity Commission (VHREOC) report on Koori women and the justice system.

“The really important thing about Wulgunggo is the programs are around culture, identity and Aboriginal men’s role in communities. And it’s been so successful.

They’ve got different units set aside so men’s families can come down, link them into stuff in communities when they’ve completed their order. That’s the kind of thing we need for women so they can have their children with them.”

Like Aboriginal men, many Aboriginal women ‘cycle’ in and out of prison, often for minor crimes or justice breaches, and routinely miss out on pre-prison diversionary options even when they are first-time offenders.

Many are also denied bail because of a chronic lack of safe and secure accommodation to which they can be bailed. This has led to an escalating number of Aboriginal women entering prison on remand. In 2012, of 67 Koori women on remand in Victoria, 60 per cent were released without being sentenced.

Braybrook says this is not a new issue as it is in the rest of the Victorian prison system. For Aboriginal women, it’s been going on “for years” for a range of reasons, including racist attitudes in policing.

“One thing we think contributes is the lack of legal representation for Aboriginal women – they haven’t got an advocate.

The data tells us that Aboriginal women are the most legally disadvantaged group in Australia and that contributes to why they are the fastest growing prison population.”

That’s only been made worse by the funding uncertainty undermining that support nationally, since Family Violence Prevention Legal Services (FVPLS) lost status as a stand-alone program – the basis on which it had operated for the last 16 years – under the Federal Government’s new Indigenous Advancement Strategy.

The 14 FVPLS services across Australia won a reprieve in March this year, but some were granted only 12 months funding, and there is no CPI indexation or opportunity for increased funding across the terms of contracts.

“That puts a lot of pressure on our budgets and capacity to retain specialist staff. The uncertainty leading up to the decision also impacted strongly: we lost some staff and had to be very careful about how many clients we took on in case we couldn’t support them in the longer term,” Braybrook said.

Funding cuts have also hit the highly regarded Sisters Day Out and Dilly Bag initiatives, which have ‘pampered’ about 7,000 Aboriginal women across Victoria over the past seven years, and delivered targeted family violence information and support, including to women in Melbourne’s Dame Phyllis Frost maximum security prison.

“Everyone talks about how wonderful this program is, how successful it is,” Braybrook says of Sisters Day Out. “It’s a proven success but we’ve been ‘piloting’ it for 7 years and now we’ve run out of funding.”

There was further disappointment last month that the family violence package announced by new Prime Minister Malcolm Turnbull did not include a focus on improving access to frontline legal services for Aboriginal and Torres Strait Islander women.

In a statement, Braybrook outlined how family violence impacted on Aboriginal and Torres Strait islander people “at vastly disproportionate rates and has devastating impacts”.

Braybrook said up to 90 per cent of Aboriginal women in prison have experienced family violence and many are in prison because of crimes that relate to homelessness and financial hardship.

The FVPLS submission to Victoria’s Royal Commission into Family Violence says that while family violence victimisation is not a direct cause of Aboriginal women being jailed, “it is a precursor to a range of conditions that lead to imprisonment”.

It says its work in Victorian Aboriginal communities for the last 12 years confirms a New South Wales study in which over 80 per cent of female Aboriginal prisoners reported that their incarceration was an indirect result of their victimisation.

Women who have been to prison also struggle to later get support not just from police, but also from the mainstream family violence sector, she said, pointing again to the submission to the Royal Commission from Flat Out, that says:

“Family violence services often have refused support for criminalised women based on the assumption that they are too difficult, pose a threat to other women, a threat to the service model of high security, or present with a complex range of support needs to which services feel unable to appropriately respond…

Braybrook says that’s why dedicated Aboriginal legal services and programs like Sisters Day Out are so important.

“Sisters Day Out lets us take our organisation and many others to communities, there’s no expectation that women will walk through the door and report violence,” she says.

“For me, being an Aboriginal woman, I’m contacted all the time on Facebook and the phone. When women come to see us they know they won’t be judged; we understand why they haven’t reported (violence) and why it’s difficult for to leave their community.”

Flat Out echoes Braybrook’s call for an end to imprisonment for vulnerable women, saying prison replicates all the features of family violence and often re-traumatises women.

“The prison therefore cannot serve both punitive and therapeutic purposes because these goals are antithetical. The prison’s primary focus is security, not therapy.

Prison compounds women’s systemic disadvantage….specialist support for criminalised women should be provided in the community and there should be a targeted reduction in the numbers of women imprisoned in Victoria.”

Coming up next in the series:

• Findings of the Ombudsman’s investigation into rehabilitation prospects in Victoria’s overcrowded prisons
• The Koori cultural program for young Aboriginal people in the Melbourne Youth Justice Centre at Parkville.