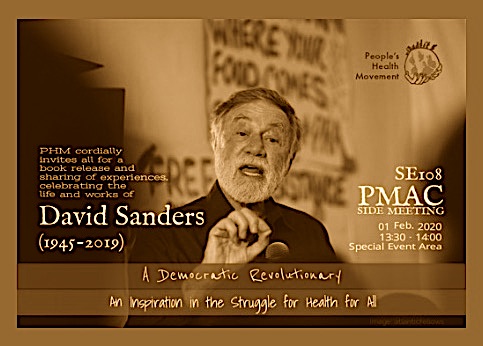 Recent research on the strategies and insights of global health activists in making change happen in population health and primary health care, as profiled in Croakey, included contributions from University of Western Cape researcher Professor David Sanders, who sadly passed away in 2019.

He is remembered as a humble, visionary public health activist mainly in Zimbabwe and South Africa. His impact was also global, mentoring and collaborating with many activists, health workers and researchers in numerous countries, including Australia’s Professor Fran Baum.

Professor David Sanders died suddenly on 30th August last year. His death led to an outpouring of grief and a celebration of the enormous contribution David had made to global health throughout his life.

Central to these achievements was his role as a founder of and inspiration to the People’s Health Movement (PHM). At the time of his death David held the position of Co-Chair of the Global Steering Council of the PHM.

Our movement is spread across the globe and we had not had a chance to collectively celebrate David’s life and commitment to the struggle for health until we met at the Prince Mahidol Award Conference (PMAC), held in Bangkok from 28 January – 2 February.

PMAC has been described as the Davos of global health and its special theme this year was on Accelerating progress towards Universal Health Coverage.

David had attended PMAC conferences since its inception in 2007 and often represented the People’s Health Movement on its International Organising Committee and Scientific Committee. His perceptive and hard-hitting comments about the ways in which political and economic matters affect health made their mark on PMAC delegates. So it was not surprising that the PMAC made a space in their schedule for a memorial session for David.

Many delegates attended and when the audience was asked if they had been inspired by David, nearly everyone raised their hand. Dr Suwit Wibulpolprasert, a very senior Thai health policy expert, spoke of how David had changed his life in four areas after he met him in 1995.

These were that he gave him an understanding of the geopolitics driving health; made him understand the human rights approach to health; inspired him to speak up at global health forums; and gave him the courage to be a trouble maker for health.

Dr Suwit’s points will have resonated with many people who had been inspired by David. He also made a surprise announcement that he was donating $10,000 to PHM to be used for a David Sanders scholarship for a young person under 25 to attend PMAC and make an active contribution.

Dr Suwit also encouraged others to submit to the scholarship fund so that there would be more “troublemakers for health”.

Maria Zuniga spoke of David’s work in the 1970s and 1980s when they had both been involved in national liberation struggles and saw primary health care as a vital part of the struggle for liberation. Together they were part of the group that founded the International People’s Health Council which become one of the founding networks of the People’s Health Network.

I spoke of David as an activist academic who excelled in the formal aspects of an academic’s role – teaching and research but who only saw these as a route by which he could advocate for a fairer and healthier world. His role in building public health teaching and research in Africa was huge and is best expressed by his leadership of the School of Public Health at the University of the Western Cape in South Africa.

David published two books which have had a huge impact. Firstly, The Struggle for Health which provides a forensic account of why a political economic understanding of health and medicine is vital and which many people credit with making them take up a career in public health rather than clinical medicine.

Secondly, Questioning the Solution (which David co-authored with David Werner) promoted the value of comprehensive primary healthcare for children’s health in particular. David was also one of the editors and main contributors to each of the five editions of Global Health Watch, which is an alternative World Health Report.

David’s academic and activist work contributed to each of the following areas:

Hani Serag described David’s central role in forming and inspiring the global People’s Health Movement, including his role in drafting the People’s Health Charter (which has been translated into more than 40 languages). He stressed David’s ability to simplify complex ideas and his continual questioning of who benefits from any particular situation or policy.

Above all, Hani described David as a movement builder who would meet someone interested in PHM and then invest time in mentoring them and encouraging them to build PHM country circles. He is an important part of the reason that PHM has a presence in over 80 countries.

Bridget Lloyd, who is just finishing a ten-year term as Global Co-ordinator of PHM and was based in Cape Town and worked closely with David, chaired the event. She stressed the generous way in which David coached and mentored people.

As she said, he “imparted so much to so many”. The memorial concluded with the launch of a memorial book of readings by David, miraculously produced by PHM India within a couple of weeks.

All the qualities of David described at this global meeting were also celebrated at a PHM workshop held in September just a few weeks after his death but instead of him giving the keynote speech (the event had been planned around a visit from David), tributes were paid.

Most strikingly, Donna Ah Chee, Stephanie Bell and John Boffa spoke of the way in which David had encouraged the development of the Central Australian Aboriginal Congress, a community-controlled Aboriginal Health Organisation.

They made tribute to the way in which he had visited Congress and spoke of what a truly comprehensive PHC service looked like and of his role in inspiring and encouraging the service to keep striving to develop such a service.

David Sander’s contributions were also recognised by The Lancet in both an obituary and a tribute from the People’s Health Movement and by an obituary in the BMJ.

David has been an important mentor for me by showing what the role of an activist academic looks like and encouraging me to devote time to activism as well as research.

He often decried the trend in academia to rarefy peer-reviewed publications that do little to challenge the status quo which is driving power imbalances and health inequities.

His work was firmly grounded in unfashionable Marxist philosophy, which he used to uncover the ways in which a ruling class uses its power to extend and deepened its privilege through exploitation of the world’s working class and to the detriment of their health. I know he was encouraged by the increasing voices of discontent at the existing world order.

For David a fair world will be reached when people take power away from those who exploited them and the environment. Only through people’s struggles will a better, fairer and healthier society be achieved.

His legacy is one that the world needs now more than ever: recognising that optimism is a political act and inspiring people to be active and courageous in their opposition to the unfair global economic and political order.

Our challenge in the progressive health movement is to an ensure that the democratic struggle to achieve David’s vision is strengthened and intensified. In Bangkok, the People’s Health Movement’s long term and newer activists committed to that challenge using David’s legacy as our inspiration to build on and continue his life’s work.

You Tube clips of tributes paid at the South Africa Memorial for David can be viewed below.

Professor Fran Baum is a Matthew Flinders Distinguished Professor of Public Health and Director of the Southgate Institute of Health, Society and Equity at Flinders University 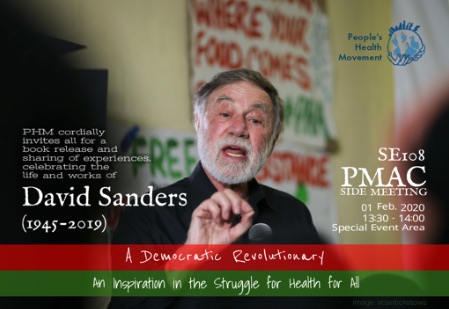