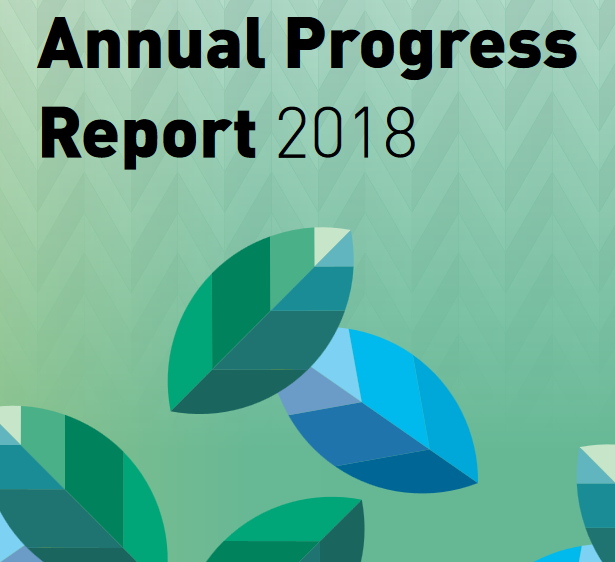 Progress on child sex abuse reforms, but what about redress & detention?

Significant progress is being made across Australian governments and in some institutions to implement the recommendations made by the Royal Commission into Institutional Responses to Child Sexual Abuse, according to a raft of reports released late last year.

That included the National Apology given to victims and survivors of institutional child sexual abuse by Prime Minister Scott Morrison in October last year.

However, as this Guardian Australia story outlines, much progress still depends on whether all accountable institutions sign up to join the National Redress Scheme and make it as easy as possible for survivors to obtain compensation for the deep harm inflicted on them.

Lawyers and advocates are concerned that the scheme in its current form is “unjust and damaging“, one that “re-traumatises many victims and is a shamefully adulterated version of what was recommended” by the Royal Commission.

The challenge is also on multiple health and social sector organisations and institutions to address ongoing risks to children in their care through trauma informed work, and to also be transparent and accountable.

And the Australian Government must also be held accountable for the fate, safety and wellbeing of children being held in offshore immigration detention on Nauru – which the Royal Commission was unable to investigate.

Reporting on its responses to date to the Royal Commission, the Federal Government says it is making progress on making detention environments safer for children, but the next test of that will be next month when Parliament resumes and will face the delayed vote on the Urgent Medical Treatment Bill proposed by Independent MP Professor Kerryn Phelps.

Amid deep concern by health professionals about the mental and physical health of children on Nauru, including those who have experienced or are at risk of sexual abuse, it seeks the immediate transfer of the remaining children and their families to Australia and to streamline urgent medical transfers for adults on both Nauru and Manus.

As Victoria’s Commissioner for Children and Young People Liana Buchanan pointed out on ABC Radio, the Royal Commission did not recommend a national public register for child sex offenders, but that was put firmly on the agenda in the lead up to the 2019 federal election on Wednesday by Home Affairs Minister Peter Dutton, sparking much debate on its potential benefits and risks.

The Federal Government tabled the first Annual Progress Report in Parliament on December 14, meeting its commitment to annually highlight the progress being made under its jurisdiction to implement the recommendations made in the Final Report of the landmark five-year Royal Commission into Institutional Responses to Child Sexual Abuse, made public in December 2017.

A joint statement from Prime Minister Scott Morrison, Attorney General Christian Porter and Families and Social Services Minister Paul Fletcher said progress to date has been “significant” but acknowledged “there is still much more work to be done”. It said:

“Action is being taken on all recommendations where the Australian Government is responsible, with work continuing in partnership with states and territories to ensure children are safe from abuse in institutional care.”

It groups its responses under five key themes (see diagram below) and listed key achievements as including: 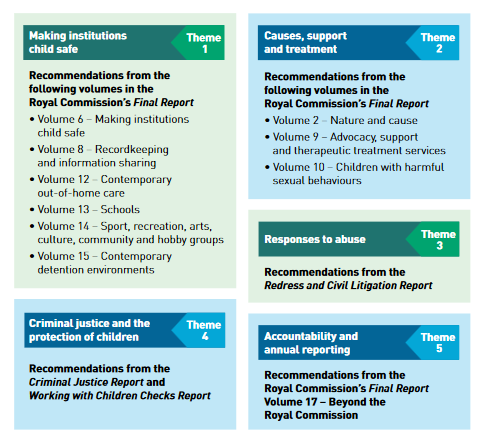 The statement urged all institutions from which the National Redress Scheme has received applications to sign up urgently, saying they need to “meet their obligations”.

States and territories have also committed to reporting progress each year on implementing the recommendations. The following were published late last year (we will update the list as more are published):

Churches, other institutions also to report

“While acknowledging that there is much more work to be done, the first annual report outlines a series of actions taken during the past 12 months – indeed, over the past three decades – and signals the determination of the bishops and religious leaders to do what is required,” said Archbishop Mark Coleridge, president of the ACBC.

The ACBC statement said the report also explores the Church’s engagement with the National Redress Scheme, in which 27 of 35 archdioceses, dioceses and eparchies are now participating, and which the first religious order has now joined.

More dioceses and religious institutes are currently having applications to join the Scheme processed by the Department of Social Services and are expected to join in the coming months, it said.

It said that as part of the ongoing work to address child sexual abuse in Catholic settings,  Coleridge will attend a gathering of the presidents of episcopal conferences from around the world at the Vatican in February.

“He said Pope Francis’ decision to hold such a rare gathering demonstrates the urgency of the issue internationally, but he acknowledged that action – not more talking – was what was needed from the meeting,” the statement said.

The Federal Government said it supported the recommendation but is not able to require that these groups, that were each subjects of the Royal Commission’s hearings, do so.

The National Progress Report said the National Office for Child Safety is also assessing which other institutions and peak bodies are in scope for reporting in 2019, including:

Looking Where the Light is: healing the scars of institutional sexual abuse will take courage and commitment: Richard Weston, Healing Foundation

Why children in institutional care may be worse off now than they were in the 19th century: The Conversation